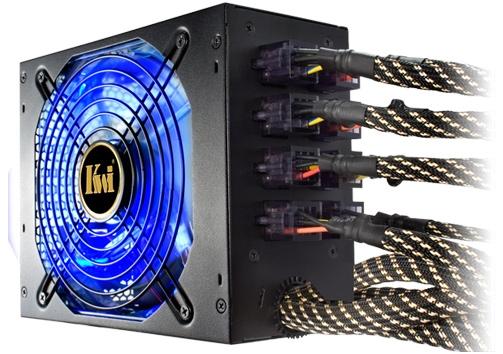 Now that we have taken an in-depth look at one of the most efficient offerings from Kingwin with the Lazer Platinum 550W power supply, we are taking a look at something a little more enthusiast related in terms of overall output this time. The unit on the test bench today is the Kingwin LZG-1000. It is a 1000W power supply capable of delivering power with 80Plus Gold efficiency.

The LZG-1000 features a mix of native and modular cabling that should allow you to easily power all but the most power hungry multi-GPU systems. Let's start taking a look at some of the specs of the LZG-1000.

Kingwin's LZG-1000 is capable of outputting 99% of its power on the 12V rail. The unit features a single 12V rail rated for 83A. Both the 3.3V and 5V rails are rated for 24A each with a combined total output of 120W. Add in the -12V and 5VSB and you've got a total combined output of 1000W. While the minor rails may be enough for most modern days systems, those who choose to utilize the LZG-1000 in an older system that relies on a lot of 5V power might want to be a little careful here. 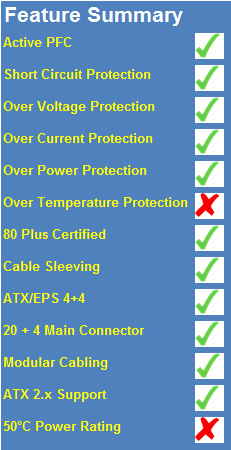 The Kingwin LZG-1000 doesn't quite offer the complete list of features that we check for, but it does manage to hit a large majority of them. Of the protections we check for, the LZG-1000 doesn't provide anything for over temperature situations. It also isn't rated for 50C, but instead a rather modest 40C. Other than those two things, it has our feature list covered with the fully sleeved native and modular cabling, 80Plus Gold certification and lots of protections.

Kingwin's LZP-1000 is readily available at just about any place you'd like and lists with an MSRP of $189.99 (the same as what Newegg is asking for it). That isn't the cheapest that you can get it. As usual, some quick searching will yield a much lower result. This time around we were able to find it for $170 at Overstock.com. Kingwin backs the LZG-1000 with a 3-year warranty. It's a shame there isn't a longer warranty on the unit. 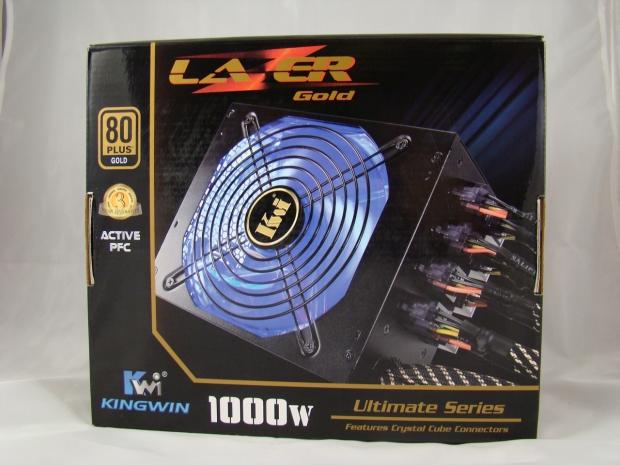 Both the front and back of the packaging display the same information, but with a slightly different picture of the power supply itself. 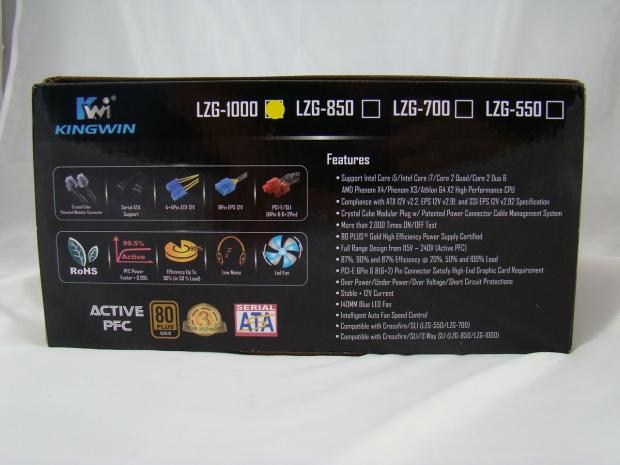 Kingwin has moved all the features of the unit to one side of the box. 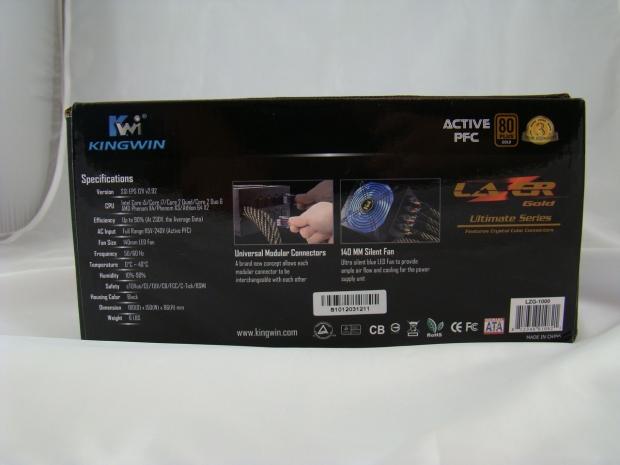 The other side of the box has a few more features and a bunch of specifications. It is nice to see some packaging that is rather simplistic, yet informative at the same time for a change. 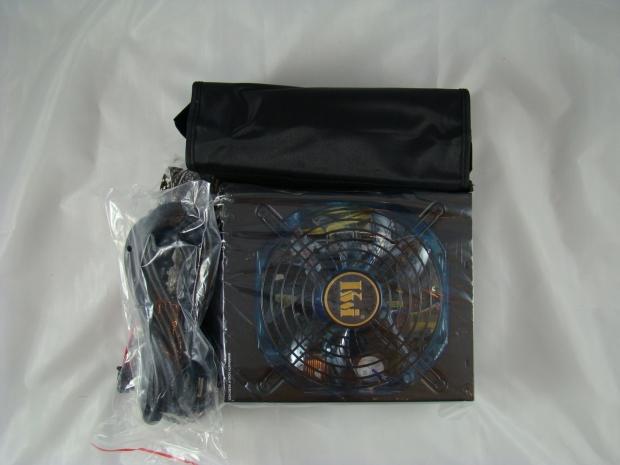 The unit sits in the box just like this with a half inch of foam protecting it on all sides except the bottom of the box. 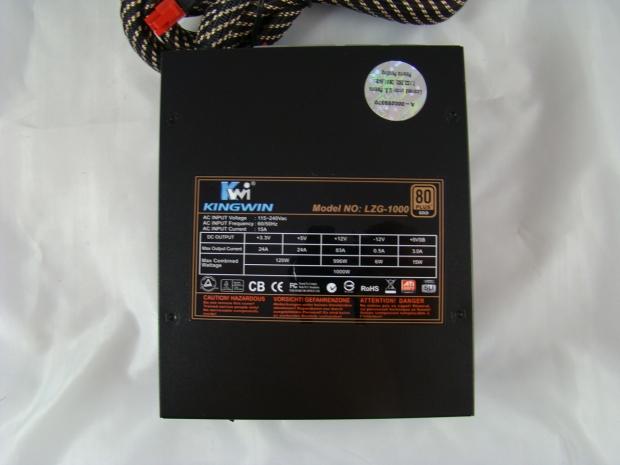 As has become commonplace, the I/O specification label is on the top of the PSU. 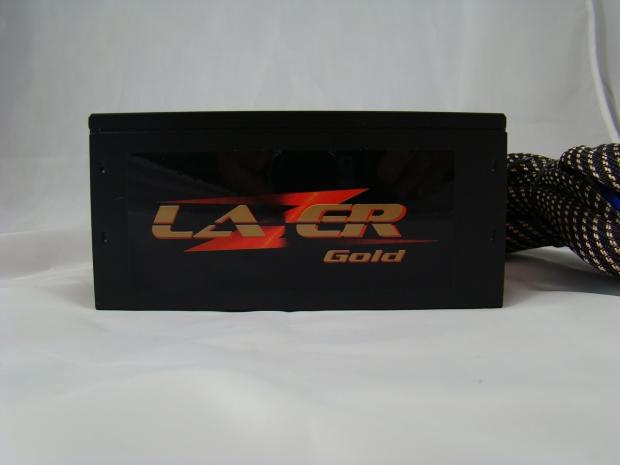 The Lazer Gold logo is only displayed on one side of the unit. 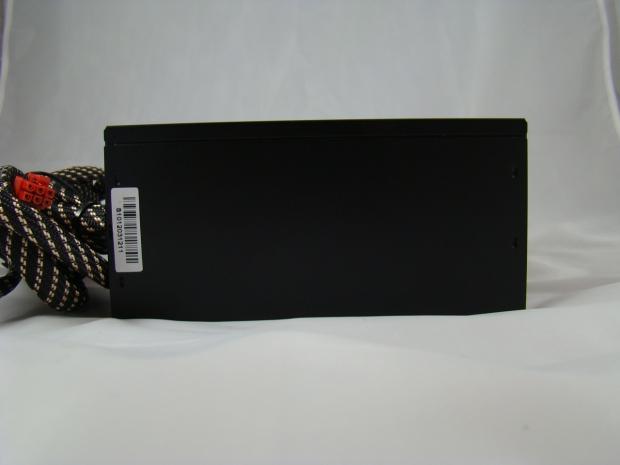 The other side is a blank slate with the exception of a serial number. 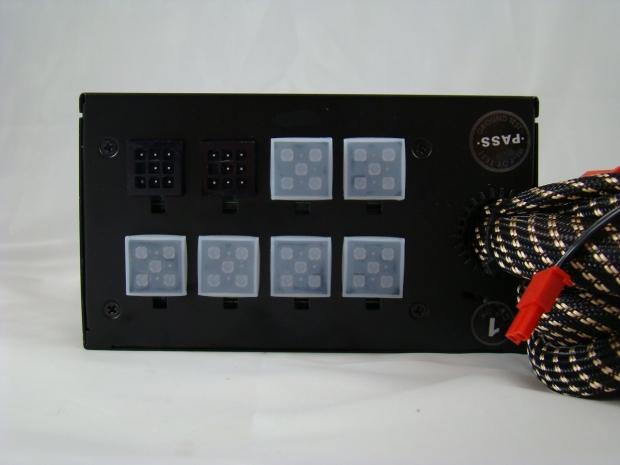 If you've paid any attention to a number of our reviews, you'll quickly recognize this as yet another Super Flower based power supply with the style of modular cables on the front. For those wondering, the LZG-1000 is simply a rebranded SF-1000P14XE. All the Super Flower based units we have had on our benches have done exceptionally well, so we will expect the same from this one. 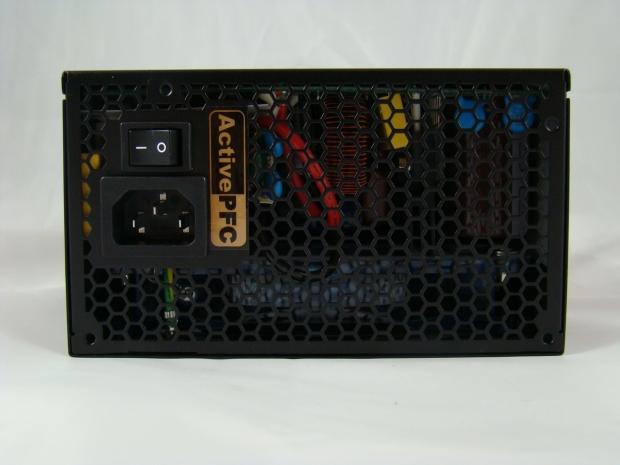 Airflow is kept to a maximum with the honeycomb mesh grill and minimal obstruction on the back of the unit. 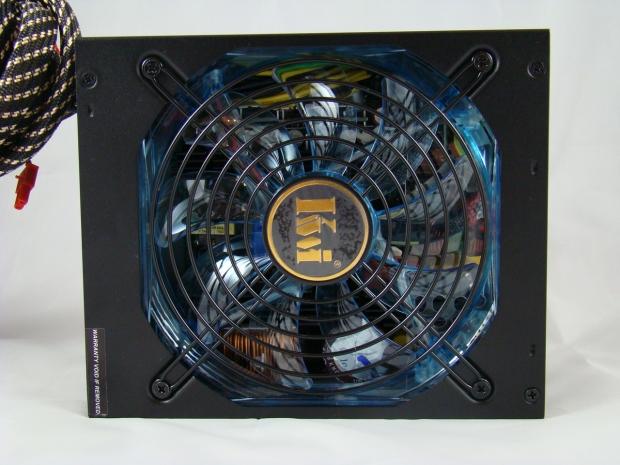 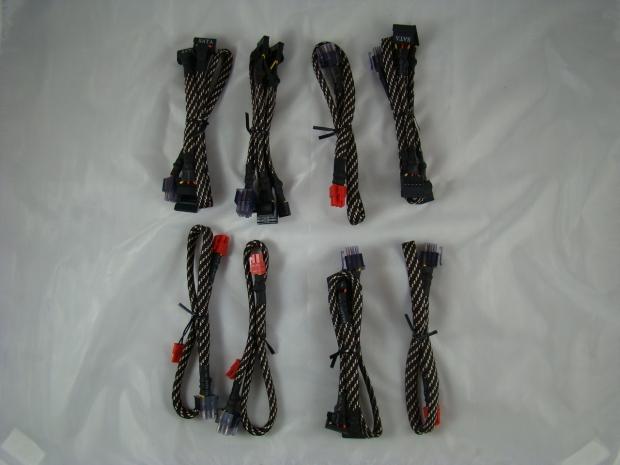 The eight modular cables that are included are fully sleeved. 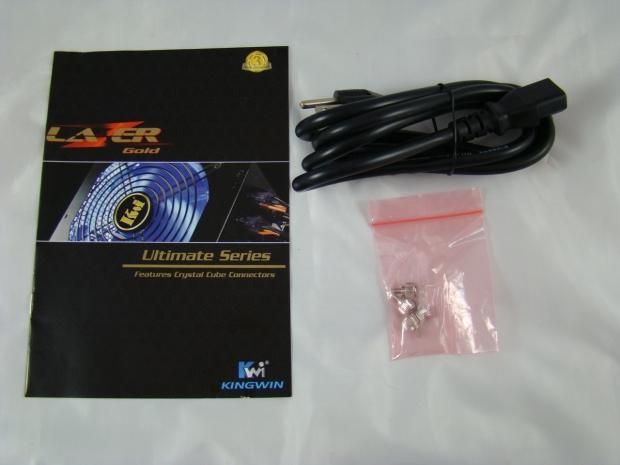 Also included in the box are the user manual, power cable and mounting screws.

The LZG-1000 comes with plenty of cables to make sure that you can utilize the full 1kW of power available. For what little power is left after putting the Main, dual EPS12V/ATX4+4 and six PCI-E connectors to use, Kingwin makes sure that you've got plenty of cables and connectors for peripherals. This includes ten SATA connectors, five Molex connectors and a single FDD connector. That should take care of almost everyone and if more is needed, you should probably be looking at a higher wattage power supply.

The LZG-1000 keeps the rail distribution sweet and simple with a single 12V rail. 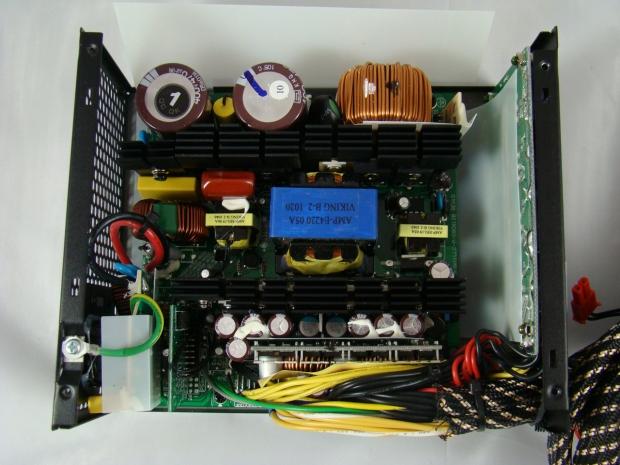 Taking the bottom off the LZG-1000, we are presented with the customary two rows of heatsinks that we have seen in every Super Flower based unit to date. It has worked very well in the past, but this is also the highest wattage unit we've seen from them as well. 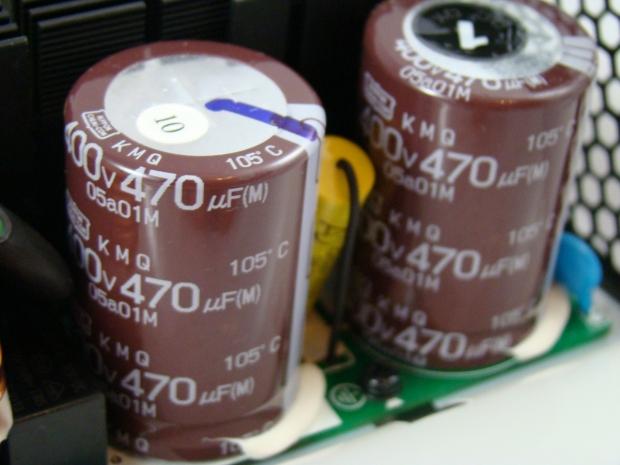 Dual Nippon Chemi-Con capacitors adorn the primary side of the LZG-100. 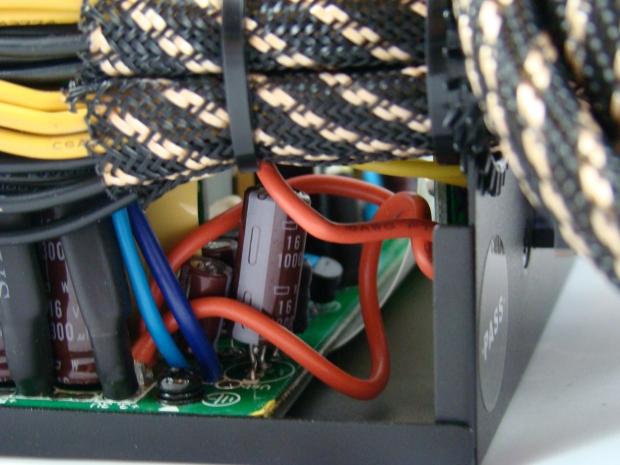 The secondary side is packed full of Nippon Chemi-Con's as well. It's always nice to see 100% Japanese capacitor construction. 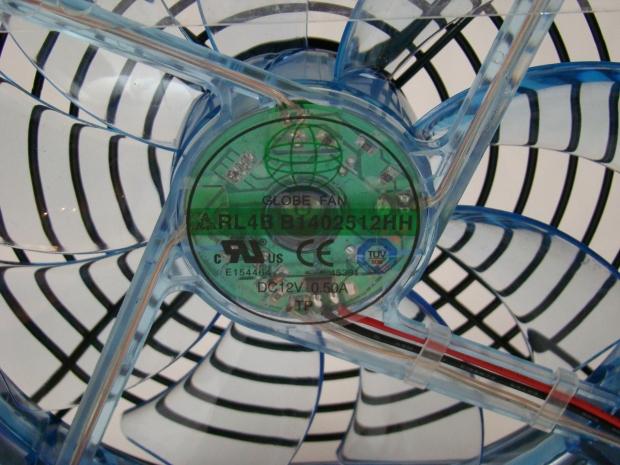 Globe Fan provides the 140mm unit that cools this power supply. The model number on this particular fan is RL4B B1402512HH.

The tests performed are based around six conceivable setups that are out there and progressively load down the PSU up to the power supply's limits or 1000W, whichever comes first. Since our test equipment's limits are equal to that of the Kingwin LZG-1000, we can test it to the maximum. 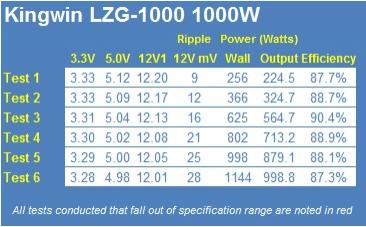 DC output quality was exceptional from start to finish. Starting out, we were barely able to see a ripple on the scope during Test 1 where we measured noise at a measly 9mV peak to peak. This steadily increased as the loads also increased. By the time we had reached around 50% load, the unit ripple had crept up to 16mV. Under full load, we still only see a tiny ripple of 28mV. It's hard to get any better than that.

The Kingwin LZG-1000 is rated for 80Plus Gold efficiency. This means that the power supply must perform at 87%/90%/87% efficiency at 20%/50%/100% loads respectively. As you can see, the LZG-1000 managed to do just that on our test bench. It was certainly cutting it close at all three points, but a pass is a pass no matter how close it is.

Kingwin made a great choice going with Super Flower for a majority of their power supply needs. The LZG-1000 is yet another fine power supply from Kingwin. The unit performed very well throughout all the tests we threw at it. The voltage regulation and DC output quality were exactly what you would expect from a power supply of this caliber and price.

Add in the ability to power a trio of graphics cards with 80Plus Gold efficiency and you've got yourself a hell of a unit that is only short a few features of being perfect. The only real shortcoming of the unit is the short 3-year warranty offered. 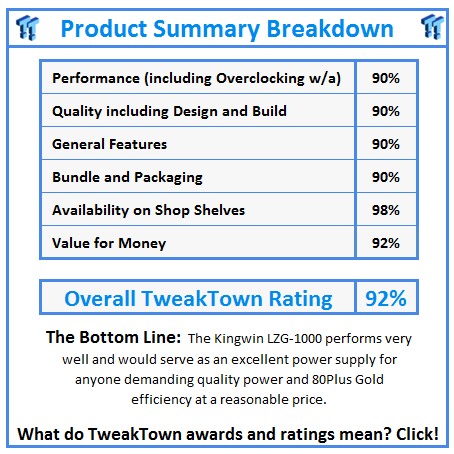