After being underwhelmed by the Mach Xtreme MX-GX last week, we are moving onto the new Sharkoon Flexi-Drive Extreme Duo USB 3.0. Personally, I haven't seen too many Sharkoon products, but the company has a solid reputation. Their product line up spans several categories, but storage components and flash products seem to be their speciality.

Sharkoon currently has four flash based portable storage drives with two using the USB 3.0 interface. The Flexi-Drive Extreme Duo that we are looking at today is the flagship. 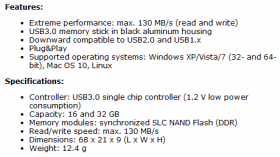 The Sharkoon Flexi-Drive Extreme Duo has the typical cheesy name that comes along with most thumb drives, but this one doesn't follow the traditional paths. To start things off, this USB 3.0 drive uses Single-Level Cell (SLC) flash, the same flash found on enterprise SSDs. The SLC flash gives the Flexi-Drive Extreme Duo the ability to read and write data at the same speed, 130MB/s.

Most of the drives hitting our labs these days have comparable read speed, but their write speeds are nowhere near that of the Extreme Duo. By using synchronized flash, Sharkoon was able to deliver a high speed flash drive with balanced read / write performance.

The Flexi-Drive Extreme Duo is available in two capacity sizes of 16 and 32GB.We've had the 16GB drive in our lab for a couple of weeks now, but I'm still not able to find the drive available in the US. Sharkoon has some products available at Newegg, but not the Extreme Duo. 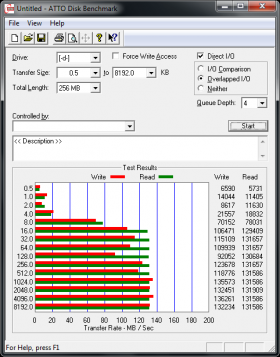 Using ATTO as my initial test, I achieved read and write speeds in excess of 130MB/s. The performance ramped up quickly and the drive showed good speeds all the way down to the 8K block size. 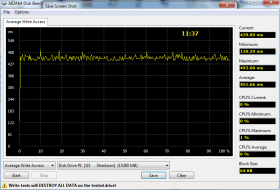 The write latency seemed to be the only weak point on the Extreme Duo. Here we see the drive with an average latency of 451ms. On an SSD this would be an indication of a poor level of performance, but when transferring data to a flash drive it's about on average for what we are seeing from other products.


The speed would make it difficult to run intense programs from the flash drive, though. As long as you are just planning on using the drive for storage and data transfers, you'll be fine. 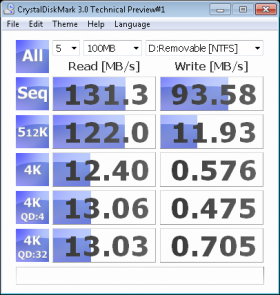 In CrystalDiskMark we are looking at the 4K performance. USB 3.0 doesn't support native command queuing, so the queue depth tests are meaningless. Here we see the Extreme Duo delivering over 12MB/s read at 4K, but the writes were just over .5MB/s. 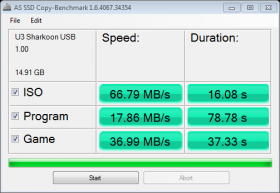 AS SSD Copy Benchmark was used to determine the real world file transfer speed of the thumb drives. Three tests are ran; ISO, Program and Game. The ISO file is a large file, Program is a series of small files and Game is a mix of several large and small files.

The ISO test went by very quickly, just 16 seconds and at an average speed of 67MB/s. Large file transfers are not going to be a problem with the Sharkoon Flexi-Drive Extreme Duo.

The Program test that uses several smaller files took quite a bit longer due to the 4K write performance. This test took just under 80 seconds and had an average speed of 18MB/s.

The Game test which uses a mix of large and small files went better than the program test. The Game test rook just 37 seconds and had an average speed of 37MB/s.

Sharkoon's press release stated the 16GB Flexi-Drive Extreme Duo is capable of handling over 100,000 writes per cell due to the SLC flash used. This is much higher than what you'd get with a MLC drive.

The press release also states that the 16GB model that we looked at today has an MSRP of around 50 EUROs. The price is very good for the performance, technology and longevity that you are getting with the Sharkoon Flexi-Drive Extreme Duo. This is a flash drive that you will be able to use for several years even with heavy use.