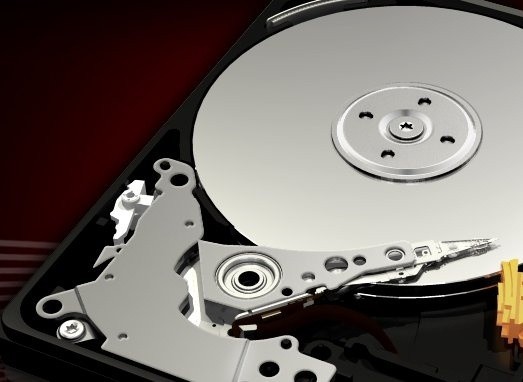 
For years notebook users looking for desktop like performance were forced to purchase notebooks that used desktop components like processors and hard drives. The notebook main board and processor have evolved into components that rival their desktop counterparts, but the 2.5" platter based notebook hard drive has taken more time to reach the same speeds when compared to their desktop equivalent.

When Western Digital announced their new Scorpio Black 750GB and the marketing department advertised it as a notebook drive with desktop performance, I quickly took note. Last year we looked at the Scorpio Blue 750GB, the 5,400 RPM version of the Scorpio Black and came away impressed with the capacity offered, but the speed was only on par with many other 5,400 RPM drives.

Today we will look at the Western Digital Scorpio Black and compare it to many of the leading notebook drives available on the market.

Western Digital's Scorpio Black line has been around for several years and is the company's performance 2.5" product. Each year Western Digital adds to the series bringing more features, advanced technology and increased capacity size. The current flagship that we are looking at today has a maximum capacity size of 750GB, advanced 4K file system, 7,200 RPM platters, 16MB cache and an industry leading 5 year warranty.

The z height for the latest Scorpio Black is 9.5mm, what we would consider a standard notebook drive. We've seen other Western Digital 2.5" drives reach 1TB capacity size, but those use the 12mm height, a format used almost exclusively in enterprise applications.

Western Digital's specifications don't include any performance guarantees, but with the large cache, 7,200 RPM platters and SATA 3G interface we should see benchmark results on par with many 3.5" desktop drives. Western Digital does claim the new Scorpio Black delivers desktop like performance for a notebook.

After looking online we were able to find the Western Digital Scorpio Black 750GB drive at Newegg for only 109.99 USD. At this time there are not many 2.5" high capacity notebook drives using 7,200 RPM platters, but the Scorpio Black is far from the most expensive out there, even though it is the newest. 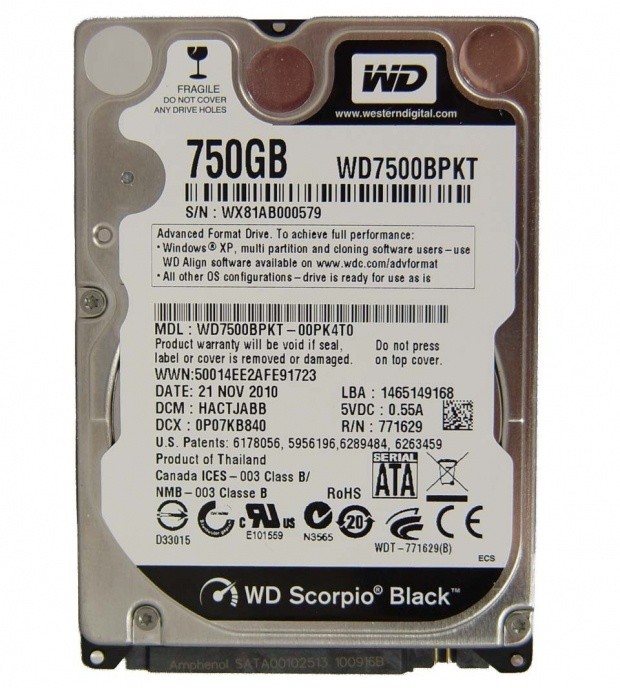 Western Digital sends their HDD samples in OEM packaging, so we're not going to get to see the full retail package. Here we see our bare drive. On the top label we found the model number, serial number and capacity size right on the front. A note was also found about the Advanced Format Drive - we will cover this in the conclusion. 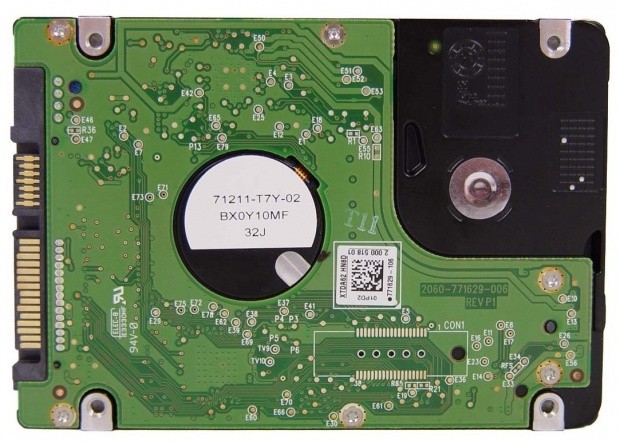 On the back everything is tucked away on the other side of the PCB. This will keep the surface mount components safe. The four bottom mounting points are where they should be so you will not have an issue mounting the Scorpio Black in a notebook that uses the under mount screw system.

The side mounts are also present if your notebook or desktop adapter bracket uses these to install the drive.

On the back of the drive we found the SATA power and data connectors to be where they should. Also, there is a four pin area where a jumper gets placed when installing the advanced format drive in a system like Windows XP that is not designed for the new advanced format. 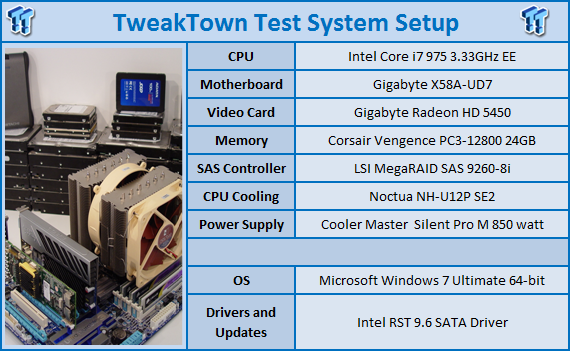 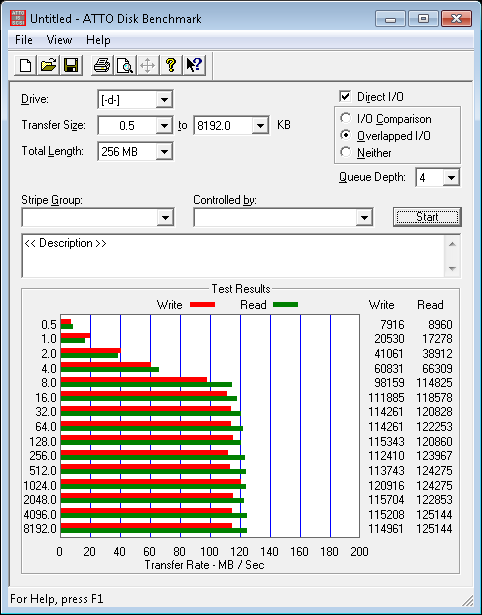 Using ATTO to determine a baseline for performance, we see that the Western Digital Scorpio Black would get rated around 125MB/s read and 115MB/s write. It is hard to believe this level of performance is coming from a 2.5" platter drive. SSDs can hit higher speeds, but they can't be purchased for just over 100 USD or hold over 700GB of data. 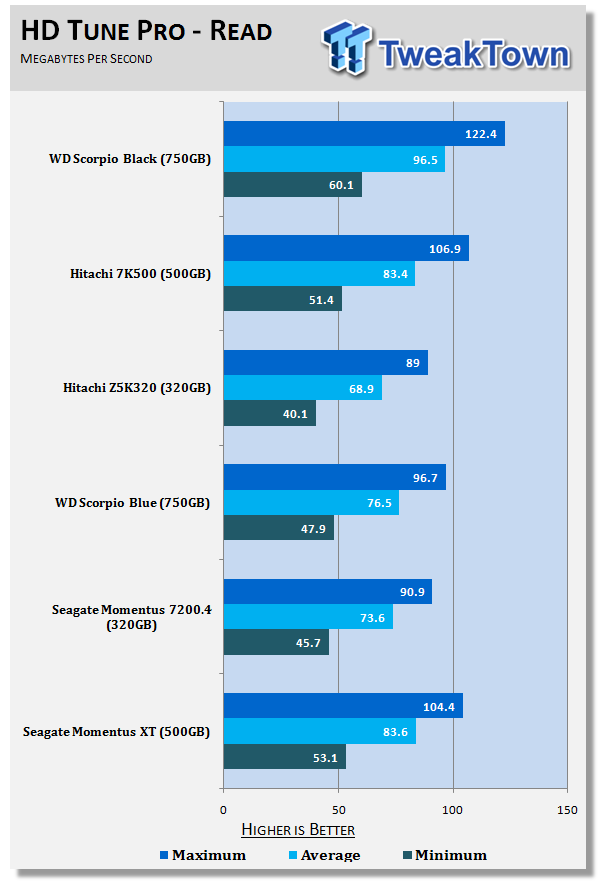 There are some big hitters in the benchmark group today, most of which are 7,200 RPM drives. The Western Digital Scorpio Black is able to outperform all of them by over 10MB/s in the average test and nearly 20MB/s in the maximum performance category. 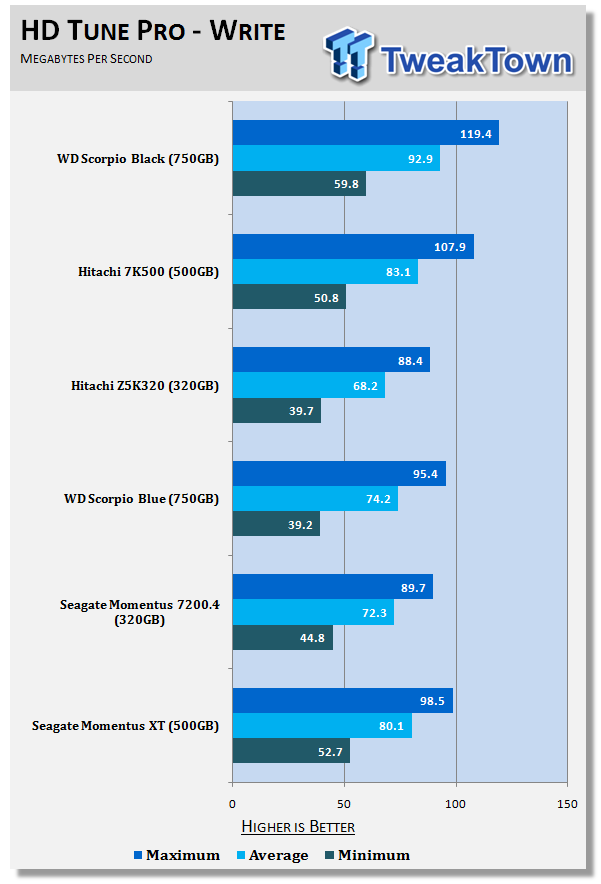 The sustained write speeds across the platters is just as impressive as the read speeds. Here we see the Scorpio Black running a full 12MB/s faster in the average speed result. 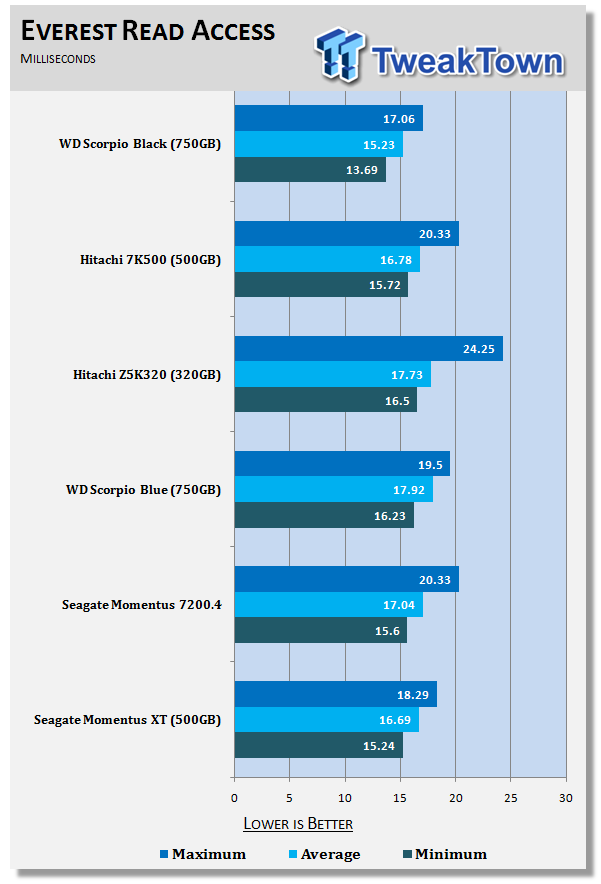 Running the platters at 7,200 RPMs effects latency more than what it does sustained transfer speeds. A drive with low latency makes your applications, windows and browsing 'feel' faster. It is this perceived speed that makes our PCs feel quick. You can have the fastest processor on the market, but if the HDD has a high latency your PC will feel slow. The WD Scorpio Black has the lowest (lower is better) latency than any other 2.5" notebook platter drive we've ever tested. 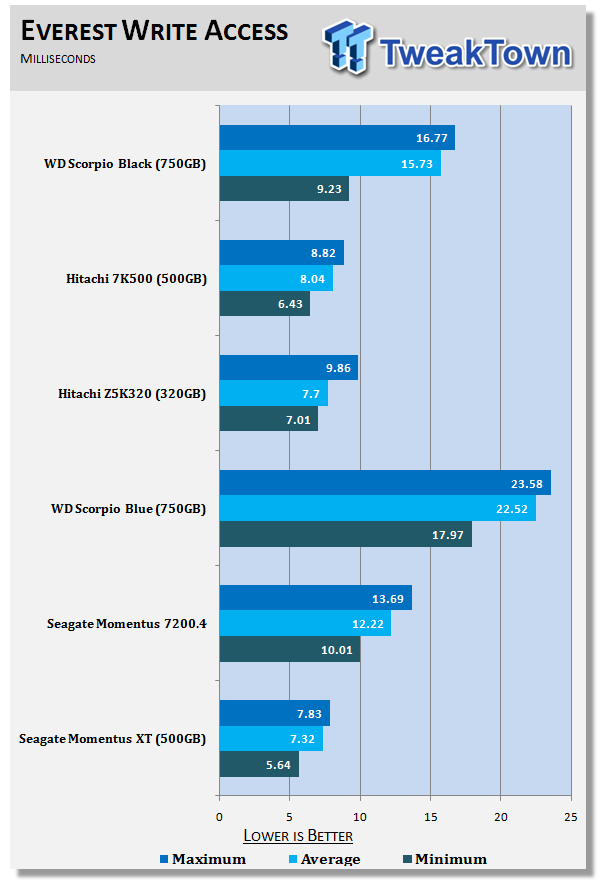 Even with the large 16MB cache the WD Scorpio Black lags behind many of the other drives in our chart when it comes to write latency. Write latency is not as important for desktop use as it is in audio / video production, but we always like to see less of it rather than more.

When looking at real world performance the first thing to be mindful of is how much faster the Scorpio Black is compared to the same capacity size Scorpio Blue. We can see that the additional platter speed allows the Black to reach higher speeds in all tests. The Scorpio Black is actually faster than every other drive in our chart other than the Seagate Momentus XT.

The Seagate Momentus XT is a hybrid drive, a platter drive with a small, SSD like cache system. This drive is very difficult to test since it almost always returns a high benchmark result, but the same level of performance isn't always found in real world conditions. 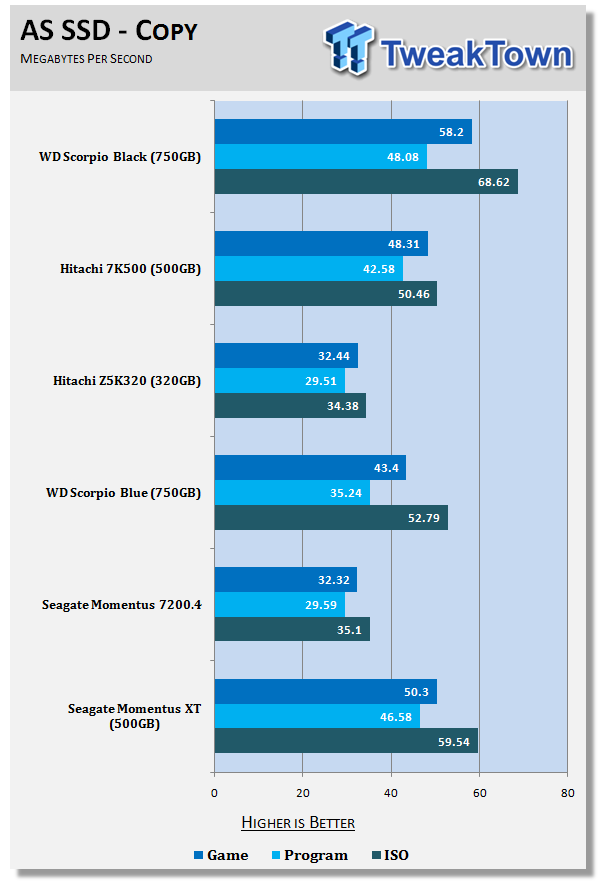 When it comes to transferring data from one area of the drive to another the WD Scorpio Black leads our performance charts. The Momentus XT gave the Scorpio Black a challenge, but the Black just outperformed the XT. 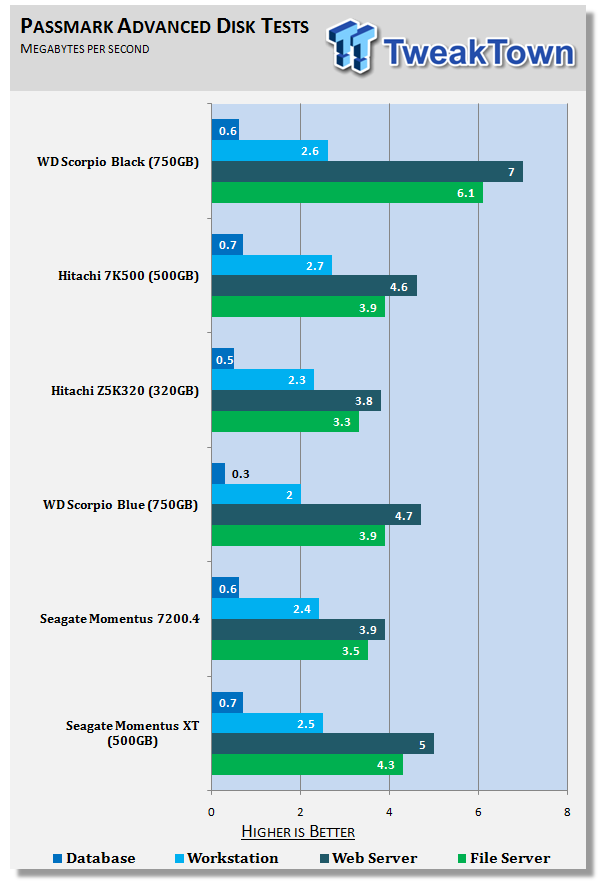 None of the drives in this group are marketed for enterprise workloads, but it's always fun to run these tests. The low write access time of the Scorpio Black allowed it to outperform nearly every other drive in the chart in nearly all tests.

With 750GB of capacity users will be able to keep more data on their notebook than ever before. With more users ditching their desktop in favor of portable computers the need for more storage is on the rise. As we move our lives deeper into the digital realm the need for even more storage capacity will increase. The Western Digital Scorpio Black is a step in the right direction and will allow you to store more data than any notebook SSD, no matter the cost, can offer. 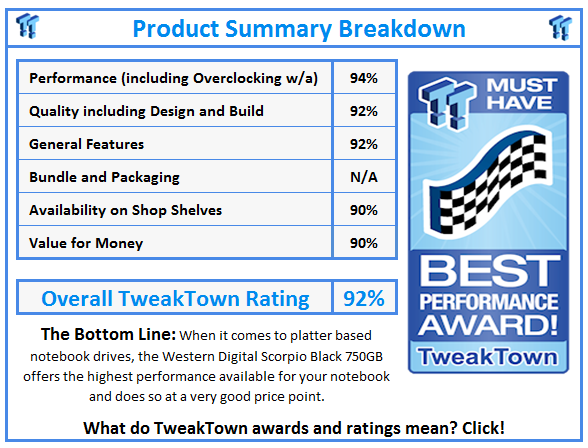