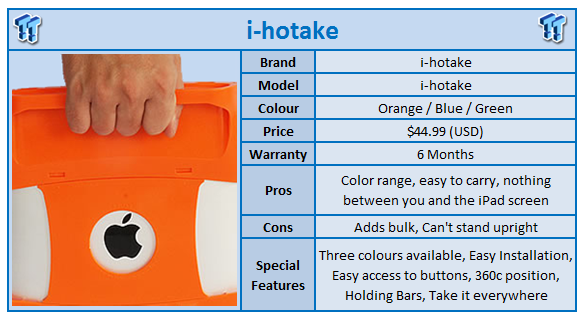 To get the most out of the iPad you really want to have a good carry case. I'm finding since launch my favourite ones involve you not having to pull the iPad in and out of something to get it up and running.

Today we're looking at the i-hotake and it's completely different to anything else we've seen before. The problem is while different is sometimes good, it's also sometimes bad. So the question we ask ourselves; while the i-hotake is different; is it different good, or different bad?

Inside the package there's really very little to the whole device with the i-hotake being all that's inside. Available in three colours; green, blue and orange, we're dealing with the latter one today. 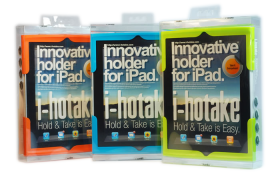 The i-hotake consists of three pieces and the idea is that it sits around your iPad and works as a bit of a table. Installation of the device is a breeze; we slide one end on to the iPad with the centre piece connected and then we proceed to slide the other end on. As they meet we make sure the clips go into the piece and everything gets locked in place.

Installation literally takes seconds and once you've got it attached it's really easy to make use of. Holding the iPad in landscape mode, you slide your hands between the holder and you can easily hit the home button and get up and running. 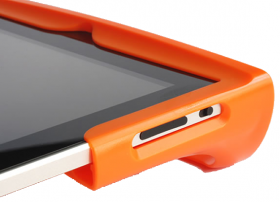 The thing with these rails that are present is if you want to lift one hand out and work the iPad, you feel really confortable knowing that you're not going to drop it. I'm able to actually loosen my grip on the iPad and instead of dropping it which is what would happen if you didn't have the i-hotake, it just kind of flops down until it can't go further due to your hand stopping it. 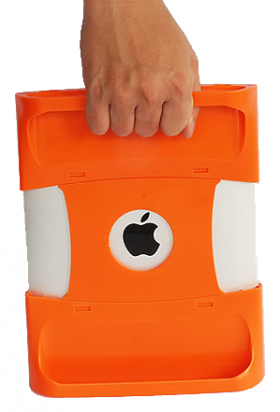 The right side gives us easy access to the volume and orientation lock; oh wait; mute button, since Apple decided to screw that up in the last update. The bottom also gives clear way to the connector and speaker, and while the former won't be of any use in a dock, it does fit our cable in with no problems.

Outside of all this, the best thing about the i-hotake is its ability to be carried around. You can use one of the rails as a handle and because it sits securely, you can feel comfortable carrying it.

This little but handy feature is what makes the i-hotake and is actually how we get the hotake name which means Hold & Take is Easy; and that really sums up the i-hotake in a sentence.

While for the most part everything is pretty good with the i-hotake, there's a few things that stand out. The first would be the added bulk; it's just the price you have to pay for the accessory. The other thing is the colours; I'm not a huge fan of the orange; it's a bit bright for me. I do like the blue, but it would be great to see a female friendly hot pink and then maybe just a more basic black and white.

The only other thing is it would be nice if you could stand it up right. It might look like it can with the way the handle is designed, but it doesn't. Really, though, these are just a few niggling things.

The i-hotake is a simple device that honestly works well. You can place the device face down and the extra thickness added means the screen won't touch the surface. Combined with a good screen protector, though, the i-hotake is a great holder for your iPad, and the main reason for that is it's so quick to be up and running.

There's nothing between you and the screen; you can hit the home button and do what you want quickly, hit the power button to turn the screen off again and you can go off on your way again.