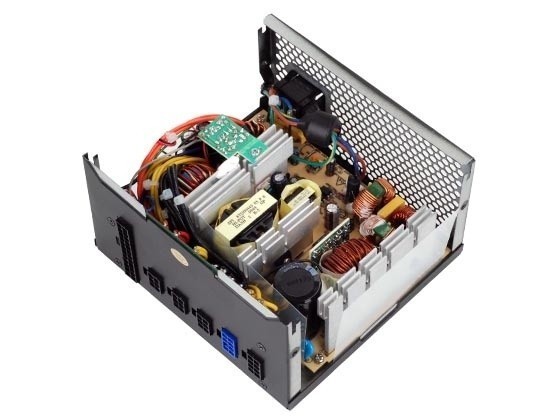 Warranty Update: We sincerely apologise to both SilverStone and our readers for having originally stated in this review that this power supply only carries a 12 month warranty. While this held true in the U.S. for some time, SilverStone extended the warranty period to a much more comfortable 3 years earlier this year; the same warranty terms SilverStone has always given its European customers. It should also be noted that this information in no way affects the overall score.

After going through SilverStone's ST1000-P and seeing the quality it offered, we thought it would be great to take a look at something a little less high from SilverStone. What we came up with was the ST50F-P. SilverStone also suggested that we take a look at their PP05 Short Cable Kit, so we have included it in this review.

This 500W power supply offers half the power and significantly less connectors, but may just offer exactly what you need for your computer. Coupled with the short cable kit, the ST50F-P may be the perfect fit for your needs as well. Since the ST50F-P shares many of the same features as the ST1000-P, it should perform close to the same.

Read on to find out just how well SilverStone's ST50F-P performs and if it is worthy of your hard earned money.

The SilverStone ST50-P has a single 12V rail that is capable of a 34A load. This means about 82% of the total output is available on the 12V rail, which is great for a 500W power supply. The 3.3V rail is capable of 24A while the 5V rail will handle up to 20A. This is an ample amount for almost any system that would utilize a 500W power supply, but it could certainly stand to be a little bit beefier. 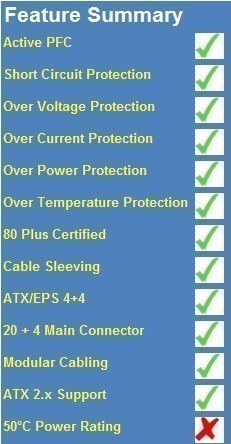 SilverStone doesn't skimp on the features with the ST50F-P. It has all the protections and features we look for with the exception of the 50C rating. However, SilverStone rates the ST50F-P at 40C instead, just like the ST1000-P. It still has the 100% modular cabling which is almost unheard of for lower wattage PSU's, but also makes it an excellent candidate for their PP05 short cable kit. Unlike the ST1000-P which has an 80Plus Silver rating, the ST50F-P only manages a Bronze rating.

The SilverStone ST50F-P can be had for around $80 and is readily available online and in stores. SilverStone doesn't make any mention of warranty information on the box, but we have confirmed with SilverStone that as of last month it carries a 3 year warranty in the U.S.; the same warranty period it gives its European customers. 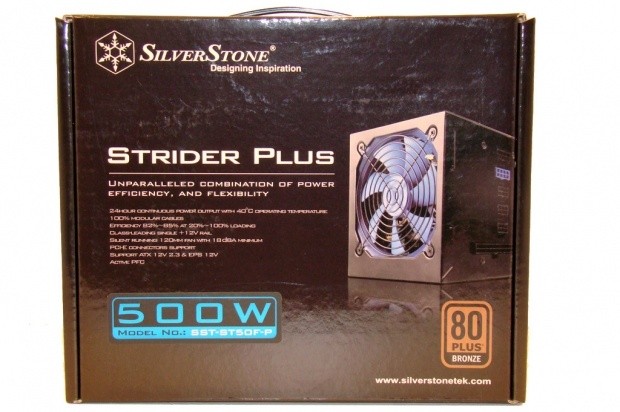 SilverStone does a great job of not overwhelming you with marketing mumbo jumbo on the packaging of the ST50F-P. On the front is a simple image of the power supply and several of the major features of the ST50F-P. 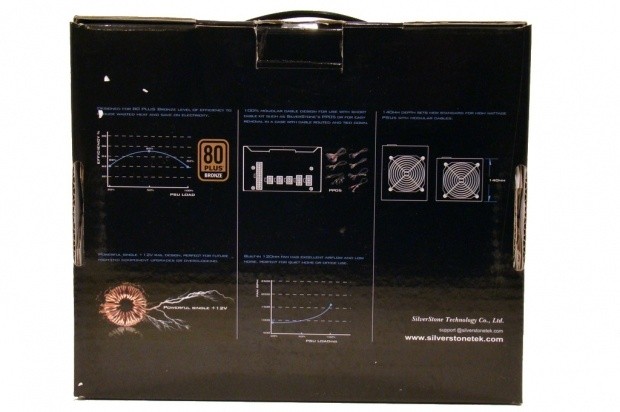 The back of the box continues the trend of simplicity and expands on a few of the features such as the short depth of the unit, fan speed, and availability of the PP05 Short Cable Kit. 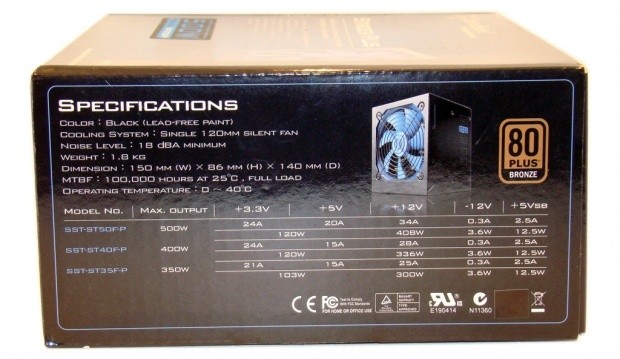 One side of the box displays the output specifications for the ST50F-P. 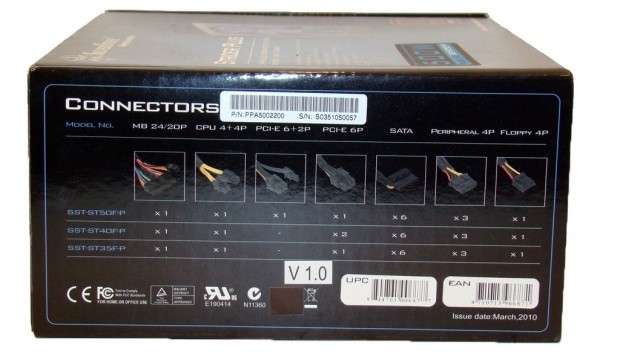 The other side of the box provides you with connector availability on the ST50F-P. Unfortunately cable length isn't listed, but it is better than not knowing what connectors are available at all. 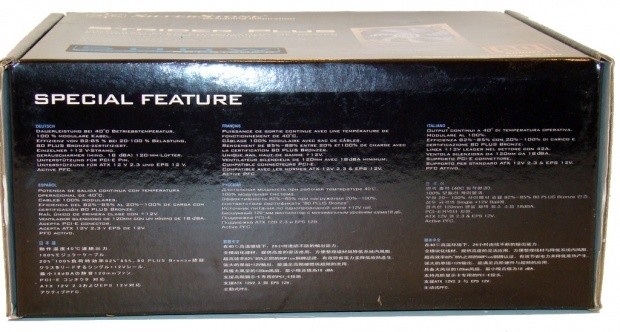 The top of the box for the ST50F-P contains no information and the bottom simply reiterates some of the features in multiple languages. 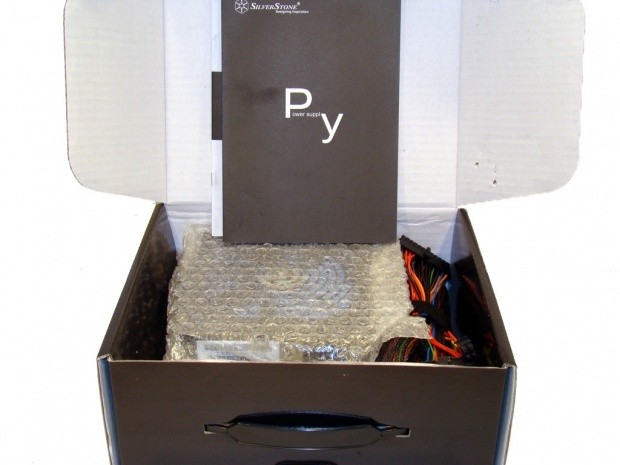 Taking a look inside the box, we can see the packaging material for the ST50F-P. It is quite lackluster to say the least as the only protection the power supply receives is some cheap bubble wrap. The power supply shifts around freely in the box and isn't held in place securely at all. Even the bubble wrap was of low quality as half of the bubbles were popped. 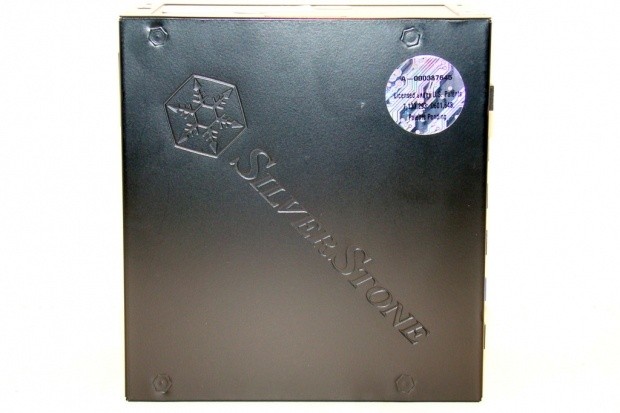 The ST50F-P comes in a semi-gloss black finish. The top of the power supply has the SilverStone logo and name stamped in it. 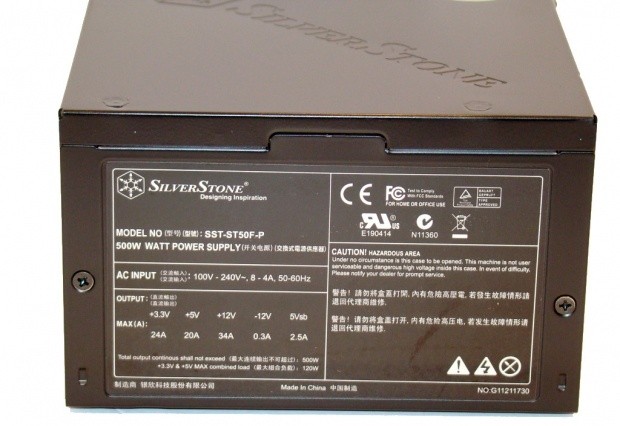 One side of the ST50F-P houses the I/O specification label. 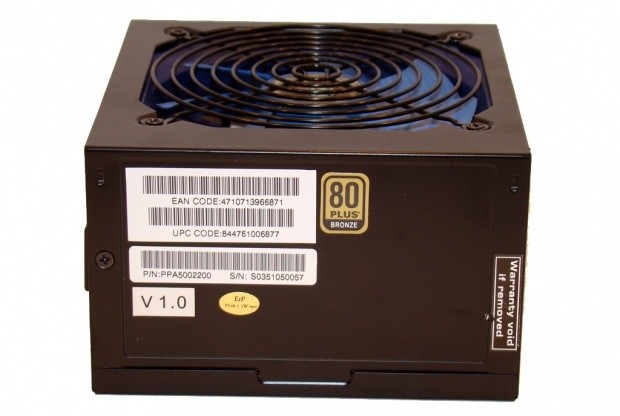 The other side of the PSU houses the identification stickers. 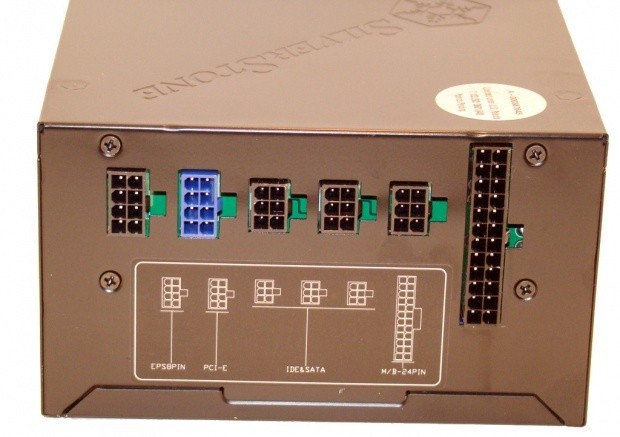 The front shows the available plug-ins for the modular cables. They are rather close together and proved to be a pain to remove cables once they were all connected. Simply rotating them 90 degrees would have made this much easier. 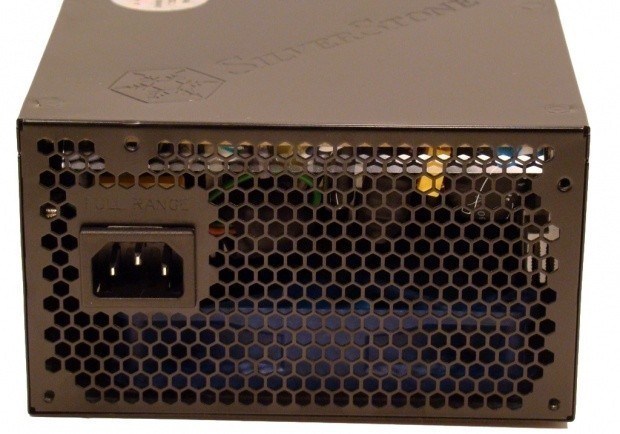 On the back of the ST50F-P we can see the large honeycomb style grill to maximize airflow and vent hot air from the PSU. 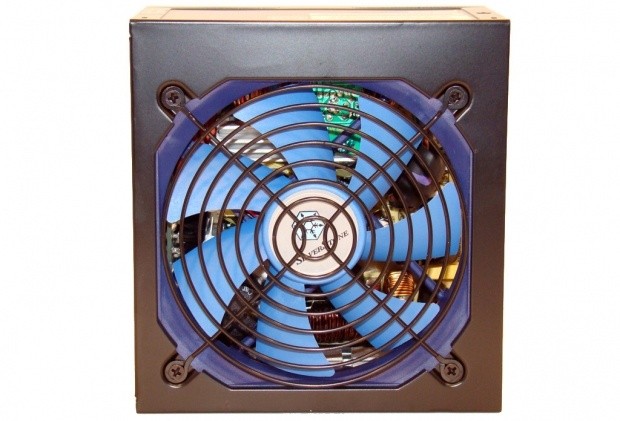 On the bottom of the power supply is the large 120mm fan with wire grill to keep everything cool.

The chart above shows the connectors available and cable length of the PP05 cable kit. As you can see, they are significantly shorter than what is included with the ST50F-P. The cables included are also of differing lengths even if they have the same numbers of connectors on them.

If one were to mix and match these cables with those that come with the ST50F-P, it has the extreme possibility to eliminate all cable clutter with cables that are perfect for what you need.

Note that there are four 6+2 pin PCI-E cables in the PP05 Short Cable Kit. The kit is universal for all of SilverStone's 100% modular PSU's and is intended to be used on them as well. 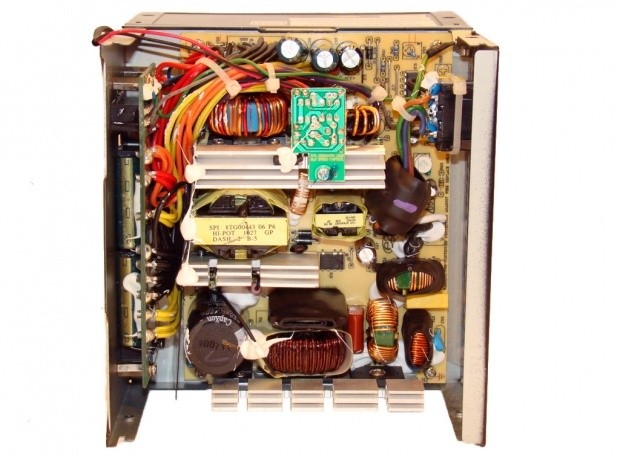 Taking a peek inside the ST50F-P, we can see a trio of heatsinks to cool the power supply and a rather simplistic PCB. 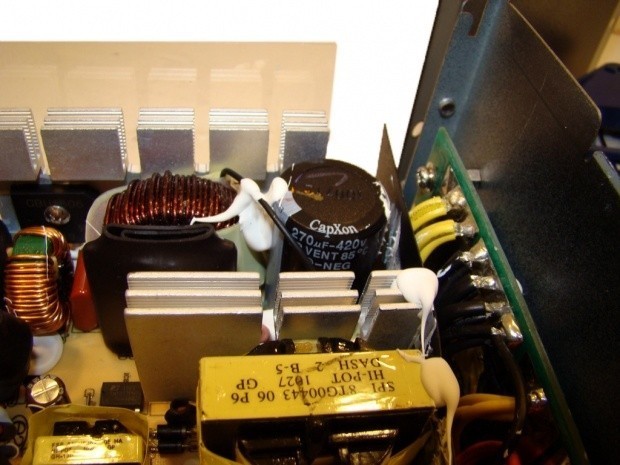 Taking a look at the primary capacitor, we see a single CapXon aluminum electrolytic cap. These are manufactured in China while CapXon's headquarters is in Hong Kong. 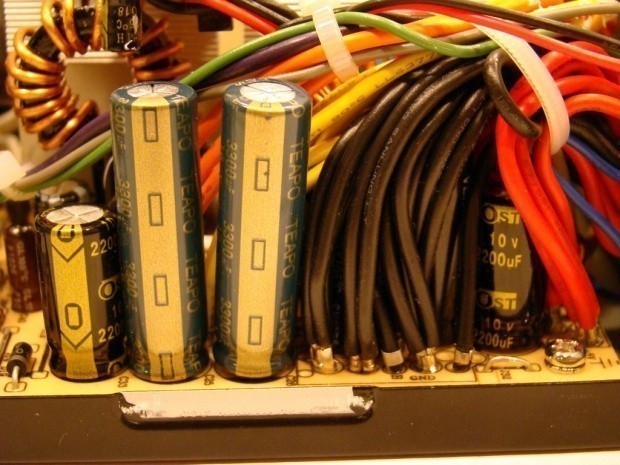 The secondary side of things shows several Taiwanese Teapo capacitors as well as several OST caps. OST is short for Taiwan Oster Corporation and these capacitors are of course made in Taiwan. Silverstone could step the quality up a bit here by switching to Japanese capacitors.

The tests performed are based around six conceivable setups that are out there and progressively load down the PSU up to the power supply's limits or 1000W, whichever comes first. Since our test equipment's limits are greater than the ST50F-P, we can test it to the maximum.

SilverStone's ST50F-P performs exceptionally well, just as the ST1000-P did. There is minimal fluctuation on the 3.3V and 5V rails. Even the 12V rail maintains less than 3% deviation from its intended voltage. Such regulation is almost unheard of in lower wattage power supplies.

While its efficiency is right where it should be for an 80Plus Bronze power supply, it's a shame that they couldn't get the efficiency higher to go along with the quality power delivery.

Warranty Update: We sincerely apologise to both SilverStone and our readers for having originally stated in this review that this power supply only carries a 12 month warranty. While this held true in the U.S. for some time, SilverStone extended the warranty period to a much more comfortable 3 years earlier this year; the same warranty terms SilverStone has always given its European customers. It should also be noted that this information in no way affects the overall score. The power supply performed admirably in our tests and the comfort in knowing it carries a 3 year warranty only brings a broader smile to our face.

SilverStone has another solid power supply with the ST50F-P. The quality of power delivered from such a low wattage unit is impressive to say the very least. SilverStone mixes style, options and power delivery perfectly to satisfy the needs of any entry level gamer or power user. Add in the short cable kit and one simply can't go wrong with the ST50F-P from a performance and usability standpoint.

I highly recommend the unit as it simply performs fantastic. Given this is a 500 watt power supply, I can honestly say after my time with it today that it will perform beyond expectation!