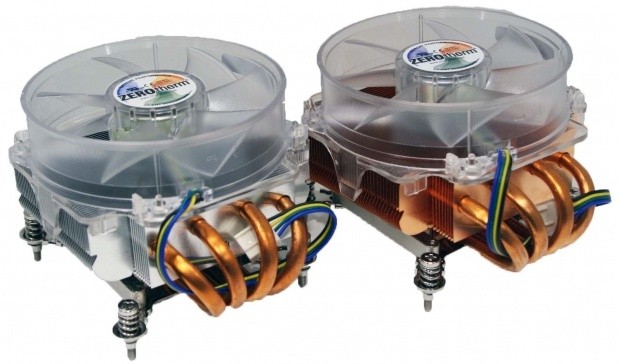 
Motherboards have taken huge leaps since I started getting into PCs. Then it seems that when someone brought up an m-ATX motherboard, it was assumed it was a stripped down, feature-less piece of tech that was just enough to run the essential components, and if you were lucky, you might have been able to run RAID or overclock the components. Today the whole game has changed and it seems more and more people are going to smaller, more compact designs in both motherboards and chassis'.

I know with quite a few of the chassis reviews I have done in the SFF or HTPC categories, I tend to fall back on old faithful; the short stock cooler. It isn't very often that I get the chance to take a look at a cooler that uses less than a 120mm fan to cooler the processor, let alone ones that boast of the fact that they will fit almost anywhere. When I think Compact, I don't think excessive overclocking potential, what I am looking for is the improvements over the stock cooling solution which is what most builders in smaller chassis' are left with using.

Today we are taking a look at two solutions to this exact issue from ZEROtherm. They have submitted the ZT-560D and the ZT-570D for our lab to put through their paces. We don't typically review multiple coolers in the same review, but when you see this pair of coolers and peruse through the specifications, it will become very apparent as to why I chose to do it this way, this time. ZEROtherm has supplied really good and dependable cooling solutions in the past, so let's see just what the ZT560D and the ZT-570D have to offer those who need to cool in even the smallest places. 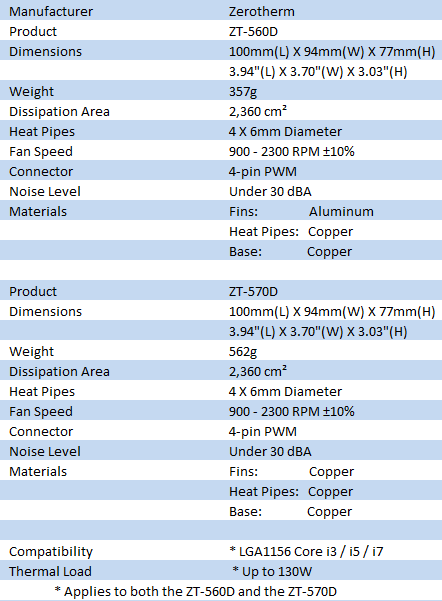 ZEROtherm has delivered both the ZT-560D and the ZT-570D to my doorstep and upon opening them I realized these two coolers were almost twins. Both coolers come in with the same measurements, 77mm tall being the most important here. This allows the coolers to fit in a bunch of places those other coolers won't. Both coolers share the same design of fifty-eight fins pressed onto four 6mm diameter heat pipes. Both coolers are LGA1156 specific and are cooled by the same 92mm fan capable of up to 2300 RPM with blue LEDs in the hub. ZEROtherm recommends that both of these coolers are used with processors at, or below 130W TDP.

Where these two coolers differ is in materials and weight. The ZT-560D uses fifty-eight aluminum fins, copper pipes and a copper base. The ZT-570D uses copper fins, copper pipes, and a copper base. By only changing the fin materials between the two coolers, it takes the weight of the ZT-560D from 357 grams to 562 grams of the ZT-570. We know that copper is a better conductor, and we know it is also more expensive to use. Let's see what ZEROtherm has in mind to combat this aspect.

Google turns up a plethora of hits for both models of this cooler design, so finding one is easy enough. When I did find both coolers I had to do a double take on the pricing I was seeing. Starting things off, the aluminum finned ZT-560D can be found for $24.99 at Newegg.com, which is very affordable. What surprised me a bit more is that the all copper version, the ZT-570D, will only set you back eight dollars more, as the $32.99 tag at Newegg confirms.

I know some are going to like copper over aluminum, or vice versa, so I will leave the looks choice up to you. I will however test this pair of coolers head to head to ease the choice for you. Now let's get to looking at the ZT-560D and the ZT-570D and see what they offer in aesthetics, compatibility and performance. 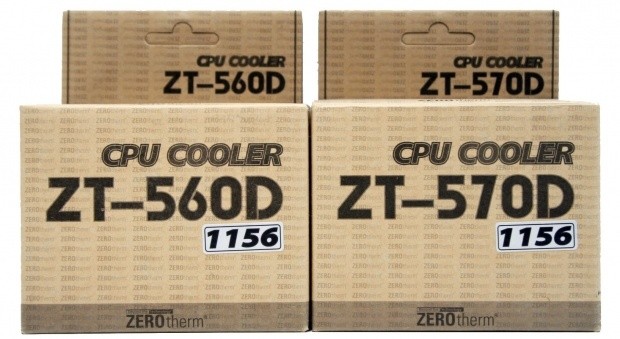 Both coolers side by side look very similar as they share the same packaging essentially. Both the 560D and the 570D are denoted with a sticker labelled 1156 which means simply that these coolers come with LGA1156 mounting only. 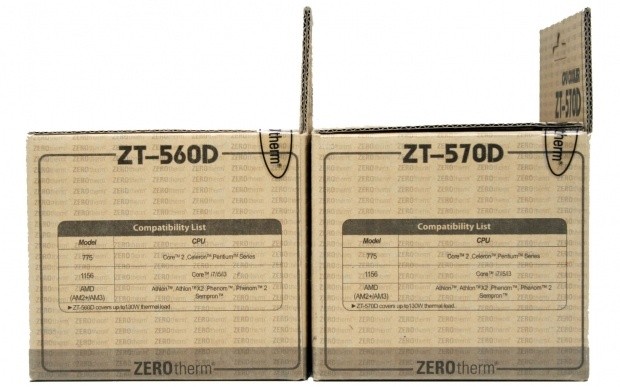 While the package shows compatibility for both LGA775 and AMD sockets, with only one back plate and the lack of hardware, I assure you the 130W or less LGA1156 processors are all you are going to be mounting this cooler to. 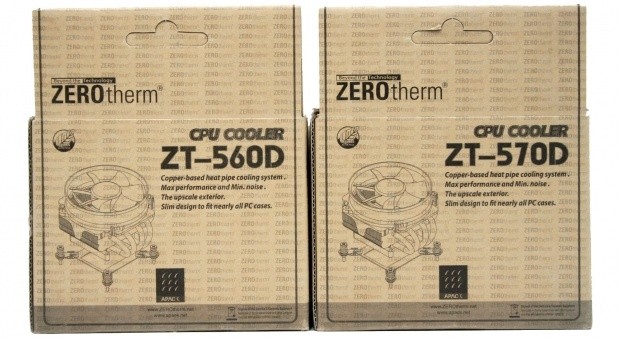 Four features are listed to the right of images of the cooler to the left of both boxes. 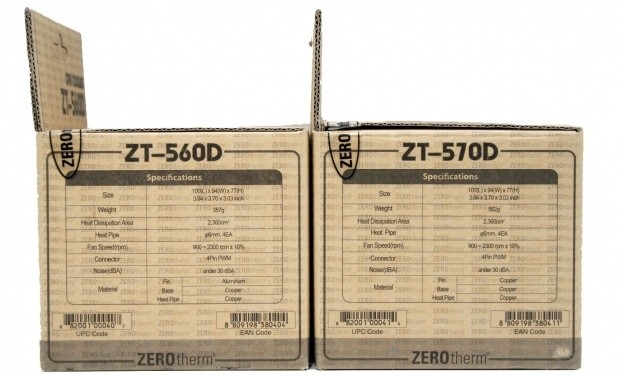 The specifications of both coolers are very similar, except for two points. The fin material changes between the two models, and because copper weighs more than aluminum, the weight of the ZT-570D is a bit more than the ZT-560D.

The ZT-560D on the left is identical to the ZT-570D from all angles. A thick aluminum plate holds the copper base plate and the four, 6mm diameter heat pipes to the mounting system. The pipes make a tight bend on the left so they may return to the horizontal run of fifty-eight fins. These coolers are then cooled with a clear, 92mm fan with blue LEDs in the hub.

With the tight bend of the heat pipes it allows both the 560 and 570 to sit in just about any chassis. With around 77mm needed for clearance it makes these a great candidate over a stock cooler in a HTPC or other SFF chassis. Between the fan and the fins there are no anti-vibration measures taken; it makes me wonder what the fan will do when I send 12V through the 4-pin PWM connection.

Both sides are designed the same. Both sides have a groove cut into the edge of the fins to allow the plastic tabs on the side of the 92mm fan to lock onto the cooler. You can also see that the ending section of fins is cut shorter in length. This is to allow access to the mounting hardware without needing a special tool in already cramped conditions.

This side of the coolers shows the base plate, heat pipe, and mounting hardware sandwich. The pipes are soldered into the base, as the fins come back over the top; the fifty-eight fins are pressed onto the pipes and are proud of the last fin. 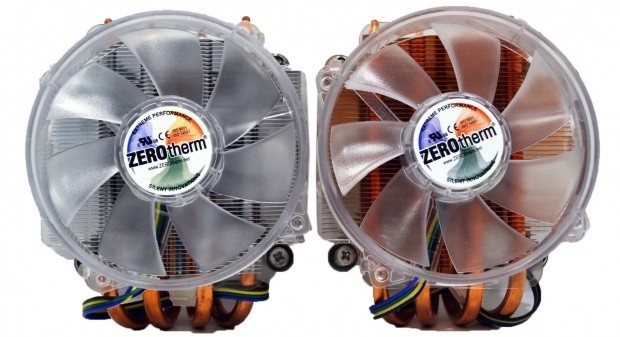 The top view shows that the fan covers the fin arrangement very well. Most of the area that the fan would not have covered is removed so that you may use a long Phillip's screwdriver to mount these into place. 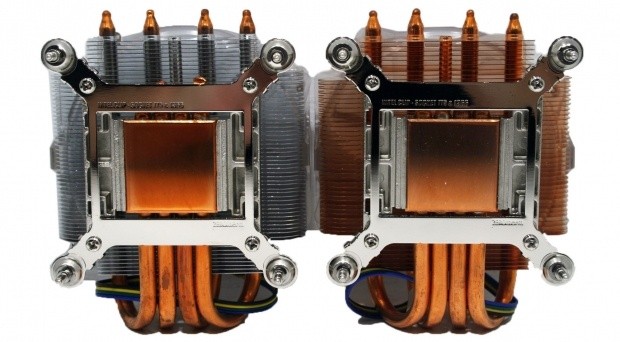 Under the coolers you are greeted with the mounting legs surrounding an exposed copper base. From its time being shipped the copper on both bases and the heat pipes are very oxidized. For testing I will remove the oxidation from the bases before I test. A simple sticker over the bases would have combated this from the factory, although it wouldn't have helped the heat pipes. 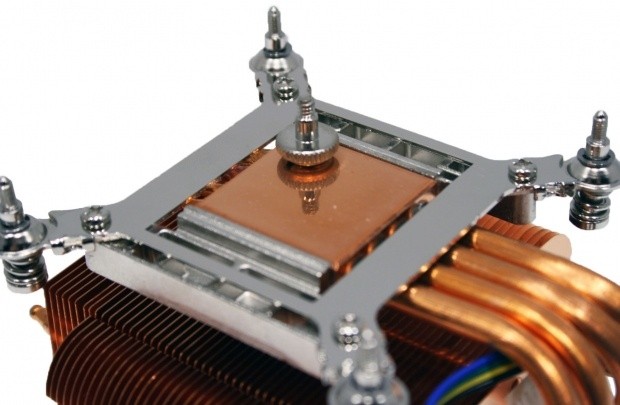 I chose the all copper ZT-570D to show the condition of the base. It is milled fairly flat, with only slight distortion to the base. As I tested both bases with a razor blade, the copper section is level as can be, and are ever so slightly taller than the surrounding aluminum on the two sides. 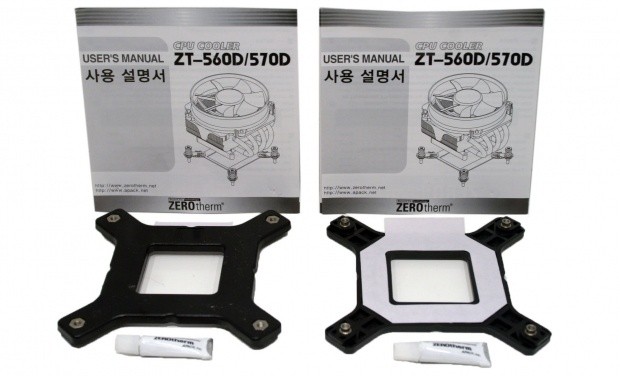 Both coolers use the same hardware and paperwork. The manual is multi lingual, and is very well laid out and depicted with images to aid you along.

This is the point where I show you that even if the side of the box shows it will work on LGA775 as well as AMD, the included hardware doesn't support this. Each cooler is only shipped with a LGA1156 back plate and a small tube of thermal compound. While the legs on the cooler may be adjustable to LGA775, there isn't any supporting plate to allow it to mount.

While testing both at idle, the aluminium ZT-560D comes in just below the average at 57.5 degrees. I knew copper is a better thermal conductor, but I was a bit shocked to see an almost three degree jump in performance with the ZT-570D registering 54.8 degrees.

Under load the gap lessens between the coolers, but both coolers move up a couple places in the listings. A two degree difference is all that separated the copper for aluminum models here.

35 dB is barely audible. The blue LED fan at 7.5V is running about 1000 RPM and you have to get right on top of the fan to hear anything.

At 2300 RPM with 12V coursing through the PWM connection, the fans do make a fair bit of noise. While not the worst on the list, it is a bit louder than the average coolers we have tested with 80-92mm fans.

Firstly, let's talk about where this cooler will fit. Everywhere; well, almost! - Seriously, I have assembled a few SFF and HTPC chassis' that these coolers would be very handy in. There are solutions already on the market that will offer cooling solutions in tight confines, but some don't come with a fan, and most come with a much tougher retail price tag to have to swallow when you buy your cooling solution. The performance of both coolers is very good considering the compact nature of the fin arrangement and the fact that it uses a 92mm fan that can run essentially silent if needed and wont tear into your eardrums at full go.

As far as the choice between the two coolers, my advice is first to go with performance which leaves the ZT-570D the one to buy. So let's move to aesthetics; I prefer the copper fins, so the ZT-570D is still ahead. Since both kits offer the same fan, hardware, and packaging, there isn't a clear winner here. The game always starts as best two out of three, and this game was won by the more impressively performing ZT-570D.

Typically when we see two coolers made like this, the all copper equivalent cooler can get quite expensive over the aluminum counterpart. Now I realize there is less material in this style cooler than a tower style cooler, and ZEROtherm passes the savings onto the customers. For a little less performance, you can acquire the ZT-560D for $24.99 at Newegg.com. For better performance than stock and a price like this, there is no way to lose. If you prefer the better performance and the all copper look, the ZT-570D can be had for $32.99 at Newegg.com. That's right, it's only eight dollars more!