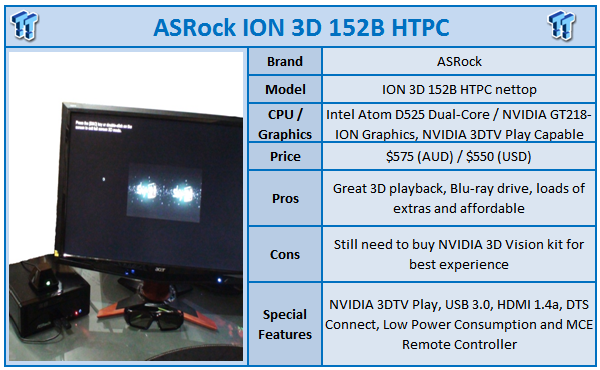 Over the past couple of years we have tested our fair share of ASRock nettop systems. You may remember them as they have developed over time. The small black or white rectangle boxes with loads of goodies packed inside a small box. 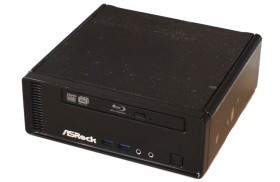 Fast forward a little and we see the release of the ION 3D Series from ASRock. Don't let looks deceive you; it looks pretty similar to all previous nettop systems from ASRock, but what is going on inside the attractive and small case is what is important. As the name implies, the ION 3D comes with 3D playback support. This is thanks to the inclusion of the NVIDIA GT218-ION graphics chip that is NVIDIA 3DTV Play capable. 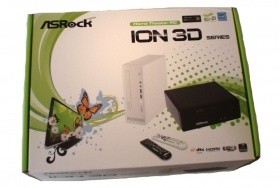 The CPU of choice is the Intel Atom D525 dual-core model which runs at a fairly smooth 1.8GHz. It is a bit of a step-down from the Core 100HT-BD that uses the Intel Core i7 / i5 / i3 mobile processor family, but for the intended purpose of 3D movie playback, the Atom part sufficed well enough we thought. In the memory department, you have support for up to 4GB (2 x 2GB in dual-channel) of DDR2-800 memory running on the mobile Intel ICH8M chipset based motherboard.

As far as storage goes, pre-installed is a 320GB hard disk drive that spins at a not so satisfying, but adequate enough 5400 RPM. In the top of the range ION 3D 152B that we got in for testing, also installed is a Blu-ray optical ROM drive that is also capable of burning and reading DVDs and CDs. The cheaper ION 3D 152D and ION 3D 152DL models lose the Blu-ray drive and instead get a DVD Super Multi drive.

Getting a look at the front of the device above, at the top you can see the Blu-ray optical drive which is a slim version like you can find on some laptops. The tray pops out a little instead of sliding out fully like a normal desktop drive. From the left we have an air vent area, ASRock logo, two USB 3.0 ports, microphone and headphone jacks and the power button.

On the back, you would be forgiven for thinking you were looking at any number of previous nettop systems from ASRock. It's only when you take a close look at the labeling on the stickers that you would be able to tell any difference. Different, though, it is, and starting with the HDMI port, it has been upgraded from HDMI 1.3 to 1.4a which provides 3D support for Blu-ray movies. Besides that, everything else is pretty standard, but as usual, you are looked after with loads of connectors for your various requirements. 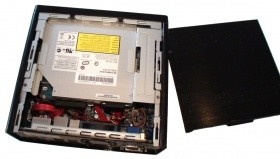 ASRock has always done a nice job when it comes to building and putting these systems together and the ION 3D 152B is no different. Literally in fact, as you can see in the picture above, it looks the same as previous designs from ASRock.


Those previous designs worked well though, and we never saw any issues with heat related problems and the system is very quiet. ASRock claim the sound level to be around 24 decibels, which is basically silent. 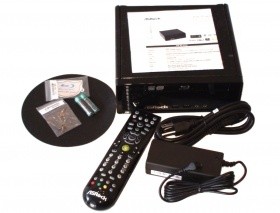 Taking a look at the picture above, you get a look at the complete package. Do note for some reason that the basic red and blue 3D glasses were not included in our sample. From the left you get a non-slip pad for keeping the system still on your table, some stickers and spare screws and batteries for the included MCE remote control. Moving over is the power adapter and cord. There is also a quick start guide included along with a software CD that includes some handy stuff.

The real draw card for this system is the ability to support 3D playback of movies and other files. As we said earlier, it comes configured with NVIDIA 3DTV Play support through the Next-Gen ION graphics processor. When combined with the NVIDIA 3D Vision kit (not included with the ION 3D 152B), you're in for a treat in the 3D department. We got Total Media Theater 3 installed along with all the 3D Vision goodies and the playback provided is smooth and rather impressive. It was actually my first time setting up a PC with 3D support and I was really impressed. Do remember if you are on a tight budget and cannot afford the 3D Vision kit, you can use the included red and blue glasses, but the results will not be as impressive as an active shutter solution like that from NVIDIA.

As far as system performance goes, it runs as you might expect. Being based on mobile parts, don't expect the system to break any performance records or provide a great gaming performance - it's just not designed for that. However, for the intended purpose of being a home theater PC, it does a rather good job. I am still not sure why ASRock haven't teamed up with a SSD drive maker yet to offer solid state drives in these systems, as installing one in them does really speed up things quite dramatically. I hope ASRock in the future will consider offering models with SSDs for those with a bit of extra cash to spend and looking for a really snappy HTPC. That is coming from someone who has had SSD based PC systems for a few years now, though - so for the average consumer, they may not need / want it.

As might be apparent, we are impressed with the ASRock ION 3D 152B HTPC. I already knew I would be impressed with the system, but I still wanted to spend the time and put it through its paces and see if anything had changed from any of the previous ASRock systems I have checked out in the past. Things have changed and ASRock has increased the ante a bit here by adding in 3D support, but not really changing much else.

If you already own a previous generation ASRock HTPC and don't fancy 3D, you'd be wasting your time here. However, if you do want 3D or are on the market for a affordable HTPC with 3D that may not crush its competitors, but offer an all-round pretty good experience, the ION 3D 152B is recommended.