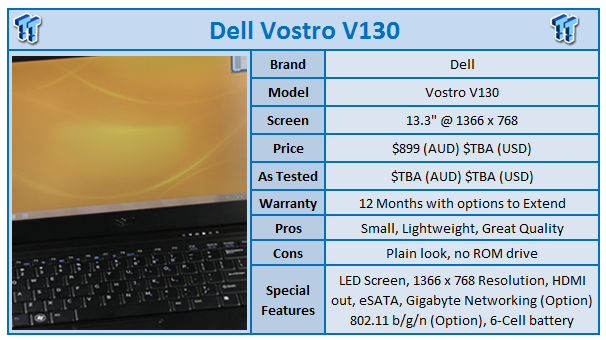 Aimed at the business user, the Vostro series from Dell is today getting a little bit of a face lift and the new V130 is the one we're checking out. Packing some sweet goodies, the V130 looks like it's going to indeed hit the spot for the user on the go.

Checking out the specifications of the V130 we've got on hand, it's very business-like. We've got an Intel i5 470UM which is a Dual Core 1.33GHz CPU that has a total of four threads thanks to HyperThreading. We've got a single 4GB DDR3 memory module clocked at 800MHz DDR and graphics is provided by Intel in the form of Arrandale which carries only very basic features with a 166MHz core clock. You can see the specifications in more detail at the CPU-Z validation page here. 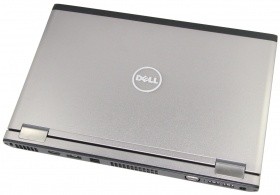 Storage comes in the form of a single 500GB HDD. The screen is a 13.3" Anti-Glare LED lit LCD Panel which carries a native resolution of 1366 x 768, which is slightly above "HD" (or 1280 x 720, otherwise known as 720p). Other little extras include a built in camera that sits just above the screen, wireless 802.11b/g/n, Gigabit Networking and Bluetooth. Power is made possible with a 6-Cell Lithium Ion sealed battery. Everything is tied together with a copy of Windows 7 Professional 64-bit and very little bloat ware. 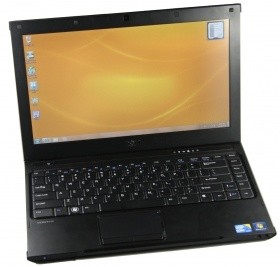 The Vostro line is of course as we've mentioned aimed at the business user on the go, and that's most evident by its small frame. The overall footprint on the V130 is a little large due to the fact we've got a 13.3" monitor. The lack of any ROM drive helps keep the V130 quite thin and more importantly quite light, which for some is going to be the most important feature. 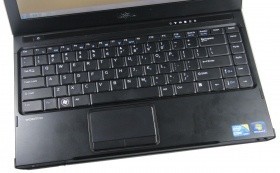 Once up and running the V130 is a beautiful feeling laptop. The quality is there and the keys feel strong. The Black / Silver combination in the design isn't the loudest setup, but is subtle. The chances are in a business environment you don't want bright LED lights that we see in some of the higher end XPS laptops.

Taking a spin around, the front right gives us an audio in and out port along with a power light on the left. The left side is blank with the right side being almost as bear with only a SSD / MMC card reader built in.

Around the back we've got a HDMI, e-SATA and network port on the left with two USB and the power adapter on the right. Connectivity is lighter than past laptops we've looked at, but this is of course due to keeping the overall size down.

Performance in business-like tasks is very strong on our model thanks to that extra memory. Internet Explorer, the desktop and Windows on a whole perform strong. Using Battery Eater Pro, we're able to get an idea of battery life in a worst case scenario. With the screen saver, monitor power off and standby disabled we saw 73 minutes come out of the battery.

While just over an hour might not seem like the most impressive number, you have to remember the fact that if you're just using the internet or performing office tasks you will achieve more out of the battery. With the laptop doing nothing but just displaying our windows desktop and battery meter, we managed to achieve in excess of three hours from the battery. The same brightness was used as when BE Pro was used and screen saver, monitor off and standby were all disabled. It just helps give you a better idea of what the battery is capable of.

Looking at Far Cry 2 performance purely just to give you an idea on gaming performance, you discover that it's not an option. With all settings at low we're getting an average of only 11FPS. The Vostro series isn't designed for gaming in any sense of the word.

What you still get no matter what price, though, is the same kind of quality that we're dealing with today, and really this is what makes Dell laptops such an attractive option for people.

In the end the V130 is a sensational laptop for the market it's designed for. Light weight, thin and a huge array of options and features make it a stand out contender for people on the go, or people who want something that's less fuss than the XPS 14 we recently looked at and more orientated around general office duty work.

Dell has got such a large line up of notebooks that the chances are there's a series for you. The Vostro series is aimed at people who are looking for a "work" laptop. It lacks a ROM drive, it lacks the punchy speakers seen in the XPS 14 and it lacks the big price tag that those other notebooks offer as well.

If you're looking for something for work, something that can be taken around easily, something that is going to be easy to travel with, the Vostro series looks the goods and the V130 is a great part of that series with its feature set. For most, though, we would recommend the move to a 64-bit OS and 4GB memory as it's going to run that little bit nicer.