When borderline eccentric/ mad scientist Dr Emmet Brown (Christopher Lloyd) constructs a time travel device out of the body of a DeLorean car, his friend Marty McFly tags along to the year 1955, 30 years in the past. But when Marty disrupts the past by making contact with his teenage mother and father, he'll have to make things right so he can exist in the future.

I'm happy to say that 25 years on, Back to the Future has lost none of its charm, wit or compellingness. Despite some dated special effects, it's all rather timeless and I think long after everyone involved in its production, it'll still be captivating audiences. It's been a few years since I'd last seen the film, but I thoroughly enjoyed it. 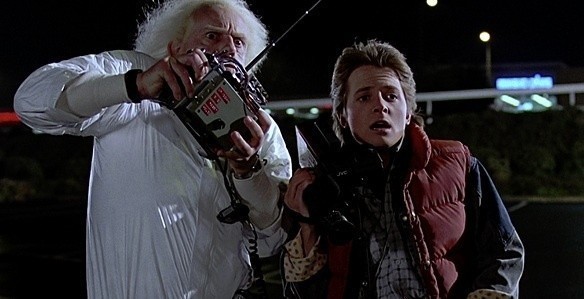 Back to the Future is presented in a widescreen aspect ratio of 1.78:1, encoded with VC-1 compression.

Back To The Future has always had troublesome source materials and the newly struck transfer walks a very fine line between under and overcompensating to make the film look as good as it can. For the most part, they've done a good job, but a toll is occasionally taken.

The biggest improvement I noticed was definition of colour; the high definition spectrum of colour allows the bright bold colours to shine, and the darker scenes to truly display a black image. Sharpness is generally improved, but occasionally a little too much noise reduction has been applied, which makes the image appear a little soft and smudged. The use of noise reduction is generally applied well, though, without being obnoxious. Film artifacts are very rare; Universal have done a stellar job with image clean up.

Overall, it's a generally pleasing video transfer which despite a few instances of noise reduction, remains quite nice and infinitely better than the previous DVD release.

Improving on the new 5.1 mix which was created for the previous DVD release, it seems that Universal mixers have gone back to the source to create a slightly more aggressive mix. It sounds a treat too, with a wide soundstage that breathes far more into the rear channels than the previous conservative mix. You'd never know that the original mix was only Dolby Stereo, because this doesn't sound so different to a newly produced soundtrack. Occasionally, some sound effects and incidental music (including Huey Lewis' 'the Power of Love') sound a little flat with reduced fidelity.

Bass usage is generally rather high, but sometimes comes off as a little ill defined and rumbly.

The score by Alan Silvestri is a classic, and sounds better than ever here. It truly feels part of the mix, with aggressive use of the rear channels.

Overall, a very pleasing mix, which expands upon previous audio mixes and is likely the best the film will ever sound.

The Blu-ray debut of Back to the Future rounds up the vast majority of extra features from previous DVD releases, and includes a few new ones. Let's jump in.

First up is the filmmaker's commentary provided by producer Bob Gale and co-producer Neil Canton. The two have a good memory of the film and Gale especially has some very interesting stories to tell. This commentary differs to the second Q and A commentary provided by Director Robert Zemeckis and Bob Gale which was recorded live after a showing of the movie with film students from USC. Zemeckis is always a treat to listen to, and I enjoyed the looser style and relevant questions from this format, rather than letting filmmakers ramble on.

Next up are the requisite Universal U-control features. Three are provided for all three movies; one Picture in Picture storyboard track which compares the storyboards to the finished film, a Set-ups and Pay-offs which alerts less eagle eyed viewers into some of the subtle and not so subtle moments in the film which may be important later on, and finally a Trivia Track; I always enjoy text based trivia tracks and this was no exception, although I did have issue with the rather small font even on a large display.

The newly produced Tales from the Future documentary equates to around two hours of content, but it's cut up into small sections and divided over the three discs. The first Back to the Future disc features the first three sections In the Beginning, Time to Go and Keeping Time. Easily the best featurette is the first, which reveals for the first time ever, footage of Eric Stolz, whom fans will no doubt know was originally cast to play the role of Marty McFly. Although there is no speaking footage, the few seconds we see are very interesting, an alternate version of a film that was never finished.

The section of Deleted Scenes are presented in fairly scratchy, but high definition resolution. Most scenes were fairly cut, but I did enjoy the 'peanut brittle' scene which solidifies just how much of a push over George McFly is.

The originally scripted, but unfilmed 'Nuclear test site' ending of the film is presented as a storyboard sequence. It would have made for an interesting sequence, but I'm unsure that the technology of the day, and the relatively small budget would have allowed the sequence to ever be done justice.

Next up are a few smaller featurettes which are hangovers from previous DVD releases; Making the Trilogy: Chapter One covers similar ground to the new documentary and is now fairly superfluous, Back to the Future Night is a original fluffy made for TV special for when the first film premiered on TV, but remains a nice bit of history, and finally Making Back to the Future is an original promotional EPK that shows its age.

A few odds and ends are rounded up in the final section, including the fantastic Power of Love Music video by Huey Lewis and the News (which won best song at the 1986 Academy Awards), some mildly comical outtakes, a few Make up tests and random collection of Storyboards and Behind the scenes photos. 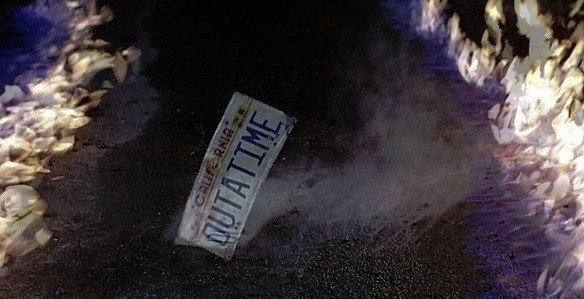