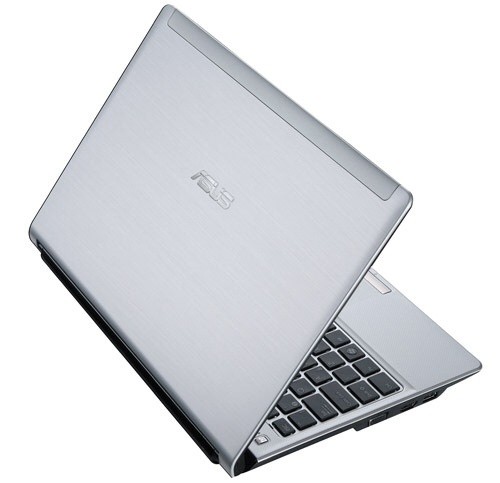 Today I am going to check out a notebook that most would consider to be an ultraportable notebook with a 13.3-inch screen. This class of machine isn't as portable as the new breed of 11-inch notebooks on the market, but that larger screen is welcomed by some users.

ASUS has come a long way over the last few years in name recognition. Much of that new name recognition is thanks to its wildly popular line of Eee netbooks. Netbooks are far from all ASUS is about, though, and this little notebook is a good example of the well-priced machines with nice features that ASUS has in its lineup.

If you are in the market for a notebook that has lots of portability and style, but you don't want a small 11 or 12-inch notebook, the 13.3-inch ASUS U35JC-A1 may be exactly what you need. Let's get into the review of the ASUS U35JC-A1 and see how well the machine stands up to our benchmarks.

ASUS sells a few other configurations for the ASUS U35JC line that have different specifications. The chart below lists all available specs for the family. My test machine is the base model with the Core i3 CPU, 500GB of storage, and an 8-cell battery. Check out the spec chart below: 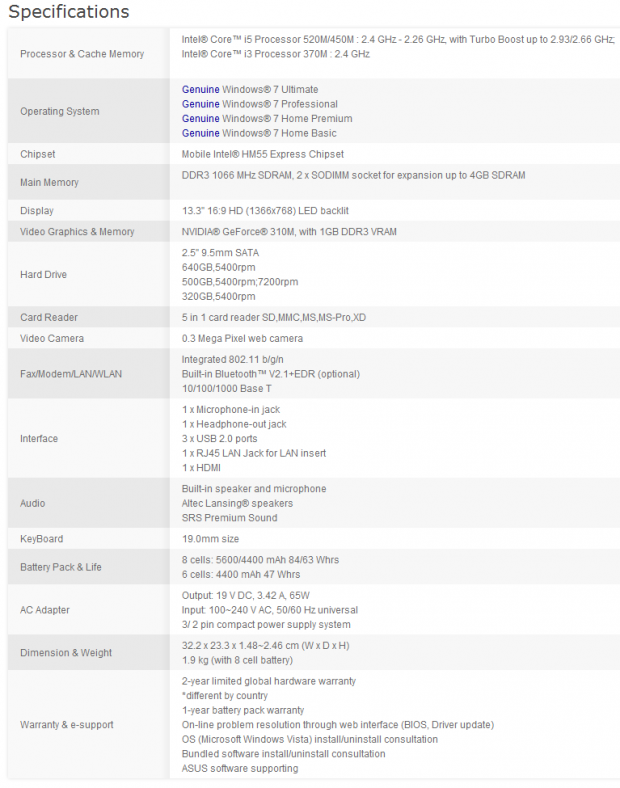 The ASUS U35JC-A1 comes in silver or black. My silver test unit is very nice looking with a brushed aluminum lid that is easy to keep clean. You can also see the back of the notebook here, which has no ports or features.

The front edge of the notebook has a few indicator LEDs and nothing else to see.

This shot gives you an idea of just how thin the ASUS U35JC-A1 is.

The right side of the notebook has the memory card reader, mic/headphone ports, dual USB ports, Ethernet, and the power port.

The left side of the notebook has a cooling vent, VGA output, HDMI out, and a USB port. 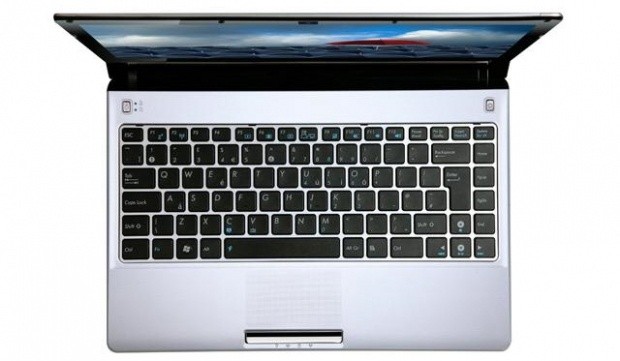 The keyboard is the chicklet style that ASUS uses on most of its notebooks today.

The CPU-Z screenshot for the notebook is below: 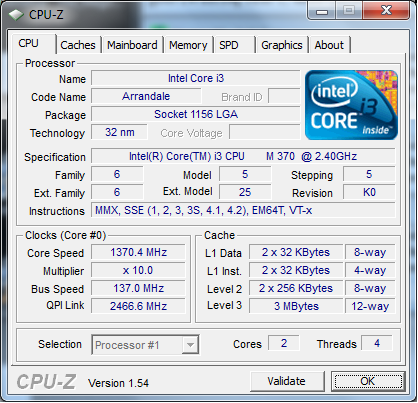 The ASUS U35JC-A1 will be run through the standard notebook/netbook test regime here at TweakTown. This includes iTunes Encoding and Media Transcoding plus Battery Eater Pro for battery life estimation. This machine will also be put through our expanded benchmark regime with the addition of boot time, PCMark Vantage, SuperPi, and Cinebench.

All systems are tested "as is", which means operating systems and drivers can and do vary and some come pre-installed with applications that may or may not affect performance. Any anti-virus or security applications are disabled and uninstalled before any testing is started as they can affect test numbers. 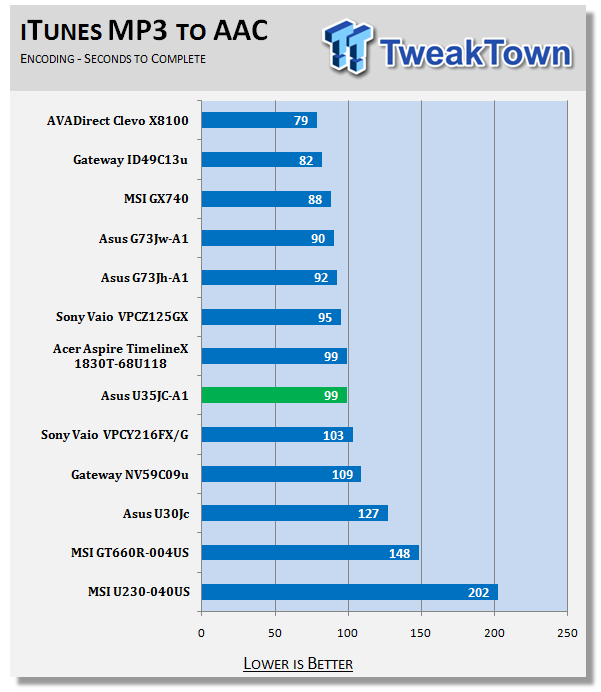 The ASUS U35JC-A1 was just inside the bottom half of the machines tested so far. 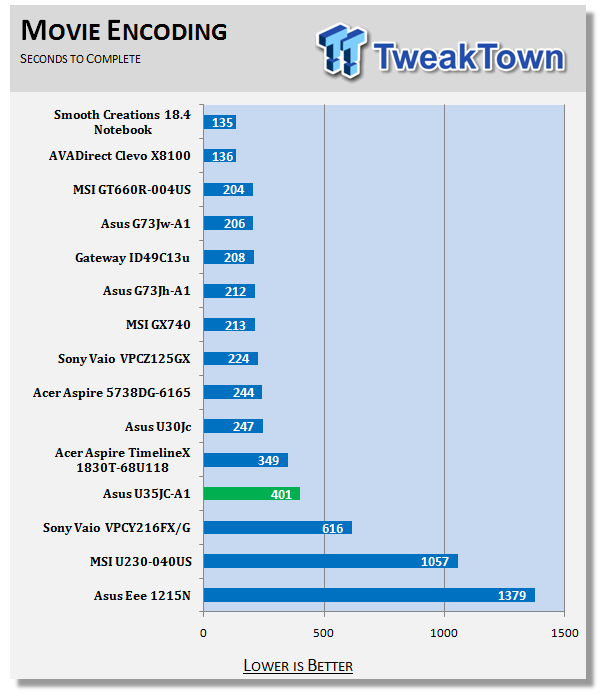 The ASUS U35JC-A1 struggled with video encoding, landing in the bottom four.

Battery Eater Pro is very hard on batteries, so you are likely to get more run time in the real world, depending on how you use the machine. Since we compare all laptops and netbooks the exact same way though, it creates a fair and balanced playing field for our comparisons. 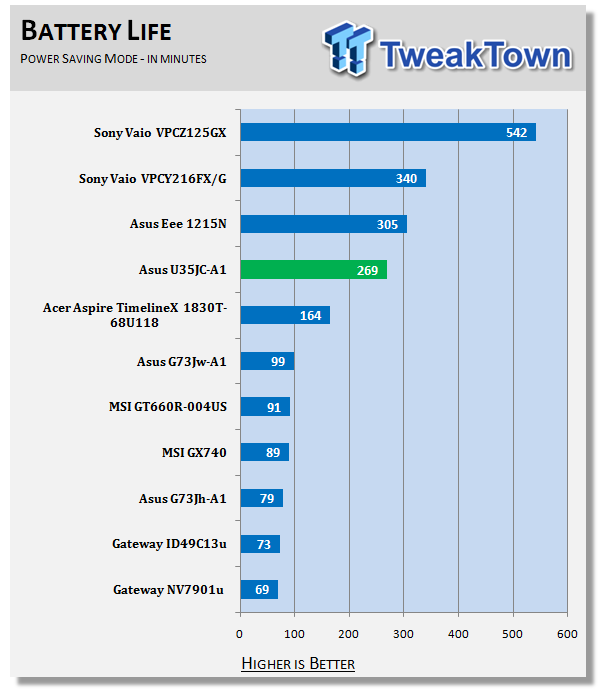 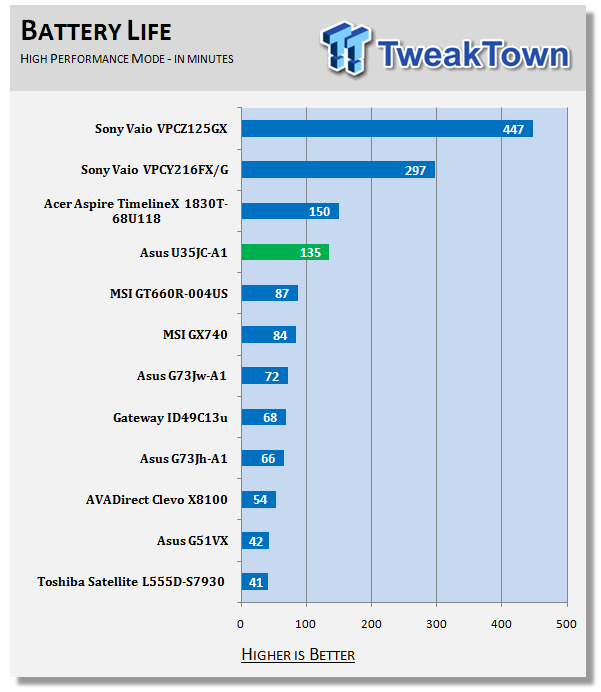 Battery life is definitely a strong suit for the ASUS U35JC-A1 posting a top four finish, showing that battery life is something that ASUS put lots of work into.

We measured boot time using a stopwatch and timed from the point we turned the system on until the very first point the desktop was reached and fully loaded. 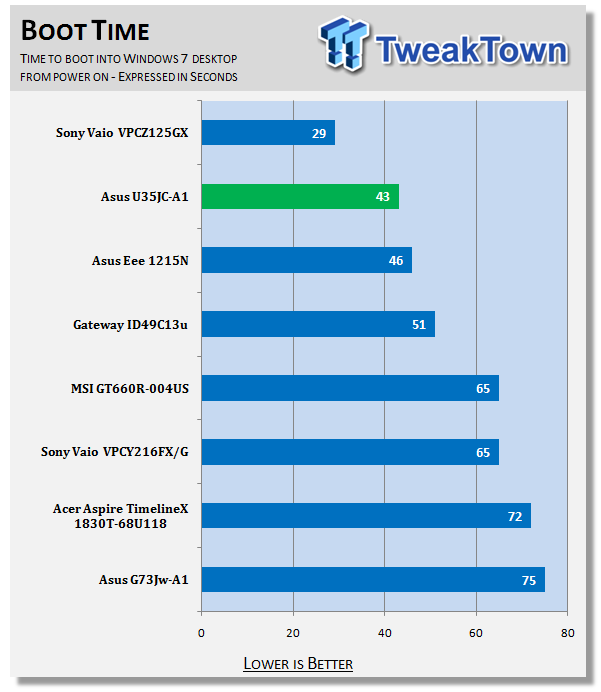 The ASUS U35JC-A1 took second place by a few seconds over the ASUS 1215N netbook.

The power consumed by the machine under full load using Prime95 and at idle is recorded with a Kill A Watt wall outlet measuring device and rounded to the nearest watt. 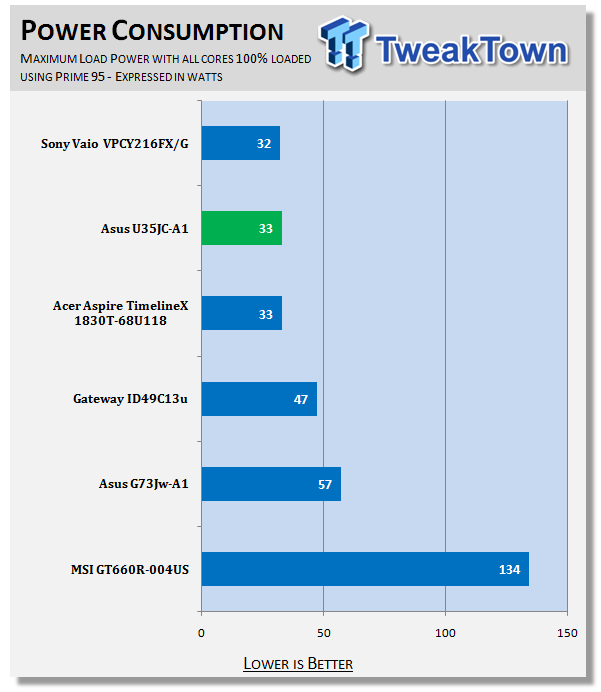 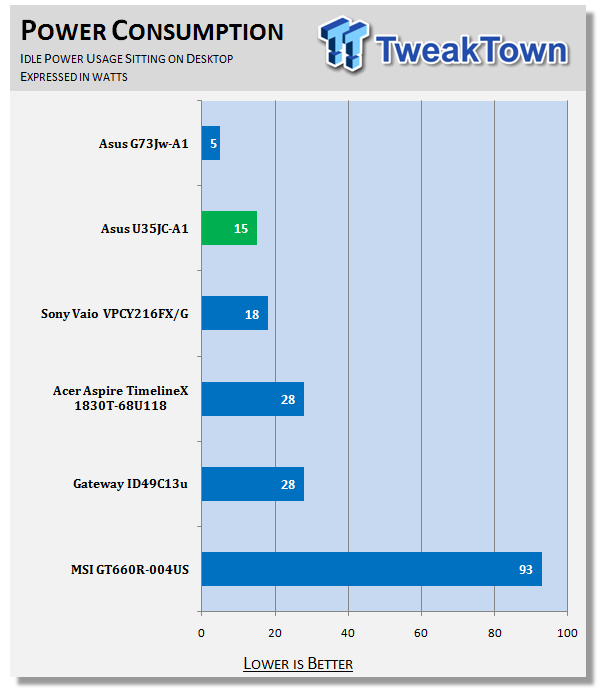 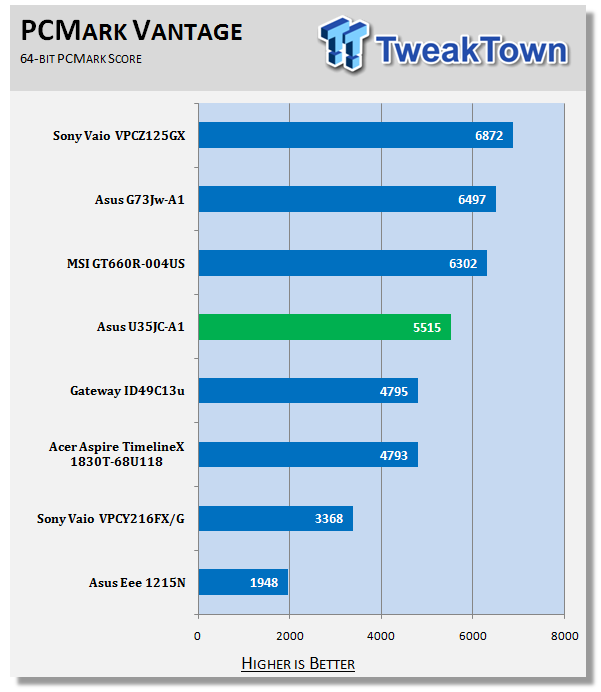 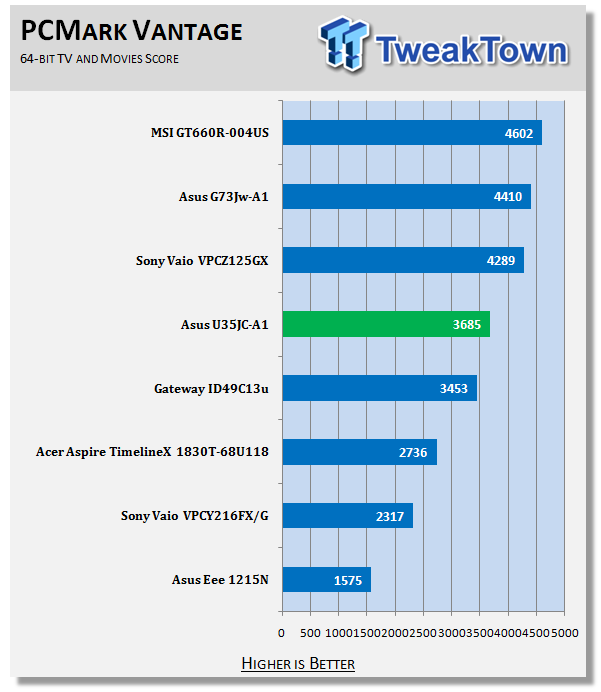 The ASUS U35JC-A1 took fourth in both these measurements with a very solid overall performance in this benchmark that tests just about every function of the notebook.

Version and / or Patch Used: Release 11.5
Developer Homepage: http://www.maxon.net/
CINEBENCH is a real-world test suite that assesses your computer's performance capabilities. MAXON CINEBENCH is based on MAXON's award-winning animation software, CINEMA 4D, which is used extensively by studios and production houses worldwide for 3D content creation. MAXON software has been used in blockbuster movies such as Spider-Man, Star Wars, The Chronicles of Narnia and many more. 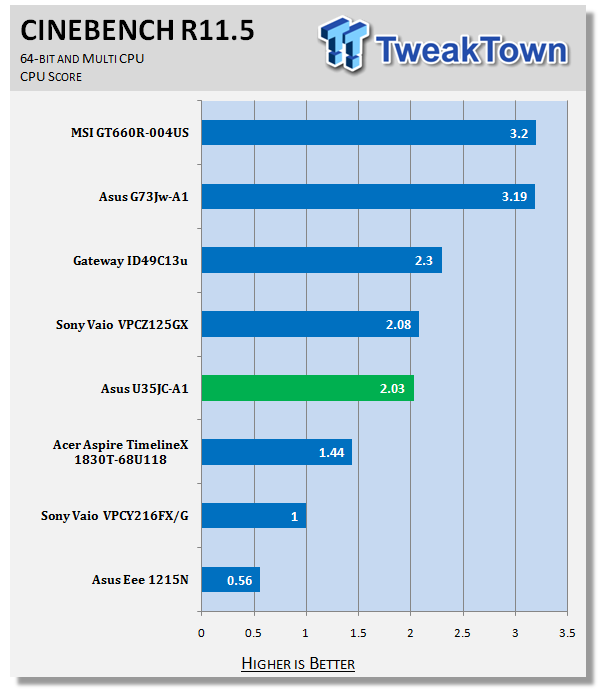 The ASUS U35JC-A1 had a middle of the pack showing here. 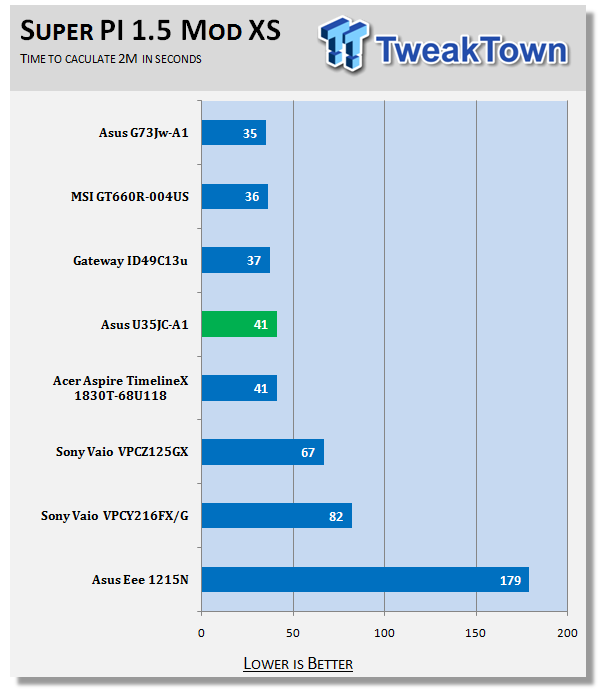 The ASUS U35JC-A1 tied for fourth place in this test with the Acer TimelineX 1830T I reviewed recently.

Hands on Use and Final Thoughts

The little ASUS U35JC-A1 did pretty well in the benchmarks, scoring right where I would expect a machine of its price and size to score. The first thing I noticed when I pulled the ASUS U35JC-A1 from its box was the matte silver finish on the top of the notebook and the wrist rest area. I like matte finishes since they are much easier to keep clean than glossy notebooks. The ASUS U35JC-A1 looks much more expensive than it really is.

The chicklet style keyboard is good enough and if you have used a recent ASUS notebook, this is the keyboard most of its machines use. I wish ASUS would take up all the space available with the keys, there is space left unused on the keyboard. I also dislike that the shift keys are so cramped. The Acer TimelineX 1830T I recently reviewed has a smaller screen and a larger keyboard, so I know ASUS has the room for a better keyboard. Aside from the keys being smaller than they have to be, the chicklet keyboard offers good typing feel and feedback. The shift keys are both smaller than you will find on some notebooks, but they are large enough to use without issues.

The trackpad is under the keyboard and differentiated from the wrist rest by a slightly rough texture. The track pad has good sensitivity, is accurate, and the buttons are easy to press. As I have come to appreciate recently, the tap to click function works just as it is supposed to work; no dramas with its performance in all.

The 13.3-inch screen is highly glossy bringing with it the expected glare in almost any condition. As always, the upside to that glossy screen is that the colors are good for video watching and it has good contrast and black levels. I did notice a hint of pixilation when streaming video online, but not enough to make me want to stop watching. Streaming from Hulu in windowed and full screen modes was smooth with only a touch of stuttering every now and again. The ASUS U35JC-A1 is very capable of streaming media after you are done with the school day or workday.

The ASUS U35JC-A1 has a sound system that is a bit better than others I have recently tested. The small speakers lack bass, but have enough volume that I can hear in a moderately noisy room without straining. If you want better sound headphones or speakers will be required. The ASUS U35JC-A1 is a very attractive machine; I have already mentioned the matte silver finish. You can also get the machine in black.

The thin profile and lightweight makes this notebook easy to carry all day. The ASUS U35JC-A1 also has very good battery life meaning you can work or play away from an outlet for an entire day in most instances without needing to plug in.

From a pure performance perspective, the ASUS U35JC-A1 is right where I expect an ultraportable to fall. It has fantastic battery life, which is its stand out feature. The overall performance that the ASUS U35JC-A1 delivers makes it sort of like a B student. It has no glaring faults, but has no significant standout features either.