The Samsung BD-C6500 Blu-ray player is the midrange model in their product line, offering built-in wireless support, but no 3D playback. In a market crowded with set-top players, console systems and even HTPCs, how does the C6500 compare?

Setup is easy enough; simply connect a HDMI cable from the C6500 to either your audio receiver (if it supports HDMI) or directly to your TV. The player also supports analog component video or even ye'olde composite video connections.

The C6500 also supports a wired Ethernet connection or Wi-Fi over 802.11g/n. 802.11g-based routers work just fine, but N-based routers are a bit faster in establishing a connection. Typing out any kind of complicated wireless passcode can be a pain using the remote, but you only have to do it once until you reset the player. 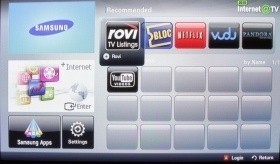 Once the C6500 is connected to the Internet, it will update the "apps" that it uses to provide access to Netflix, Blockbuster, YouTube and the rest (Hulu support will be upcoming once the paid-for service goes live). This will place five icons at the top of the display that you can use to choose from Rovi (a TV listings app), Netflix, Blockbuster, Vudu and Pandora. Unfortunately, you are unable to select which icons you'd like to have displayed.

Netflix support is solid, if not outstanding. The biggest issue is that you cannot navigate through Netflix's large Instant Watch library; instead you have to use your PC to add titles to the Instant Watch Queue before you can load them up on the player. Since the Netflix capability of the C6500 is provided via an "app," there's still the possibility that Samsung can make it more robust, but that remains to be seen.

The quality is absolutely astounding, especially with streaming HD content. I've confused Netflix HD with broadcast HD before, as it simply looks that good. 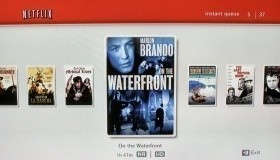 In our modern world, media comes in all kinds of different formats. There's DVD, Xvid, Blu-ray, MKV, WMV, iTunes, Netflix and so on. It's not like the VHS days, where you basically watched your entertainment on that format and that's all there was. Anything capable of playing digital media in 2010 (and beyond) needs to support a wide variety of formats. This is where the C6500 does an admirable job. Plugging in a 1 TB external hard drive (using the NTFS file system), I was able to play a remarkable number of different file formats with ease, including the ubiquitous Xvid and MKV formats.

There are some puzzling omissions, though; AAC has still yet to be supported, making the idea of streaming music from iTunes complicated (though no one expects support for DRM), along with OGG (mostly found in MKVs as secondary audio tracks).

Even with the formats the C6500 supports, there are issues. Any error in the MKV, no matter how small, causes playback to cease and the next video in the playlist to load. You can re-launch the original video and skip ahead past the time the glitch occurs, but this is very annoying when a single MKV file has 3-5 such glitches. I was able to make it all the way to the end, but it was quite an annoyance.


Files encoded with Xvid also have a tendency to "slow down", as if the processor in the player is having a hard time trying to decode everything. I've always been able to fix this problem by stopping the video, playing it again and skipping ahead to the point where it started slowing down. I've also stumbled across a few Xvid files that simply will not play, even though the specs are identical to files that will. It's simply baffling.

The C6500 plays Blu-ray discs, too, doesn't it? - Some may find it odd to mention this capability last, but it's actually on purpose. I've come across people with Blu-ray players who rarely, if ever, use them to play Blu-ray discs. It's a brave new world out there, and while I don't think that downloadable movies are the format of choice at this time, I do see a lot of people taking advantage of online streaming of content. 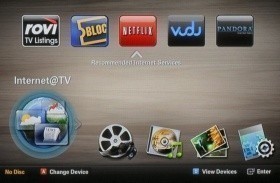 However, for those with physical media, rest assured the C6500 does an outstanding job with the presentation. Up-scaled DVDs look as good as they can be expected to, while Blu-ray show why it is the HD format of choice for now. The player emits hardly any noise while accessing discs, though sometimes the initial loading process can produce quite a bit of noise (although it quiets down to a bare whisper once the disc is loaded).

Speed was a big issue when the Blu-ray format was first introduced, and while you'll still notice it takes longer than DVDs (the menu system is a lot more complicated), it's still very close, with most discs taking around fifteen seconds to boot up.

There are still some compatibility issues with Blu-ray discs, mostly stemming from the ever-changing copy protection that is updated to deter pirates. A particular troublesome Blu-ray is the release of Avatar, which caused issues with many players upon its release because of its newer copy protection.

The C6500 has been able to play it just fine, though I've heard reports of people who had problems with it before updating their firmware. The nice thing about the C6500 is that it's constantly checking to make sure if it needs to be updated and the procedure is relatively painless (a box pops up asking you if you want to upgrade), though it can take a good five minutes to perform the update.

The Samsung BD-C6500 is so close to being an all-in-one device for all of your home theater needs in a set top box (outside of a HTPC of course), but is aggravating in that it still falls short in some areas.

However, nitpickiness aside, this is a great player and should be strongly considered by anyone looking for a robust, quality player for HD content on all mediums.