Here we are again looking at a new entry onto the notebook market from ViewSonic. Last time I had my hands on a notebook from ViewSonic it was the Viewbook Pro and the little beast was one fantastic notebook for its class. Today I am having a look at the ViewSonic VNB141.

This notebook shares a familiar resemblance to the Viewbook Pro, but it gives up some of the cool features that machine sported in favor of a larger screen and a simpler design. You get no extra battery or removable optical drive here.

The machine looks good, though, and pairs up well against the more established 14-inch ultraportable competition on paper. How well does it stack up against its peers? Read on for all of the details on the ViewSonic VNB141 notebook.

The ViewSonic VNB141 is a nice looking notebook with a black case and nice features. The machine rings in at about $830 online making it more expensive than some of its ultraportable peers. Check out the chart below for all the specifications of the ViewSonic VNB141. 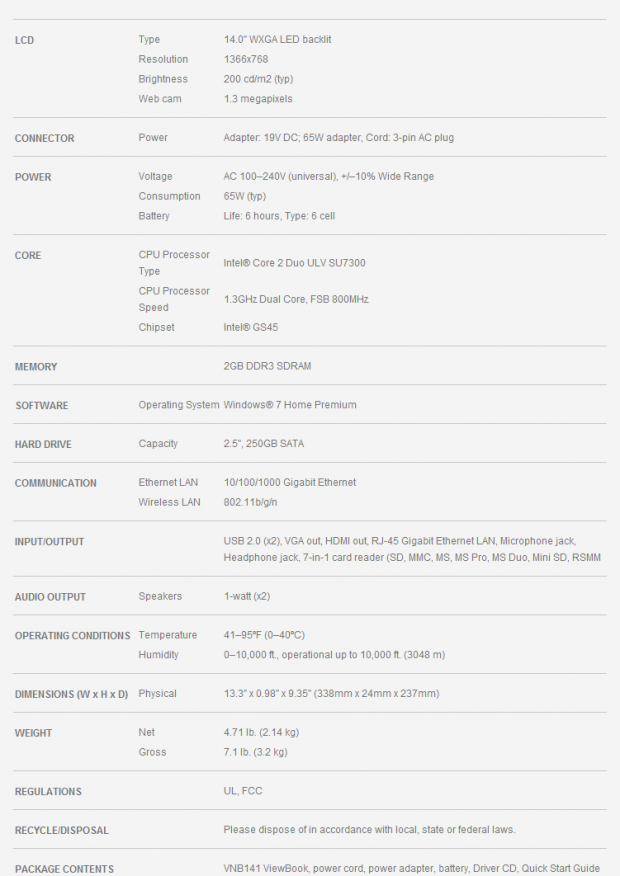 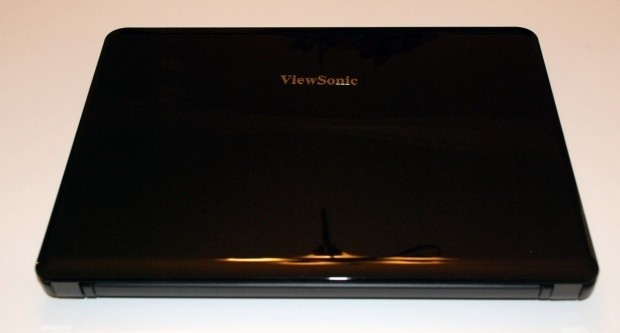 The ViewSonic VNB141 is a rather plain looking machine with a glossy black case that catches many fingerprints.

The left side of the notebook has the power port, VGA out, HDMI out, Ethernet and an eSATA port.

The right side of the machine has a pair of USB ports, mic/headphone jack and the optical drive.

The front edge of the ViewSonic VNB141 has the memory card reader and a toggle that turns the WiFi radio on and off. 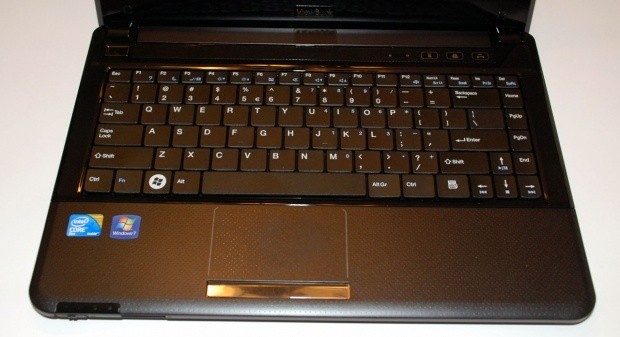 The keyboard of the ViewSonic VNB141 is what you expect from the class with well-spaced keys and decent typing feel. 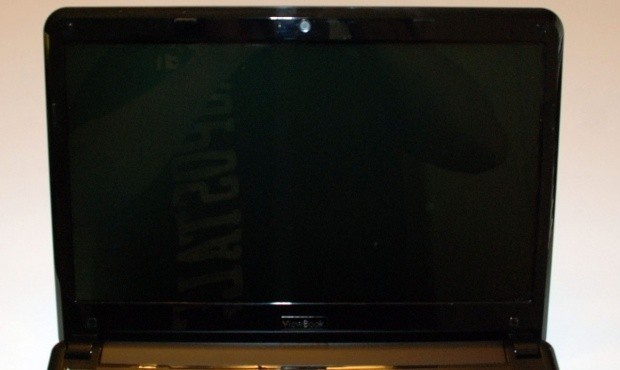 The screen is very glossy and prone to glare with decent colors and contrast for movies and video. 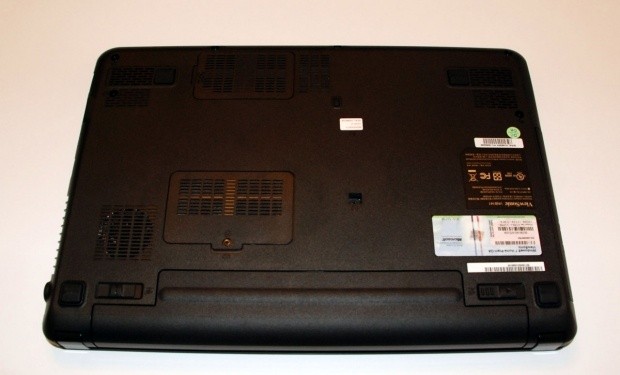 The bottom of the notebook has the cooling grates and covers over the RAM along with the battery release.

For the movie-encoding test I take the HD Microsoft Magic of Flight video and encode it to DVD quality video with CD quality audio using Windows Media Encoder. The ViewSonic VNB141 notebook scored in the middle of the notebooks I have tested, which is where I expect an ultraportable geared more for battery life to fall. Check out the chart below for the full results. 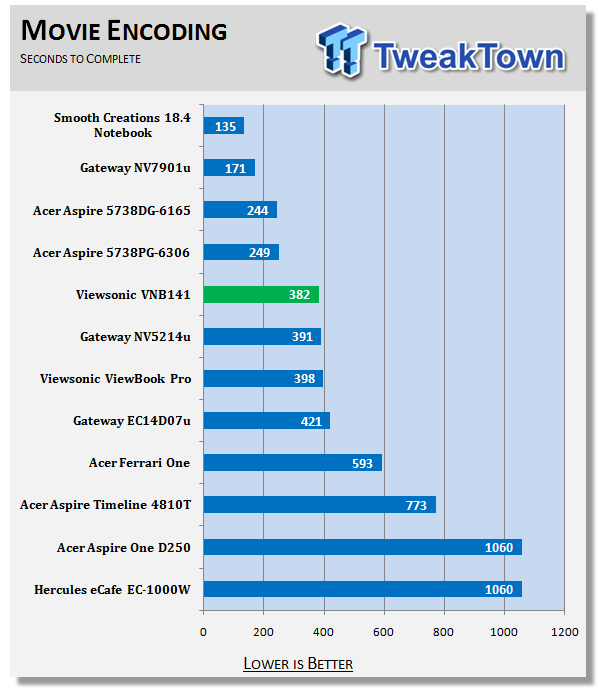 The machine was only a few machines from the top of the chart in this test. Check out the charts below to see how well the VNB141 performed in battery life. 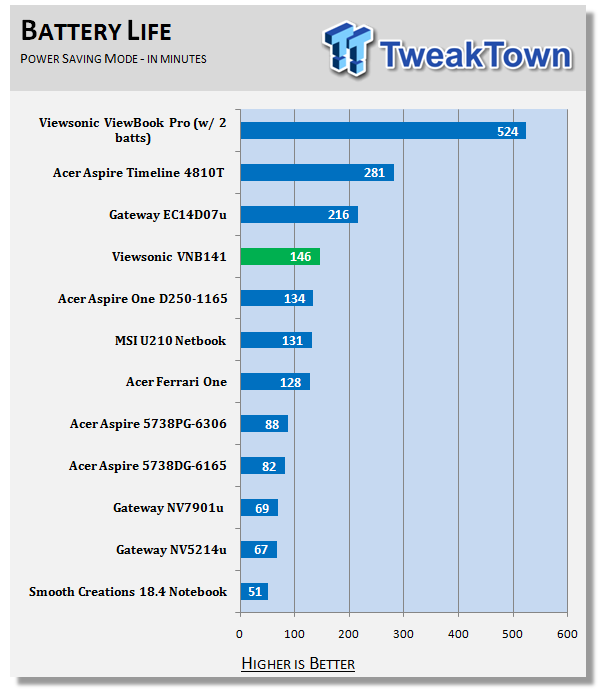 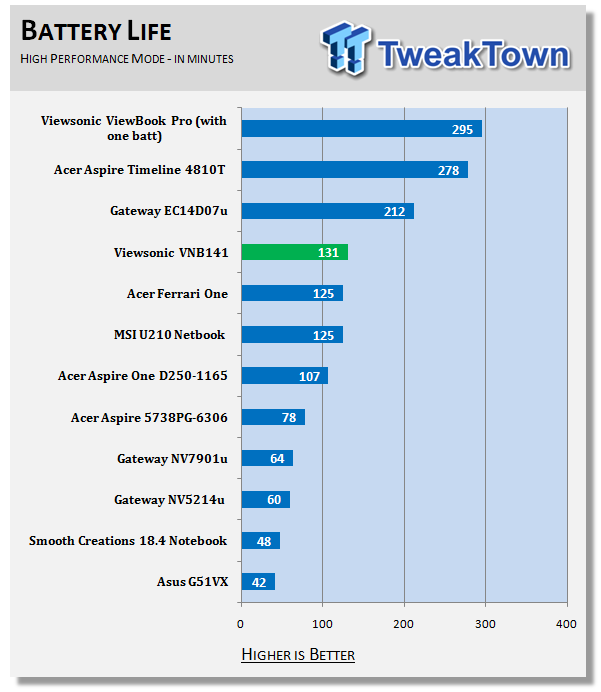 For the iTunes encoding test I take the Stone Temple Pilots Core CD in MP3 format and encode it to AAC format using iTunes and time the results with a stopwatch. The ViewSonic VNV141 was in the middle of the pack again in this test. Check out the chart below for the results. 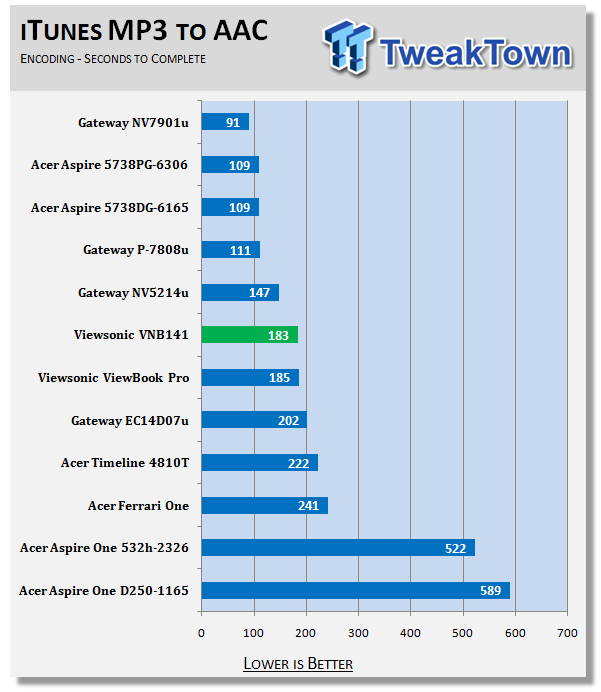 Hands On with the ViewSonic VNB141

Now it's time for my favorite part of the review; hands on use. The ViewSonic VNB141 is a nice looking little notebook, but the rig really has nothing that makes it stand out. It's a nice machine, but rather boring and it lacks any special features like its little brother the Viewbook Pro packs in that make it stand out from the crowd.

The ViewSonic VNB141 has a decent screen with acceptable color reproduction and decent contrast. The screen isn't the best I have seen, but it's not the worst either. The screen has loads of glare, but so does just about every other notebook on the market.

The keyboard is decent with good typing feel, well-spaced keys and good tactile feedback. The track pad is large and placed well so it isn't in the way when you want to rest your hands on the palm rest area. It is accurate and otherwise unremarkable. The little notebook has an anemic sound system, which is very common today on notebooks. However, it can muster enough volume to watch movies without the headphones if you desire.

The best thing you can say about the ViewSonic VNB141 is that the machine is sized to be portable. It's a lightweight machine and it has decent battery life. All in all the ViewSonic VNB141 is a solid notebook with average performance that does nothing to separate itself from other machines in the field. You will buy this machine based on price alone and its price is too high for its performance.

The ViewSonic VNB141 is the character actor of the notebook world. The machine works ok and is decent at what it does, but it blends into the background and is simply forgettable. The best thing you can say about the machine is that it's lightweight and easy to take on the road with you and battery life is decent.

If the machine were about $200 cheaper, I would be much more excited about it. As it is, the ViewSonic VNB141 is a middle of the road notebook with a price that can buy you a superb machine.