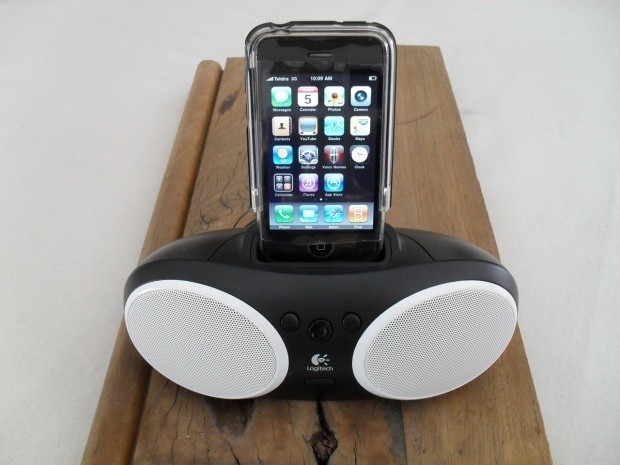 Logitech have been around for a long time now and produce some of the most well made gadgets and speaker systems for your PC.

They have also been busy producing some fantastic mouse and keyboard solutions, too. You might call Logitech the 'all-rounder' of all things multimedia.

Today i have one of their newer products, the small and lightweight S125i speaker dock for use with Apple's ever growing range of portables and smart phones.

Let's get a move on and see if Logitech can continue supporting their solid reputation with another winner. 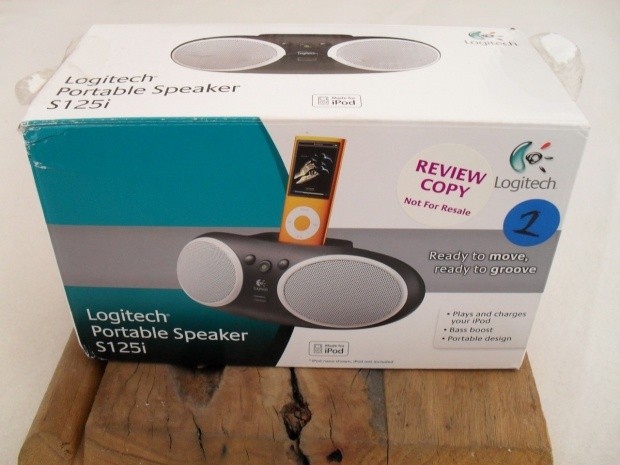 Now that we know what we are dealing with, let's take a closer look at the package and contents and see what's included. 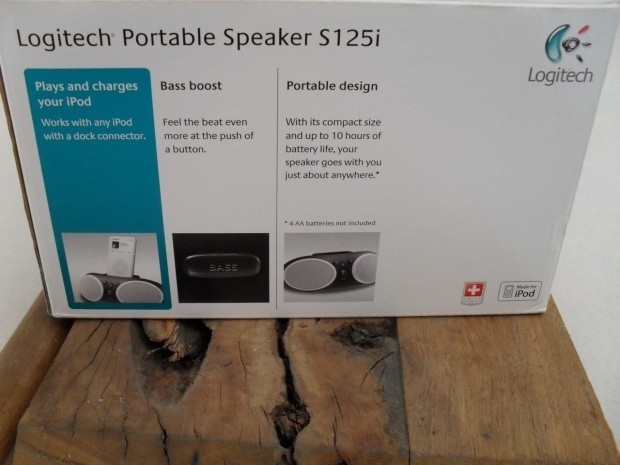 The small white box this product comes in does not waste space by any means and includes what has become Logitech's trademark colour scheme. 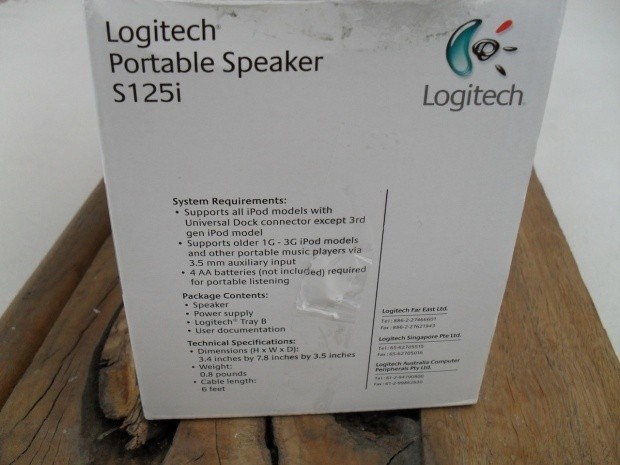 Inside the package you will find the dock itself along with a power adaptor used to connect it to the wall and two pieces of documentation. 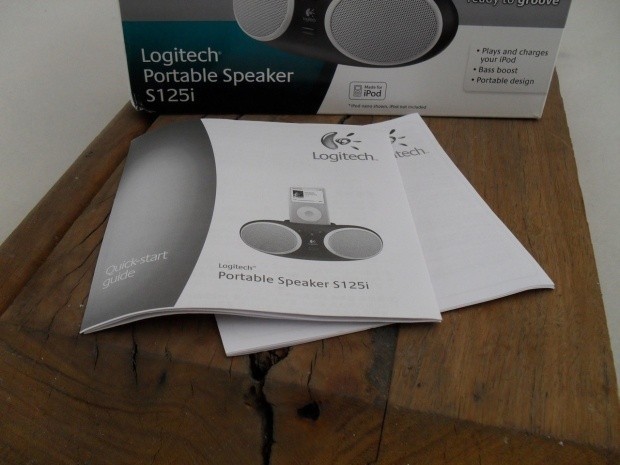 These two pieces of documentation include a warranty booklet, should the user run into any problems with the product, and a user's manual to outline the basics of setting everything up for the first time.

This unit can also run on AA batteries to allow for use on the road. They have not been included with the package, however.

Given the simple nature of the product, that's all there really is to discuss here. 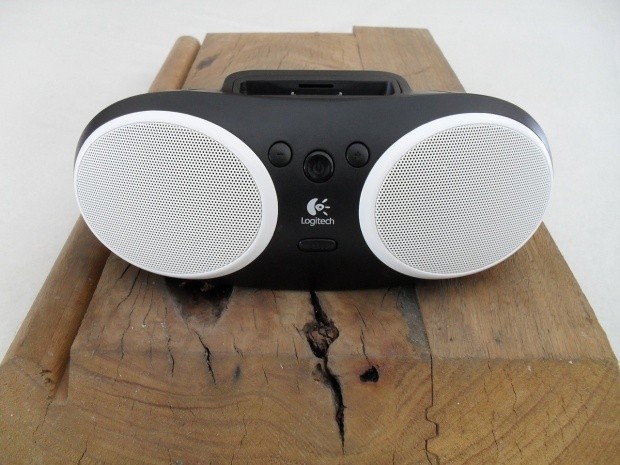 Unfortunately we have not been given a whole lot here from Logitech in terms of system specs to go by. However, I can add that the speaker drivers are approx 2" and the frequency response would be around 600Hz through to 16KHz, just as a guess based on systems I've tested before. 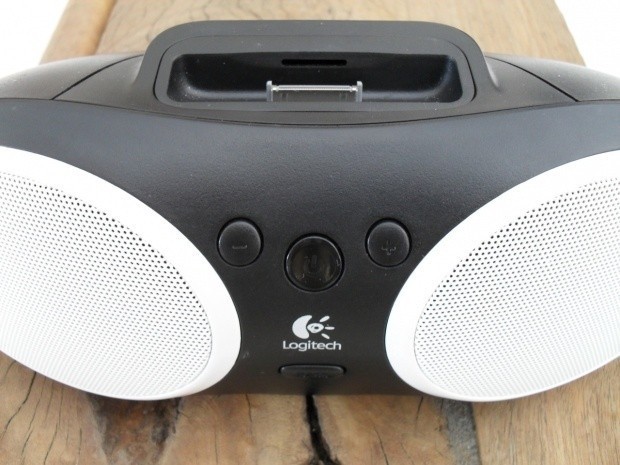 Also included is a second connection option in the form of an Aux input in the rear, which would allow for just about any portable device to be connected to the unit failing the use of an iPod.

There is also a 'bass boost' button available which allows the user to add an artificial EQ tweak in order to boost bass to around the 500-1KHz range. 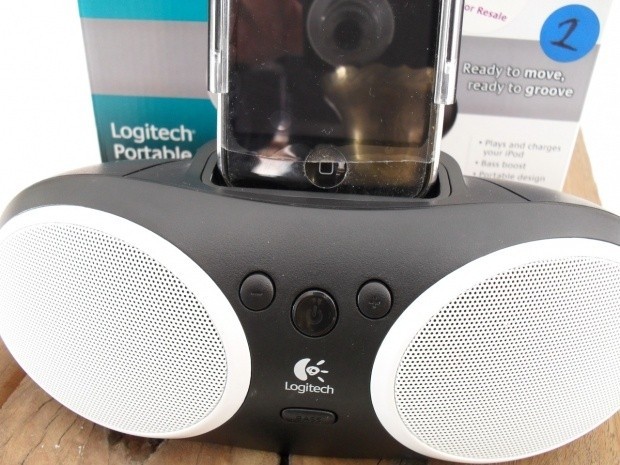 There is no remote control included, but one can be sourced out from Apple if the user is so inclined. Higher end models from Logitech also include remotes.

The unit is built from rather high quality molded plastic and should provide some protection against internal rattle caused by bass as well as accidental bumps and drops.

Now it's time to plug everything in and see how things sound out of the box. 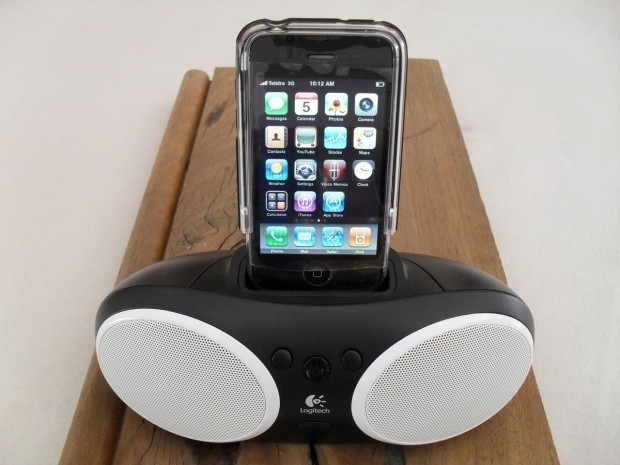 Once the dock has been removed from its box we can power it either by using four AA batteries or with the supplied power adaptor. 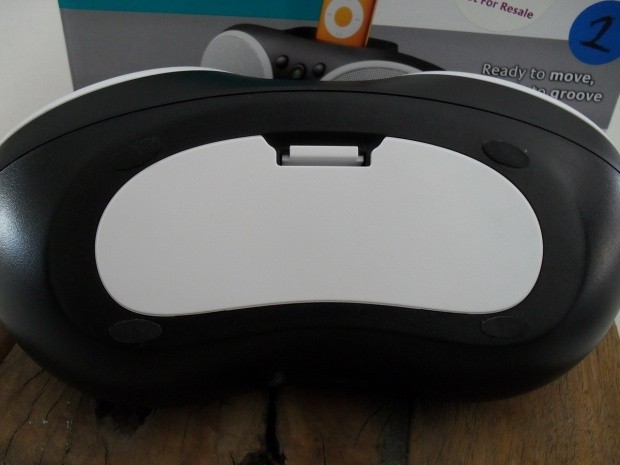 Connection is simply a case of docking your iPod or iPhone into the unit and using a combination of both controls to allow music to be played back.

If the Aux connection is to be used, a dual stereo to single mini-jack cable must be sourced out by the user. The connection can easily be found on the rear of the unit next to the power connection. 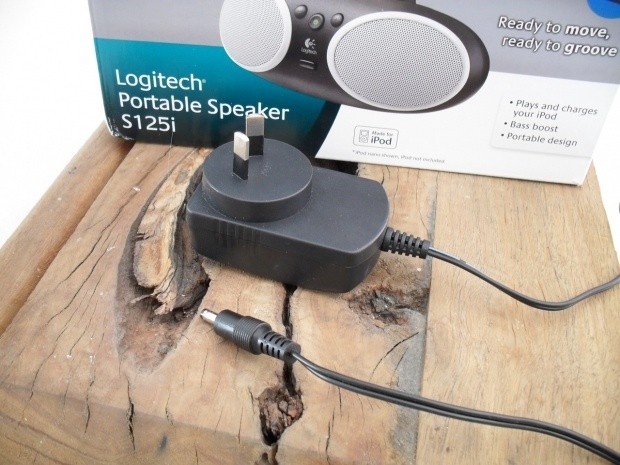 Since we are not dealing with any software or other complicating variables, things should go very smoothly and be up and running in moments.

The only concern I had here was how my iPhone sort of 'hung' above the unit connected by Apples proprietary 30-pin connector, meaning that all there was in terms of support was the connection itself, which is fine as long as the unit does not get bumped around and the connection is not wobbled from side to side.

There was also the somewhat annoying foible, which dictated the iPod or whatever device must be powered down while in the dock, otherwise it will always be automatically powered on (by the dock). This can actually be more of a hassle than one might imagine.

Another quick point here; when the dock is seated on a bench or wherever, due to its very low weight it is actually very easy to slip and slide around when using the buttons on the front.

Overall, though, the setup was as simple as any dock, just like it should be.

It's time to find out how the S125i Portable Speaker sounds in the real world. 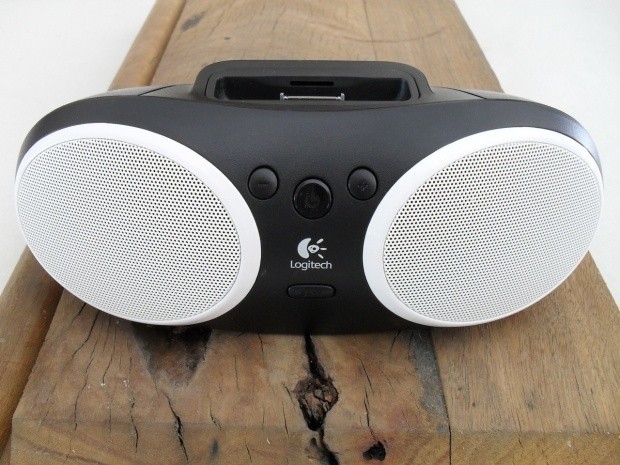 Given that the Logitech S125i uses small full range drivers to handle the entire frequency range, it's going to be interesting to see how well the high-end is represented. 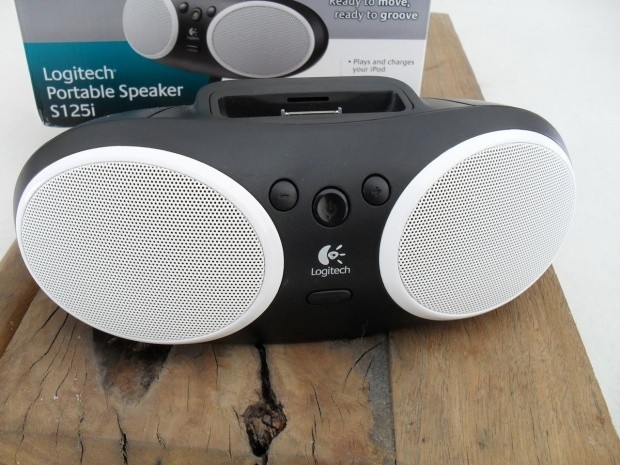 During my testing I found the high-end to be surprisingly good considering the (size) constraints involved. These frequencies were reproduced with quite good overall clarity and in a fashion that was not too overwhelming for the user.

I found myself to be quite impressed with them overall. However, when the bass boost function is used things begin to become a little bit muddled up and lost in the whole mix. But i guess this is a compromise that must be decided upon based on what is being listened to.

In situations like this where ultimate performance is traded with functionality and a full range driver is used instead of a dedicated tweeter, the best that can be hoped for is something which allows for a comfortable listening experience and I think Logitech manages that here.

Arguably this is the area where the S125i comes into its own, largely due to the small (approx 2") driver being used which should be the perfect size for some decent warm midrange.

During testing at low to mid volume range the S125i is capable of producing some decent sounding mid range frequencies when everything is taken into account. Although the same issue with the bass boost button is again present here, it does not interfere too badly with what's being heard and of course it can be easily switched off.

I guess the decision about whether this button gets used or not will depend on the music choice and the person listening. However, I would recommend for maximum audio quality that it gets left off unless absolutely necessary.

Bass is an all-important factor with any sound system, whether it being a dedicated music system or multi-purpose home theatre.

During my testing of the S125i system I found bass performance to be the most compromised by the use of the small 2" full range drivers.

Unfortunately without the use of a larger driver dedicated to producing low-end information, bass response is going to be limited for the most part.

When listening to certain types of music this becomes less of a problem, but unfortunately there is not a lot of music that I listen to personally that fits this criteria.

The S125i from Logitech is an interesting product, if nothing else.

It is well built like pretty much everything else from the company, uses decent materials and has just enough features to make people take notice.

Sound quality is directly related to what's being listened to at the time and will vary between sounding good in a small environment close to the listener to sounding really quite distorted at louder volumes with other types of music.

However, with that being said, we all know what $70 buys in these times, which is not much at all and on that basis the S125i works for me.