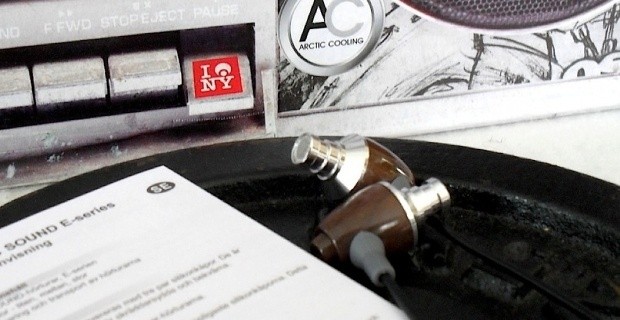 First, a little background on Arctic Sound from last time we checked out one of their products.

Arctic Cooling is the parent company of Arctic Sound whom is responsible for the product I'm looking at today. Arctic Cooling are a Swiss company who specialize in a variety of innovative, high quality cooling products which are also very quiet.

According to the company 'PR' the Arctic Cooling team consists of some very highly educated 'folk' with business, technical and communication skills to boot. Perhaps even some of the country's watch making prowess may have washed over into the shores of Arctic 'land'.

With that said, though, the skills used to make things quiet and cold (something the Swiss are great at naturally) is not going to be what's called upon when designing a pair of high quality 'ear phones', but that's just what they have done with hair splitting accuracy like any great Swiss time piece. 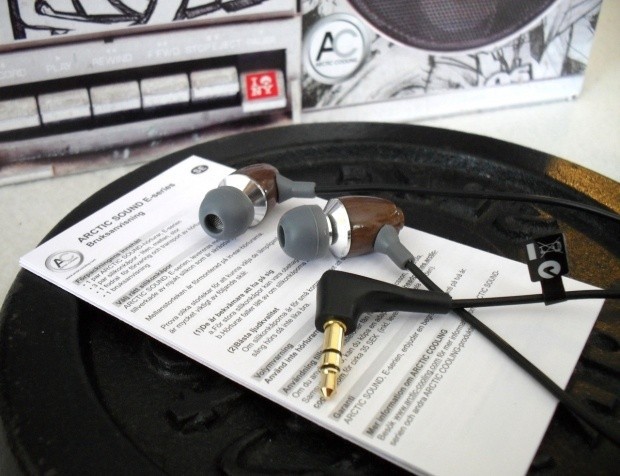 Right then; let's take a close look at the contents of the package and see what's included.

The package the new E352's come in is slightly different to that of the previous model I tested. One of the first differences that is noticeable is the inclusion of some 'product sprooking' on the front claiming enhanced bass as well as mentioning sound definition and noise isolation as features this time around. 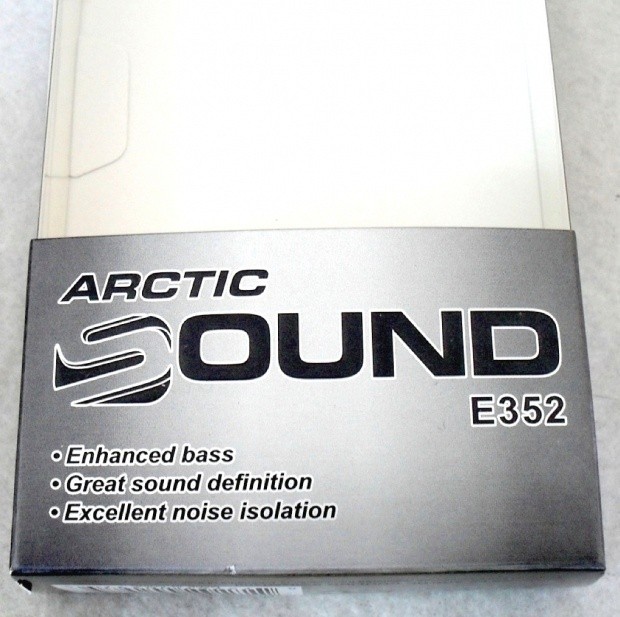 Further to this, the buyer will be aware that the E352's do not mention iPhone compatibility like their predecessors . However, since they use the same connection and do not require software, it would be hard to see how they couldn't.

They have also omitted the world's smallest microphone from this incarnation. Perhaps someone sneezed in the factory and lost them all. That's basically it for any changes to the livery.

I personally would have liked to see a packaging scheme that allowed the buyer to easily spot the key difference between the two models, that being the wooden chassis. But not to worry, the box looks fine to me.

Since the last pair I looked at things have not changed a whole lot. Output power stays the same, as does impendence, cable length and connection type. However, we do see a change to the frequency's response with a lower, or as I like to call it, more accurate rating of 18Hz - 22KHz.

Gold plating is used on the plugs for the highest signal quality between devices connecting to one another. Also featured is compatibility with several of the large mobile phone brands out there. And finally, a two-year warranty, which is a nice touch, I feel. 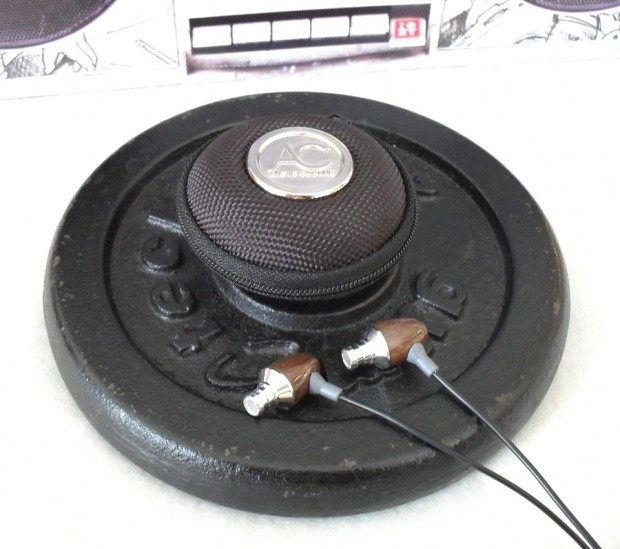 The most notable change here is of course the wooden chassis used instead of the aluminum one. However, I cannot see any specific information regarding the choice to use wood other than 'warm sound definition by exquisite wooden chassis'. So, clearly Arctic Sound thought they were onto a winner, but equally did not want to give too much away.

Generally in the construction of a wide range of loud speakers, wood or more especially medium density fiberboard (MDF) is thought to be best. This is then covered by a thin veneer of the wood that serves an aesthetic purpose for the final outer layer. 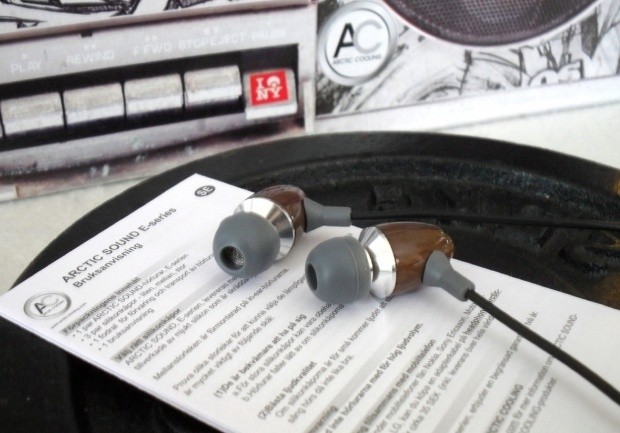 Frequency reproduction whilst certainly toned down from the last model I tested, is still quite an optimistic figure to behold coming in at 22KHz, at the high end.

Like the previous model, the E352's are quite light to hold and should not require a football players neck structure to be enjoyed. Even when considering that wood has been used in their construction, the weight does not increase from the feather-like 5 grams.

When it comes time to start using these ear phones, there really is not a whole lot that has to be done in order to get them up and running, given their simple nature. It's simply a matter of deciding which device to listen to; in my case, a G5 Mac.

Once the ear phones have been removed from their package, it would probably be an ideal time to test fit some of the other silicone ear inserts to find out just how large (or small) the inside of your ear really is.

As is the case with the 361's, Arctic Sound have included a choice of different sized silicone inserts to ensure the correct fit of the E352's. This is important with all ear canal fitting 'phones'. 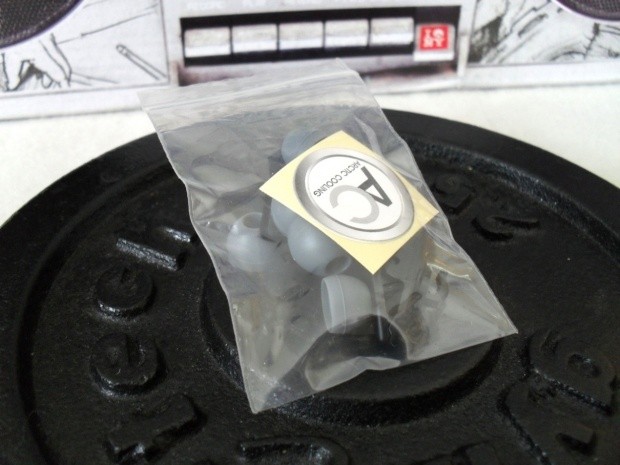 To begin with, the product comes fitted with the medium size, but why not take a moment to have a play with the different sizes provided and find the one that works best. Fitting the correct size to your ear will help block out unwanted external noise, as well as providing the aforementioned 'air tight' seal to the buyers ear canal.

Next will be physically connecting the earphones to your system. The only thing I must warn you about here is the need to source an extension cable if they are to be used with a computer system rather than a mobile phone.

Unfortunately the cable provided with the system is unfathomably short. I was saved during testing by my 'Steelseries Siberia' extension cable (again). 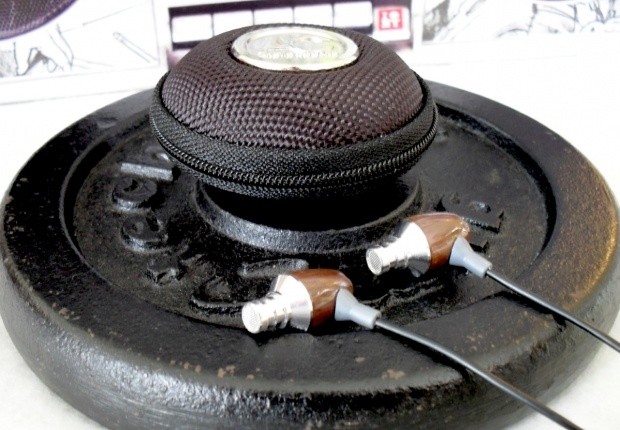 Had it not been for the latter, I would have had to test with my head on the ground next to my case, which would have been even just a bit less fantastic than last time.

So, As you can see, the E352's suffer the same problem as the E361's. There is simply not enough supplied cable to be suitable for a wide range of devices.

Since we are not dealing with the worlds smallest microphone with this model, let's move onto some testing and find out just how good that wooden chassis sounds.

Time to find out how these things sound in the real world. 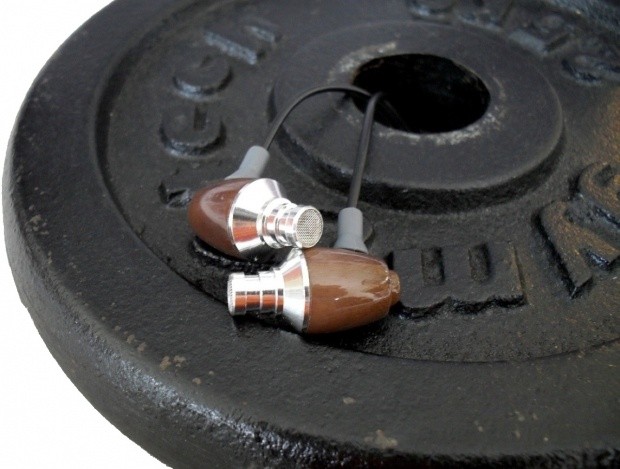 Continuing on from my testing of the E361's, I found the high-end to be balanced and non-invasive to the listener.

Again I find myself comparing the performance to that of the very expensive Razer Megalodon, which uses a whole 'headphone' design to achieve this impressive high-end performance.

Let me re-iterate this point; finding a good balance of high-end frequencies with other lower frequencies in a configuration such as an ear phone is no mean feat. And this is due largely to a need to rely on a single driver to do the bidding. 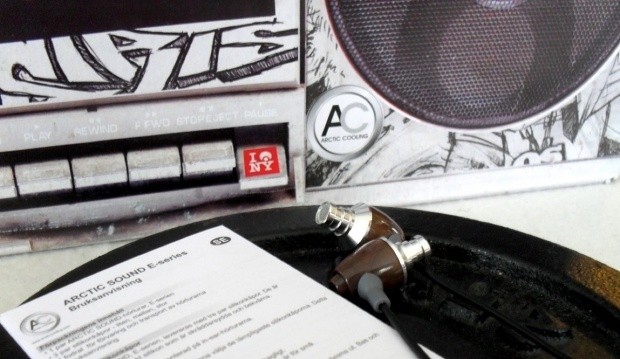 Now, without going into such detail as to lose everyone's interest, I'll simply add that both of these models from Arctic Sound pull this off seamlessly.

Now, of all areas this should be one where the use of the wooden chassis' comes into its own by providing warmth and timbre to the sound. For the record, timbre just refers to how well a product creates the full-bodied warmth found when listening to a percussion instrument. 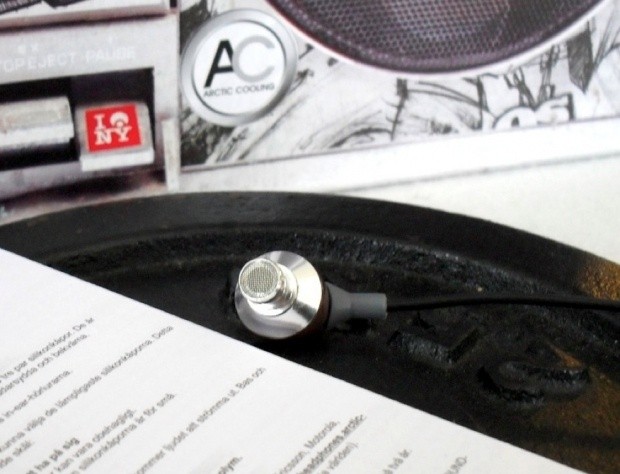 And I was once again impressed in this area. Although not blown away, I could feel that 'woody' tonality coming through which not only adds to musical enjoyment, but takes away from the overwhelming nature of having the music being funneled into your brain cavity.

Bass is an all-important factor with any sound system, whether it being a dedicated music system or multi-purpose home theatre.

Much the same as mentioned above, this is also an area where the use of a wooden chassis should prove providential.

I found the low-end to continue on from the impressive performance offered by the E361's. Low-end was robust and full during the listening tests I ran and even managed to achieve an omni-present quality usually akin to full sized subs with large drivers capable of dispersing bass wide and far. 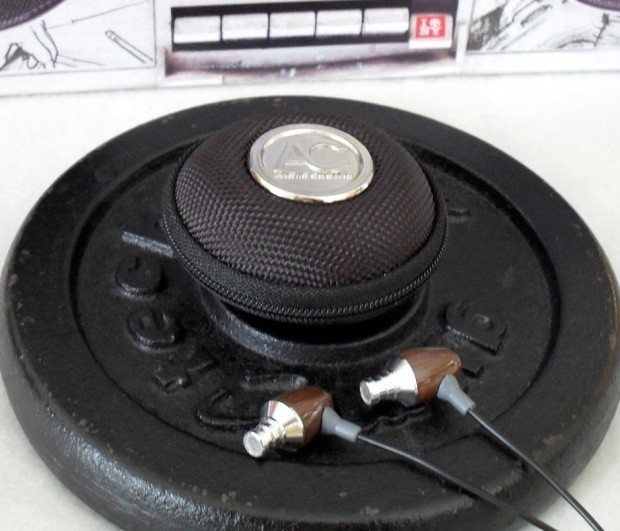 Honestly, though, I did not feel that I preferred one set over the other. I feel that they both have the ability to produce fantastic low-end for whatever purpose they are required for.

So, did the use of a wooden chassis make the difference here? Well, yes and no. It certainly did not detract from the already high marks given here last time. But for me it's more of an innovation in its own right than a case of better or worse.

Another great effort by the Swiss techno boffin's Arctic Cooling (Sound) is afoot in the form of the E352's.

None to mention really; it's a pretty slim package, but I was not really expecting much more than the basics. There is, however, that little sticker mentioned in my last article, which is as modest and understated as ever.

Let's also give a special mention quickly to the carry case given with these headphones. Although the zip broke when testing the E361's, it's a good little extra that is really to prevent the thin cable from being bent excessively. Have a look below. 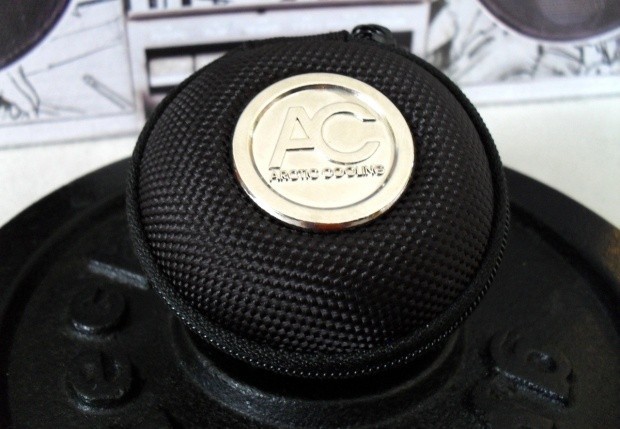 The E352s pack just as much punch as the E361's that came onto the test bench before them. 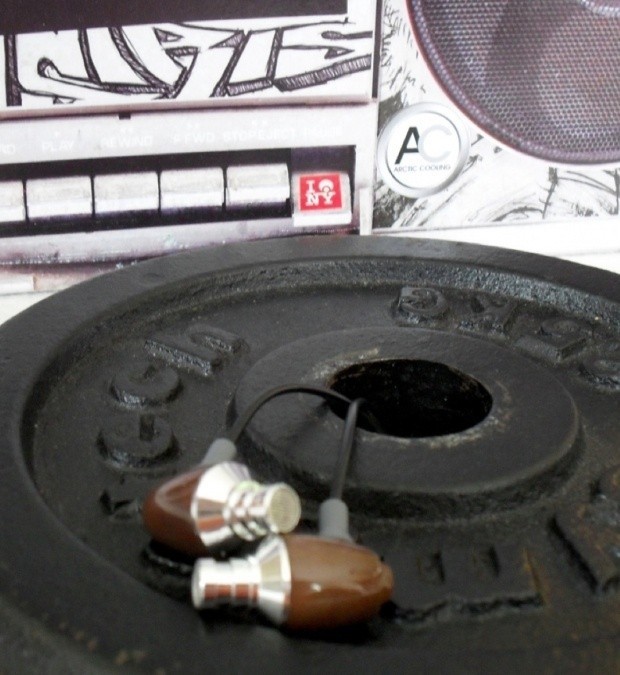 However, this pair of earphones carries a few different characteristics to their sonic signature this time around thanks to wood being used to make the enclosure chassis rather than aluminum as we saw last month.

For a price of around $70-$80AUS, the Arctic Sound E352's are a strong performer as I would have expected after my results in testing the E361's.

The microphone while not included in this model, is not missed much personally, but I do have several vendettas against these types of 'quasi' microphones, so perhaps some will wish it was.

So, to offer a conclusion here, the audio quality from the E352's is top notch. It takes the impressive performance already proven in the E361's and makes it better.

Anybody with a love of audio will appreciate the use of wood for the enclosure chassis and until now i have not personally seen it before. 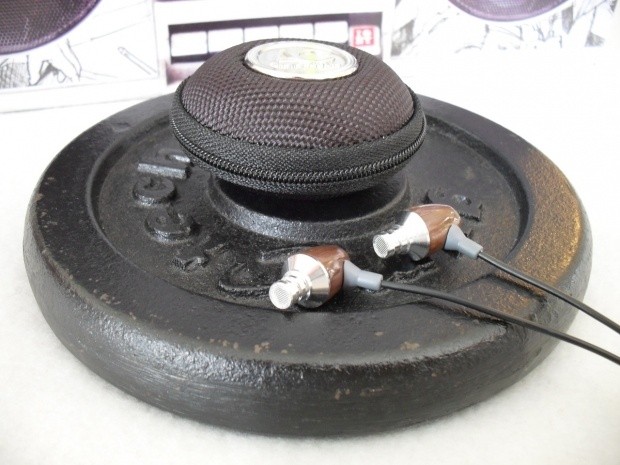 The performance of the low end is great, creating some of the most impressive omni-directional bass I've heard that literally fills your head.

The asking price is pretty good considering what's on offer and hopefully they will be available soon.

Keep an eye peeled for Arctic Sound in the future; I hope they can expand on this impressive start with some speaker systems before too long.