Kingston has a reputation for creating some extremely high quality memory. What this means is that we tend not to see the company jump on the speed train as quick as some other makers do. They want to know when they release a module that it's going to run 100% across many platforms.

Due to the nature of this, what tends to happen is we see only major step-ups in speed. To give you a better idea from Kingston, we see at the top of the table the 2133MHz DDR kit we have with us today. Moving downwards and we've got 2000MHz which was a major release, while below that there are 1800MHz DDR, 1600MHz DDR and 1333MHz DDR modules.

When we look at memory from other companies, especially those focused on constantly having the fastest kit out and being the first, we see releases like 2100MHz DDR, 1866MHz DDR and more.

Performance memory is just a small market for Kingston, but when they do it they do it right. So, with a PC3-17066 kit hitting the line-up, let's see how it performs. Before that, though, let's quickly look at the package and the modules themselves. 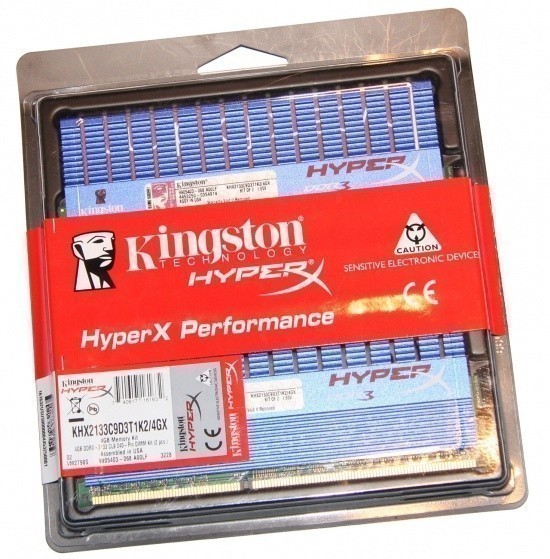 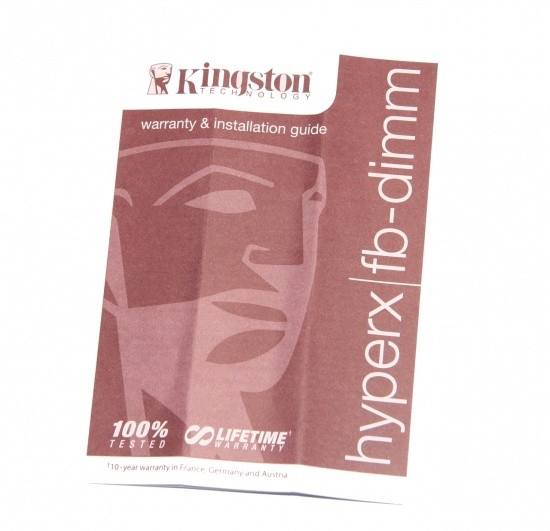 Having a quick look at the package, we don't see anything that we haven't seen before. We've got the bulk of our information on the bottom left hand corner which tells us the model and size, while at the same time we've got a clear package that lets us see the modules.

Checking out the modules, you don't see anything new here. We can clearly see that Kingston are using the same HyperX heatsink that we've seen for ages. To be honest, though, if it ain't broke, why fix it? - It's a really nice, high quality heatsink that does a good job of keeping the chips cool. 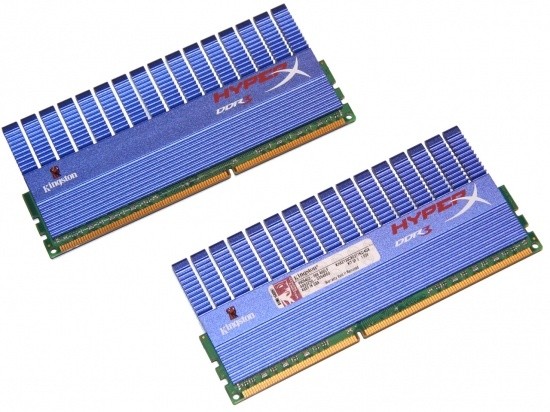 Each side of the heatsink is almost identical with the HyperX, DDR3 and Kingston logo being on both sides. One side does have a sticker on it that gives us similar information to what we saw on the front of the box like speed, size, model number etc.

Having a closer look at the sticker, you can see the Genuine Kingston logo along with mention that the kit is assembled in the USA. On the right side we can see the model number; what that number tells us is that we're dealing with a 2133MHz CAS 9 kit with two modules to make up 4GB. Below that we have mention that it's part of a kit of two along with the standard voltage.

In hoping it was going to be no fault to the modules themselves, we tried the 178 BCLK and we got into Windows without an issue. It's a little bit of a pain, but it's no fault to Kingston; it's more a multiplier issue.

The problem is that if the kit was a 2000MHz DDR one we could set our BCLK at 200 which would push the CPU speed up while keeping the memory at that 2000MHz DDR number. Instead, while we have more MHz on the RAM, we have had to drop off the CPU MHz which can skew our results slightly. We'll talk about that more in our benchmarks, though. 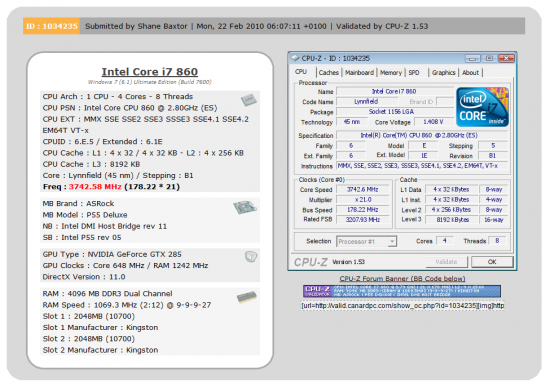 In the end, getting to 2133MHz at 9-9-9-27 wasn't an issue when we calmed the CPU down. We didn't expect anything less from Kingston, so getting the stock clocks out of the box with no issue came as no surprise. 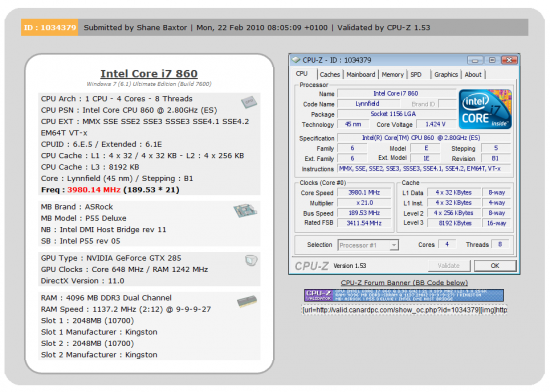 When it came to overclocking we had some joy increasing the clocks from the standard 2133MHz DDR. Keeping the timings the same, we managed to achieve 2274MHz DDR which is a good 140MHz DDR over the default speeds.


Important Note: When modules are overclocked we adjust the BCLK which not only lets us fine tune the MHz out of a module, but in turn increases the overall CPU clock speed. While we always make the effort to include the BCLK and CPU Speed in our graphs, please just make sure that you make note of these when looking at the results. In some tests that don't purely test the memory speed, the extra MHz on offer from the CPU can increase the result. Of course, it's also worth noting that having faster memory gives you the ability to run your CPU at a higher speed. 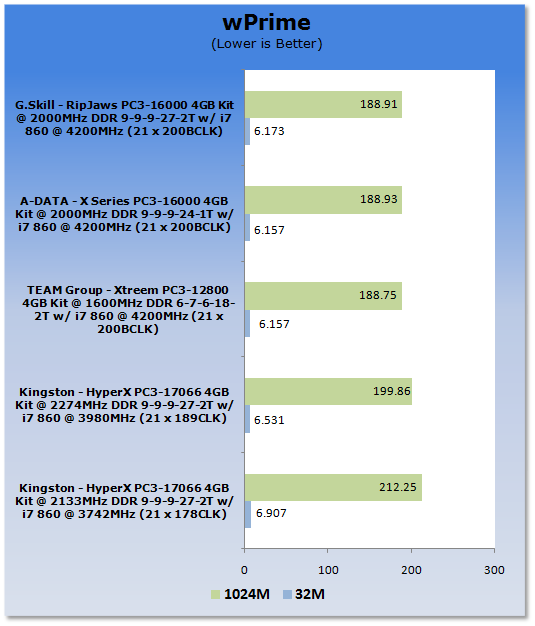 You can see due to the clock speed of the CPU the HyperX does fall behind when compared to some of the other kits. Looking at just the HyperX, though, you can see when we start moving up the MHz table performance becomes stronger. But even when overclocked we're over 200MHz behind the other kits in CPU clock speed. 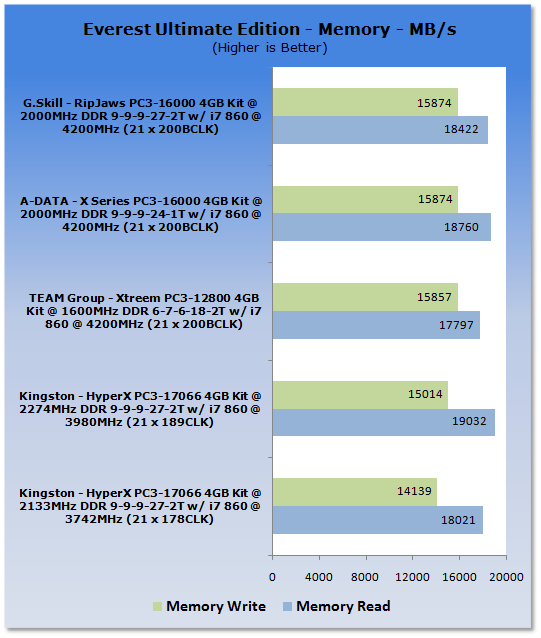 Moving away from something that relies on the CPU and more on the memory, we can see the Kingston kit performs stronger with it putting out the highest read time when overclocked. The write time is a little lagging, though. 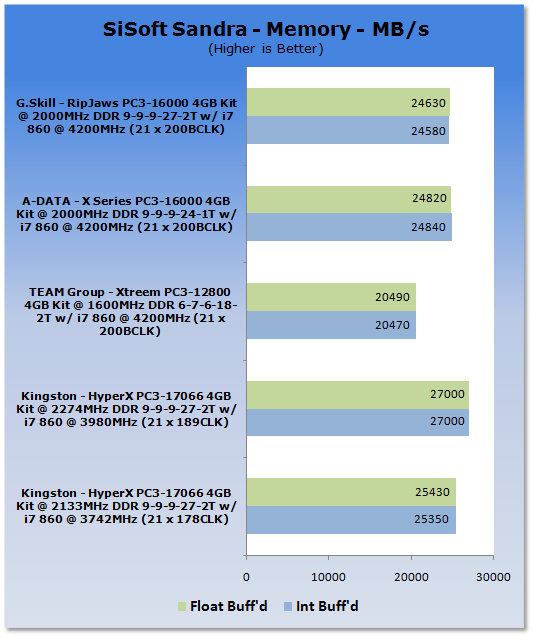 Looking at Sandra, we can see that the memory numbers are good. The Kingston kit out performs all the other kits even when the CPU is slower. When we crank it up, though, the kit really shines putting out some very nice numbers. 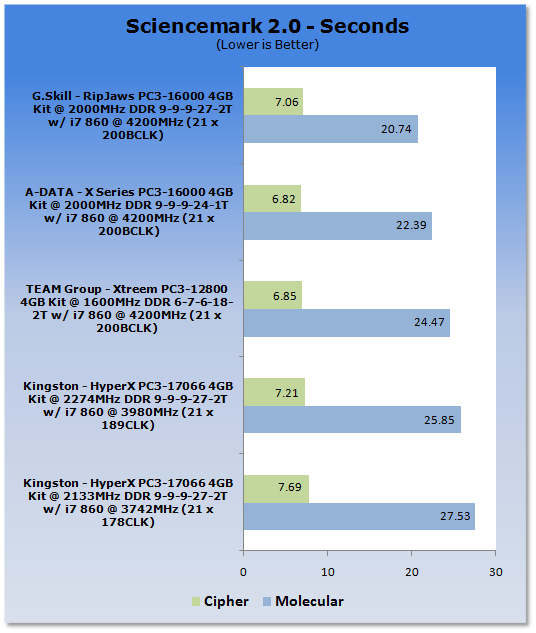 We again see the Kingston kit really lag behind because of the slower CPU speed. While as we do move up in speed it does improve, because of the extra 200MHz on the other modules its numbers are still down. 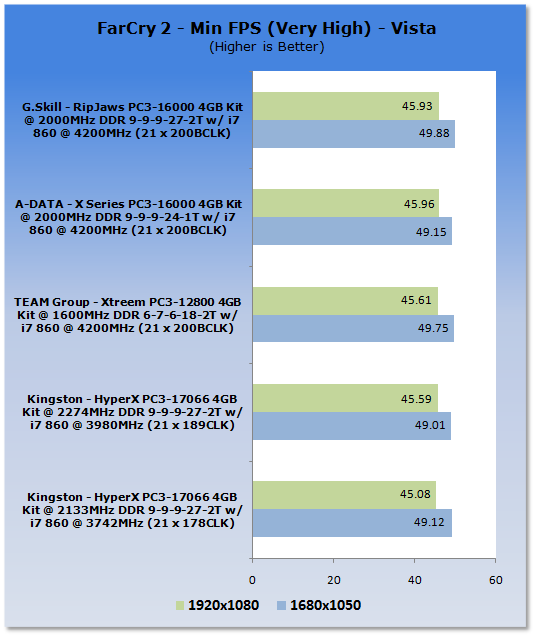 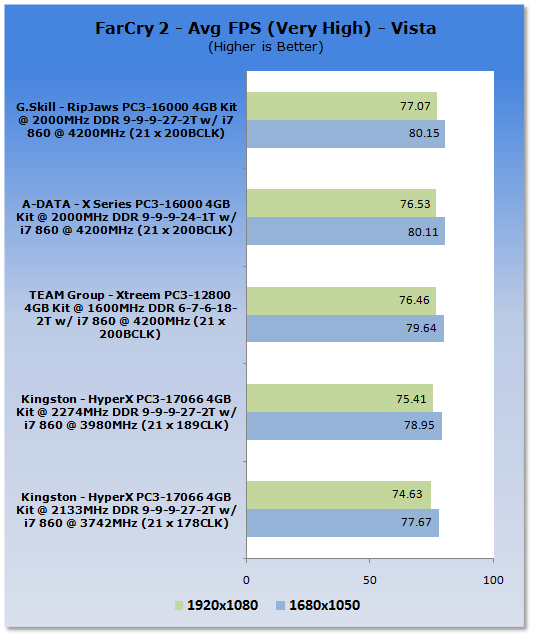 Across the board we can see performance is very similar with all memory setups which doesn't come as much of a surprise. Really, for the most part you couldn't call a clear winner.

At first glance the Kingston kit doesn't look fantastic. If you really begin to break it down, though, and look at the graphs, you see that in the memory benchmarks the Kingston kit performs very well. The kind of kit it is and its default speed means that you really want a CPU that can handle the high BCLK to get the most out of it.

Fast memory is great, but until you couple it with a fast CPU you can't really make full use of it. CPU speed is extremely important these days, especially due to the fact that we've got such powerful video cards available.

When it came to overclocking it was surprising to see the kit get such a nice little overclock that equated to an extra 140MHz DDR which is really nothing to sneeze at.

Kingston continue to do what they do best, they bring a good quality, fast memory kit that just works. The heatsink as always is top notch quality and feels great. Performance is good, but there's no doubt that you'll want to make sure you have a decent CPU that can overclock. In saying that, you want to have a decent CPU when it comes to any of these high performance kits.

If you're looking for something that's a bit faster than 2000MHz and is of top notch quality, the HyperX kit from Kingston can't be passed. At $239.99 over at Newegg it's not a cheap kit, but if a quality 2133MHz kit for your P55 machine is what you're looking for, make sure you have a look at this Kingston one.