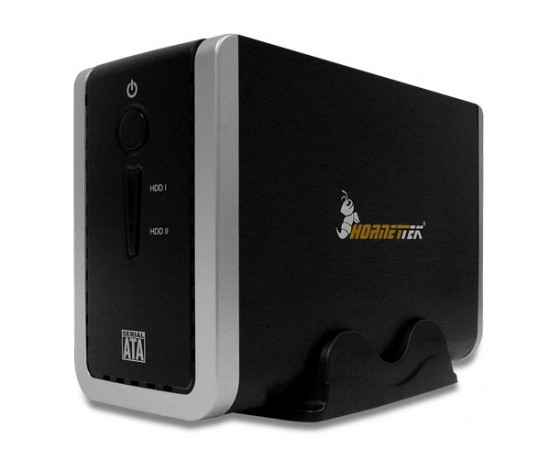 
If you are reading the pages of TweakTown then most likely you have already fallen victim to the New Digital World. The NDW has changed the game completely, the way we shop for content, the way we view content and once you have acquired enough of it, the way we manage our content. Just having a few songs on a hard drive isn't cutting it anymore. Now we are buying nearly all of our music, movies and even books online. Managing all of the content is the real trick and we all can relate to the trouble that follows when a drive goes down for good. Because of this, the real key is to manage your digital content with redundancy.

Most users are generally fine with just storing their content on one standard hard drive until they have a loss of data. At that point your eyes are opened to just how vulnerable you are to a personal digital disaster. If you want to know what it is like, just go to your own storage folder, highlight everything and hit DELETE. It can happen, it does happen and it isn't a matter of if, but when. Preventative measures are the only way to avoid such losses and the easiest defense is a good offence.

Of course, I am talking about digital redundancy most commonly known as RAID. RAID allows our data the chance to survive a disaster. It turns earthquakes into bumps in the road and along the way you have the peace of mind to go forth with everyday life as if your address was on Cloud 9, at least when it comes to your digital content.

Today we are going to take a look at the HornetTek X2-RAID. This product will allow you to keep two hard drives in one of many forms of RAID (we will go over the full capabilities on the next page) and do so at a low cost. The X2-RAID uses a common eSATA connection to your PC that is much faster than USB or FireWire, so you still retain desktop drive speed while having the security needed to survive a drive loss. 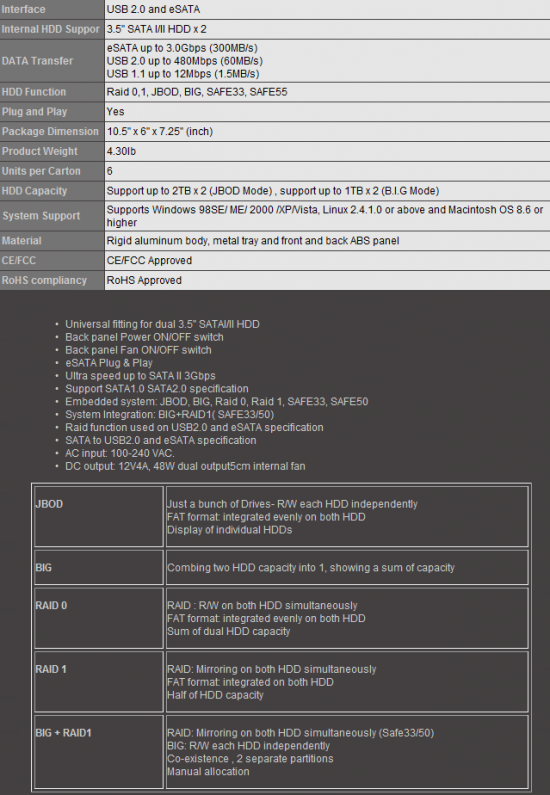 The HornetTek X2-RAID is an easy to use yet powerful fully functional RAID storage device that uses the Silicon Image Sil5744 processor/chipset combination for native SATA 3Gbps connectivity to a host computer.

HornetTek has targeted the home user for this product so you will not need to worry about extensive setup parameters or complicated software. The system is designed so if you don't want to install software, you can set the RAID level on the enclosure itself.

MWAVE in the US sells several products from HornetTek, but has yet to show the X2-RAID on their website. They do show the X2-U2S, a USB version that uses the same enclosure, but only supports JBOD or the BIG as well as only connecting via USB 2.0 for only 39.98. Because of this low price, we don't see the X2-RAID costing a lot when compared to what is already on the market. 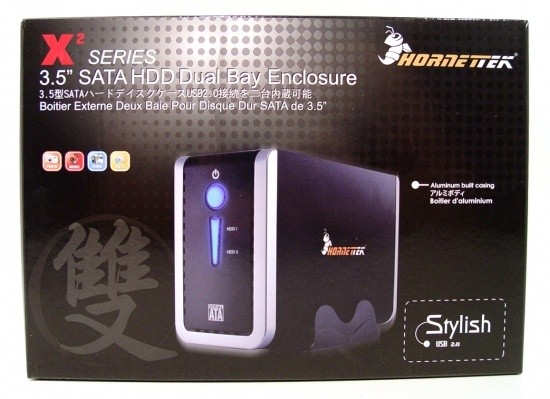 We have taken a look at a few of HornetTek's products last year and always found their packaging attractive. The X2-RAID is the same way; the company has done a really good job showing the product right on the front of the box. 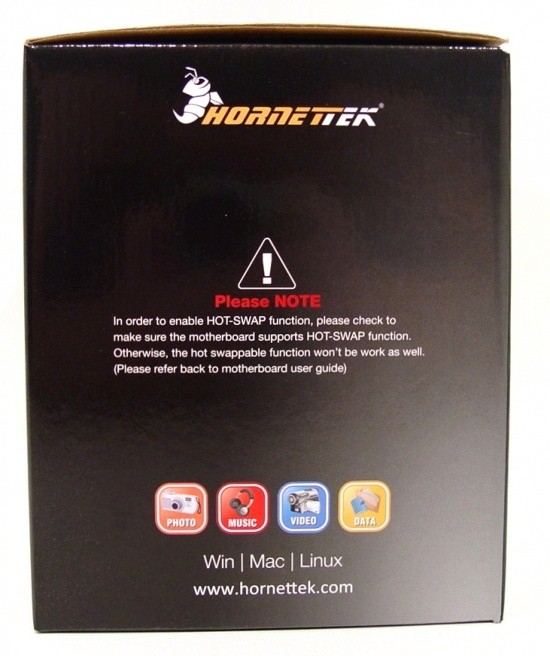 The side of the box shows a warning about using the Hot Swap function. 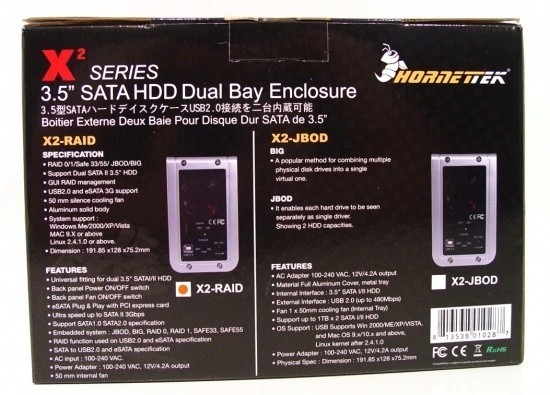 The back side of the box shows the features and specifications for both the X2-RAID and X2-JBOD. 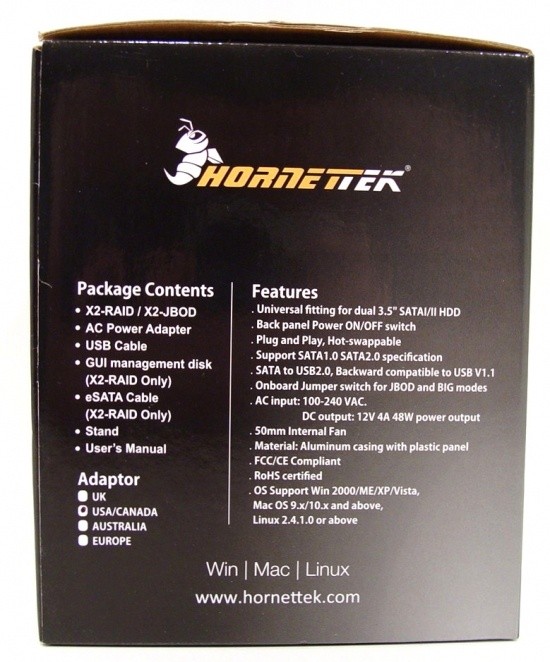 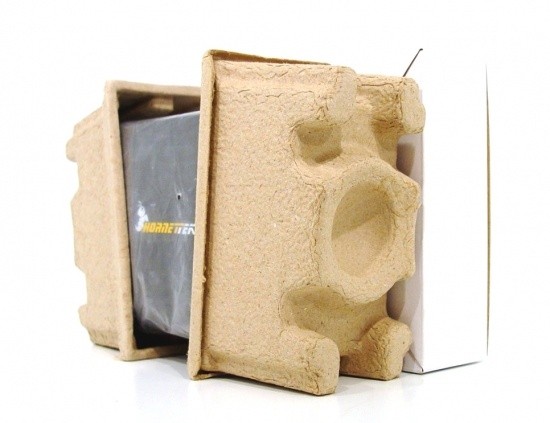 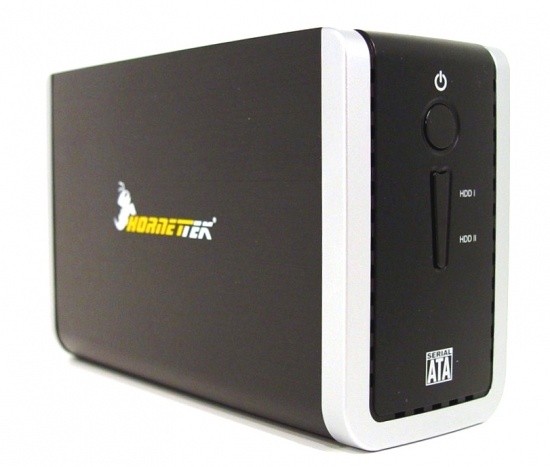 Here we get our first look at the HornetTek X2-RAID. 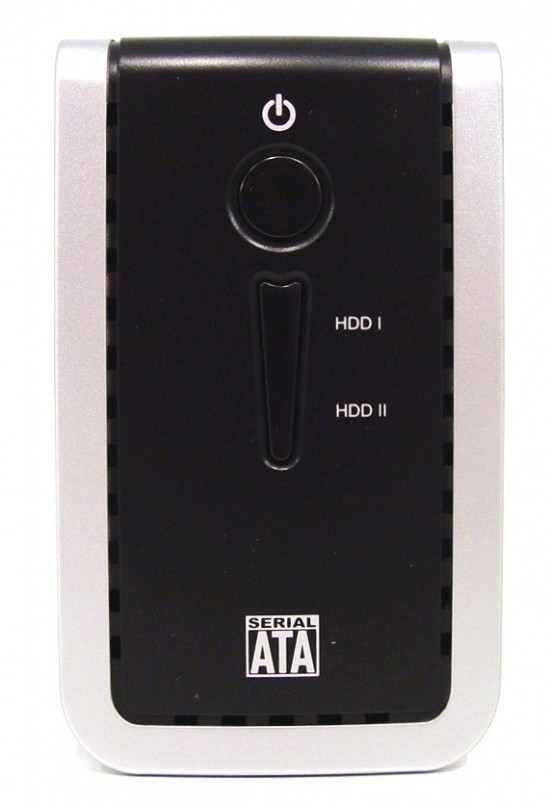 On the front we found a power button and a dual LED light system that shows disk activity. 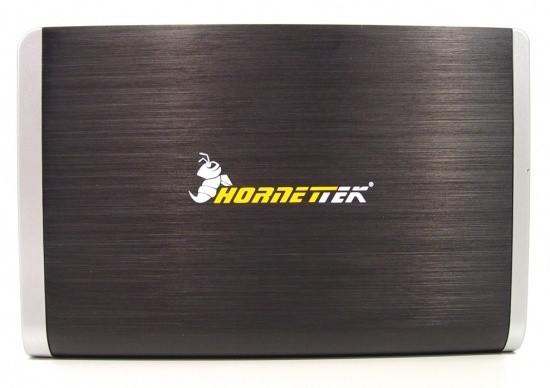 The sides are made from brushed aluminum. 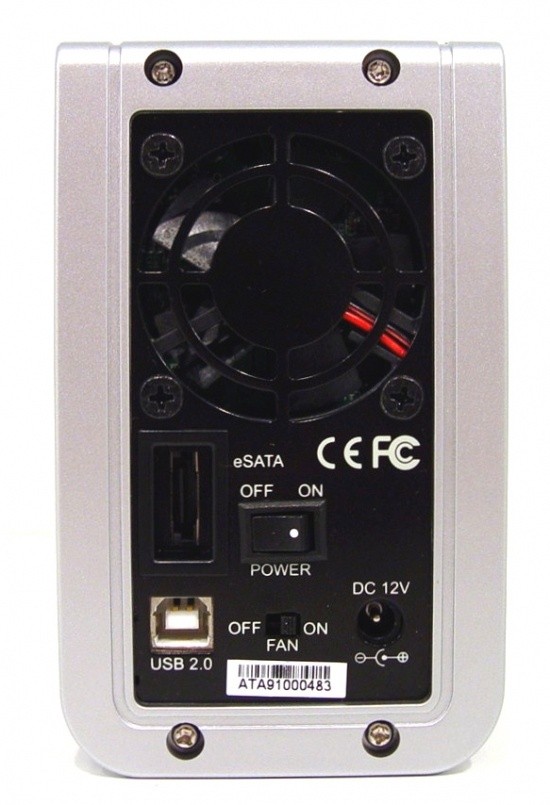 All of the action takes place at the back of the enclosure. Here we found the power switch, eSATA and USB connections as well as the plug for the power brick. 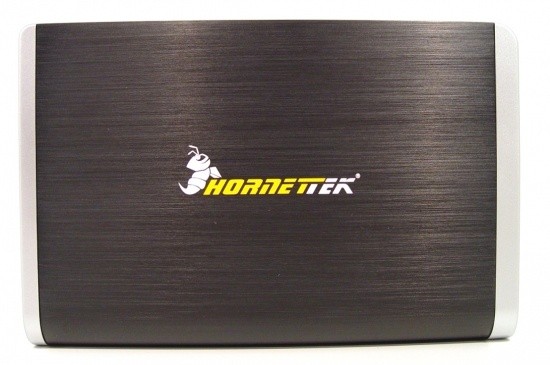 The other side is identical to the first side. 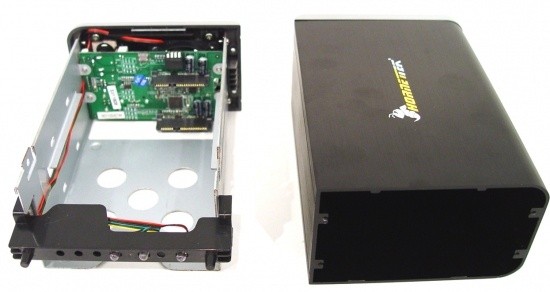 Here we see the two halves apart. The drives easily slide into place and the supplied screws hold them tight. 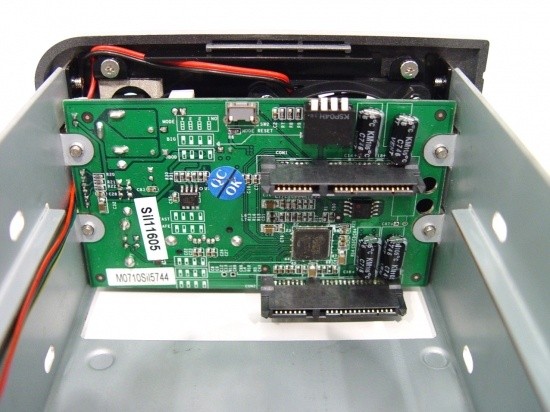 Along the top edge is where you will find four switches that allow you to set the RAID mode. For testing we used RAID 0 and RAID 1, but there are other RAID options available as well. 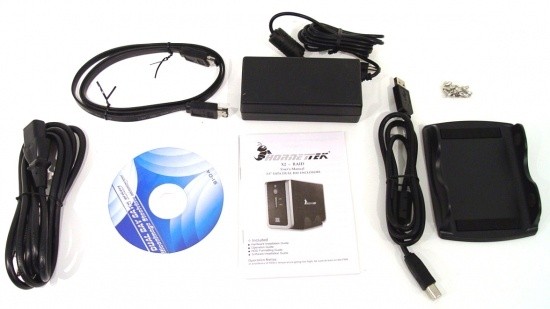 The HornetTek X2-RAID accessory package is shown here. The system comes with everything you need to get started as long as your motherboard already has an eSATA connector on the back. If not then you will need to purchase a bracket.

We tested the HornetTek X2-RAID in RAID 0 and RAID 1 with our trusty Seagate ES.2 1TB HDDs.

For comparison we are showing the test results of the HornetTek X2-RAID against two other DAS products that we have reviewed in the past. It should be noted that both the AXUS and Promise products hold four and five hard drives, while the X2-RAID only holds two. 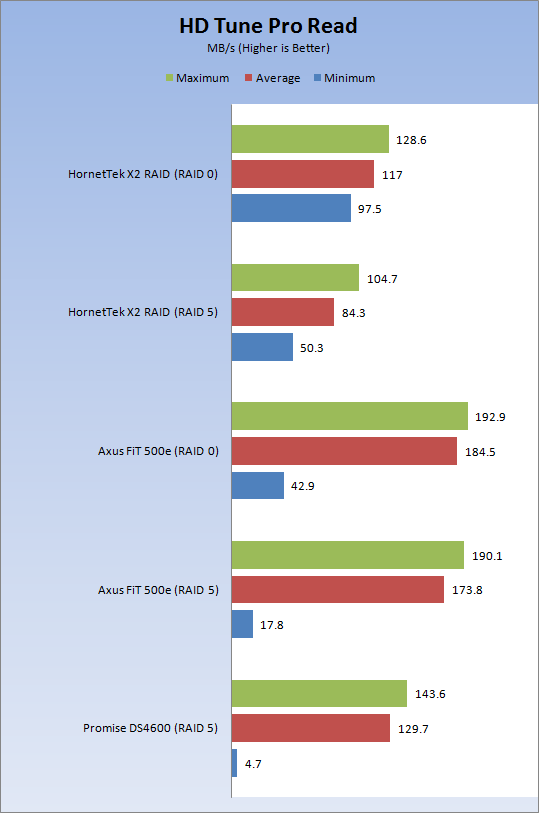 Even with just two drives, the HornetTek X2 performs very well in both RAID 0 and RAID 1. The RAID 1 numbers are nearly identical to what we would expect from a single drive attached to the motherboards native SATA II port. 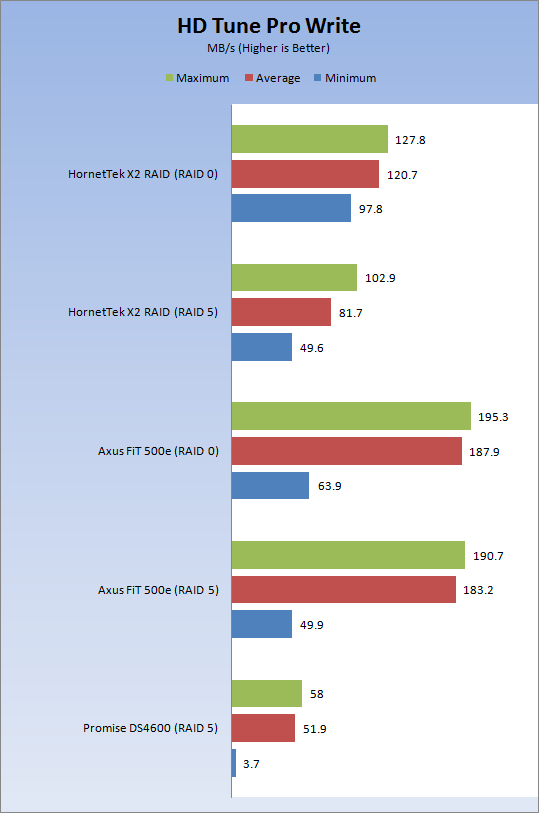 The write numbers are also respectable, but we would have liked to have seen the RAID 0 numbers a little higher at peak. 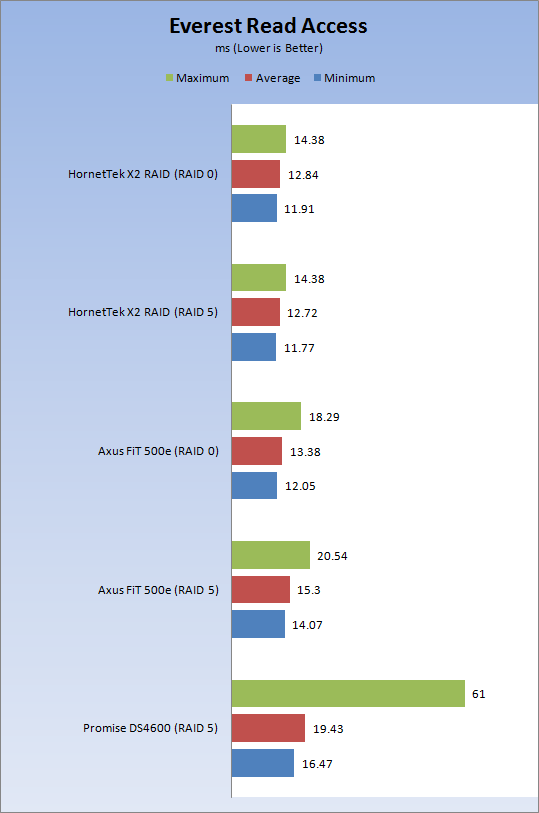 The read access times look very good and compare very well with the other enclosures. 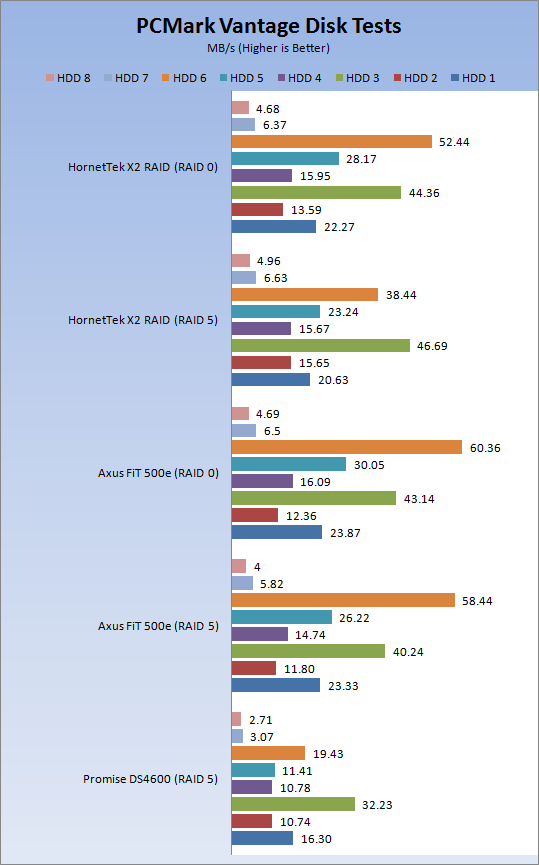 It is important to remember that no matter how many drives a DAS has, it still has to send the data through a single eSATA port that only runs at SATA 3Gbps speeds. Here we see the HornetTek X2-RAID keeping up with the larger enclosures and even outperform them in a few tests. 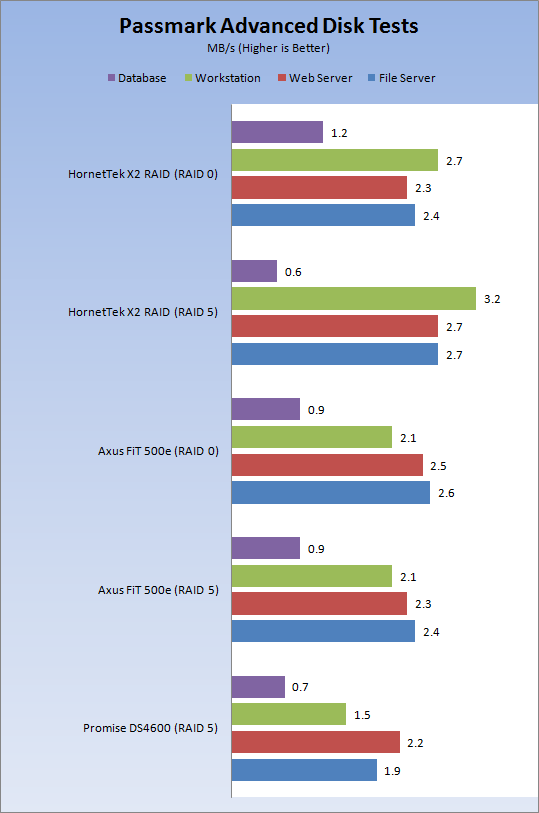 I don't expect many companies to run server level loads off the HornetTek X2-RAID, but some home users may run databases like QuickBook and such. Here we see X2-RAID once again keeping pace with the larger, more expensive enclosures.

HornetTek has a good track record of providing quality products that don't break the bank. The X2-RAID appears to be a slice of the same. When it comes to features, I have to admit that I didn't even know there were so many ways to RAID just two drives; this shows that the company is looking to take the extra steps needed to make products interesting.

We have yet to find the X2-RAID available in the wild, but when we were sent the unit we were told it would launch right after CES. The X2-JBOD is already available at MWAVE in the US, so I am sure the X2-RAID will soon follow. I am quite surprised to see the 40 Dollar price point HornetTek was able to put on the JBOD version and even if they are able to see the RAID version for twice the price of the JBOD, it will be a bargain.

The performance of the X2-RAID is quite impressive. It was a shock to see it performing at the same levels of the AXUS FiT 500 and Promise DS4600 even though both of those units use twice the amount of hard drives as the X2-RAID. Still, the pricing information will let us know the true value and as long as HornetTek is able to be competitive with other products on the market, they will have a winner with the X2-RAID.