Team Group made a solid name for themselves a couple of years ago when they started offering some of the fastest memory on the market at a price that made other memory makers red in the face. Since then Team has been a part of the enthusiast community worldwide and even expanded their product offerings to include among other things flash memory drives and even solid state drives.

Today we are testing the new Team Group Xtreem-G1 solid state drive. The G1 is based on the Indilinx Barefoot controller and has a rated read speed of 260MB/s and a write speed of 180MB/s. The Barefoot controller is capable of using up to 64MB of high speed DRAM cache and Team stuffed the drive to the max with very fast cache memory.

We have tested several Indilinx Barefoot controlled SSDs over the last year and despite what the specifications say, they do differ from one manufacturer to the other. The main differences between drives come down to the manufacturer of the NAND flash, the speed of the cache and the firmware loaded on the drive. Let's take a look and see what combination Team Group used on their new Xtreem-G1 drive and see how it compares in performance and price to several other SSDs we have tested in the past. 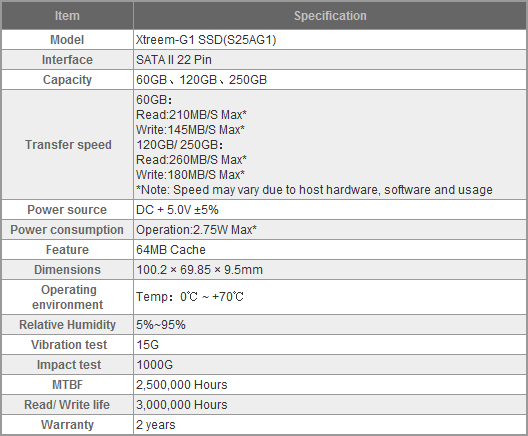 The Team Group Xtreem-G1 uses the IDX110M00-LC controller and 166 MHz Elpida cache modules that we have come to know quite well. A glance at the specifications and later the pricing, I thought Team might have used the IDX110M01 "ECO" controller that we found on the G.Skill Falcon II, but that was not the case after opening the drive up.

Like all solid state drives, the G1 offers superior shock protection when compared to traditional platter based drives and the access times, being either random or sequential are much lower. Other benefits of SSDs include cooler operating temperatures in most cases and also lower power consumption.

Team is offering the Xtreem-G1 in 60, 120 and 250GB capacities. I was not able to locate any G1 products in the US or UK just yet, but did find that South Africa has several in at least two online shops. Instead of trying to convert the price over to USD, we just compared the cost of the Team Xtreem-G1 to other Indilinx Barefoot controlled drives of the same capacity and from the same reseller. While researching I found that the Team Group Xtreem-G1 60 and 120GB capacity drives were priced lower than other drives using the same controller. 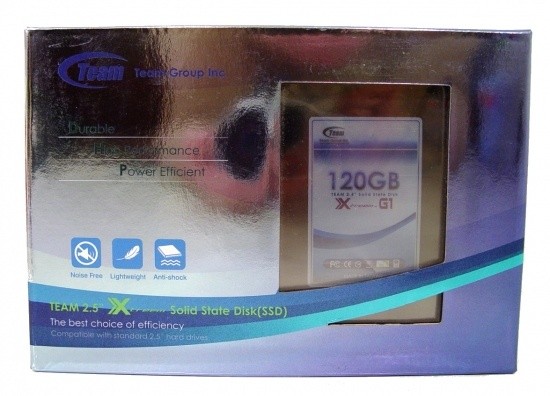 Team uses a highly reflective package that makes taking photos of it difficult. After a little work we were able to make it so the text would show in the picture. Here we see that Team lists some of the benefits of solid state technology, but not a lot of information about the drive itself. 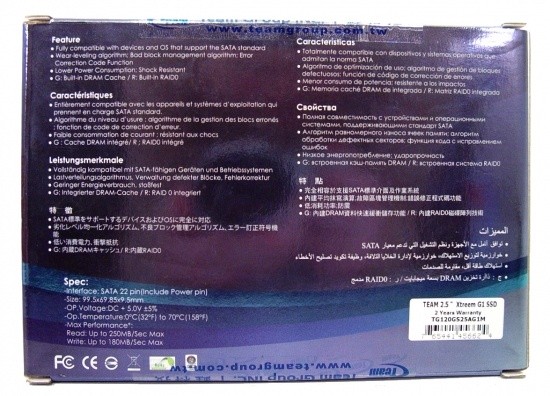 On the back we found an interesting item in the Features at the top left. When Team Group announced their new G1 they also announced an R1 model that retains the 2.5 inch form factor but has two SSDs running in RAID 0 like the PhotoFast V5 we tested several months before. Little has been said about the R1 since the press release went out, but hopefully we see it in the test lab soon.

Also on the back we found specific information about the G1 like the 2 year warranty and speed numbers. 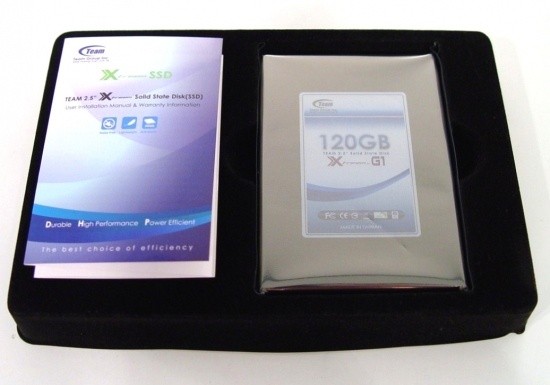 The packaging was well thought out and we didn't have any major obstacles to get around before getting to the drive. I skimmed over the manual and found that it would be helpful if you have never removed a drive before. 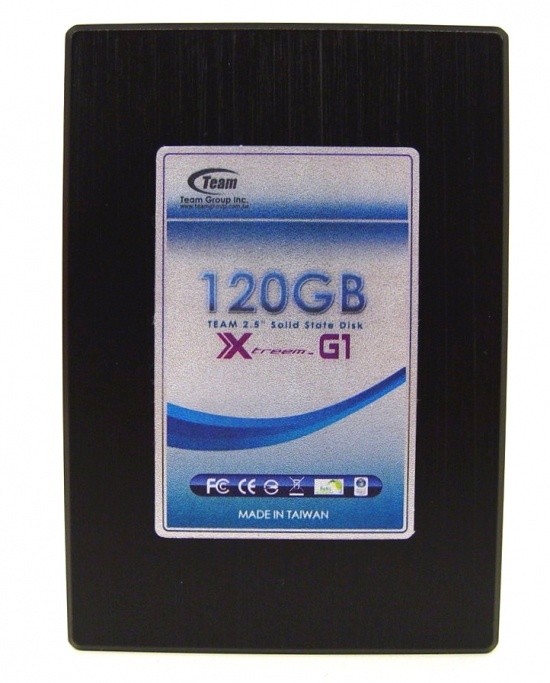 The same shiny finish that we found on the box was also on the label of the drive. On the front we can clearly see the capacity and model number. 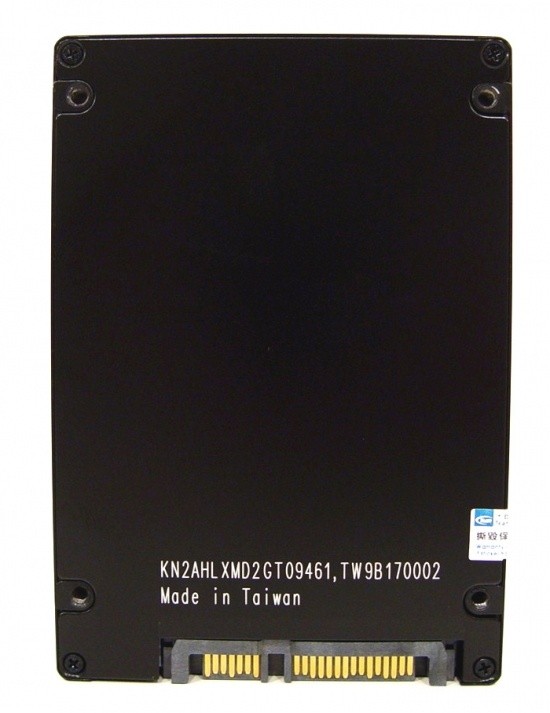 The back of the drive has the specific model and serial number for the drive you just purchased.

On the side we found all of the mounting locations were where they should be, so you will not have a problem mounting this drive in your notebook or desktop with the correct adapter.

The power and data cables are where they should be. We took this image upside down so you could also see the two pins sticking out on the left side. Most companies don't bother putting these on any longer since they are not needed to flash the firmware any more. 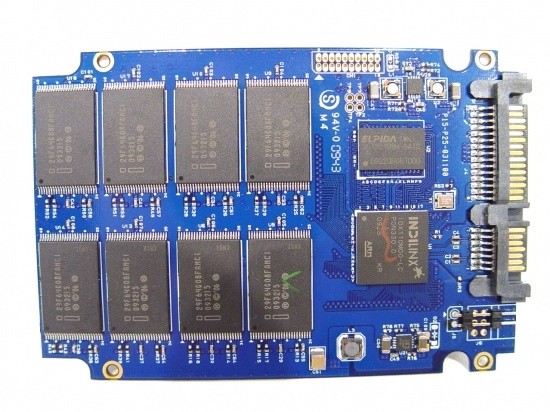 We just can't help ourselves sometimes. Here we see the actual PCB removed from the case. The Indilinx controller and Elpida cache module are on the right side and our sample drive came with Intel 29F64C08FAMCI flash modules. 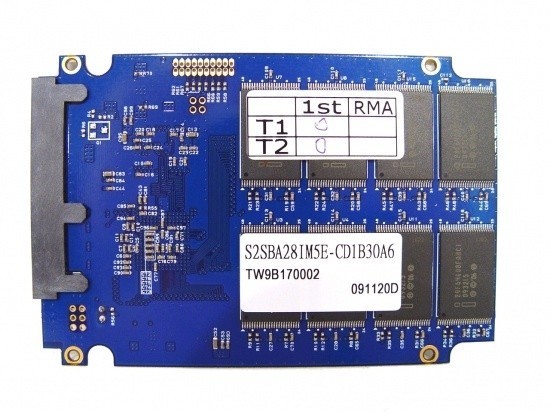 There is not much to see on the back of the PCB.

Our test group is mostly made up of Indilinx Barefoot drives, the Patriot Warp M28 being the only exception. The PhotoFast V5 is a special RAID 0 edition that costs 3x more than the others in the group so it isn't an exact fit, but it is always nice to get some variety. 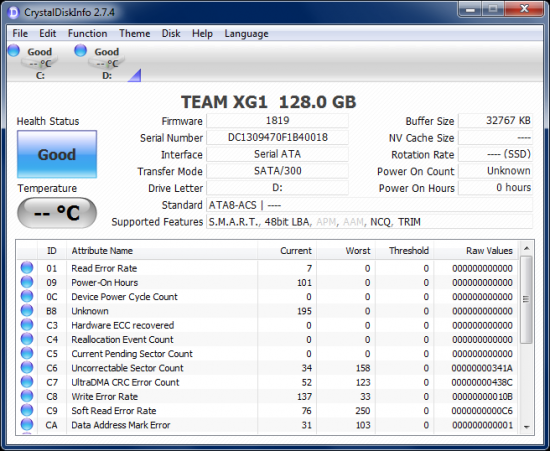 The sample sent from Team Group had the 1819 firmware installed. This is what most drives shipping today has on them out of the box. A few companies are starting to release the latest 1916 firmware. I looked on Team's website to see if they had any other firmware versions available for download, but none were listed. 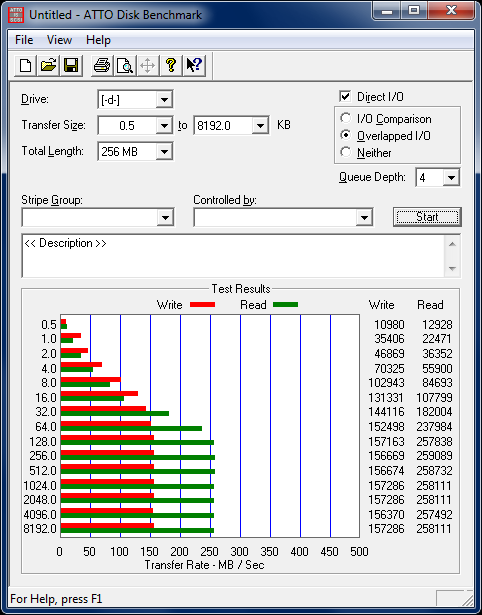 The raw performance of the drive in ATTO shows a strong read speed of close to 260 MB/s, but the write speed is lower than what we have seen on some other Barefoot controlled drives, but this is normal with the 1819 firmware. The 1881 firmware did free up around 40MB/s of extra write speed.

Let's see how that affects the benchmark results. 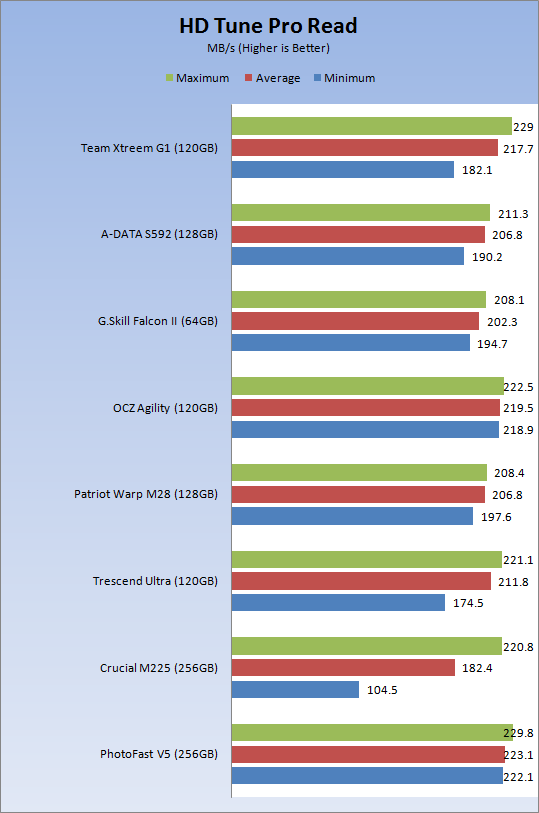 When it comes to straight across the drive read speed, we see that the Team Group Xtreem-G1 holds itself very well with the group. 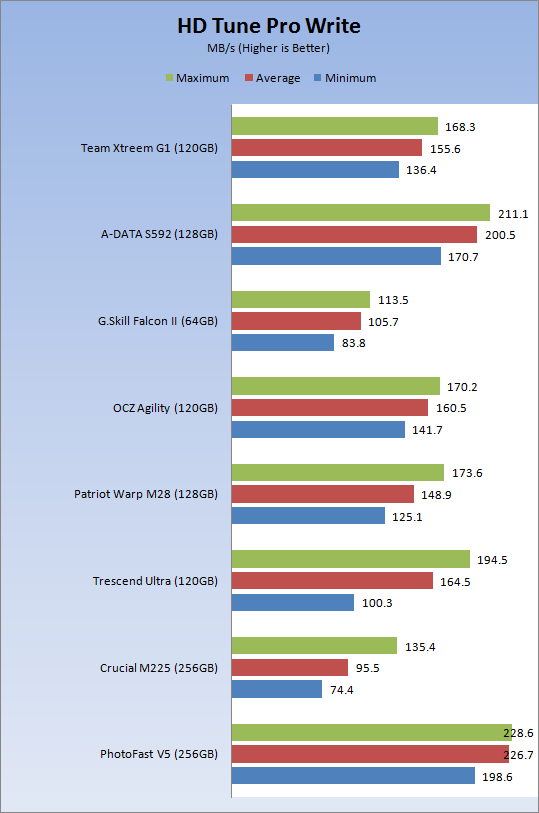 The write speeds are down due to the firmware; here we see the 1881 firmware loaded on the A-DATA S592. When comparing drives with identical firmware, we see that the Team Xtreem-G1 rests right in the middle of the other drives. 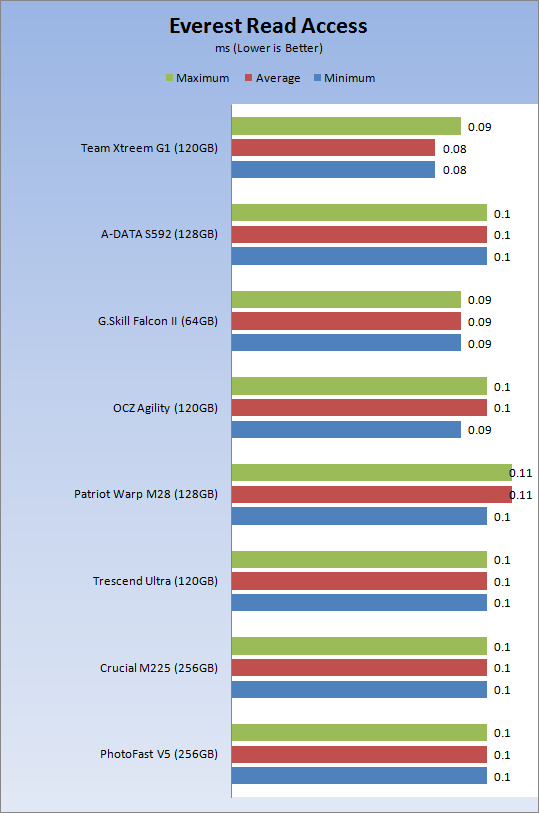 The read access times are some of the lowest we have come across with the Indilinx controlled drives. This is one of the areas that make solid state drives so much nicer than their platter based counterparts. Typical 7,200 RPM platter drives scores around 12-15.00 ms access time in this test. 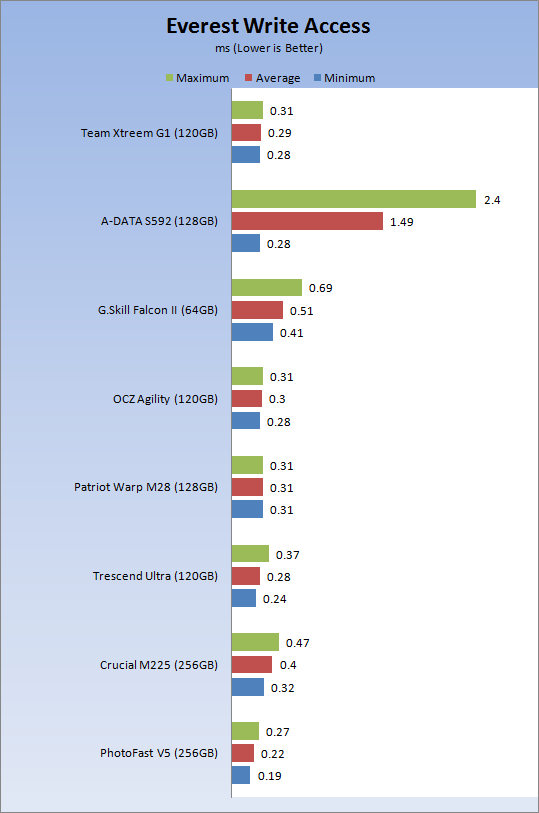 The write access times are spot on for where they should be with the G1's firmware.

The real world Windows tests show strong performance for the G1 in all of the tests. Solid state drives are able to perform very well in Windows 7 and here we see just how fast they really are. 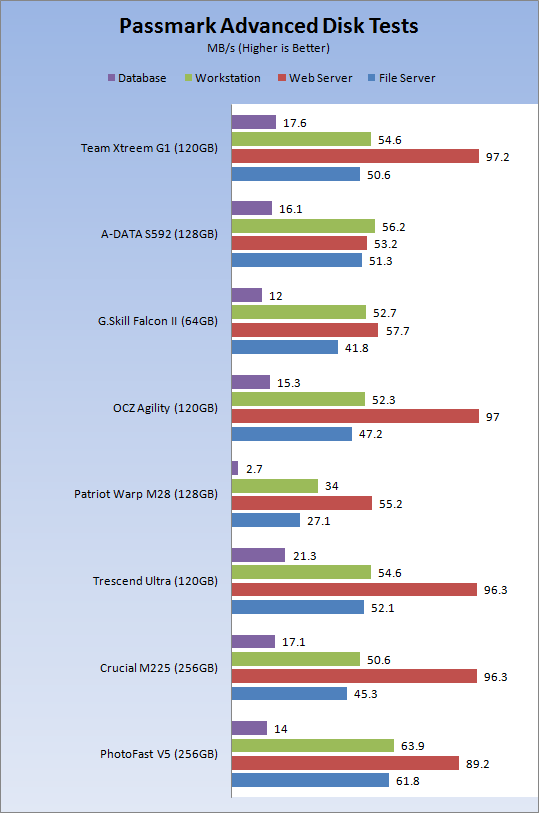 Our server and workstation tests also show that the Team Group Xreem G1 performs well in this area. The 1819 firmware has always showed very strong performance in the Web Server category and here we see the G1 outperforming all of the other drives.

We have tested a lot of drives with the Indilinx Barefoot controller and are impressed every time a new one comes in. When it comes to getting the best ratio of performance, value and capacity, you really can't go wrong with this controller.

The one area that really stood out for me was the price of the G1 compared to other drives listed for sale at the same e-tailer. The Team Group Xreem G1 clearly cost less and in some cases by a large margin. This leads us to the next portion; where the hell can you buy them in North America or Europe? Newegg does list a few of Team Group's products, but the number has been dwindling down. Currently there are only a handful of thumb drives. We would really like to see Team get their products out to more resellers worldwide in the future.

When it comes to performance, the Team G1 is able to hang with the pack of other similarly configured drives from other manufacturers. Team also offers a nice 2 year warranty at a time when many manufacturers are starting to lower their warranty terms to just one year.