I hate to say it, but it really felt for a while that Corsair had kind of stepped back a bit from the lime light and a lot of other companies had come in to bring overclockers the RAM they want. I'm not sure if this actually happened, or if it's simply just my perception; otherwise it could just be the fact that Corsair have been breaking speed barriers left and right.

Towards the end of December we saw PC3-17600 show its face. What you had was 2200MHz DDR modules with some pretty relaxed timings. Then in waltzes Corsair, strutting their stuff with a PC3-18000 kit that carried with it a default clock of 2250MHz DDR and some impressive timings to boot. If that wasn't enough, the fact that we then got another 100MHz+ DDR out of the kit with the same timings was just awesome.

Another week goes by and we find ourselves looking at a kit that might be carrying some slightly more relaxed timings, but a massive stock clock. PC3-19200 is the number you need to know today. Let's jump forward a page and find out what that huge number translates to.

There's nothing to the package of the Corsair Dominator GTX kit we have here today. While we don't mean nothing in the literal sense, we do mean it in a way that apart from an anti-static bag, some padding and a little white box, there's nothing to see. So with that said, let's check out the modules and see what exactly we have going on here.

In the looks department it's nothing you haven't seen from the Dominator series for months now, let alone the Dominator GTX kit we looked at just last week. You've got a black and red heatsink that feels of excellent quality and gives you the standard run down of information. 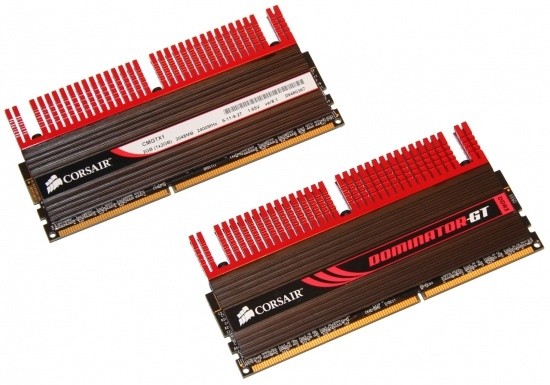 On one side we have the Corsair and Dominator logo, while the other side gives us the Corsair logo again along with all the main specifications and the model number. 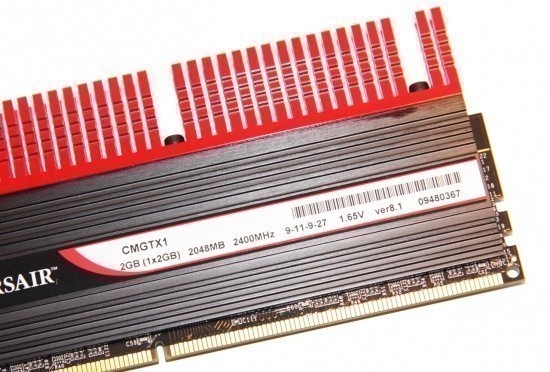 In this case the main piece of information we're looking at is 2400MHz. When you consider the i5 series of CPUs from Intel starting at 2660MHz, this is a pretty astonishing number that is presented on these memory sticks. You can clearly see the timings along with a bit of other information. We'll go into more detail of what's going on in the next page.

Two weeks ago my ASRock P55 Deluxe hadn't seen a memory speed exceed 2250MHz DDR. With nothing but some fancy new memory modules and confidence in my testbed, we saw that climb to just over 2350MHz DDR. Not knowing if there was anything left in the tank, it was time to see if the board could achieve 2400MHz.

To say it did it with ease wouldn't be an exaggeration. The memory went in, the BCLK went up, the divider was adjusted, the voltage was set and the timings were set. A reboot out of the bios was done and within a minute we were in Windows. I'm not sure if I was surprised that the memory was able to achieve the speed it was supposed to, or the fact that the ASRock P55 Deluxe worked at the speed, but either way it was a win in my books. 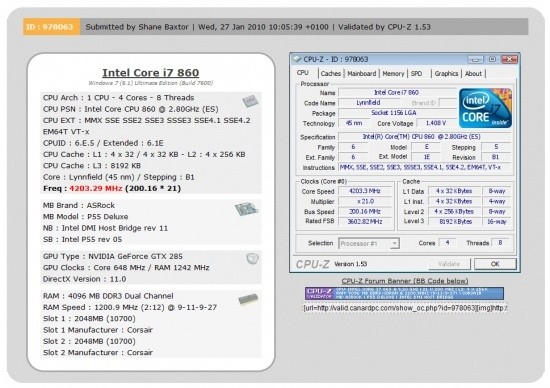 With getting into Windows out of the way, it was time to prime the machine for a bit to double check everything was stable and the great news was that we didn't run into a single problem.

With very little hope for extra MHz from the kit, I did take the time to do a bit of overclocking. We booted at 2500MHz DDR, got into Windows at 2450MHz DDR and were able to launch Prime and run it for about 90 seconds at 2425MHz DDR.

With more voltage and adjusting the timings, we may have been able to get something more stable above 2400MHz DDR, but since we always leave the timings at default and don't move over that 1.65v memory voltage for any kit, we left it as was. Considering out of the box you're already getting 2400MHz DDR, it was simply impossible to feel disappointed in any such way with the kit.


Since we couldn't really get over 2400MHz DDR, we have only benched the kit at its default setup today. For comparisons sake we've put it against the lower latency 2250MHz DDR kit from Corsair and also see how it goes against two of the 2200MHz DDR kits we've looked at previously.

Important Note: When modules are overclocked we adjust the BCLK which not only lets us fine tune the MHz out of a module, but in turn increases the overall CPU clock speed. While we always make the effort to include the BCLK and CPU Speed in our graphs, please just make sure that you make note of these when looking at the results. In some tests that don't purely test the memory speed, the extra MHz on offer from the CPU can increase the result. Of course it's worth noting that having faster memory gives you the ability to run your CPU at a higher speed. 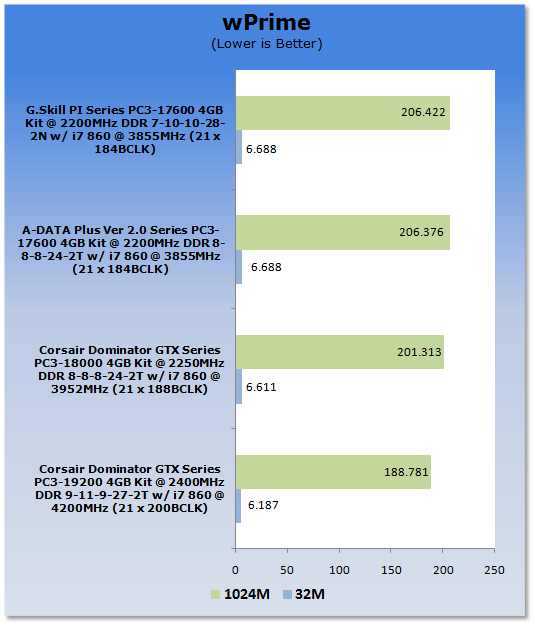 The massive MHz on offer means we've got a whole lot of breathing room when it comes to our CPU speed. Well above the 4GHz clock helps put the Corsair PC3-19200 kit well in the lead here. 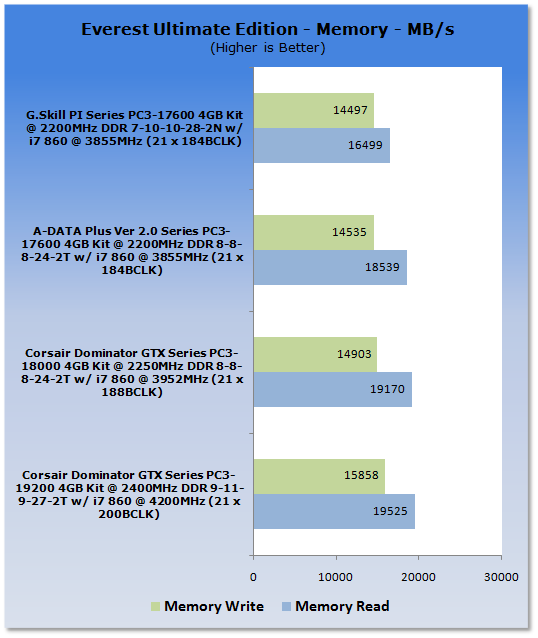 Even though the timings are more relaxed than the 2250MHz DDR Dominator GTX, we can clearly see there's more bandwidth on offer thanks to the extra 150MHz DDR given to us by the PC3-19200 kit. 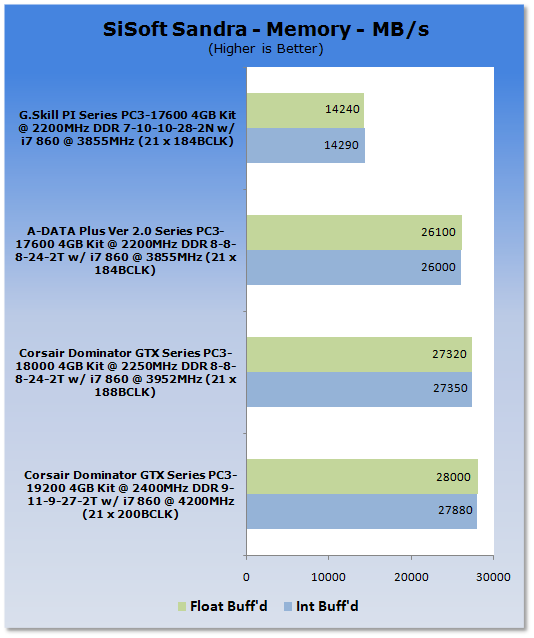 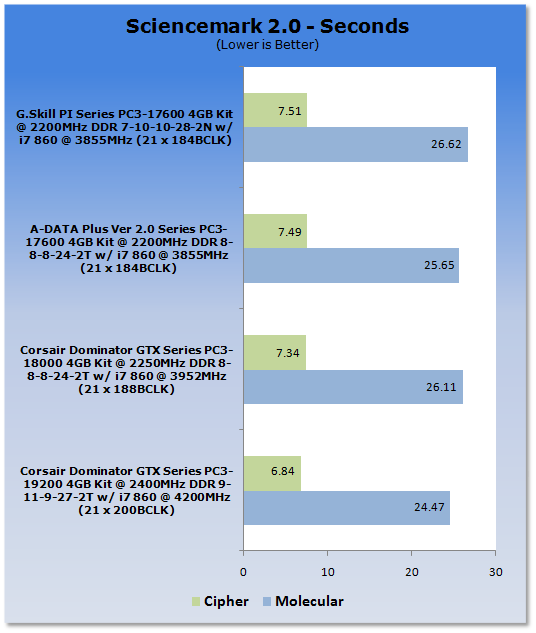 With 2400MHz DDR on offer, we've let the CPU really stretch its legs. That extra 250MHz from the closest kit here means performance under Sciencemark is extremely strong in both the Cipher and Molecular test. 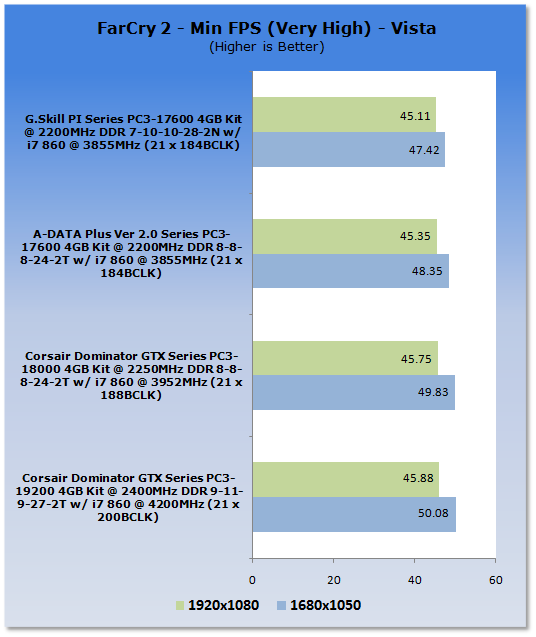 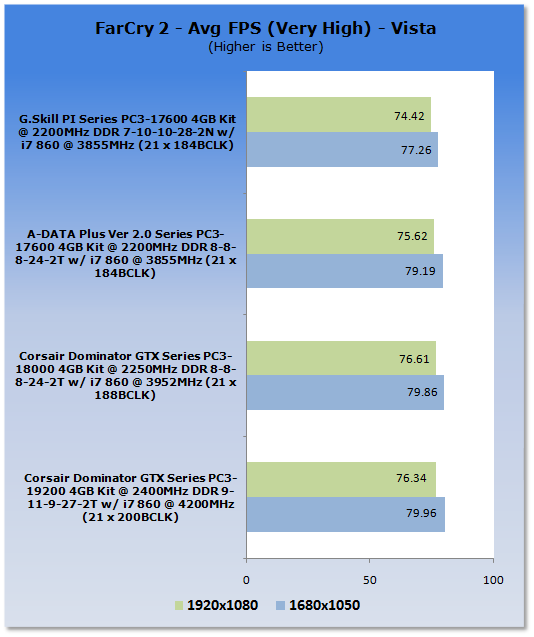 We can see a slight boost in gaming performance here; this memory kit would really shine with a HD 5970 which is able to make use of that extra CPU MHz on offer.

Corsair isn't the only kit to have listed on their website memory that comes in at 2400MHz DDR. The difference, however, is that the Corsair kit is here, in our hands and proving to us that it's ready to rock and roll.

As always, a decision will have to be made. Like the 2250MHz DDR kit, this memory is bought by the piece. Unlike the GTX2 2250MHz DDR modules, though, this is a kit designed for the P55 platform instead of the P55 and X58. If high performance memory is what you're after and you're on an X58 machine, then the GTX2 kit is what you're going to want.

On the other hand, if you're running a P55 you have to decide if you want slightly lower clock speeds with more aggressive timings or higher clock speeds with more relaxed timings. If it was me personally, I would opt for the GTX2 kit, but that's only because I was able to achieve 2350MHz DDR on that kit. Since we can't guarantee you would have the same luck, if raw MHz is what you're after then the GTX1 kit we're looking at today is going to be a better option.

Throw in the fact that if you really take the time to work with the timings and voltages and move slightly away from the 9-11-9-27 setup, you might be able to achieve even more MHz. What this is going to offer you is more raw power thanks to the speed you're getting. Throw in the fact that your CPU could be running hundreds of MHz faster, it's an open and shut case for many.

If you're all about the MHz, this is going to be the kit to get. You're going to give your whole system more breathing room and really give it a chance to stand out. In saying that, it's crazy to think that the GTX2 kit and it' more aggressive timings at 2250MHz DDR won't do the same.

Like the GTX2 kit, it's recommended that you fork out the extra few dollars to buy some active cooling for the modules. While not necessary, it's highly recommended and while not pictured in this review, the Corsair Airflow from the previous kit we looked at was used.

To be honest, I'm ecstatic that all I have to do is tell you if this kit of RAM kicks ass and not to make the decision on what kit you should buy. For the record, however, this RAM does kick some serious ass!