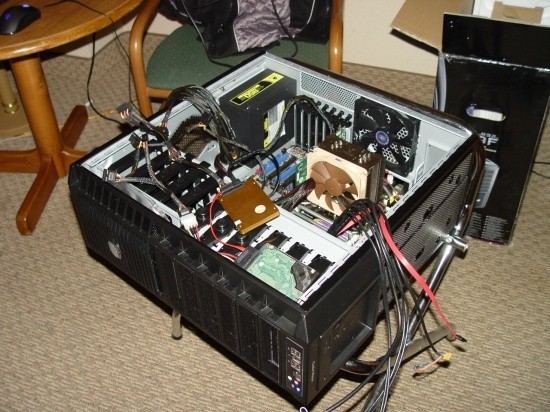 We have talked a lot about upcoming next generation solid state drives, but now it is time to quit talking and start benching. While everyone else is out running around looking for their next big news story, I have been tucked in my hotel room as if it was a satellite office. So here I am; shorts, sandals, T-shirt and the new RunCore Pro V (Five).

The RunCore Pro V is the company's upcoming enthusiast class solid state drive that pairs a SandForce 1500 enterprise controller with consumer MLC flash memory. If you are a frequent reader here at TweakTown, you already know that multi-level cell (MLC) flash costs less than single-level cell (SLC) flash. Most consumer SSDs use MLC flash since this allows manufacturers to reduce the cost of their SSDs.

SandForce is taking a two tier approach with their controllers. To be honest, we still do not have a lot of information about the SandForce 1200 and 1500 or what makes them different. We do know that the SandForce 1200 is designed for the consumer market and uses MLC flash. The SandForce 1500 is an enterprise controller that is capable of using SLC or MLC flash. So far we have only heard of two companies looking to match the SF 1500 with MLC memory.

As you can imagine this early in the game, we don't have retail product box images or exact pricing information. What we do know is that RunCore's Pro V is going to cost more than current Indilinx Barefoot based Pro IV drives, but we should not see the price double.

Today's preview is going to be down and dirty just like we like our women and Martinis. As you can see from the image above, we were not in our normal test location, but the workstation has been flown to Las Vegas just for this test.

As we alluded to in the intro, we don't have a lot of information on the SandForce 1500, but should have the full rundown in the next 24 hours. Because of this we needed to dig and see what info we could pull from the two drives we have on hand, serial numbers 5 and 10.

So far we have learned that the RunCore Pro V will be available in 50, 100 and 200GB capacities. For connectivity the Pro V is SATA 3G only. There has been a lot of talk about Marvell and Indilinx's new SATA 6G controllers, but we are starting to hear excuses as to why we were not delivered the product today. As it sits right now, SandForce will have the only next generation solid state controller available for the first few months of 2010.

When it comes to pricing and availability, we can only pass along what we have been told. Look to purchase retail drives in February at the earliest. By March the supply should be plentiful, high speed SSDs for all with the bank to indulge your inner go fast needs.

The RunCore Pro IV used a black case but the Pro V comes in nice brushed aluminum gold. Other than the color, both cases look nearly identical and are of very high quality. 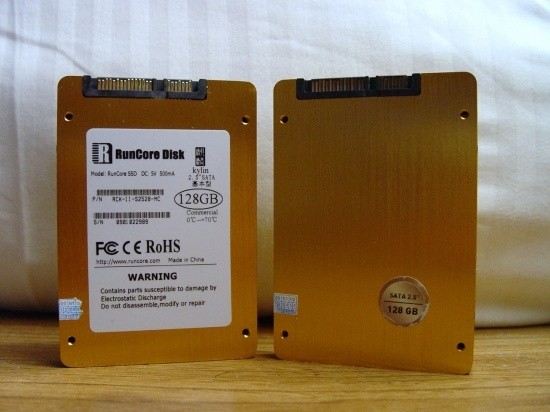 A little has changed from serial number 5 to SN 10. Here we see the back of the drives and the newer unit has a full label. 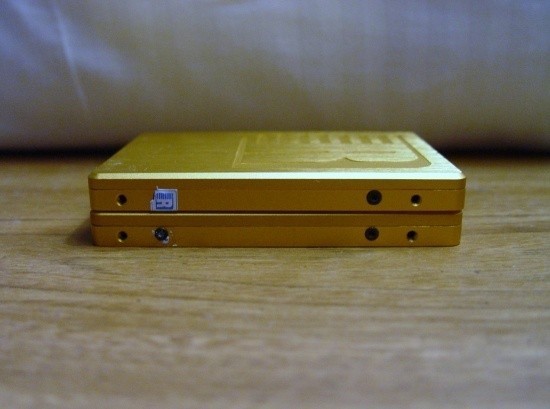 We were really hoping to disassemble the drives, but found that you need a Torx Key to do so. When I return home the first thing I will do is pop the top and see how the Pro V is laid out. Here we also see the side mounting locations that make for easy installation in your notebook or desktop adapter. 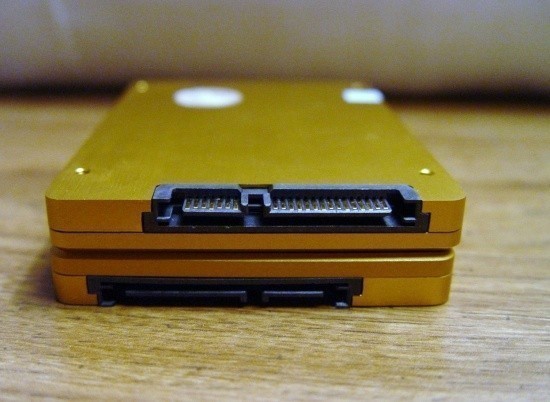 The SATA power and data ports are located where they need to be, so everything is good there.

It is important to remember that the RunCore Pro V that we are testing today is on beta firmware. We have it from good authority that at least one firmware revision will hit before the product is launched. At this time we are confident that we are playing with final hardware. Since I am taking these two drives home, we will be able to retest when the final retail firmware is ready. 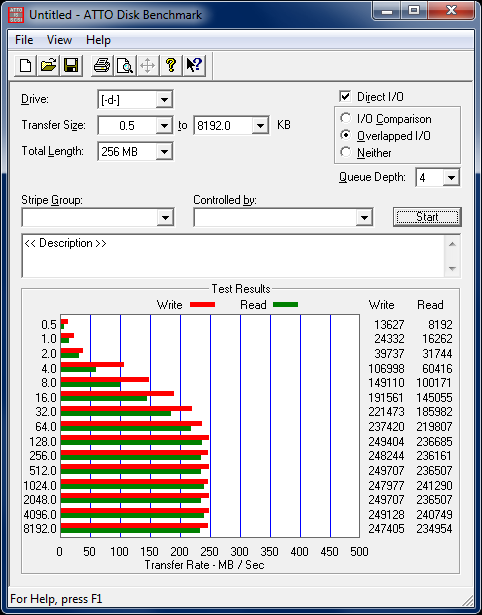 The ATTO benchmark shows that the RunCore Pro V is pretty much limited by the SATA II interface. What this is eventually going to lead to with enthusiasts is finding ways to overclock the SATA II bus to try and squeeze even more performance out of the drive. 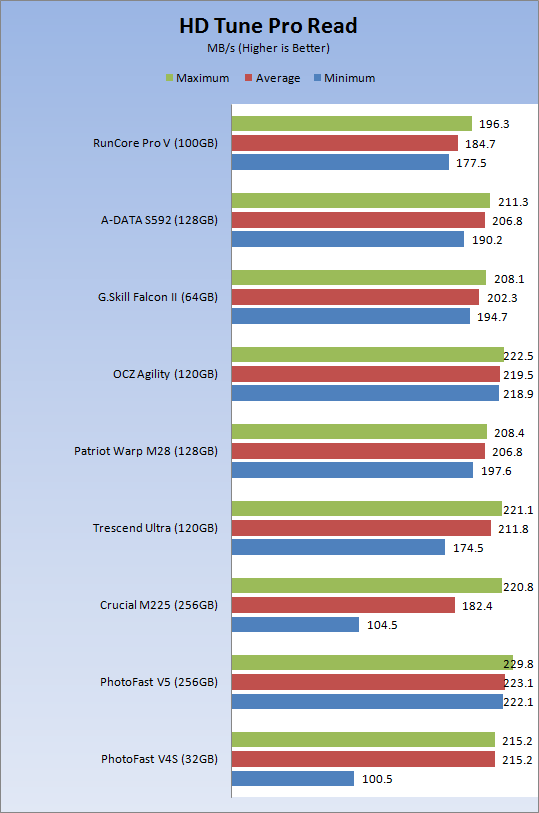 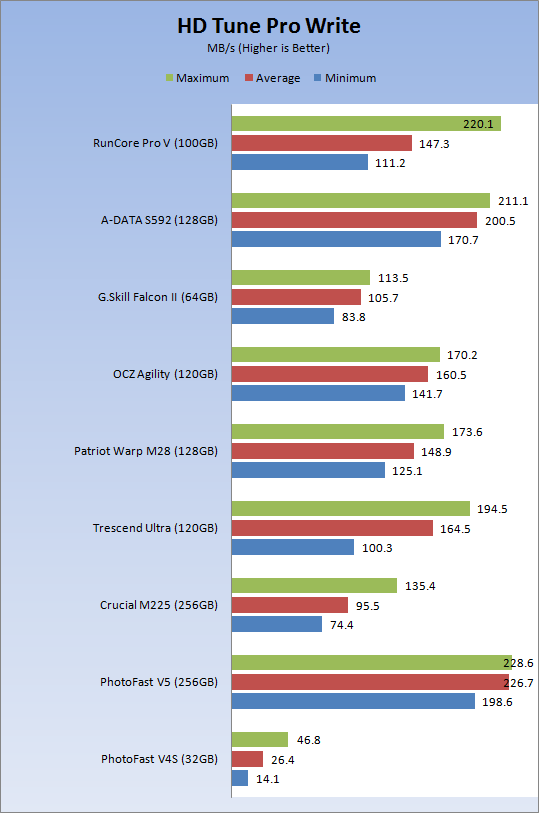 The write sustained numbers are a lot like the early firmware we tested on the Indilinx Barefoot controller around a year ago. As of now the Pro V has several peaks on the benchmark graph, but the low end is pretty steady. We should see these even out as the firmware progresses. 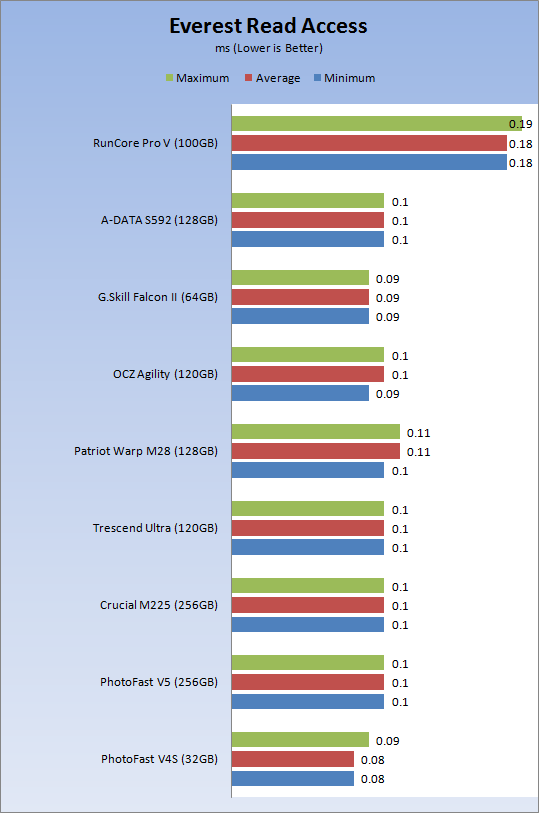 At the time of testing we observed the read access times that double that of the Barefoot drives. The Pro V is still a lot faster than traditional platter based drives and I am sure that newer firmware will lower the access times. 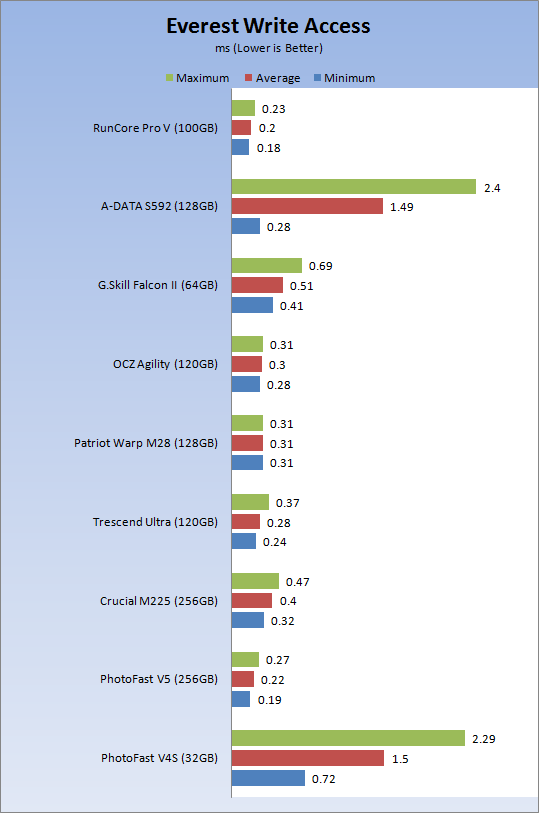 Write access times were much better than the read times.

The real world Windows Tests show the RunCore Pro V blowing everything on the chart out of the water. For Windows users these tests give us an accurate indication of how the drive will perform as a boot disk and I have to say that the boot is what the Barefoot drives just got for enthusiasts. 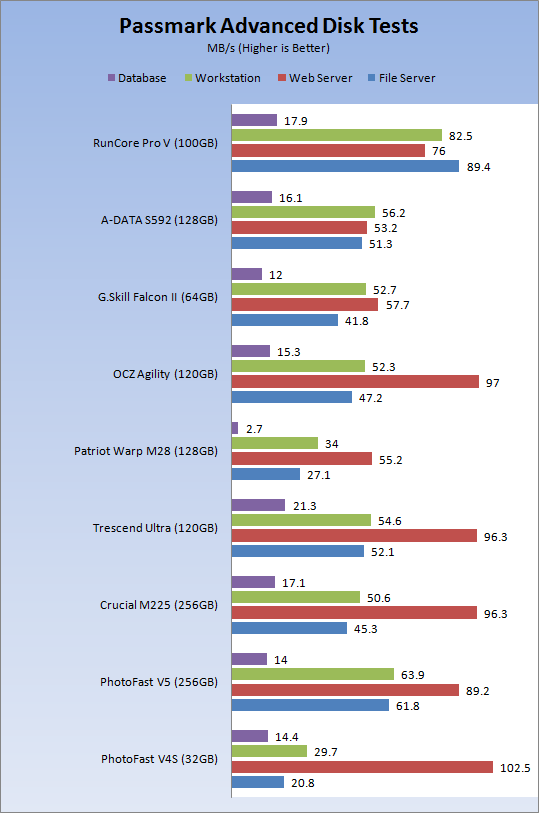 The server tests show solid numbers that collectively outperform the Barefoot drives. As you can see, different firmware revisions to the Barefoot have shifted performance levels in our tests, but even with modified firmware the RunCore Pro V gives us better performance in nearly all tests, even with the early firmware. 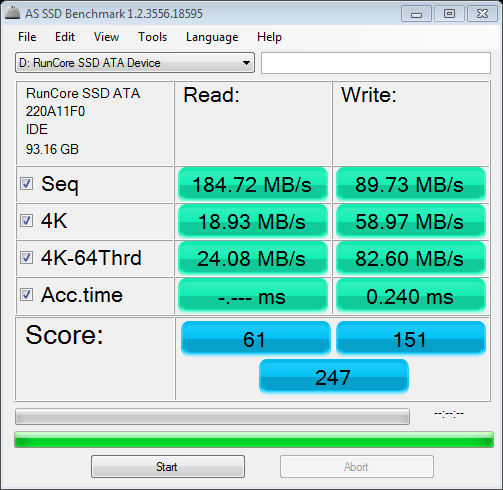 We are starting to really get to love the AS SSD Benchmark. Here we want to point out the 4K read and write numbers. With the early firmware we see the 4K read numbers running much lower than the write 4K. The write 4K numbers are the highest we have ever seen in testing...ever.

The 4K numbers are important to us because so many of the files we read and write are of this variety.

Even though we are working with very early samples, it is safe to proclaim the RunCore Pro V with the SandForce 1500 controller and low cost MLC flash a very fast solid state drive. At this time I feel comfortable saying that the Pro V will be the enthusiast SSD in which all others will be compared to for the first half of 2010. The synthetic numbers don't show the true potential of the Pro V, but as soon as we get to real world Windows operations the synthetics be damned, this is the real deal.

What we really need to know before passing the final judgment is cost. We already know that the Pro V will cost more than the Barefoot powered Pro IV, but is it going to be a 10, 20 or 30% increase in cost? Another thing we need to consider is how the drive will compare to next generation products based on SandForce 1200, Marvel and Indilinx. The SandForce 1200 products should show up around the March timeframe and the latter two should arrive early Q2 if we are lucky.

What we do know is the RunCore Pro V is fast, fast enough to satisfy our needs and limited in many cases by other hardware like SATA II and even processor speed. The 4K performance is the highest we have ever tested to date; it is simply amazing. Every enthusiast on the planet will want this drive!

As you might have noticed, we have a matched pair of 100GB drives. Tune in tomorrow for our RAID 0 benchmarks!