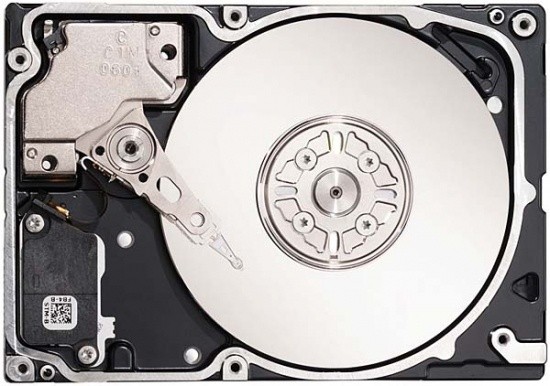 
It has been quite a busy month with next generation SATA and SAS 6Gb/s hitting the market. A couple of months ago we received out first SAS 2.0 hard drives from Seagate and tested them on first generation hardware, but we noticed that the two fastest drives that arrived, the Cheetah 15K.7 and Savvio 15K.2 were limited by the first generation SAS controller we had on hand to test with. A couple of weeks ago LSI and Intel both announced their first SAS 2.0 6 Gb/s storage controllers and we were able to finally get the most out of the Seagate second generation SAS drives.

So far we have reviewed the Seagate Cheetah 15K.7 and the Savvio 15K.2 and found that the performance of both drives far exceeds anything we have in the consumer market outside of solid state drives. Their 15,000 RPM platters make access times lower and now we are about to test the 10,000 RPM enterprise Savvio from Seagate, the 10K.3.

Seagate's Savvio Series products use the 2.5-inch wide, 12.5mm tall form factor that is quickly becoming the standard for enterprise servers. This new 2.5-inch form factor allows for more drives to be used in the same amount of space than traditional 3.5-inch drives. In a 1U, 1.75 inch rack mount server you can fit four 3.5-inch drives, but in that same space eight 2.5-inch drives. In the enterprise market the number of drives outshines the capacity; more drives will equal more transfer speed and higher RAID array reliability when used with more advanced RAID levels.

Let's have a look and see the specifications of this third generation 10,000 RPM Savvio from Seagate. 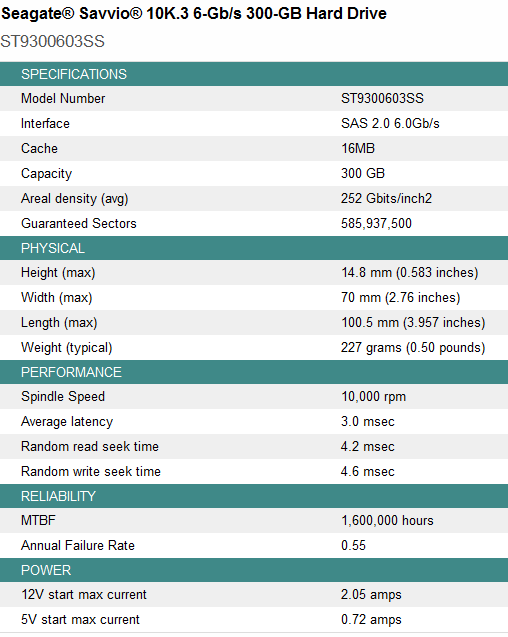 Seagate's Savvio 10K.3 is available in 146 and 300GB capacities. Both versions of the drive use the latest, just released SAS 2.0 interface that has a maximum point to point rating of 6 Gb/s. These Savvio drives use 10,000 RPM platter speeds, a standard Seagate first launched in 1996 when the first 10,000 RPM Cheetah was released. Since then Seagate has continued to revise and update their strategy which has lead to the low cost Savvio Series that was introduced in 2004. The current third generation Savvio 10K drives use 16MB of cache.

After a quick search I found that Newegg is currently out of stock of the 10K.3 series drives. Google Shopping did pull up several e-tailers with the 146GB costing 177.00 USD and the 300GB for 225.00 Dollars. This is right around where we see the Western Digital VelociRaptor priced and it will be interesting to see how the two compare in our real world tests coming later in this review. 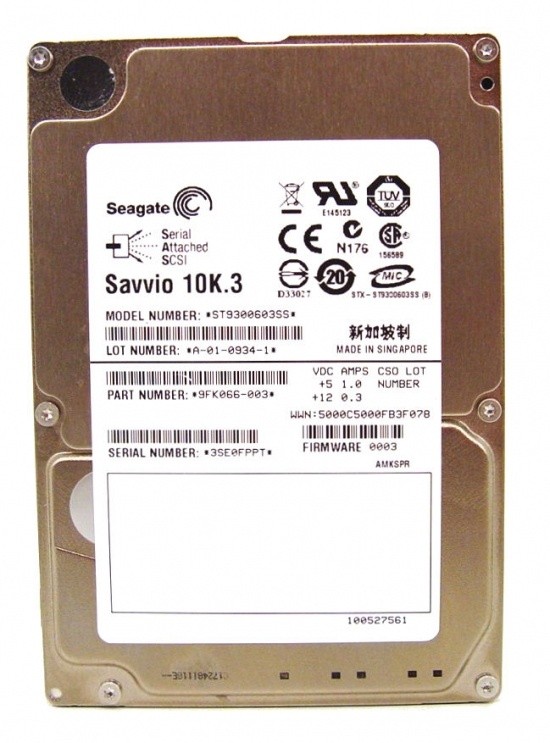 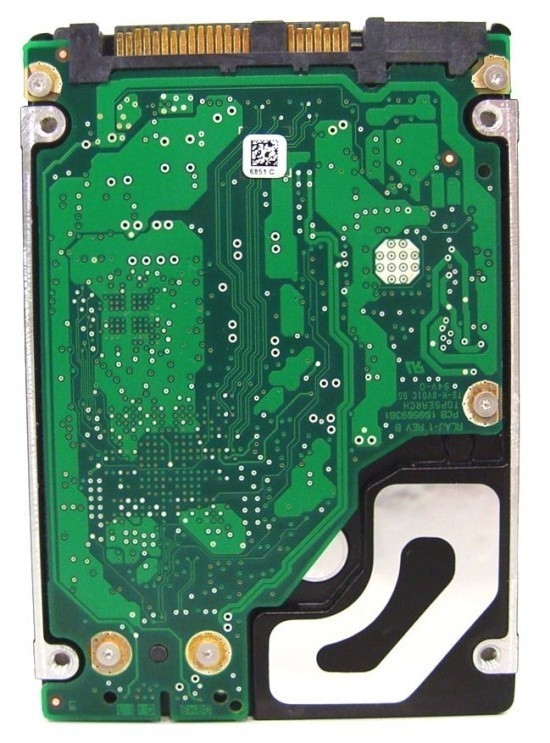 A couple of years ago Seagate started mounting all of the components on the other side of the board, so there isn't much to see here.

The sides of the drive have the mounting points in the traditional locations. Here we see a notebook 2.5 inch drive compared to the 10K.3, a 12.5mm drive. 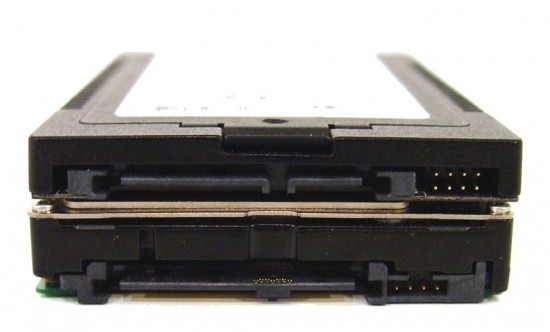 The back side of the drive has all of the standard SAS power and data connectors where they should be. On top is a notebook drive with a SATA interface for reference and to see the difference between the two.

Today we are testing the Seagate Savvio 10K.3 against other Seagate SAS drives and a Western Digital VelociRaptor, another 10,000 RPM hard drive. The Raptor is designed for the consumer market and uses SATA instead of SAS, but Western Digital has incorporated it into their enterprise series of products. 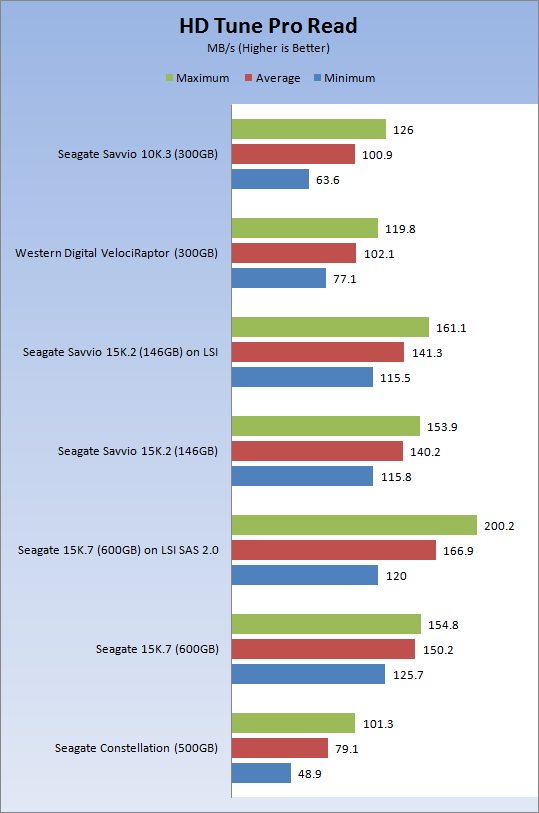 The Seagate Savvio 10K.3 has a higher maximum STR speed than the VelociRaptor, but when it comes to the average both drives are nearly identical. The problem is the VelociRaptor is able to transfer data faster at the end of the stroke where hard drives are slower to their worst performance. 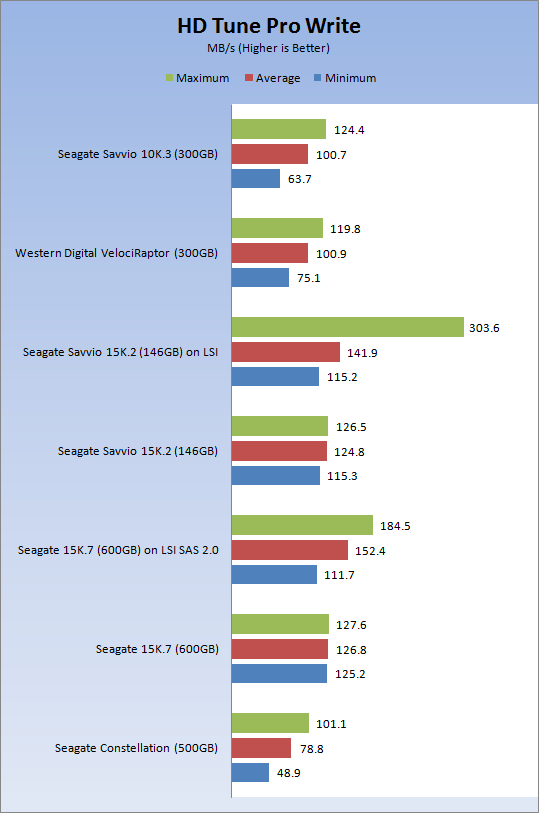 The write speed tests are almost identical with the Seagate Savvio 10K.3 doing well at the start but finishing poorly. Once again the VelociRaptor hits nearly identical at the average mark. 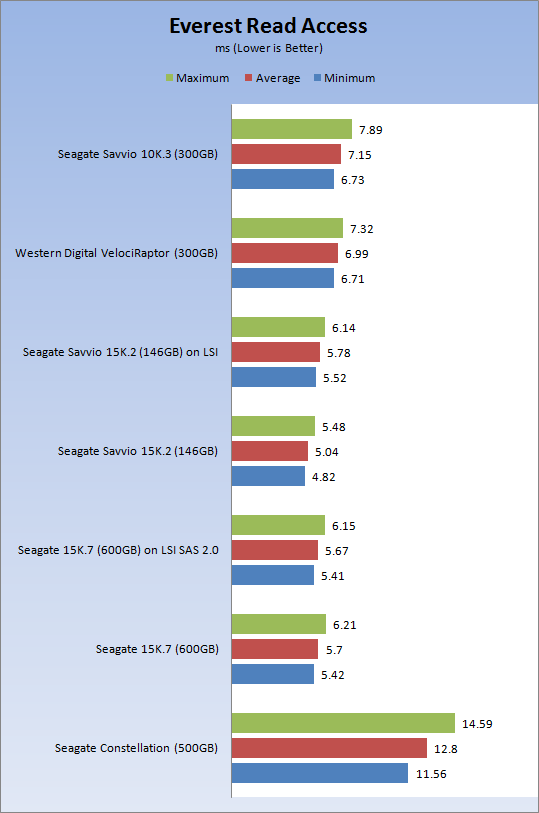 The whole point of moving platters at 10K and 15K RPMs is to decrease the time it takes for the platters to align data with the read / write heads. Here we see the 10K RPM drives putting up nearly identical numbers. 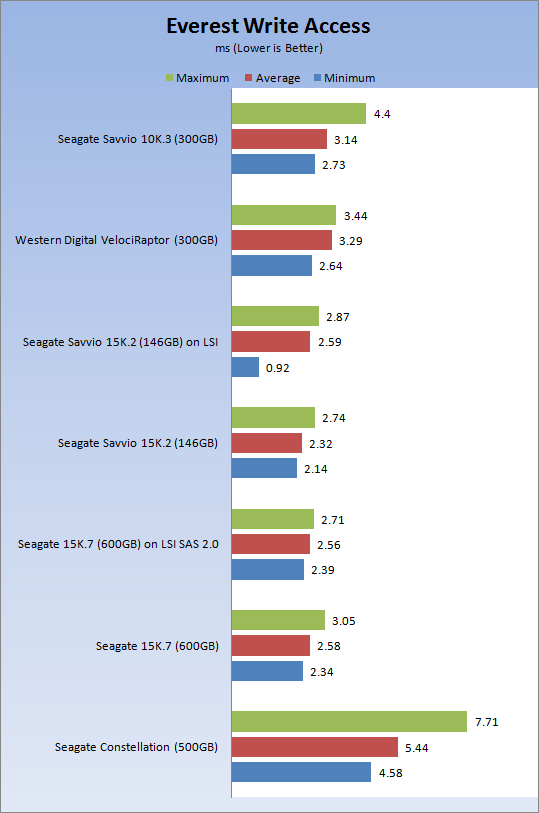 The Seagate Savvio 10K.3 had a couple of peaks in its tests that gave it a higher maximum score; these were very short bursts that registered in the software. Aside from the peaks the average score was better than the VelociRaptor.

Our real world desktop test show the Savvio 10K.3 lagging right behind the Western Digital VelociRaptor in all of the tests. 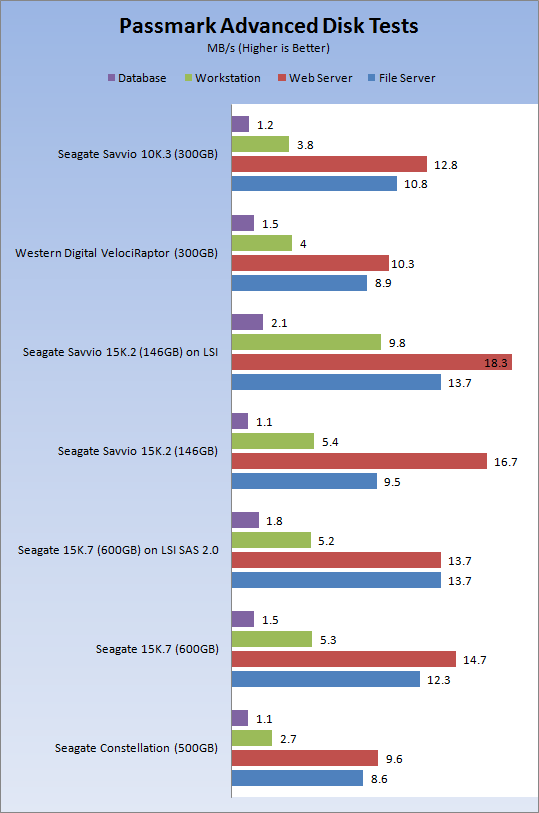 The server tests are where all of the drives in this graph show their true worth in your enterprise server and these tests are very sensitive. 1 MB/s difference is a large number in these tests.

Here we see the Seagate Savvio 10K.3 beating the VelociRaptor in the File and Web Server tests, but taking a back seat in the Workstation and Database tests by a small margin.

After spending some time testing Seagate's Savvio drives with different configurations on the LSI MegaRAID 9260-8i, it became clear that the Savvio 10K.3 didn't see any benefit from the controller's SAS 2.0 interface other than the boost in write performance from the cache. The Savvio 15K.2 and Cheetah 15K.7 both saw a boost. That said, you will be perfectly fine running the 10K.3 on your existing SAS RAID controller and not need to worry about upgrading.

The performance of the Seagate 10K.3 is quite high when compared to 7,200 RPM drives like the Seagate Constellation, but I am sad to report that the Western Digital VelociRaptor runs nearly identical in most tests. When it comes to cost of ownership the VelociRaptor also has the 10K.3 beat.

Since our tests were all single drive performance, it is still difficult to see how these drives would compare in real world usage tests since nearly all of the Savvio drives sold end up in RAID arrays in servers. Our single drive server tests had the 10K.3 outperforming the VelociRaptor in both File and Web Server patterns.

Over the next few weeks we are going to spend a great deal of time testing other enterprise hard drives to find the best in class in each category. Our two weeks of Seagate testing is just the beginning.