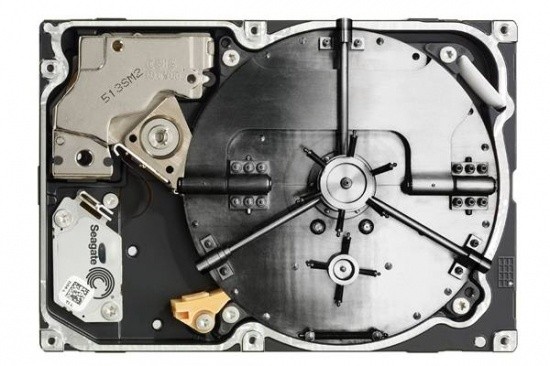 
In February 2004 Seagate Technology announced the world's first 2.5 inch form factor enterprise hard drive. The product series was Savvio and although the first year was a little slow, the market has now caught on and the 2.5 inch standard has taken off like a rocket. Unlike notebook and most solid state drives, Seagate's enterprise drives are 12.5mm tall and do not fit in a majority of notebooks due to the height and SAS interface.

While the consumer market has been slow to adapt the 2.5 inch form factor standard, progress is being made. The QNAP TS-419P we just reviewed weeks ago was the first consumer level NAS to accept both 2.5 and 3.5 inch drives. QNAP also has a couple of 2.5 inch only NAS servers in their product line up. SSDs have been a hot topic for the past year and desktop chassis manufacturers are starting to include 2.5 inch adapters in their cases.

Real progress for 2.5 is coming from the enterprise market where many servers have been launched with bays only for these miniature drives. The premise is simple; smaller drives means you can fit more in the same amount of space. When it comes to rack mount servers space comes at a premium and it is sold in 1.75 inch sections. In a typical 1U server where the hard drives are mounted in removable bays, you could fit four 3.5 inch bays. Take that same server and configure it for 2.5 inch drives and you can add an extra row vertically and horizontally to make it a ten drive server.

The Seagate Savvio 15K.2 is a second generation 2.5 inch form factor hard drive that uses the SAS 2.0, 6Gb/s interface. Let's move on and check out the full specifications. 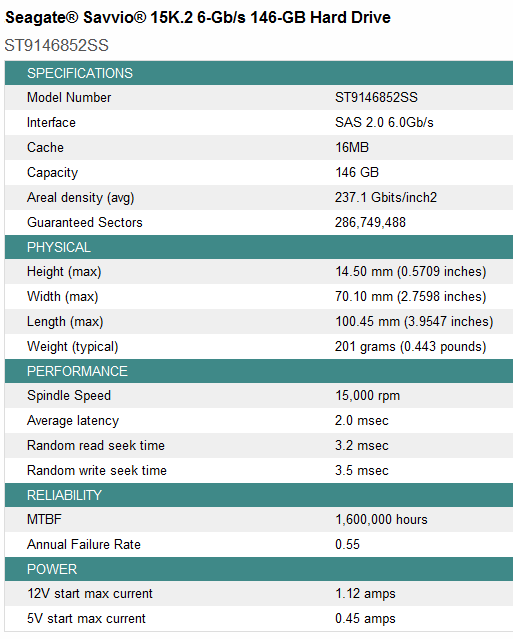 Seagate makes both 10 and 15K RPM drives for their Savvio Series and you can distinguish them apart by the model number quite easily. All Savvio drives are 2.5 inch form factor; the two newest models are the 15K.2 that we are reviewing here today and the 10K.3 that we will review shortly. Both of the drives offer support for SAS 2.0, the latest 6 Gb/s interface that just recently started to emerge on the market. For this review we are going to focus on the Seagate Savvio 15K.2.

Looking at the specifications list, the Savvio 15K.2 reminds us of the Cheetah 15K.7 that we reviewed just recently. Both drives share the same amount of cache and the performance is similar. The Cheetah series drives are Seagate's 3.5 inch form factor flagship models that are capable of more capacity, but that capacity comes at the cost of higher power consumption. That said, the 2.5 inch form factor drives use significantly less power than their 3.5 inch counterparts. 2.5 inch drives also produce less heat on average and of course you can fit more of them into the same amount of available space.

The Savvio 15K.2 is available in 73 and 146GB capacities. Other than the capacity differences, both drives share the same amount of cache and SAS 2.0 interface. After doing a few searches I was able to find the 73GB version for 220 USD and the 146GB for 266 from CDW. Obviously the better value when it comes to capacity to cost is the 146GB version that we are testing here today.

Let's dive in and have a look at the Seagate Savvio 15K.2. 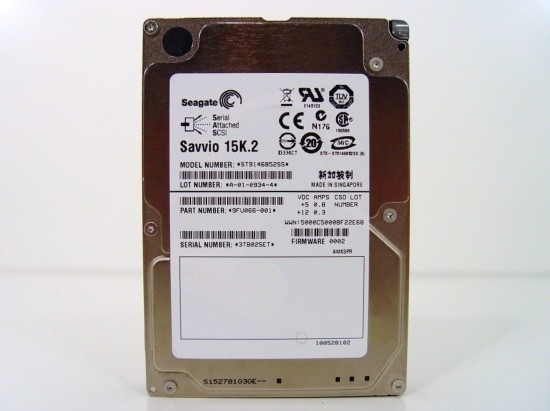 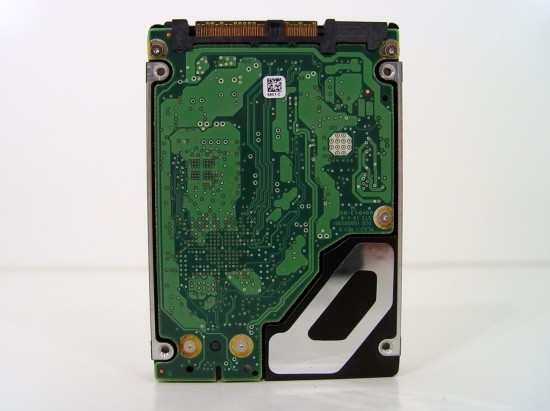 A couple of years ago Seagate started mounting all of the components on the other side of the board, so there isn't much to see here. 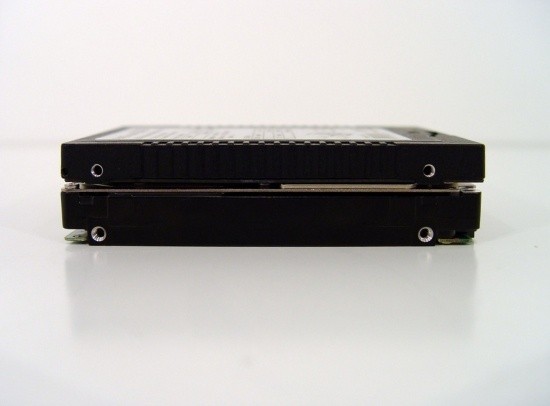 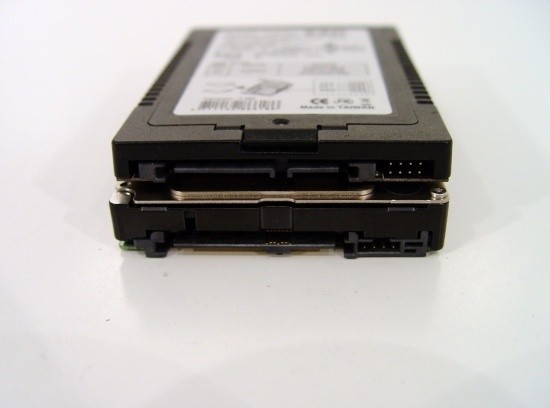 The power and data connectors for SAS are a little different than SATA. Here we see SAS on the bottom and SATA on the top. 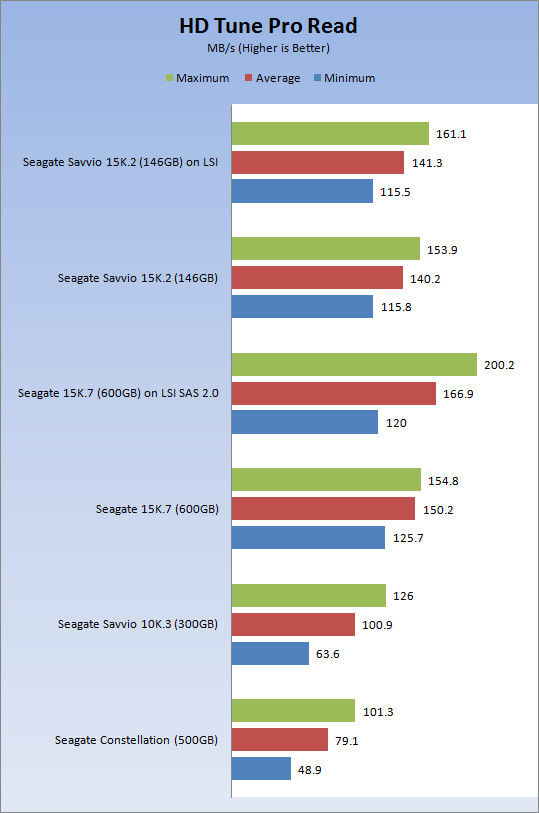 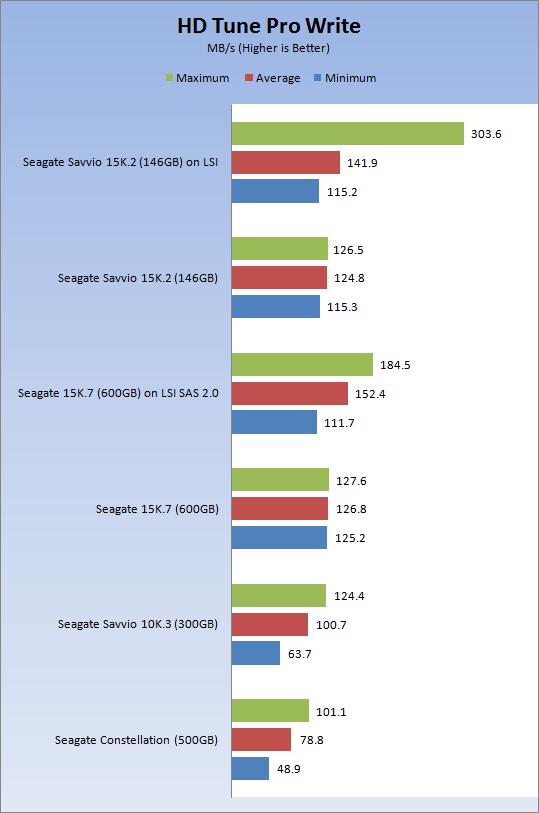 The LSI MegaRAID 92600-8i has 512MB of cache that sometimes throws the maximum write speed numbers off, so we are going to ignore the 300 MB/s burst of the 15K.2 and focus on the average numbers. Here we see that to get the most out of the 15K RPM SAS drives, you really need to use a SAS 2.0 controller. Here the averages are significantly higher with the controller for both the Cheetah and Savvio 15K's. The Savvio 15K is a little slower once again than the Cheetah, but as you can see, much faster than the Savvio 10K. 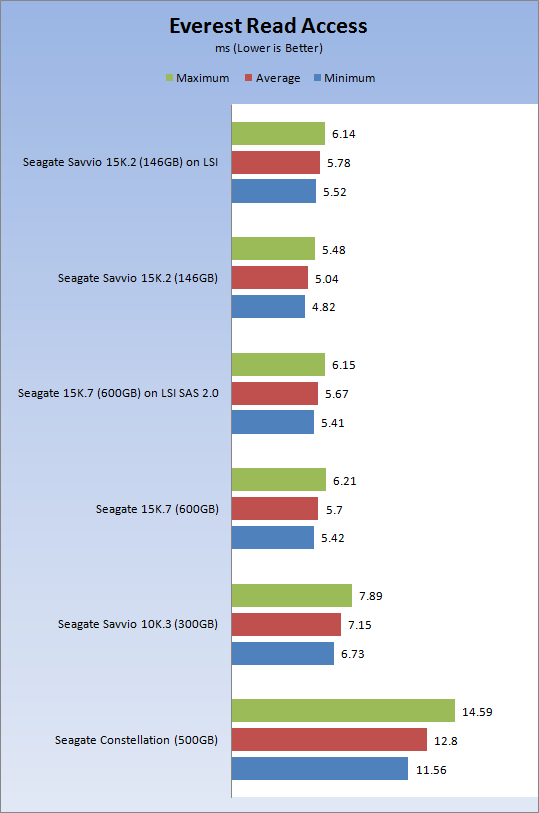 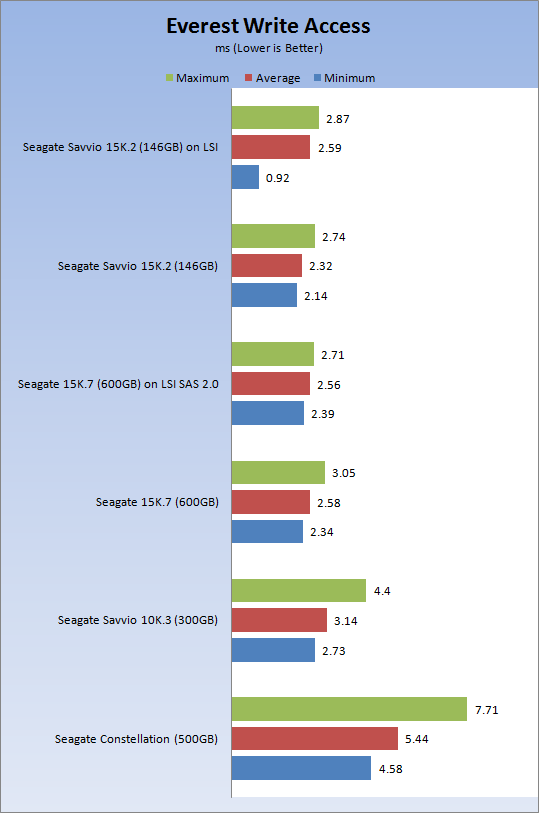 The 512MB cache on the LSI MegaRAID does play games with our write access time numbers, but we get a good idea from the random access numbers. The 15K.2 has very lower write access times that are on par with the Cheetah 15K.7.

Once again we see the Seagate Savvio 15K.2 with and without SAS 2.0. Without it the drive is plenty fast, but with the aid of the controller the drive opens up and gets to really stretch its legs. The 15K.2 also shows it dominance to the Savvio 10K.3. 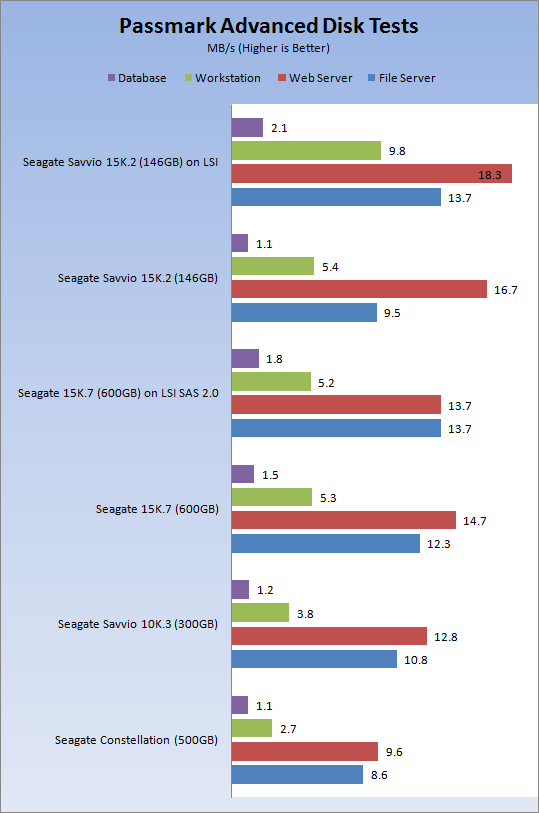 The Passmark Advanced Disk Tests are what the Savvio is made for. Here we see stellar performance over the 7,200 and 10K drives. Once again the tests ran with SAS 2.0 show a performance improvement right from the start, something that we are not seeing with SATA 6 Gb/s.

The Savvio Series with its 2.5 inch form factor has really caught on for enterprise use. We are now starting to see consumer and small business products use the same interface. QNAP in January launched their TS-439 Pro Turbo NAS, a 2.5 inch form factor only NAS server. While the system can only use SATA interface hard drives, it is a start. Thecus has recently started selling two SAS systems, the N7700 SAS and N8800 SAS. Both are built for full size 3.5 inch drives, but it should not be long before we see a convergence of the two, making affordable, consumer and small business NAS servers available to everyone.

For now servers like the one above from Sun make full use of the 2.5 inch standard. In the picture above we see a 2U (around 3 inch tall) rack mount system that can house 16 drives and still keep an optical ROM drive as well as some direct ventilation to cool processors and memory.

When it comes to the performance of the Seagate Savvio 15K.2, the 146GB drive is capable of churning data at near Cheetah speeds while using less power and having a smaller footprint that allows more drives to occupy less space. Even more surprising is the fact that the Savvio drives cost less than the Cheetah Series products. Generally smaller form factory technology is the opposite and costs more, but for once this is not the case. Couple a lower cost of ownership with lower power consumption with higher drive density and your company could see significantly lower overall cost in the server room.