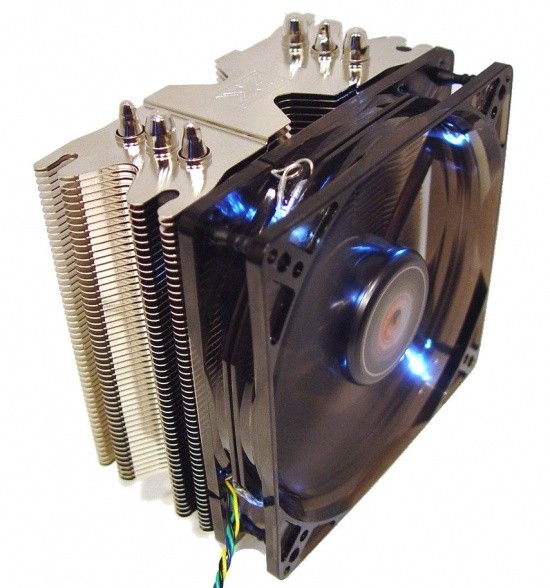 
Xigmatek has been gracious enough to allow me to test quite a few of their coolers. All of the usual suspects cross my mind; the 1283's, 1284's and even the Thor's Hammer. In between there have been many variations of each, except for the Hammer, mostly consisting in the beginning with a different fan. More recently, Xigmatek had gone the way of various Nickel plated coatings to enhance and refresh the coolers line. This time I am happy to say it isn't either of those reasons that has me excited about this cooler.

This time around, it is a bit more in depth than the more obvious increase of the CFM of the fan, or adding coatings for both performance and oxidation factors, as well as making cleaning a bit easier in my opinion, of which this new CPU cooler does have both. It has also got a more appealing figure. Xigmatek has provided a uniquely shaped 1283 cooler that is appealing to me, as it is a change from the same old thing.

As with most of the current line of Xigmatek CPU coolers, they are taking on the names of Norse gods and main players in their mythology. This time around is no exception, it takes on the name of Balder. This mythological man was most known for his death and rebirth, very fitting in my opinion of the cooler in my hands. I think it is about time to get some images and get the testing underway. Then we can see how well the rebirth of the 1283 goes for Xigmatek. 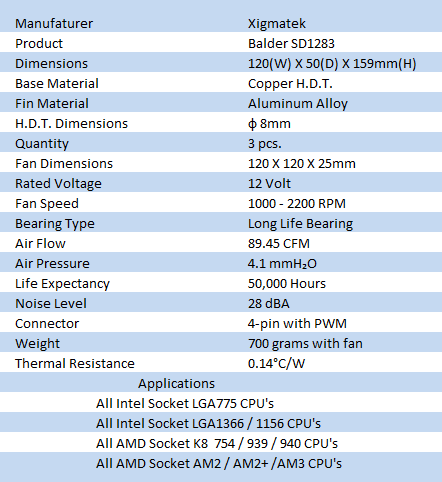 There isn't really much to discuss that we haven't covered with all the other 1283 coolers Xigmatek has released up till now. The Balder has the same 8mm diameter heat pipes sandwiched in a base, both made of copper. The pipes carry the heat into 51 Aluminum fins, pressed over the heat pipes. The main differences are fin design, overall shape and the ability to hold two fans, whilst still keeping weight to a slim 700 grams.

Cooling is handled by an 89 CFM fan, just like the one placed with the Dark Knight. The black body and white LED's make this 4-pin connected fan a great choice for the Balder as well. With up to 2200 RPM and 89 CFM, the Balder has its best chance at keeping to respectable temperatures. Due to the new design, Xigmatek loses a bit of fin area and the fan is a good choice to help compensate for the loss.

The Balder will fit any AMD since socket 754 and will fit any Intel from socket LGA775. This in mind, it is a good choice for its universal nature alone. While the cooler is yet to be released, most times when I get my sample it is only a few short weeks and they hit shelves anywhere. I was informed that the suggested retail of the Balder SD1283 is $46.99. Yes, it is a bit more than the basic 1283 series cooler, but the Balder does offer flash and elegance over its older brother. Now to let the testing speak for itself and see if the extra bit of money is worth the price. 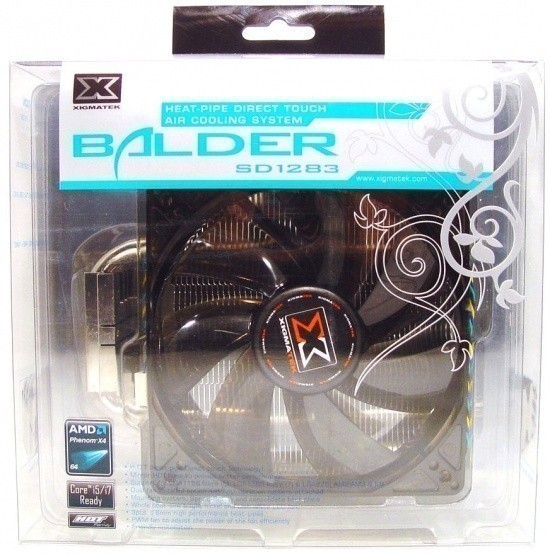 The Balder SD1283 is shipped in a see through plastic package with grey and teal highlights. A bit of scrollwork to the right draws your eye to the 120mm, LED lit fan. This HDT cooler also comes AMD ready as well as with i5 and i7 compatibility, as shown at the bottom. 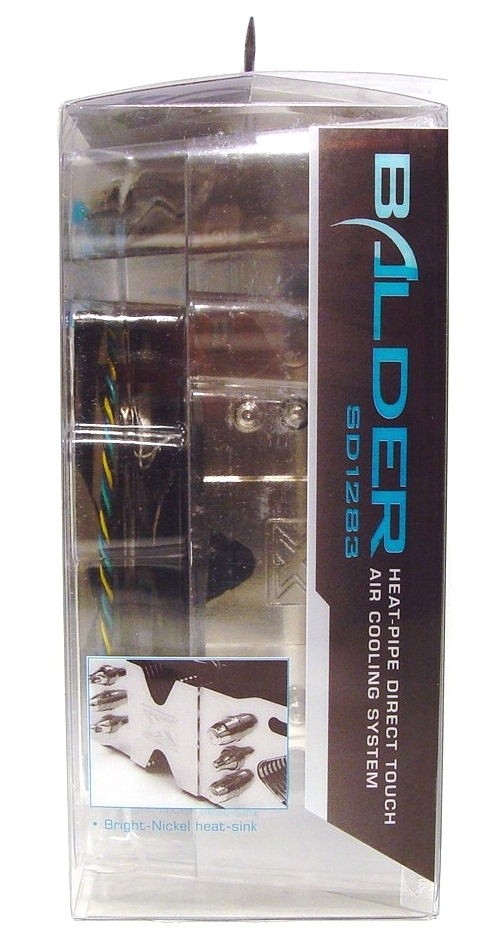 The right side of the package is clear as well, on this side allowing a view of the top of the Balder. At the bottom Xigmatek indicates the SD1283 is plated with "Bright-Nickel" just below the image of the fins. 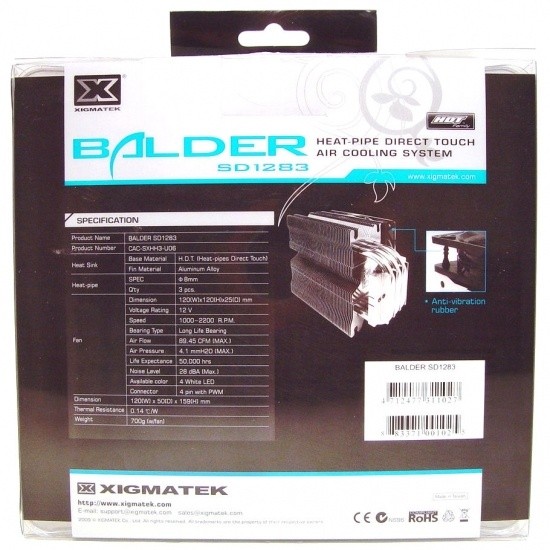 The rear of the packaging is backed in black; this allows a better view of the specifications chart and the images to the right are about the anti-vibration fan mounts we have come to appreciate.

Getting our last look at the outer packaging, Xigmatek fills this side with the Balder's compatibility list. This cooler will fit any LGA775 cooler and newer sockets from Intel, as well as pretty much anything Socket 939 and after for AMD. 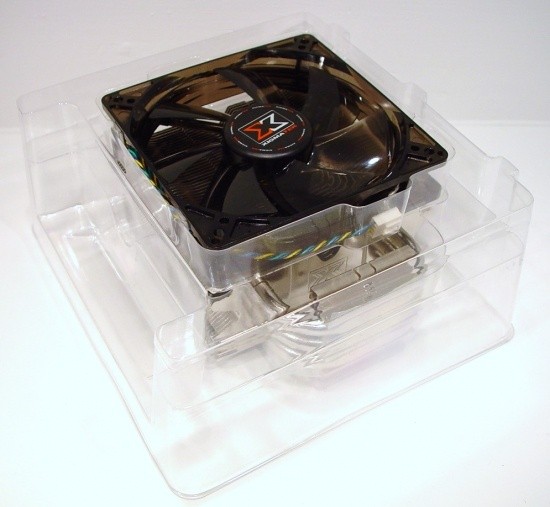 Removing the cooler from the outer packaging leaves us with more plastic on the inside. The Balder is housed in a two layer inner package. The first layer surrounds the fan, while the second layer surrounds the actual cooler, keeping both separated and secure during shipping. The indented section to the left is where all the hardware was shipped, which was removed for this image. 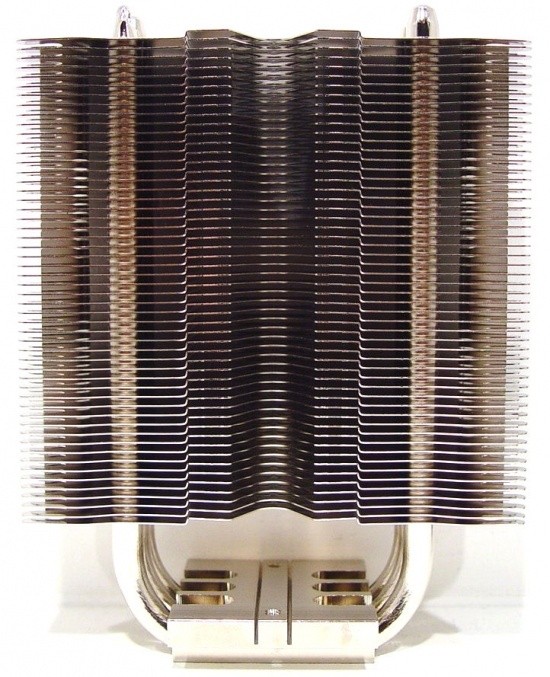 We get our first look at the new 51 fin design. Starting with what we are used to seeing, a copper base with three HDT pipes going in to a large stack of aluminium fins. Like a few predecessors, this cooler is also plated in Nickel.

The last image had hints of the shape change going on with the Balder. This image of the side continues this. A couple of standouts are the enclosed sides, where they fold over the fins to recapture airflow to put it to better use. The second thing to note is the ability of a 1283 cooler to easily strap on two 120mm fans.

You've all waited long enough; here we have the "shape shot". Looking at the Balder from the top shows the new "X" design of the fins. Also as you could see before, the bump in the center of the fins carries all the way to the top, where Xigmatek proudly stamps their logo. 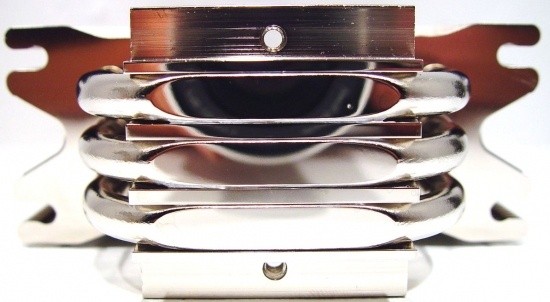 Moving on to the business end of the Balder, I was pleased to see one of the smoothest bases on a Xigmatek cooler I have seen to date. This base is very level and flat, aside from the gaps between the HDT pipes and the base support. My sample did arrive with a slight "ding" in the one pipe, but I don't think it will do much to hinder any testing, as it is on the outermost corner of where the IHS will make contact. 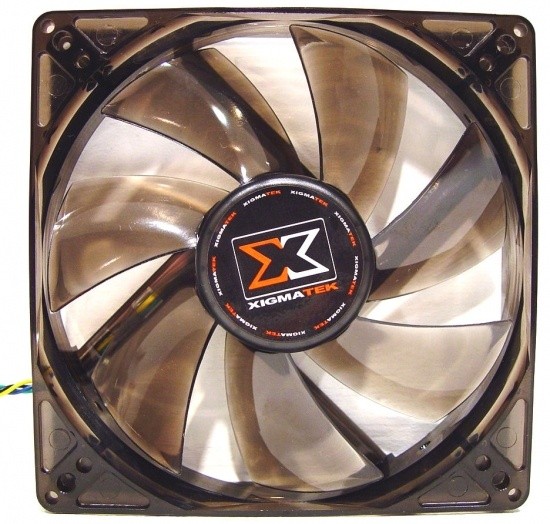 The fan of choice from Xigmatek is an 89 CFM, white LED, blackish coloured fan. Since there is a bit less fin surface area over say the basic S-1283, a strong fan is a good choice for companionship. 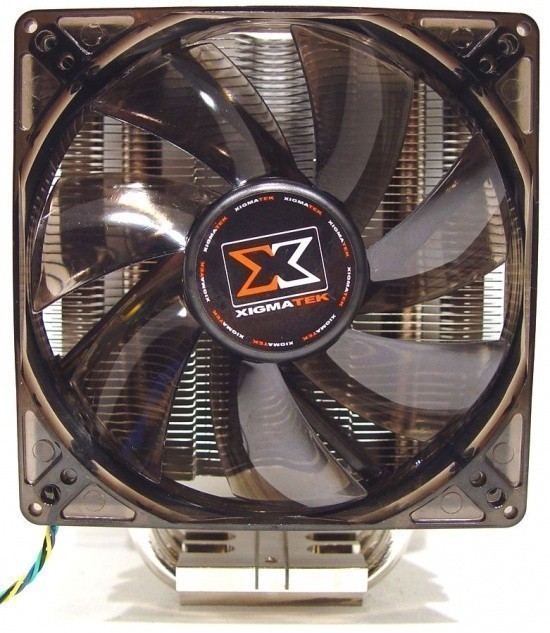 In typical Xigmatek fashion, the 120mm fan covers almost all of the fins and is an attractive contrast against the "bright-Nickel" plating. 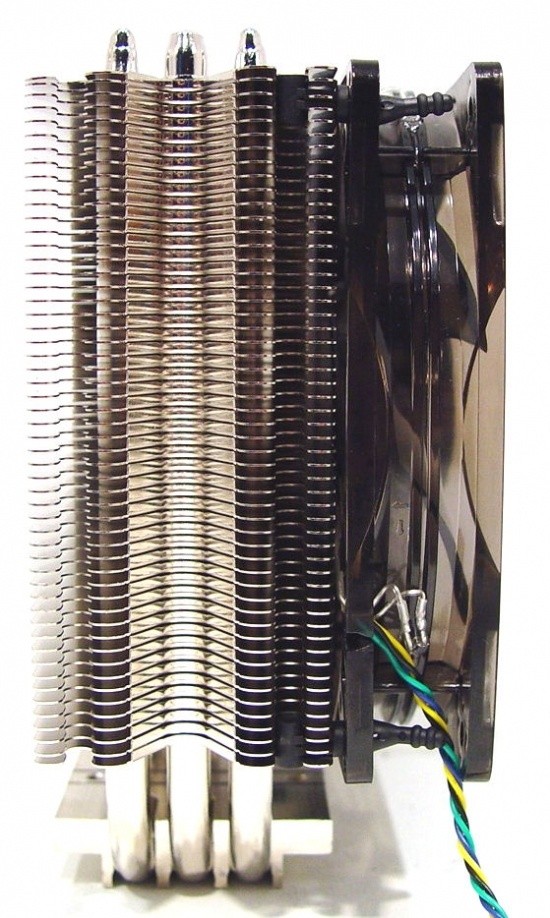 In this profile image, you can see the cooler is as wide as the rest of the S1283's and still may cause issues with taller spreaders on RAM modules if the slots nearest the CPU are used. 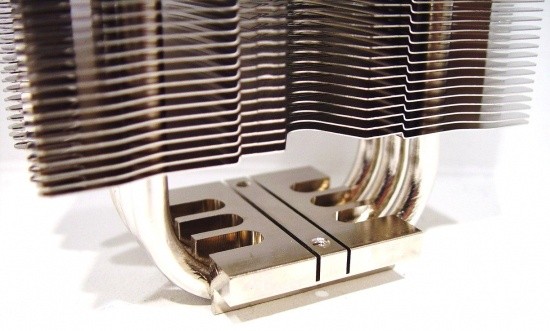 Something I personally would love to see on the 1283 series is grooves in the opposite direction on the top of the base. I realize this would take a new AMD latch bar, but I know a lot of AMD users put off this cooler due to the way it aligns in the case on the motherboard. Besides that, the two holes are there to accept the legs for Intel mounting.

Xigmatek ships a nice little hardware assortment with the Balder. You get an AMD latch bar, Intel universal back plate and the accompanying legs that attach to the base. A baggie with eight, anti-vibration fan mounts, a little packet of TIM and another baggie with the four Intel mounting screws and springs, and the two screws to mount the legs complete the list. 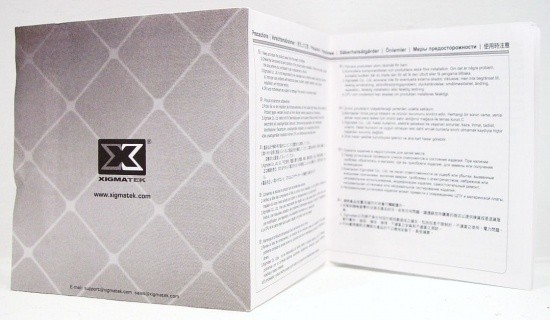 Xigmatek also ships a pretty comprehensive manual with a check list. If you have used a Xigmatek before, there is nothing new to expect. If you haven't, these instructions will lead you right on through the installation with ease. 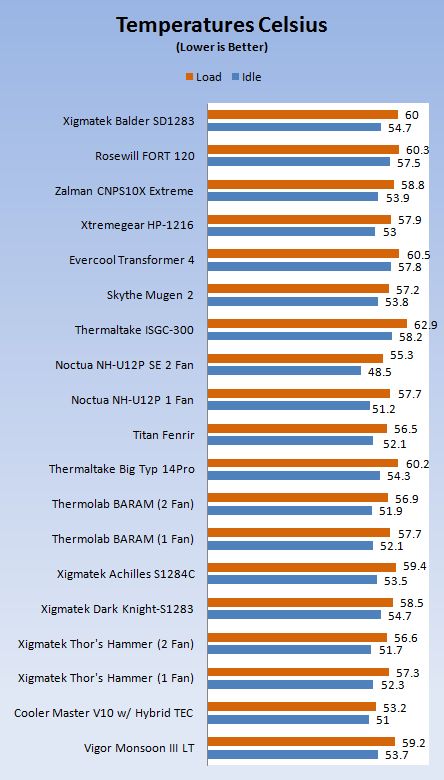 Compared with just other Xigmateks on the list, the Balder plays right in where I would have expected it. It is just a touch behind the Dark Knight, which uses a similar fan and has a bit more surface area. I have to say Xigmatek did a nice job eliminating fin area and still keeping performance on par. 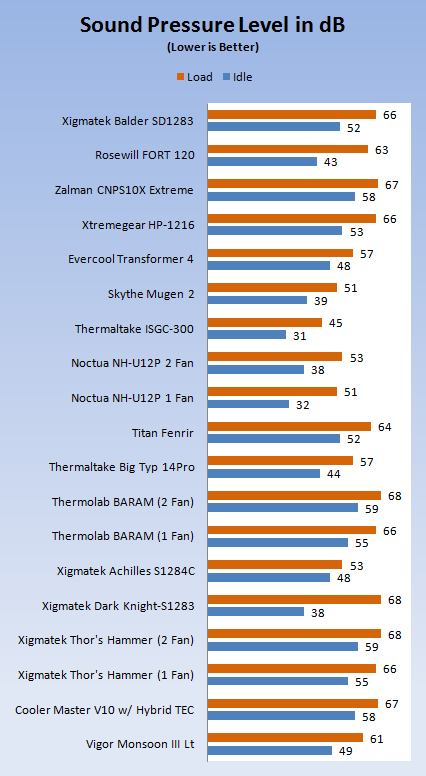 I hate to keep using the word typical, but the noise levels of the accompanying 89 CFM fan is right where it should be, so I guess I should use 'expected' for my results over typical. I do wish Xigmatek would have sent a second fan for testing the push/pull effectiveness. I would imagine you can get another two degrees at least with a second matching fan.

Being a sucker for unique shapes and appealing looks, the Balder struck a chord right off the bat with me. Looking past the sexiness of the cooler is the intention. The testing showed the Balder is what we should expect from the 1283 coolers, just this time a little differently. The new fin design for Xigmatek is an attractive start. Adding the black fan with white LED's is a plus, but plating the entire cooler in "Bright-Nickel" takes it over the top for me, then to see it is dual fan compatible just takes it over the edge of what I want to see in a Xigmatek cooler; they hit the nail on the head with the Balder.

A couple of issues I need to sort through. The ding in the heat pipe is unacceptable. Looking at the packaging, the damage had to be done before the box was sealed. I understand people have bad days at work, but that should have been easily spotted and pulled from the line. The second complaint isn't even for me, as I am an avid Intel user. I would like to see an additional set of grooves in the base for AMD users. With this small setback overcome, I think there would be no reason not to suggest the Balder to any user with accommodating chassis conditions.

In my opinion, the little bit of a premium price is worth it to me. Not only do I get my flashiness that I love, but I get performance levels that I have come to expect from Xigmatek. The $46.99 is only the MSRP, which means once it hits shelves it can be had possibly even cheaper. I for one am glad Xigmatek has changed the square fins, moving to the "x" configuration. This makes the Balder not only a rebirth for Xigmatek's 1283 lineup, but a nice choice for cooling in any rig.