When you are putting together a high-end system your choice of memory is usually second or third on your list of parts. This is even more so true now that both sides of the house have memory controllers built directly into the CPU. After all, without good, stable and fast memory your expensive CPU can become an annoyance rather than a joy.

So, what do we look for these days from our RAM? Well, if you were looking for a Socket 775 CPU you wanted the fastest RAM you could find. This helped to overcome the issue of having the memory controller in the NorthBridge.

If you are looking for an AMD CPU you want the best balance of speed and latency. This is now also true of the Nehalem, as the internal memory controller is as fast as the CPU bus, but can be seriously affected by latency.

So we see that looking for the right memory is an interesting process, especially with the advent of dual channel, triple channel, Intel's XMP Profiles and of course manufacturers "certifying" everything for this or that platform.

Today we take a look at Corsair's Dominator GT for Lynnfield.This is a PC3-12800 (DDR3-1600) 8GB kit (4x 2GB) that offers some stylish looks and some good performance. The one thing that it has over many other kits in the same line is lower stock latency. This means that the SPD (Serial Presence Device) will tell the motherboard and memory controller that it is CL8 from the moment you drop it in.

Let's take a look and see if this kit can give you a performance edge at stock speeds and also what it is capable of when we push it a little.

We did not have the full retail packaging so unfortunately we cannot comment on how it is laid out or how well it would protect the Dominator or fan that we were sent.

Each of the modules sent to us arrived in a plastic clamshell that did a good job of protecting them from shipping damage. 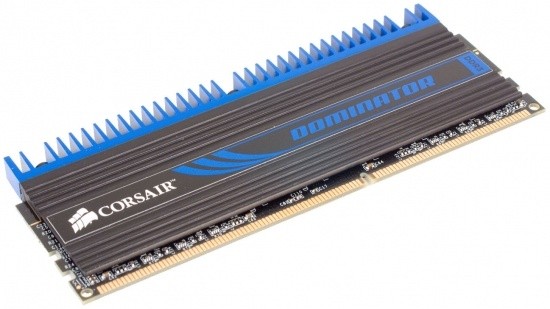 The actual Dominator GT modules are interesting looking. They are bulky and quite weighty for RAM, but all of that is in the name of cooling. The outer shell is ridged and thick to allow for efficient transfer of heat from the actual chips to the sink. 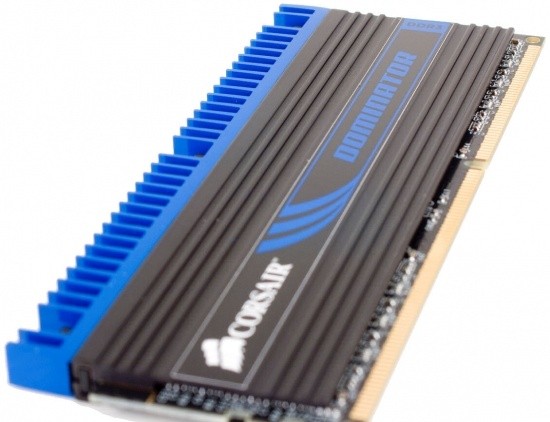 On top of each is a row of short and thick fins. These do a good job of maintaining a stable operating temperature and add a bit of flare with their "Intel" blue coloring. 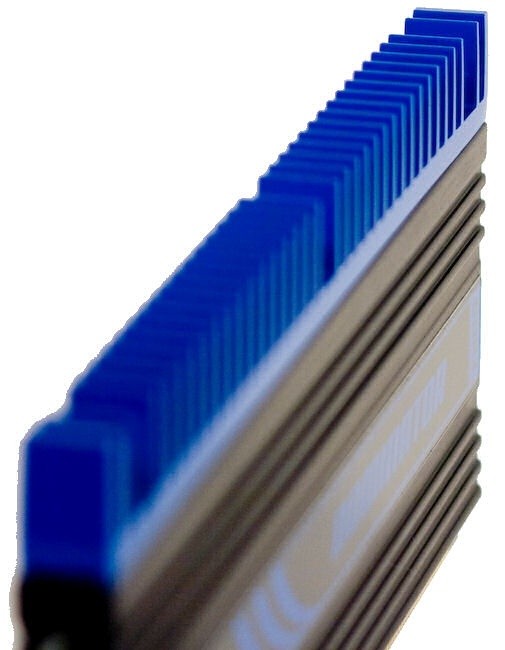 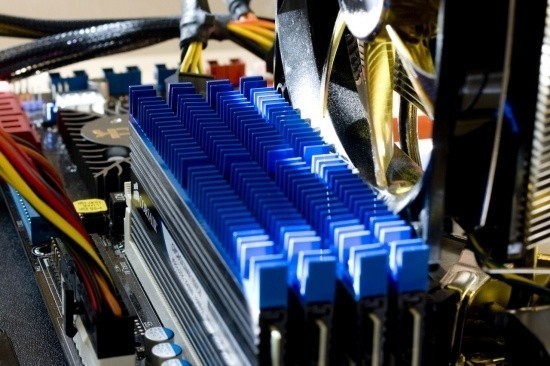 The Dominator GTs that we received are labeled as 1600MHz and having timings of 8-8-8-24. The operating voltage at 1600MHz is 1.65v These samples are also labeled as Version 3.1 This means that they do not have the Elpida chips that caused so much of a headache before. All of the 3.X series have Micron chips under the spreaders which should give a decent and stable overclock. 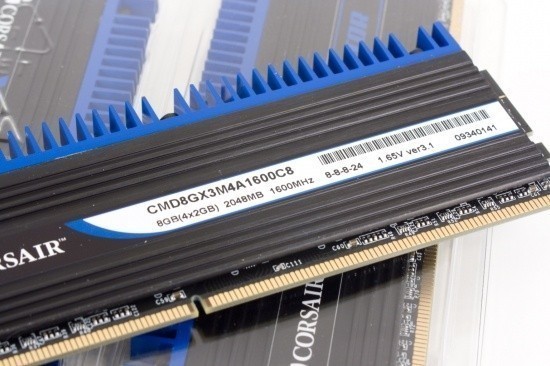 According to few sources the 3.1 will not clock as high as the 3.2 (which can reach as high as 1900MHz) so we are expecting around 1800MHz stable once we get them on the bench.

Corsair also included a cooling fan intended to make sure that your RAM keeps cool at high overclocks. This is also a very industrial looking item with large visible bolts, two fans and a blocky design. 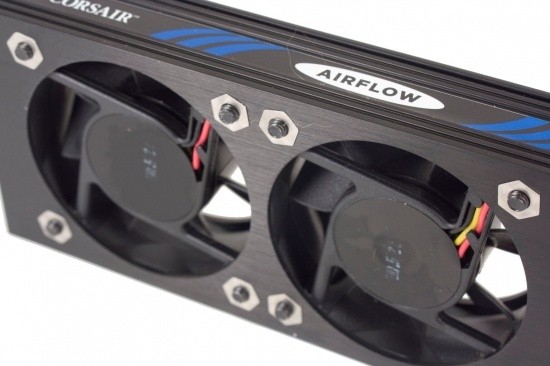 There is a down side (well, more than one) to using this cooler, though. The first problem has to do with the way most boards are laid out. If you are using any kind of high performance tower cooler you are not going to be able to place the fan over the RAM properly. Of course, this is true with almost all of the coolers out there including the one from Kingston. 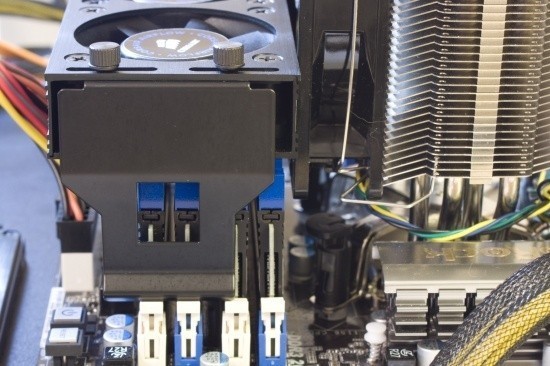 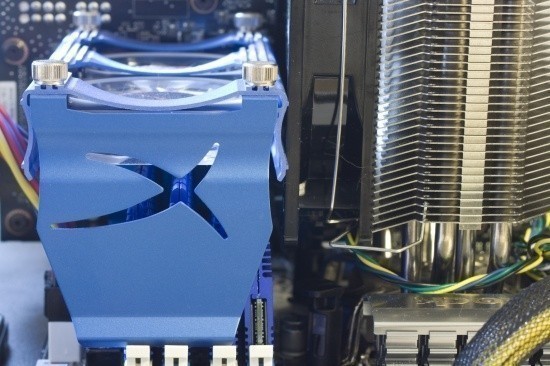 The second is that the Corsair cooler is simply loud. As the fans are small and high speed they make a high pitched sound that can get quite annoying. This is one cooler that would certainly benefit from a fan controller.

Overclocking RAM has two schools of thought. The first and most common is looking for the fastest speed you can get. This is what most people think of when you mention overclocking. But there is a second method that has been around for a while and is growing in momentum. This is finding the tightest timings you can get and is actually more important with an internal memory controller than just simply pushing the MHz up as high as you can get.

For our testing we tried out both methods and then checked to see what the performance difference was (if any).

On the other end of the spectrum we were able to get 1600MHz at 7-8-8-22 1T which seemed to give us the best performance. We included all of our overclocking results with the performance results below.

In other testing the Corsair Dominator GT did allow us to get an 8th place mark in SuperPi Mod 1.5 (from Xtreme Systems) for the hardware used and a high point benchable OC of 4426MHz on our Core i5 750. 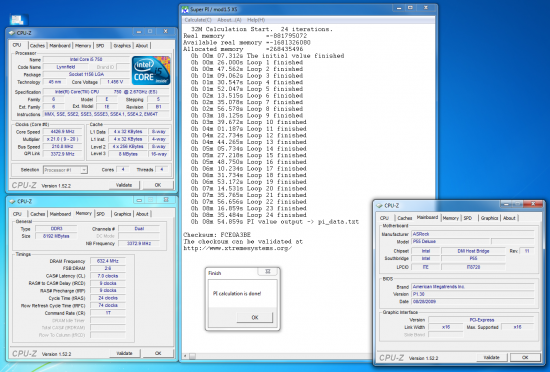 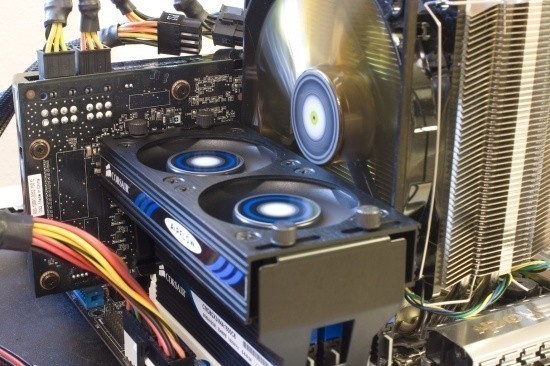 With our testing we wanted to make sure the CPU stayed at its rated speed while we kicked up the speed on the RAM. We did this using the easy settings found on the ASRock P55. However, as with any testing that changes the internal core clock of the CPU you will see a performance increase over stock speeds. For our timings testing we predominantly played with the Latency and Command rate as they have the most direct effect on performance and stability. 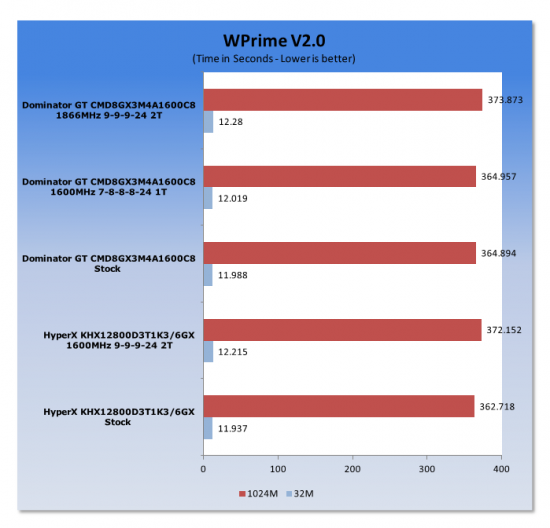 Interestingly enough the Dominator GT is not as fast as the Kingston offering at stock speeds (and with looser timings) in this test, although the time difference is measured in 100ths of a second. When we push the Corsair up to 1600MHz and drop the CL to 7 and the command rate to 1T we do see an improvement, but again it is a very small gain over the Corsair and a slight drop from what the SPD sets that RAM at. 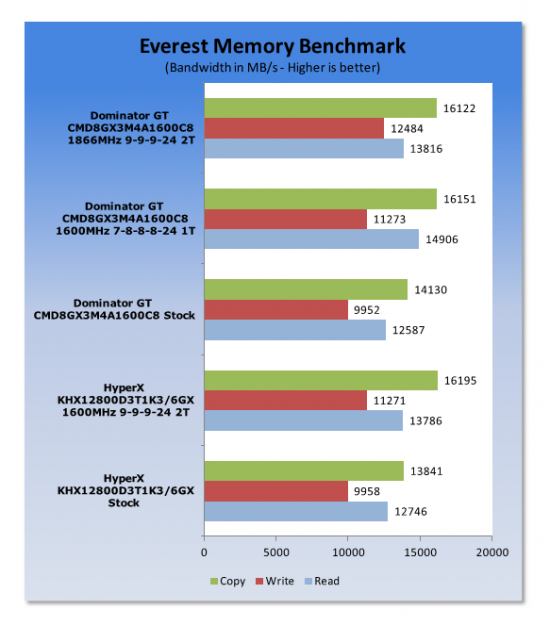 Our EVEREST numbers are all over the place. At stock speeds the Corsair Dominator RAM is a hair slower in reads and writes, but faster at copying data from one portion of RAM to another. When pushed to 1600MHz the Corsair wins read speed, but not at write or copy.

It is interesting to see how each type of memory usage is impacted at different speeds and timings. In all the best overall performance comes from the Corsair Dominator GT running at 1600MHZ with a CL of 7 and Command rate of 1T. 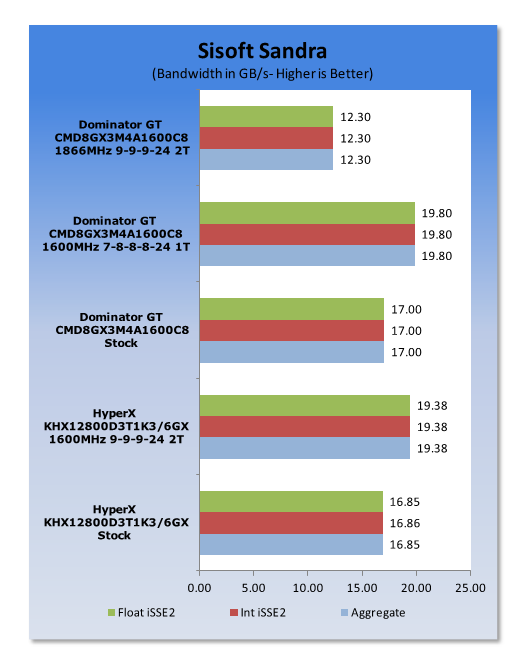 HyperPi 0.99b is a front end that allows for multiple instances of SuperPi to be run on a system. SuperPi is a mathematical program designed to calculate the number Pi to a specific number of decimal places. In terms of memory testing it is stressful as it runs one instance per physical or logical core. This means that your system memory has to buffer the calculations for the number of cores (in this case 4) available on your CPU. For our testing we use a 32M run. This means that the system memory is trying to buffer four Pi calculations out to 32 million decimal places. 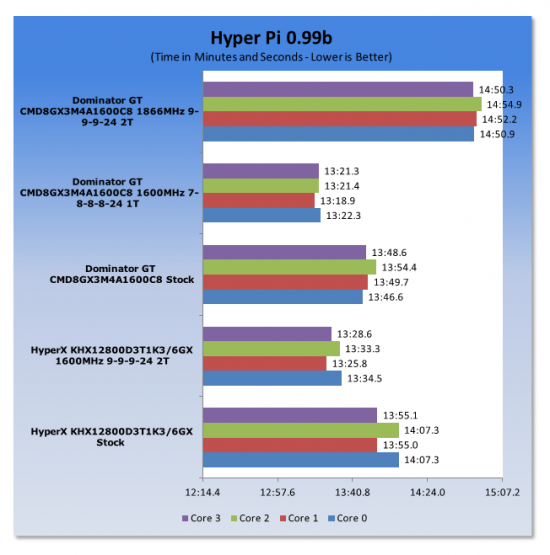 Our HyperPi testing shows us again that higher clock speeds are not much of an improvement if you have to loosen timings to get there. Our best performance was again at 1600MHz, CL7, 1T. 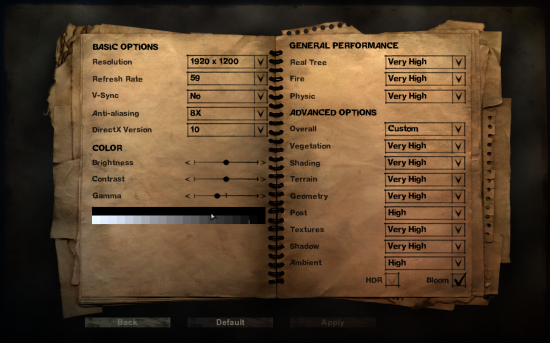 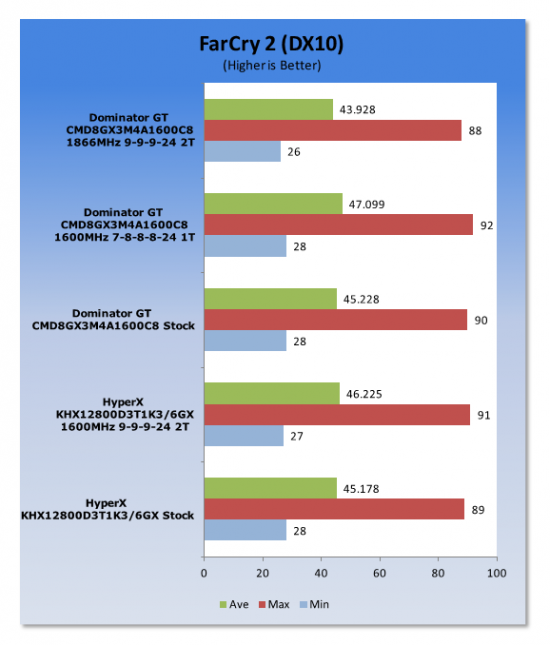 Memory in gaming is not a big factor in terms of performance. With more complex and GPU centric gaming engines system memory only plays a part in terms of size and not speed. Our testing showed almost no performance difference between the two brands and at any of the speeds tested. We saw the biggest "hit" at 1866 with a massive loss of 1.25FPS.

The Corsair Dominator GT is some good RAM. Without too much effort we were able to get a decently high overclock in terms of speed, but found that we had to loosen the timings too much for it to be of any performance value. On the other hand, the tighter than normal timings at stock and labeled speed gave us a nice performance boost that was noticeable for most of our testing.

Pricewise it was not the most expensive kit we found, but it was also not the cheapest. Newegg are currently listing it for $244.99 U.S. with free shipping. This is good value if you are looking for a good 8GB kit of RAM that has potential for some decent overclocking. Still, there were some downsides (as we mentioned). The fan is quite loud and not exactly something I would want to listen to for an extended period of time.

All in all, the Corsair Dominator GT 8GB kit for Lynnfield is a pretty good buy. For anyone running a Microsoft based 32-bit OS it is going to be useless, but as we move towards 64-bit computing this will be seen less and less. If you are in need of a ton of RAM with good speed for your new Lynnfield, this would not be a bad choice.