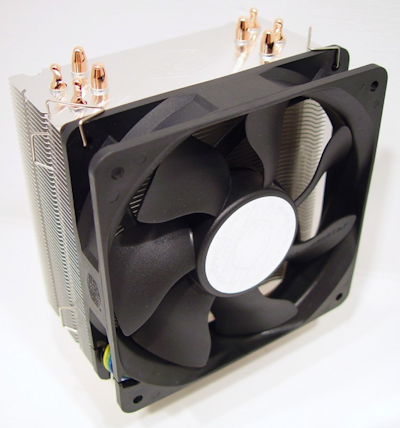 
I'm sure at this point most of you have seen or heard of the Hyper 21 from Cooler Master. This was one of the few, at the time, to offer a gap in the middle of the fin sets. I was able to test that cooler myself, but it was prior to my time with TweakTown, but I still remember what the 212 had to offer. To me the Hyper 212 was a good design, and very efficient for the lack of total surface area with all the missing middle bits of the fins. Yet this cooler has what it takes to keep temperatures at bay.

Rethinking a few things after the original Hyper 212 was released, Cooler Master saw the need to take the 212 back to the drawing board and see what they could do to offer a better solution. Not only is the actual cooler a bit different this time around, but they went with another style of fan. They also got together with the engineers to develop an all new mounting hardware, which are welcomed changes in my eyes.

I cannot make a direct comparison of temperatures however, as my testing method at that time was very different from the T.E.C.C. solution Chris created and what we use here today. I will however point out all the differences from the original design to the Hyper 212 Plus.

From what I remember of the Hyper 212 it was a descent cooler. A revision can only make things better, so let's get into the tests and see just how well Cooler Master did with the Hyper 212 Plus. 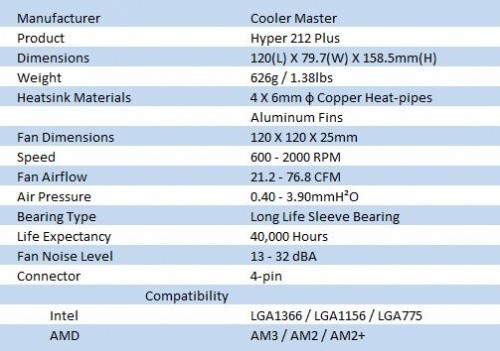 As I mentioned, Cooler Master did a bit of redesigning and incorporated some new ideas along the way. The base stays the same, with its four 6mm heap-pipes that are exposed to the CPU, that are held in place with an aluminum top. This time as the pipes travel up and out of the base, they are surrounded by 57, one piece fins, versus the two separated towers of the original. Dimensionally, the Hyper 212 is very similar to most other tower coolers in size and weighs in at 626 grams.

The 212 Plus also gets a new fan. Originally they used a translucent, black, nine bladed fan that puts out a maximum of 69.69 CFM. This time around Cooler Master accompanies this 212 with a black, seven bladed, 76.8 CFM variant. Both of these changes should add to the cooling efficiency, but let's wait for the testing numbers to provide us those answers.

Finding the Cooler Master Hyper 212 Plus is easy. Doing a bit of Google shopping shows most of the major e-tailers listing stock of this cooler. Looking around I wasn't able to find it at Newegg, but as I said, there are plenty of shops that do have stock. Most shops are asking in the 25-30 USD dollar range, of course plus shipping. Even so, the Cooler Master Hyper 212 Plus isn't hitting the wallet too hard at around $35-40 to get one to your door. 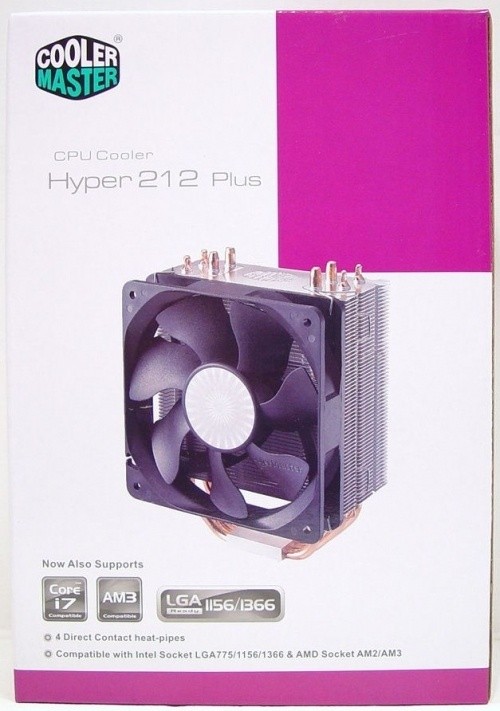 Just like the original, the new Hyper 212 Plus is boxed in the bright pink on white packaging. As usual there is a great image on the front of the cooler you are purchasing. One of the last new things Cooler Master incorporates in the 212 Plus is in the compatibility shown at the bottom.

The pink on white continues around the right side. Cooler Master uses most of this panel to display a thorough specifications list. 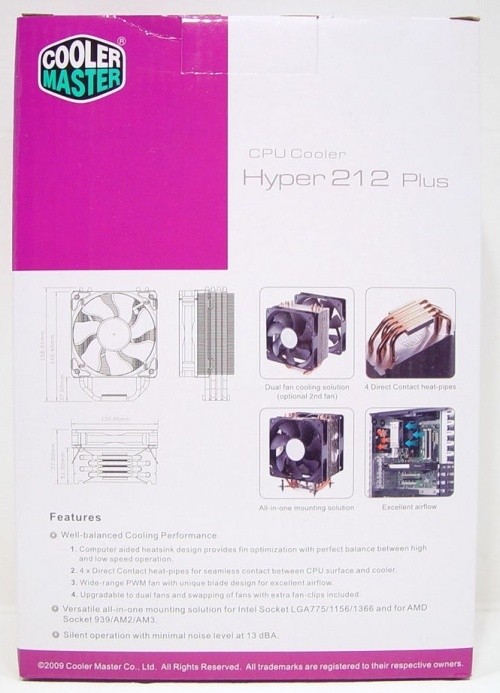 Spinning the package around to the rear you can see drawings with full dimensions, as well as a few product images displaying some of the features. At the very bottom they list four key features in text that coincide with the photos.

This side of the package is where Cooler Master says that it is a CPU cooler and to visit their site for more info in eighteen different languages. 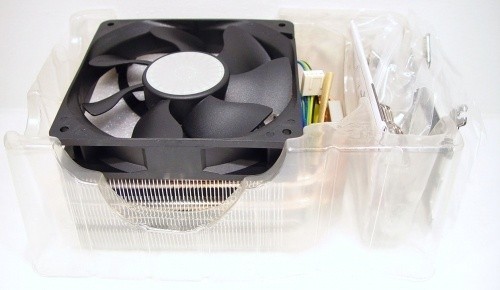 Once you open the flap at the top of the box, this plastic tray can be slid out. Cooler Master uses this to support the cooler in the center of the package, even taking the extra step to put foam between the fan and the fins to keep one from crushing the other during shipping. This inner tray also provides a well for the hardware to be shipped in, excluding the back-plate which is shipped outside the tray. 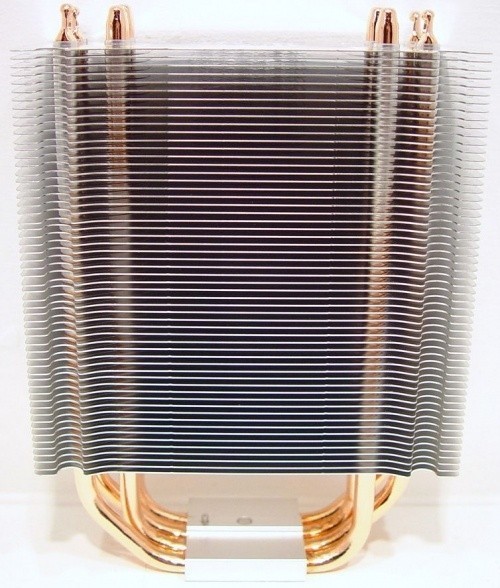 In similarity to the original, Cooler Master keeps the same base design with a slight change up on top. This hole and pin are part of the new mounting hardware I will show in a bit. The 212 Plus also keep the offset layout of the pipes as they travel through the fins. The major difference is the fin design itself. This time around, all the fins are one piece, adding plenty of added surface area to aid in more efficient cooling.

The aluminum fins are pressed on over the four, 6mm diameter heat-pipes. These fins are open on the ends and have two grooves cut into the ends to allow for two sets of the wire fan mounts so you may utilize a push-pull cooling method if desired.

Laying the Hyper 212 Plus on its side you can see the fins are stamped with the Cooler Master logo in the center. Also in the stamping there is a hint of the two separated towers of the past. The fins are also cut taller on the sides and shorter in the middle to keep the correct spacing of the fan before the flow enters over the fins. 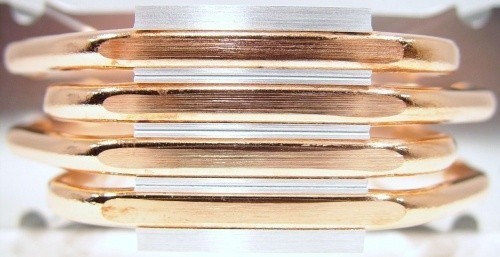 The base of the Hyper 212 Plus is a little rough by usual standards. The pipes are flat with each other, which is what really matters, but the spaces between are quite, well spacious. The typical glob in the center of the IHS isn't going to work so well here, I suggest you do a bit of spreading first. 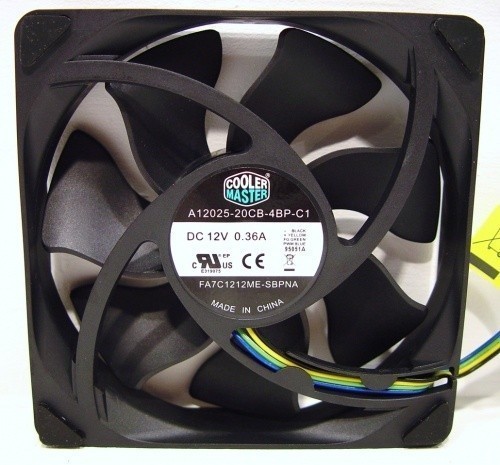 The back of this 78.9 CFM fan has little rubber pads in the corners to isolate the fins from any vibrations. The fan itself utilizes seven oddly shaped fins that at the same RPM of the original can offer a bit more airflow. 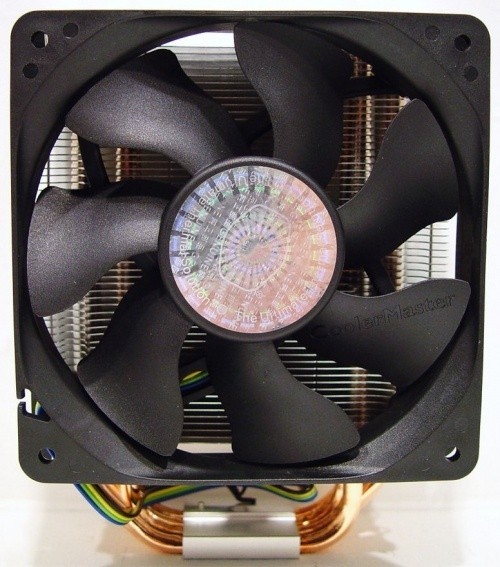 Once the fan was put into place I could see that is overlaps the fins both top and bottom, and gets good coverage of most of the fin surface area. 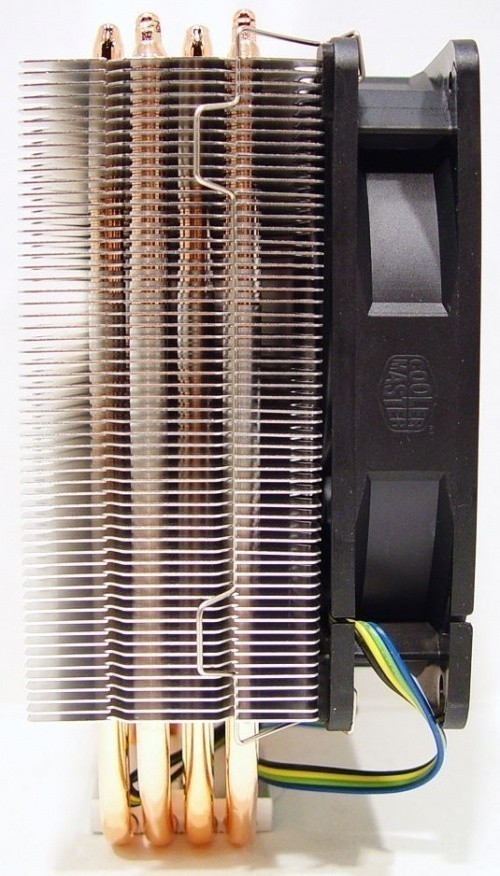 The wire fan mounting is easily done, just set the ends in the fan holes and slide it into the groove with the little handles. 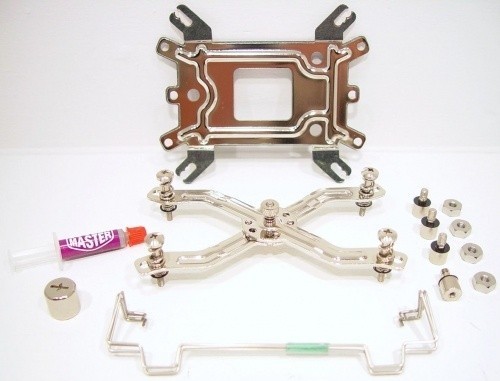 Here is the new hardware that is shipped with the Plus.

Cooler Master has designed an AMD and Intel universal back plate that allows for 775, i5, and i7, as well as all the AMD sockets since 754. The top half of this new kit is made of a "X" bracket. The bracket is adjustable in angle of the legs as well as the one of three positions of the mounting screws in the end. Carrying over from before is the rear mounted nus tans riser screws, that use the included socket.

Lastly, Cooler Master includes a syringe of TIM and four wire fan mounts taped together at the bottom. 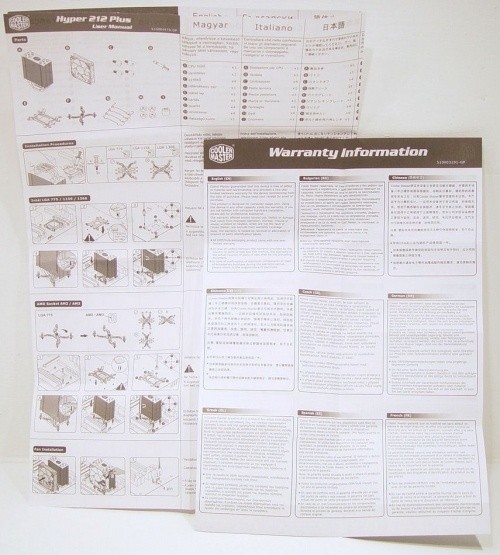 The manual and warranty information can be found folded up with the hardware. The Instructions are very well written. I say this due to the new hardware. While it is really easy to use, I looked at the instructions to figure out the finer points, like how to adjust the screws in the end and which position the angles should be. 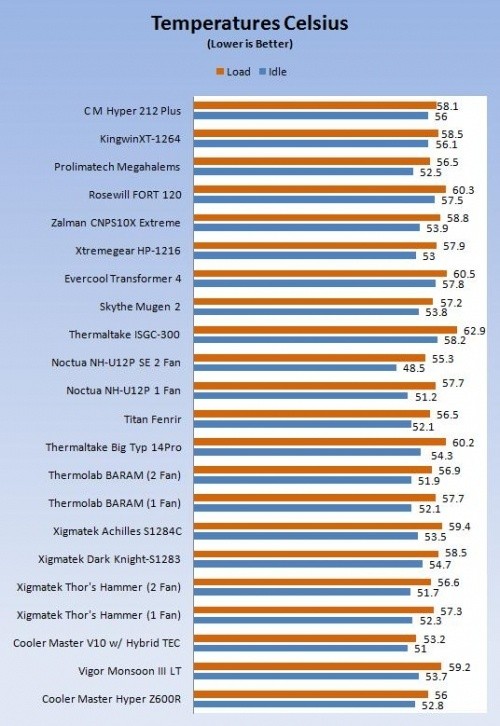 The Hyper 212 Pus holds its own amongst the competition. For instance look how close it is to my latest review. That sample used a 101 CFM fan to get similar results. If one was to strap two such fans on the 212 Plus you could drop another 2-3 degrees off of our results. 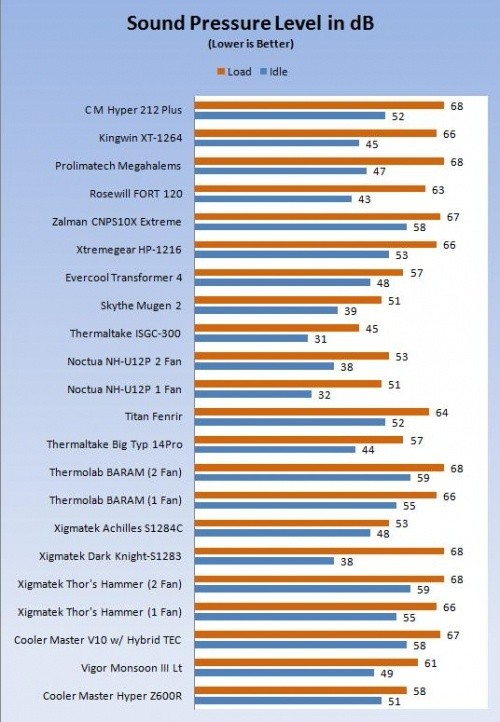 During idle testing the fan is near silent, only a slight audible hum is noticeable. While at load it does ramp up a bit, but well in the average again in this aspect. I tested this cooler as it was shipped in the box. For both sets of testing your results can vary depending on your choice of fan or fans.

In the end I am left with a better product than the original in almost every way. While the 212 Plus doesn't have the "coolness factor" of a twin tower design, it is still a formidable competitor to the market. The results we got were pretty average, but the fan Cooler Master chose tries to find a nice balance of cooling power without making your ears bleed doing so. For those who aren't bothered by jet engine like noise a few feet away, by all means get this and strap a couple 100+ CFM Delta's to it.

Improvements were made to not only the fin design and the swap of the fan, I really need to address the hardware. Ever since I have been doing reviews I have seen the same old hardware on almost everything Cooler Master offers. I for one am glad to see this new style of mounting. While you still have to have access to the rear of the board to set the back plate to the risers, at this time you can install the board without the cooler in place yet. Once everything is back in the case and you are ready, the new top piece allows for just this, screwing into the top of the risers which you had already put in place. Removal for maintenance is also eased due to the design change. I for one would be more likely to clean it with as easy as it is to remove versus the older version.

Any way I look at the Hyper 212 Plus, I come up with nothing but good things to say. The redesign is a bit on the plain side, but the cooler shows real potential. For those willing to strap a couple of fans this cooler can start to pull into the premium cooler performance levels. While I won't say it's going to hit a specific temperature, with a 58 degree load temperature as the cooler is shipped, dual fans can drop results a few more degrees. Most e-tailers are under the $30 USD mark, plus shipping. Even if you have to add a couple $10 fans in the mix, you could get near premium cooler performance for near $30 less than say a TRUE or a Thor Hammer - both prices based on the assumption you are buying a fan to go along with it.

So if flash isn't your thing and you are more driven by results and potential, the Hyper 212 Plus may just be the cooler for you.