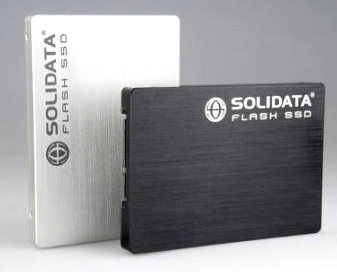 It is a little known fact that the Indilinx Barefoot controllers that we have been raving about for the last two months are capable of using Single Level Cell (SLC) flash memory. In the past we tested several SLC drives and were amazed at how fast the drives were compared to their MLC counterparts. Just as amazing were the prices associated with the SLC drives.

If you follow along with solid state drives then you know that the big call to fame for the Indilinx Barefoot has been its low cost, at least lower than the Intel controller. So what happens when we take the Barefoot and pair it with fast SLC memory ? Well, that is what we are here to find out.

We have reviewed a couple of products from Solidata already. The company keeps a fairly easy to follow product naming scheme; K1, K2 and so on. The drive we are testing today comes from the K5 series. If you are interested in an MLC Solidata drive with the Barefoot controller then you will need to wait for our review of the K6 drive that was provided to us by DVNation.

We have discussed the Indilinx Barefoot controller at length on the pages of TweakTown several times while reviewing a handful of MLC drives. The Solidata K5 uses the same high performance controller, but unlike the drives we have previously tested the K5 pairs the controller with Single Level Cell memory.

SLC memory has been proven to work faster than MLC; this is pretty common knowledge now, but what many people do not realize is that SLC memory lasts much longer than MLC memory. This has to do with the amount of times a cell can be written to and in an enterprise environment where several small bits of memory are written constantly, enterprise users will not want to worry about their write cycles and how many more years the drive has before it will need to be replaced.

Solid State Central lists the K5-64 that we are reviewing today at 808.00 AUD. They also stock the 128GB and 32GB drive with the 32GB variant coming in at 417.00 AUD. SSC also carries the RunCore Pro IV MLC Indilinx Barefoot drive (that we reviewed last month here) for 367.00 AUD for 64GB, so it is fair to say that the Solidata K5 drives with SLC flash are not for consumers looking for a low cost drive to throw in their notebook.

Let's take a look at the drive and see how it compares with the competition. 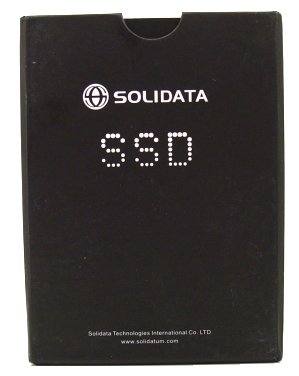 Solidata uses the same gift box for their 2.5 inch drives. The outer packaging is pretty attractive, but I doubt you will find these on a standard retail shelf at your local Fry's store. 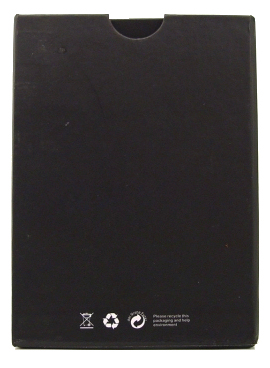 You are not going to find a list of specifications on the package anywhere.

On the side you will find a hand written note on which drive is inside the box. 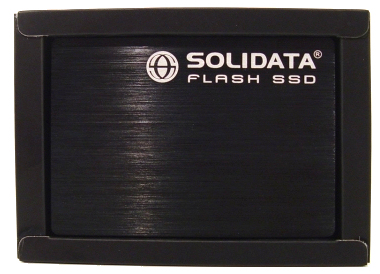 Inside of the box you will find the drive, but the box is void of extras like a manual or SATA cable. 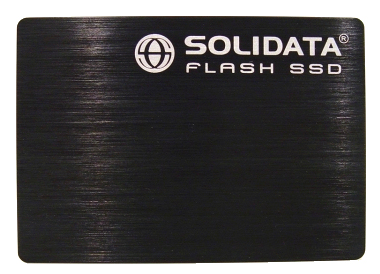 The drive has a brushed aluminum casing with a silk screened logo on the front. 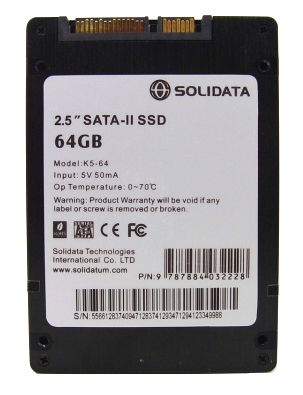 On the back you will find the model number, capacity and serial number information.

The Solidata K5 has all of the mounting locations where they should be, so you will not have a problem mounting the drives in drive sleds. 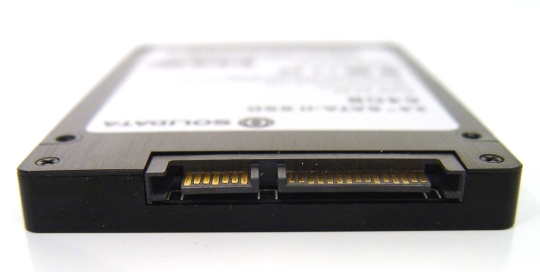 The power and data ports are where they should be. Let's get to the performance of this SLC Barefoot SSD.


Today we are comparing the Solidata K5 64GB SLC SSD to other 2.5 inch drives that we've reviewed in the past. 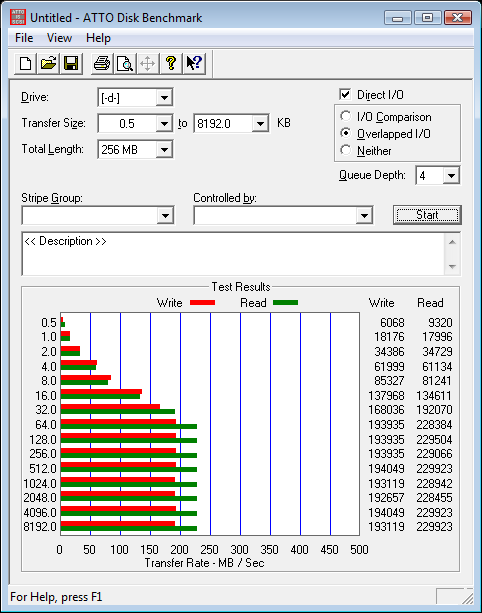 Here we see that under ideal conditions the K5 is capable of hitting nearly 230MB/s read and 193 MB/s write speeds. 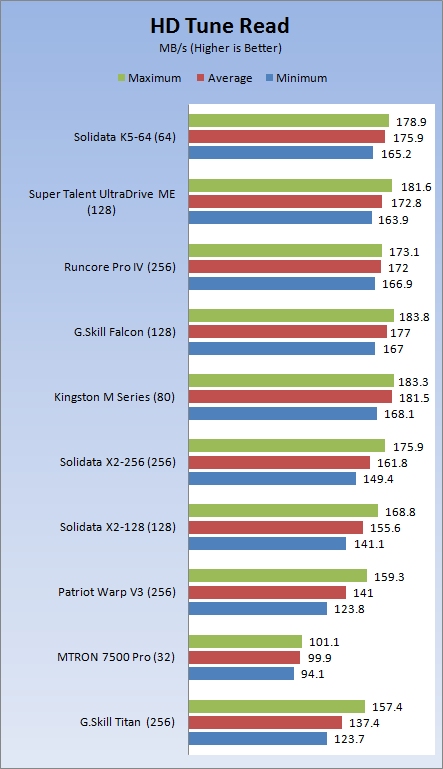 When it comes to read speeds the SLC Solidata drive runs nearly identical to the MLC Barefoot drives from Super Talent, RunCore and G.Skill. The Kingston/Intel MLC drive is just a little faster but the JMicron drives are quite a bit slower. 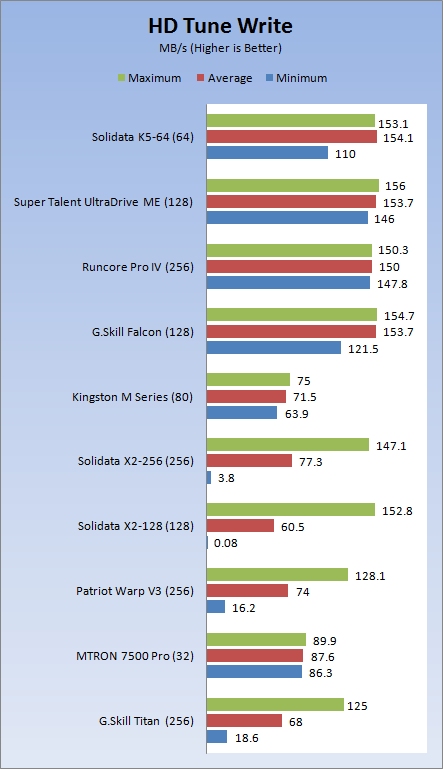 When we tested the G.Skill Falcon we noticed that there was a very small area where the drive would drop performance in every write test. This was later resolved with an updated firmware but it came after the review. The Solidata K5 also had a small dip in performance in the exact same location. This was like a reverse spike and once it passed the performance leveled off for the rest of the test.

When this occurs it is important to keep your eye on the prize, the average data transfer. SLC memory is normally much faster than MLC memory, but as you can see here the MLC and SLC Barefoot drives are running at exactly the same speeds. We will see what happens in the real world tests when these numbers are put to the test. 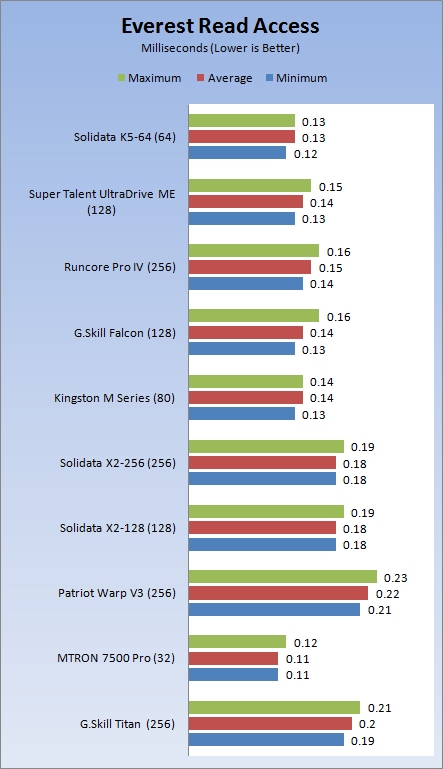 The average read access times of the Solidata K5 drive shows that it is able to access data .01 ms faster than the MLC Barefoot drives. 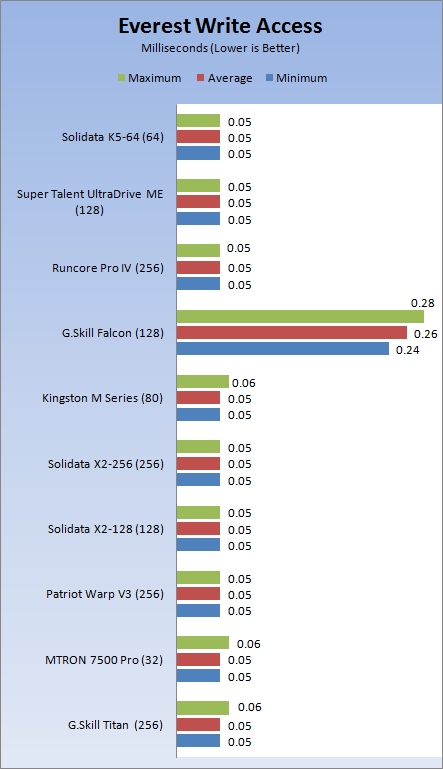 The write access times are spot on with the rest of the Barefoot drives.

Despite nearly identical synthetic performance numbers the K5 SLC memory drive was able to outperform the MLC Barefoot drives across the board. The K5 was also able to outperform the Kingston/Intel MLC drive in some of the tests, but lost ground in a few others. The older JMicron drives take a real beating from the newer drives. 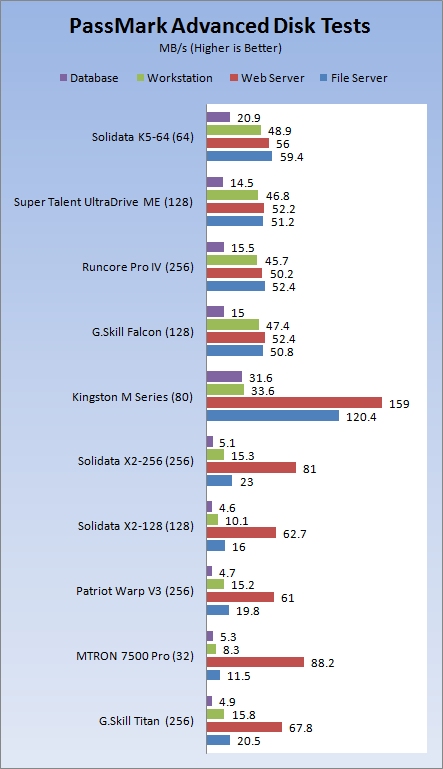 The Solidata K5 is designed for heavy database usage and here we see that the K5 was able to outperform the MLC Barefoot drives by a very large margin. The Intel drive once again plays the role of spoiler in these tests. Tit for tat the SLC memory in conjunction with Indilinx advanced wear leveling should last longer than the MLC drives in theory. We don't have 20 years to test this feature so we are just going to have to rely on engineers to tell us where the score cards will fall.

I hate to say it but I just can't get past the cost of the Solidata K5. Even as an enterprise product that is designed to outlast the consumer drives by years, I just can't budge on this issue. The dark horse in the room is the Intel X25-E (enterprise SLC variant of the X25-M consumer SSD). In the U.S. the X25-E is available from Newegg for 749 USD, a little over 100 USD more than the K5. Intel has kept a pretty tight grip on their enterprise drives so we have not been given the opportunity to test the X25-E, but judging from the numbers that are floating around it runs a little faster than the M Series drives. The Solidata K5 performs as well as the Intel X25-M in most tests, but is considerably slower in the Database tests we performed.

After testing the Solidata K5 I was left feeling a little underwhelmed by the performance. In the past we have seen the SLC drives produce numbers that justify their high cost in relation to the MLC drives that were introduced at the same time. The K5 did outperform the MLC drives with the same controller in all of the tests, but not by the same margin as the previous showings. That said, the K5 is very fast and we are looking forward to testing the Solidata K6 MLC Indilinx drive. 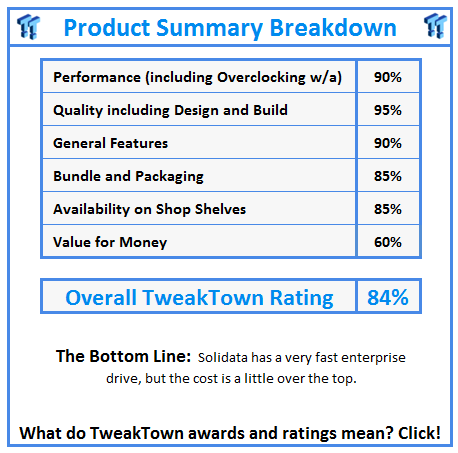