Thermaltake has been in the case game for quite a while now and I remember when the company first launched the Xaser series of cases. While not to everyone's liking, they did push the boundary with looks while also offering a pretty nice feature set at the same time.

Over the years we've seen more and more cases from Thermaltake and as someone who's a fan of cases that aren't all that loud, when it comes to the looks department the Element S from first glance looked like a nice case.

Today we'll check out exactly what the Element S offers us from Thermaltake and see if it can tickle our taste buds. Let's take a quick look at some of the accessories on offer from Thermaltake before we dive into the case itself.

Having a quick look at the accessories included in the package, we can see in the paperwork department there isn't a whole lot going on. Apart from the manual we've got a little warranty card that lets you know the do's and don'ts in regards to Thermaltake warranty. 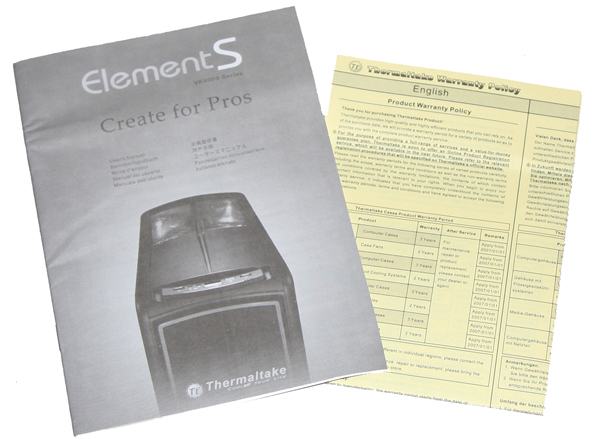 As usual we've also got a bunch of screws and what not that are needed to get everything installed into the case. Below you can see what's included, but the stand out point of the whole setup would be the fact that they've all been individually bagged. 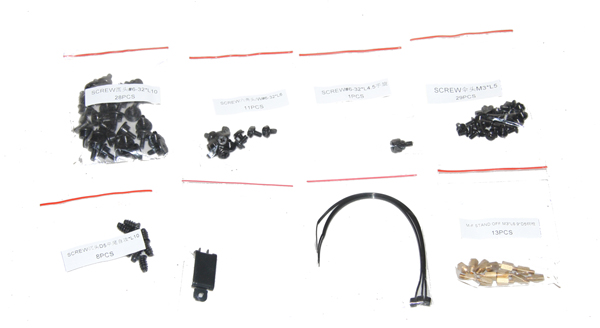 While it's not huge, what it does is make everything so much easier to work with. Instead of having to pour a bunch of screws into a box and fumble through them looking for the right ones, they're all seperated making the whole setup process a whole lot easier thanks to less fiddling around.

Taking the case out of the box, we can see that Thermaltake has placed a cover over the top so it's protected and doesn't get scratched during transportation or removal of the unit. Not only does it protect the case, but it also stores up a heap of static electricity thanks to the material, so when you finally grab the case for the first time you literally get quite the shock. 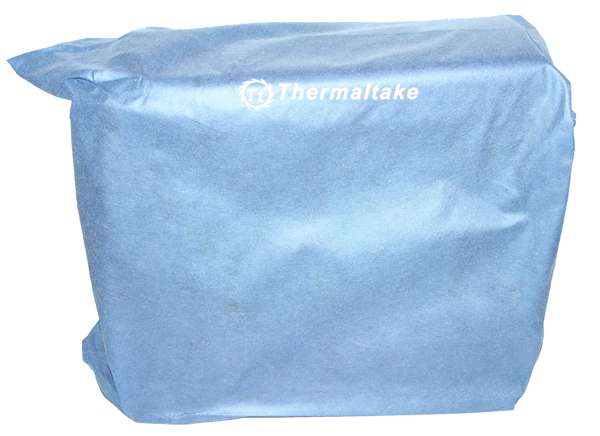 Pulling the cover off the case and looking at it for the first time, it really is quite a simple looking case; black as expected with a subtle bit of red down the front. The overall lines on the case aren't aggressive and there isn't anything really all that loud about the case; but if that's what you want in a case it's perfect. 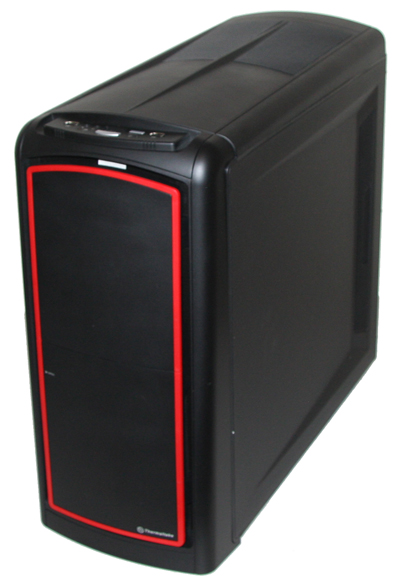 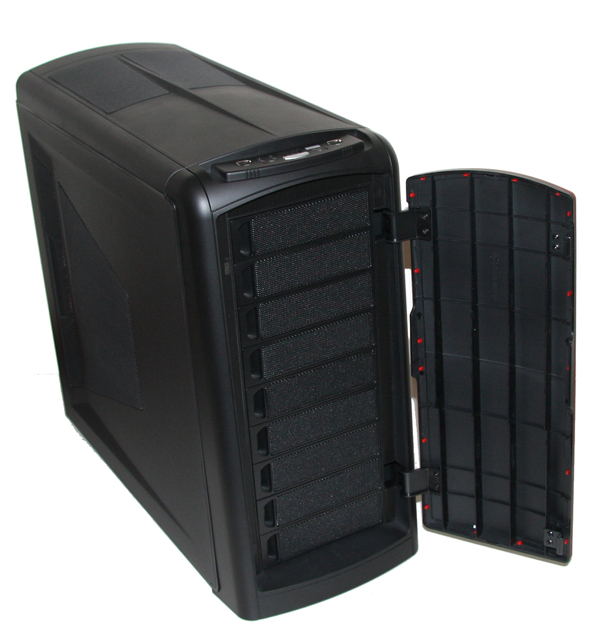 As for the front there isn't a heap going on; we have the Thermaltake logo printed quite small on the front of the case. The front is of course a door which when opened shows us a massive nine 5.25" bays that stretch from the top to the bottom of the case.

Looking at the top, we've got our power button smack back in the middle along with an e-SATA port sitting above it. To the right we have the reset button and the power LED. To the left there are microphone and headphone in and outputs along with a HDD activity LED. We also have a single USB 2.0 on each side of the whole setup. 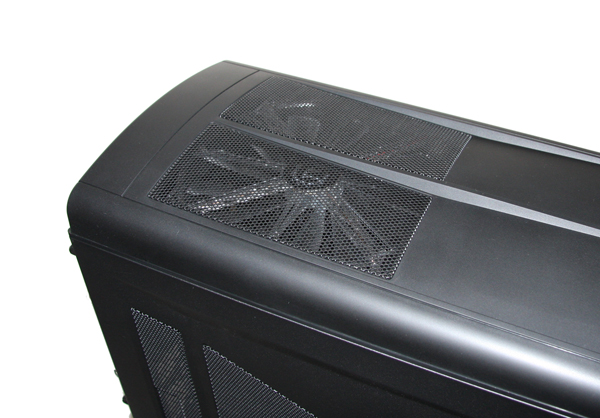 Continuing across the top of the case, we move to the back where we can see a large fan that helps push the hot air that rises inside straight out the top. The fan comes in at a large 23cm and spins at a pretty tame 600RPM which outputs an even tamer 15dBA. Thanks to the size, it doesn't need to spin fast to push serious air out the top of the case. 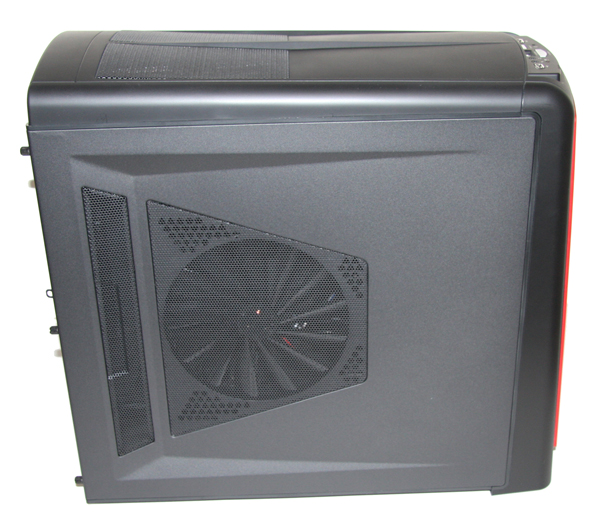 On the side of the case we see the same fan again, though this one spins at a slightly faster 800RPM while still out putting the same dBA. This fan blows directly over the core components of your system which include the graphics card(s), CPU and motherboard. 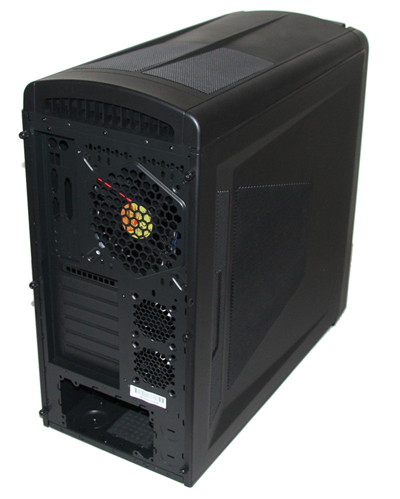 Finally we leave the outside of the case by checking out the back. We can see that like a lot of other companies Thermaltake has opted to have the PSU sit at the bottom of the case here. Moving up, we have a spot for two small 60mm fans; these aren't included in the package, though. Above that we have a 120mm fan that helps push the hot air out.

Taking the side panel off, we're greeted with an all black inside. This looks great but we tend to find that because it's more expensive to get the inside painted, it's not seen on cases that don't have a window. While you can't really see it from the outside, the all black inside is a nice touch and adds an extra bit of quality to the case.

At the bottom of the case we can see where the power supply will squeeze into and while a bit of a muck around getting a unit in place, there isn't really any dramas. Above here we can see where the motherboard sits. With my last few cases being full towers it does take a bit of time getting used to the smaller quarters a midi tower design offers, but again, with the install probably only having to be done once you shouldn't have any problems. 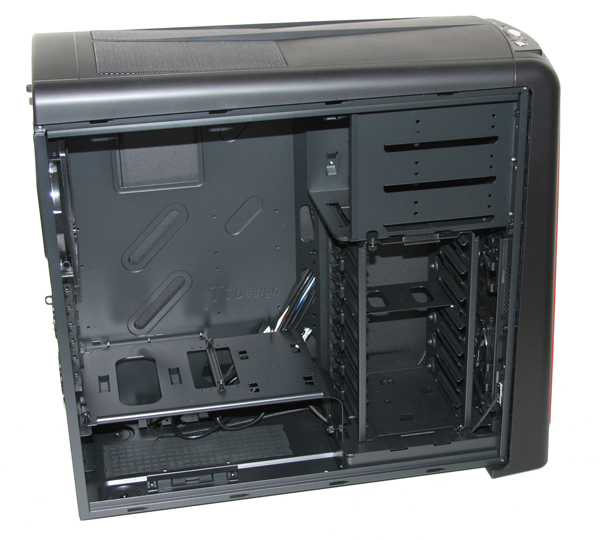 To the right we have all our bays for ROM drives and hard drives. Across the top we can fit in three 5.25" drives while across the bottom we can get a grand total of seven hard drives installed. 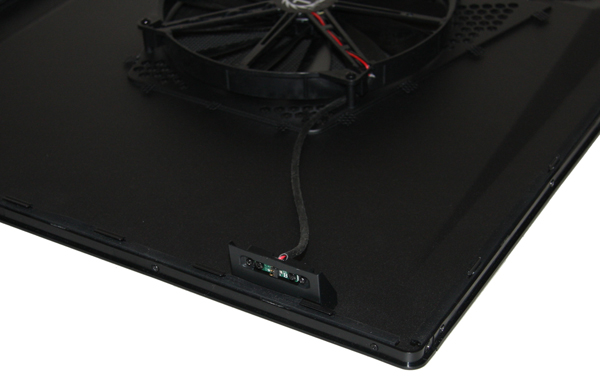 One of the coolest features on the case is actually on the side panel and it's not the fan. Instead of having to muck around trying to get a molex connector into the fan and then have a cable running across the middle of your neat setup, there's a little connector on the side of the panel. When you close the panel it hooks up with the other part and provides power to the fan. While something quite simple, it can make a big difference to the overall neatness of your cable management.

As mentioned, being someone who is used to working in full towers, the mid tower based Element S does feel like a bit of a squeeze at first. It doesn't take long to get into the swing of things, though, and the whole setup of a PC doesn't take too long.

From a feature perspective the Element S from Thermaltake really offers everything you need. Whether or not you'll buy the case will come down to two things, the first being if you're happy with a midi tower. Standing at 505mm it's not a small case, but it doesn't offer the room that a full tower does.

The second will be the look; this is something that is going to completely depend on the person. The red LED fan at the top isn't in your face and helps add a bit of color to the case. Black and red as a theme is something that can't really go wrong and if you're happy with the more plain look that the Element S offers here it might just be the case for you.

While lacking some of the flair that we quite often see in a lot of Thermaltake cases, the Element S is a nice breath of fresh air for people who like the brand but don't want all the bells and whistles that we see in other models from the company.

The only real downfall to the case would have to be the lack of full tower version for people who like the model but want the extra breathing room a larger tower offers. All in all the Element S at $119.99 over at Newegg is a pretty nice looking case that doesn't hit the wallet too hard. Pair it up with a nice power supply and a good little Core 2 or i7 system and you're going to end up with something that looks subtle but manages to pack quite the punch. 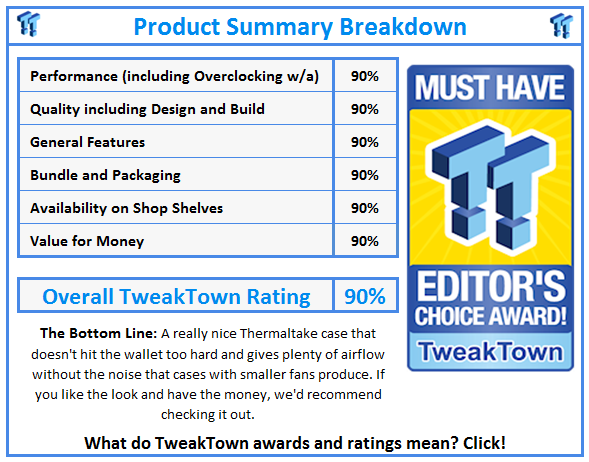