When Spock (Leonard Nimoy) encourages Dr. McCoy (DeForrest Kelly) to "remember", transferring Spocks spirit to him, neither can be at peace until Spocks body can be found, which necessitates commandeering the Enterprise. But when his body is located on the highly unstable Genesis planet, a battle awaits with the Klingons who wish to weaponise its immense power.

Directed with skill and obvious talented actor, Leonard Nimoy, The Search for Spock holds up relatively well, 25 years later. Whilst not held in the same regard as its predecessor, it seems to command a little more respect than it did upon release.

Star Trek: The Search for Spock is presented in the widescreen aspect ratio of 2.35:1, encoded with the AVC codec.

Whilst restoration work has quite obviously been performed on this title, it hasn't had the five star treatment that The Wrath of Khan has had. That said, this is still a very pleasing transfer. Film artifacts are mostly constrained to optical effects. Minor colour timing has restored colour to original opacity. Detail is very sharp and retains a very 'film-like' look.

A pleasing new master has been struck, it just doesn't quite reach the heights of The Wrath of Khan's remaster.

The Search for Spock was the first Star Trek movie to be released originally with 6 track audio. It's quite an aggressive mix, so I can only assume that further work was performed in remixing.

I noticed no problems with audio sync. Surround usage, as noted is fairly aggressive during battle scenes, but disappointingly a little more restrained in other scenes. The subwoofer springs to life when needed.

James Horner returns to score the film and whilst not as memorable as the previous entry, is still quite good and mixed well into surrounds.

Overall, a fairly good effort and probably the best we will ever hear it.

The first of the two Audio commentaries is provided by Director / actor Leonard Nimoy, Writer / producer Harve Bennett, Director of Photography Charles Correll and actress Robin Curtis, which is bought over from the previous DVD release. Nimoy speaks enthusiastically about the film making process and imparts some interesting stories. The other commentators have their recollections edited between Nimoy's commentary. The second commentary is a new track, newly produced, featuring Ronald D. Moore and Michael Taylor. Whilst both had no involvement with this film, as producer and writer for further Star Trek series, they offer their thoughts on the film and how it affected their work.

Next up we have quite a healthy collection of newly produced Featurettes: 'Industrial Light & Magic: The Visual Effects of Star Trek, a fairly considerable look at the visual effects production and penny pinching over the series, 'Star Trek and the Science Fiction Museum and Hall of Fame, is an extremely brief look at a collection of props on display at the museum, with Producer Harve Bennett acting as a guide whom tells us a few new stories, 'Spock: The Early Years', a short interview with Stephen Manley who played Spock aged 17 years old and finally 'Starfleet Academy: The Mystery Behind The Vulcan Katra Transfer', a continuation of the info-mercial series.

Continuing the featurette collection are a few relics from the previous DVD release are 'Captain's Log', which takes the tone of a brief making of documentary, with recent'ish (and terribly shot) cast and crew interviews, 'Terraforming and the Prime Directive' which looks at possible scenarios for human colonization of other planets, Space Docks and Birds of Prey looks at the creation of the Klingon battleships and the evolution of the model work, Klingon and Vulcan costumes is a brief look at the costumes for not only the Klingons, but other designs as well. Speaking Klingon is quite a lengthy and unfortunately dry interview with Mark Okrand, who created the Klingon language. I am sure hardcore fans will enjoy this one, though.

Lastly, we have the original Theatrical Trailer, presented in HD. I particularly enjoyed the voice over: "Join us on this, the final voyage of the Starship Enterprise!" 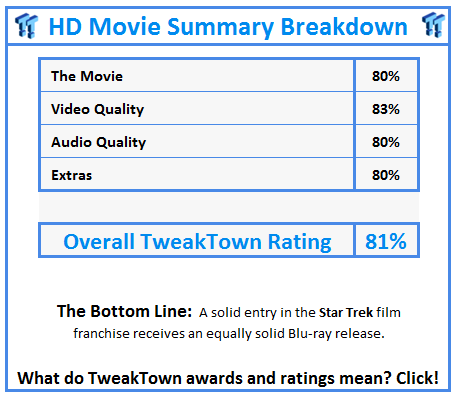