When the U.S.S Reliant is hijacked by banished super villain Khan Noonien Singh (Ricardo Montalban reprising his role from the 'Space Seed' episode of The Original Series) and set on a course to destroy the U.S.S. Enterprise, Captain Kirk (William Shatner) must band together the crew, both new and old, to thwart his plans. However, when tragedy befalls the crew, the need for Kirks revenge threatens to outweigh the needs of survival for himself and his crew.

Series newcomer Nicholas Meyer takes charge of the directorial reigns, in what most Trekkers consider to be the strongest entry in the Star Trek film franchise. With a brilliant villain, a heightened emotional pull and more action than its predecessor, I would agree with popular opinion. However, despite the return of a villain from The Original Series and being a sequel to a well established franchise, Wrath of Khan remains the friendliest entry to casual fans.

Of note is that again, Paramount have failed to reproduce the slightly longer directors cut of the film, instead presenting the original theatrical cut. The director's cut can, annoyingly, be purchased in the DVD boxset.

Star Trek: The Wrath Of Khan is presented in the widescreen aspect ratio of 2.35:1, encoded with the AVC codec.

Out of all the films in the Star Trek Blu-ray boxset, Khan has had the most restoration work - at the hands of DTS Digital Images, formally known as Lowry Digital. DTS consistently produce wonderful transfers from problematic, decaying material and this is no exception. The Wrath of Khan looks sharp as a tack, with a very fine amount of detail to every surface and object. Film artifacts are fleeting for live action material, but more pronounced in the baked-in composited effects shots. Some colour correction has been undertaken, which eliminates a hazy brown look to the film which crept in with age.

An extremely pleasing restoration, fans will be very impressed.

Similar to The Motion Picture, Wrath Of Khan was originally released theatrically in Dolby stereo and remixed in 5.1 for the DVD release in 2001, the new Blu-ray release has gone back to the 5.1 mix and extrapolated it a little more.

With a stronger surround presence than The Motion Picture, with the films score by James Horner receiving particular aural attention, my only real criticism would be the quality of some of the dialogue which sounds at times poorly recorded, but more a factor of the films age and original recording methods than any fault of the transfer.

Overall, a pleasing effort from Paramount and a presentation which will please franchise fans and casual alike.

The first of the two Audio commentaries is provided by Director Nicholas Meyer, which is bought over from the previous DVD release. He is honest about his lack of previous Trek knowledge, which doesn't seem to have mattered one iota in hindsight. The second is a new track, again with Nicholas Meyer, but this time with Manny Coto, who has become a Star Trek writer and sometime producer. This seems to have been recorded more recently. There is a little overlap between the two commentaries, but overall I preferred the second commentary.

Next up we have quite a healthy collection of newly produced Featurettes: 'James Horner: Composing Genesis', is an interview with the composer who was at the time a Trek newcomer and his recollections of creating an entirely new score with little reliance for what came before it. 'Collecting Star Trek's Movie Relics, is an extremely brief look at a collection of props which were used in various Star Trek movies and series, 'Starfleet Academy: The Mystery Behind Ceti Alpha VI', a continuation of the info-mercial series.

Continuing the featurette collection are the relics from the DVD release 'Captain's Log', which takes the tone of a brief making of documentary, with recent'ish cast and crew interviews, 'Designing Khan' plays as a nice continuation of the previous featurette, but looking more specifically at wardrobe and weapons, 'Where No Man Has Gone Before: The Visual Effects of Star Trek II: The Wrath of Khan', a dissection on the films tricks in an era when CG was just coming along and tight budgets meant creative thinking and finally 'The Star Trek Universe: A Novel Approach', a slightly strange inclusion that does little to change the stigma of being a Star Trek nerd. The difference is these ones get paid to write about their passion.

The collection of Original Interviews is a compilation of cuts from the original press reel. Shatner comes off as a slightly sexist buffoon.

Lastly, we have the original Theatrical Trailer, presented in HD, as proof that revealing far too much of a movie in a trailer isn't a recent problem. 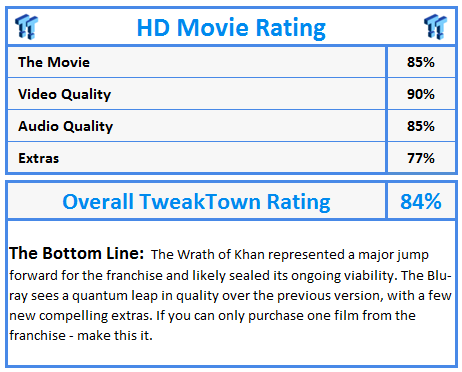