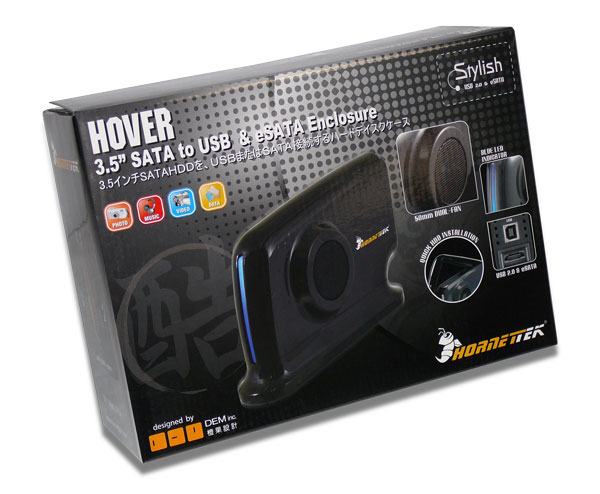 Life has to be tough for external disk makers. My local Fry's Electronics store literally has an entire row of external enclosures, many of them with the same features and all priced within a few Dollars of each other. The connectivity of each unit is usually eSATA, USB and FireWire or a combination with two of the three. How is a company able to distinguish themselves from the herd?

HornetTek was a new company to me just a couple of weeks ago, but their Hover external enclosure has quickly grown on me. HornetTek was able to come up with a product that breaks the traditional square box mold with a stylish enclosure that looks as well as it performs.

HornetTek worked very hard to break the traditional mold of external enclosures in more ways than one. The cost of the enclosure is much less than several competing products. Just how low is the price on the HornetTek Hover? - Read on to find out.

The HornetTek Hover is available in black, blue and yellow, orange, red and white. Our sample actually arrived in a very cool silver color. According to HornetTek's website there are two additional options available; USB only and USB + eSATA. Our sample was the USB + eSATA version, the one that I feel most of our enthusiast readers would prefer.

When it comes to operations system compatibility, the Hover covers all of the bases. Linux, Mac and Windows support going back to 98SE is provided, so you shouldn't have an issue bouncing your drive from one system to another.

The stand out feature of the Hover is the dual 50mm fans that cool your hard drive silently from both the top and bottom of the drive. Large hard drives and drives with high spindle speeds tend to run a lot hotter than traditional drives and when using an external drive you most likely will want to use a large capacity hard drive. Many large capacity drives use five platters; this is what causes them to run hotter. It is good to know that the Hover is able to cool these drives down and do it silently.

When it comes to price I was able to find the Hover for around 35 Dollars U.S. from GoHardDrive.com and with a 1TB Samsung drive from PerformancePCs.com for 129.95.Both show strong price points for this market and I am sure once HornetTek is able to make more headway into the U.S. market we will see their products offered at e-tailers. 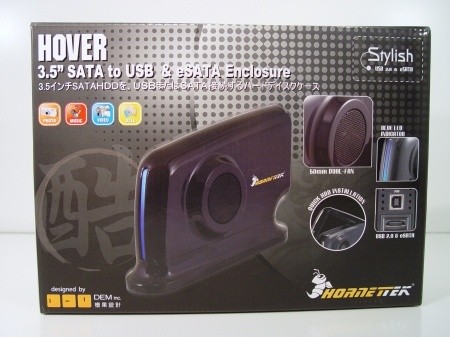 HornetTek has done a very good job with getting the information about the product listed on the front of the package. Here we can see that many of the features are shown right on the front with nice clear pictures. 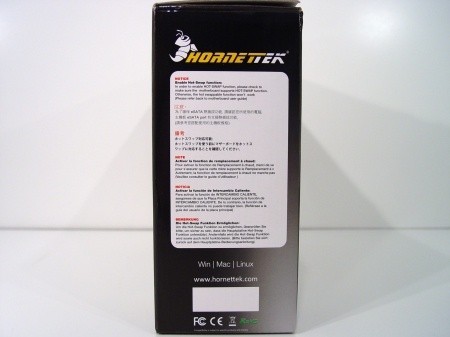 The side of the package shows the warning about hotswapping the enclosure and that some motherboards are not able to perform this function. Most motherboards made in the last two years are able to do this, so that isn't a big deal for enthusiasts. As always, your mileage may vary so be sure to check your motherboards specifications. 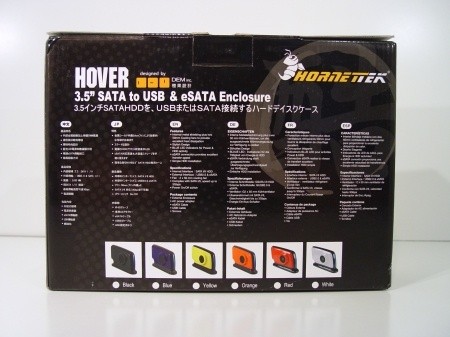 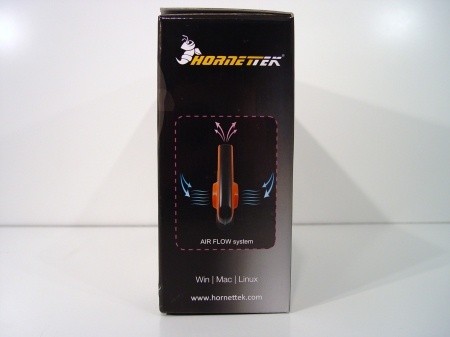 The cooling system is shown on this side of the box. Here we see that fresh, cool air is brought in from the sides and expelled through the back of the enclosure. 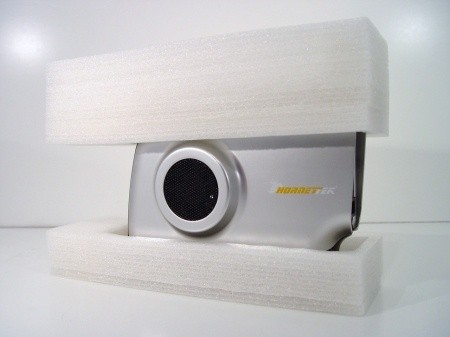 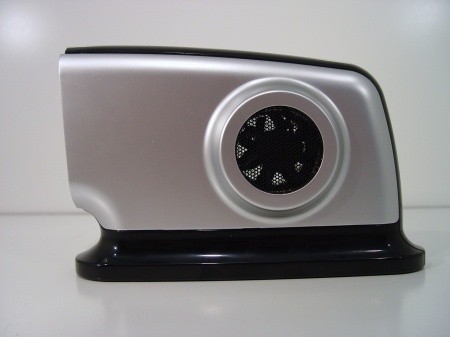 Our first look at the HornetTek Hover from the side shows the 50mm fan and the base of the unit. The enclosure is very stable with the base keeping the enclosure upright. 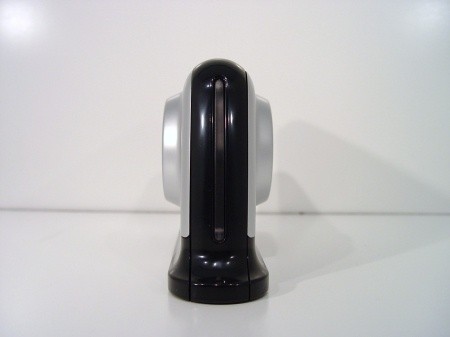 On the front side we see that the Hover is a little wider than most enclosures, but this also adds to stability. Also, the strip running down the middle of the Hover is a light bar that glows blue when powered on. 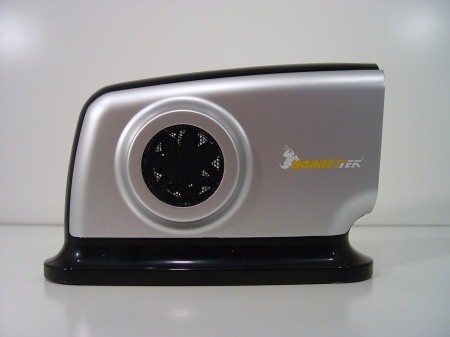 The other side is nearly identical to the first; we see some additional product branding here that was not on the left side. 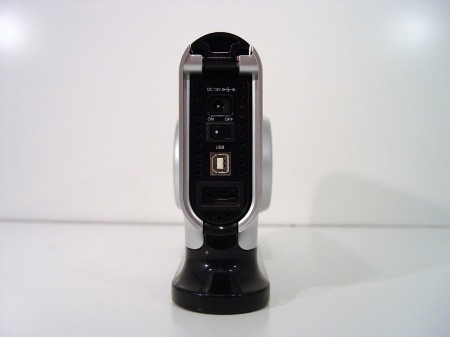 On the back is where the action is located. Here we see connectors for power, eSATA and USB as well as a power switch. I would have rather seen a power switch on the front of the drive where it would be a little easier to access. 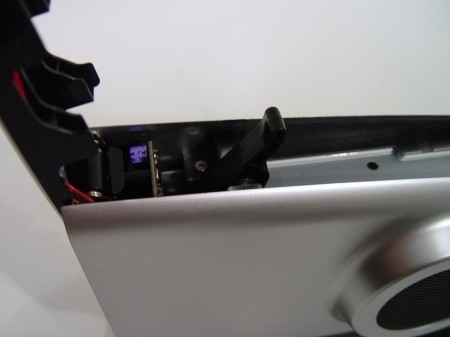 The top cover is held closed with a single #2 Philips screw, once it is removed you can easily access the enclosures internals. Here we see the mechanism that allows you to easily review the drive from the enclosure. 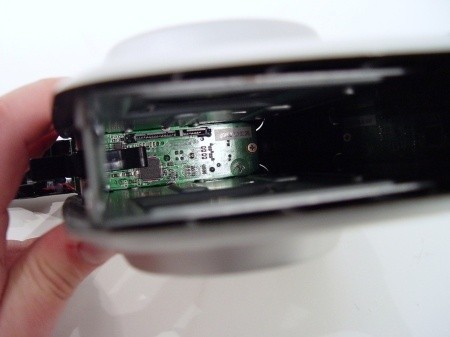 Looking down the barrel, we see the SATA power and data connectors as well as the other side of the extraction mechanism. 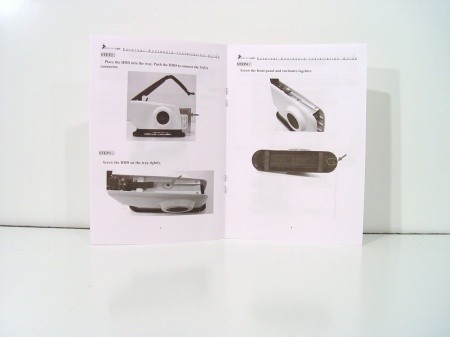 The manual for the HornetTek Hover was written very well and walks the user through installation as well as setup of the unit. 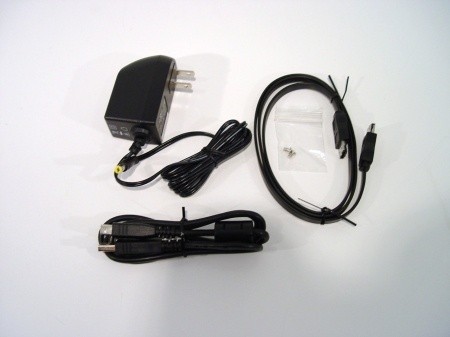 The Hover comes with both a USB and eSATA cable. There are a few products on the market that do not come with these and each will cost you around 20 Dollars if purchased at a retail store.


Today we are comparing the HornetTek Hover HDD Enclosure with other 3.5 inch drive enclosures that we reviewed in the past. 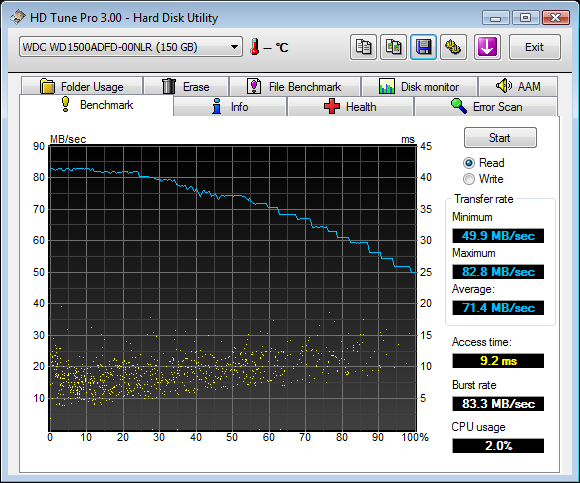 eSATA adds electronics to the data path, so it is important to test the transfer rate to verify that the additional electronics do not slow the transfer speeds down. Here we see our Western Digital 150GB Raptor used in the HotnetTek Hover in eSATA mode. The speed is nearly identical to what we see with the drive connected to the motherboard directly. 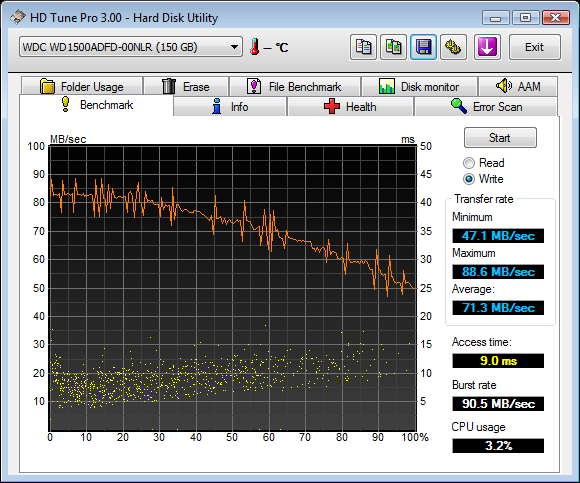 Write transfer speeds give us the exact same results with eSATA. The drive performs identical to how it would when attached directly to the motherboard.

HornetTek was able to make an external disk enclosure that stands out from the crowd in this saturated market. The best thing is they were able to do it while keeping the price low. The only area that I can see that has a negative is availability since only a few etailers currently stock the Hover.

The design of the Hover is fairly unique with its twin 50mm fans that cool both sides of the hard drive. We have seen many active cooled enclosures over the years, but the Hover uses a fresh design to achieve better results. The Hover is built solid, cools very well and does all of this while remaining silent in an average computer environment.

In a market where many products are priced around 50 USD, the Hover is a bargain at under 40. The only real cause for concern at this point is the availability. In time the Hover should glide its way into more retail and etail locations, making it more accessible to our global audience.

The performance of the HornetTek Hover was spot on for where it should be. A few eSATA products we have tested have limited the performance of the drive being used, but that is not the case with the Hover. The electronics are spot on and the enclosure was able to act as a hot swap in our test systems without issue. If you are still using normal USB 2.0 for your external data the Hover has that covered as well, giving the user maximum flexibility to swap drives between systems. 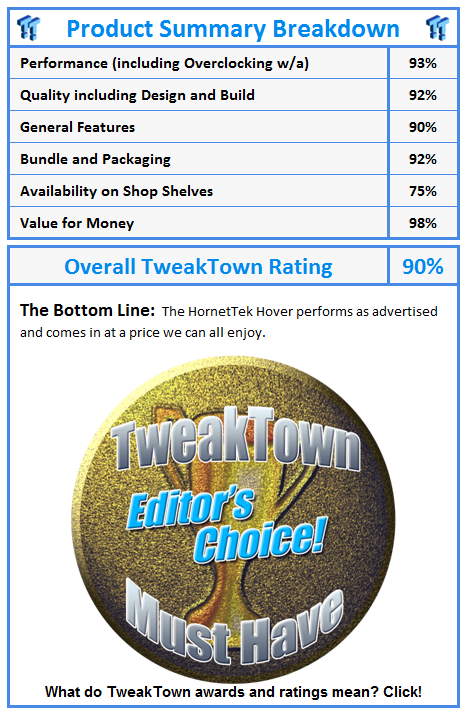