Core i7 has now established itself as the high end processor to aspire to, while AMD has little to challenge it with so far. This means that boards and memory kits will be coming out to suit this new processing monster.

So far we have looked at a few DDR3 triple channel kits designed to take full advantage of the extreme speeds that Core i7 is able to produce, but one thing Intel has made very tricky with Core i7 is its memory voltage requirements.

Today CSX claims to have made it possible to run this memory at 2000MHz on the Core i7 with only 1.65v fed to them. Let's see what they have in store for us. 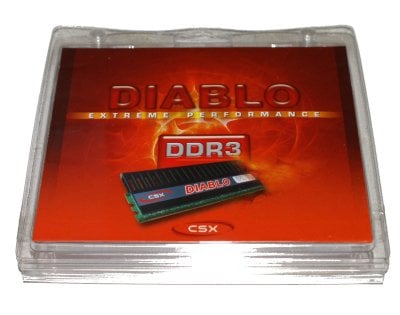 First off, CSX packages its modules in a plastic blister that is extremely easy to open and doesn't require any knives or blades; CSX, my hands thank you! - Each module comes in one of these packages and they all fit together to make a triple channel kit that looks modular, making it easier for CSX to sell them as single, dual or triple channel kits. 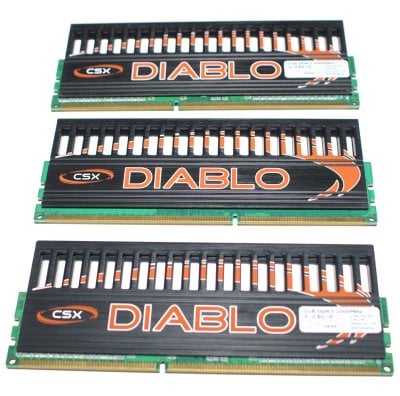 Upon removing the modules from the blister back, we get our first good look at the modules themselves. First off, the design of them is oversized; the heatspreader that the DIABLO uses is alloy in construction and sits above the modules to increase the surface area, allowing for a much better cooling setup. 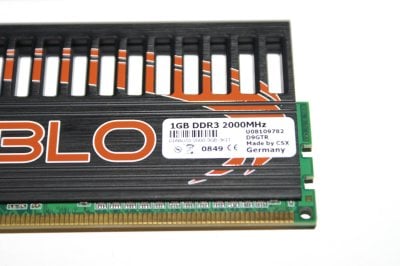 On one side of each module CSX has placed a sticker with some basic information on the modules. Unfortunately there is no detailed info on the timings or voltages and you need to go to the Compustocx website to get any meaningful data. But rather than making you go and look for the data, we sifted through the information and found the modules are rated for CL9 at 1333MHz using the JEDEC standard. Using Intel's XMP profiling, the modules run 7-7-7-24 when at 16000MHz at 1.6v and 8-8-8-26 at 2000MHz using the full 1.65v. This is extremely impressive, if it will in fact do those speeds. Let's now find out!

When it comes to overclocking, we aren't expecting there to be any with these modules. Now, before we crush any hopes, let me explain. While 2000MHz isn't actually recognised by JEDEC or Intel at this time as an official speed, the modules come out of the factory rated for this speed and that's exactly what we achieved with them during our testing.

However, trying to go past 2000MHz resulted in Windows locking up and we weren't going to put any more voltage into the memory to test; we do try to care for our donated hardware that is used on the test bed. But a fully tested and stable result of the rated 2000 MHz speed (which is the highest we have seen any triple channel memory kit operate at thus far) is quite an achievement. But performance like this comes at a price.


Today we throw the 2000MHz CSX memory against the A-DATA 3GB kit that we recently reviewed. This gives us a pretty good idea on a MB for MB rate as to how these very different kits perform.

At stock speeds the A-DATA memory and the CSX manage the same speeds, but when we start to increase the speed the A-DATA falls behind, especially since it can't make the 1600MHz or 2000MHz mark.

Using Sandra we get the same conclusions we saw with EVEREST.

Latency and access times win it here; CSX managed to win at the higher clock speeds as it still manages to keep its timings quite low in comparison.

Moving to real world gaming, at 1333MHz both kits are near identical while at 1600MHz we don't see much of a difference either. However, when at 2000MHz the CPU clock and BCLK is increased and this will be the main reason for the CSX extending the lead here.

Core i7 hasn't taken off with massive sales, but given its performance profile it won't be far off before a bigger portion of the enthusiast crowd choose to embrace it. But then there's the financial crisis against its success in this regard as well; something very few people have control of at the moment.

That said, CSX has done a very impressive job with its 2000MHz triple channel kit and is deserving of attention from those looking for top end modules. But while fast, this speed comes at a price premium. As you would expect, DDR3 still sells at a higher cost than the same sized DDR2 modules. And with three of them in the kit, it's going to cost a bit to get these high clocked modules into your rig, that is if you can even find them. 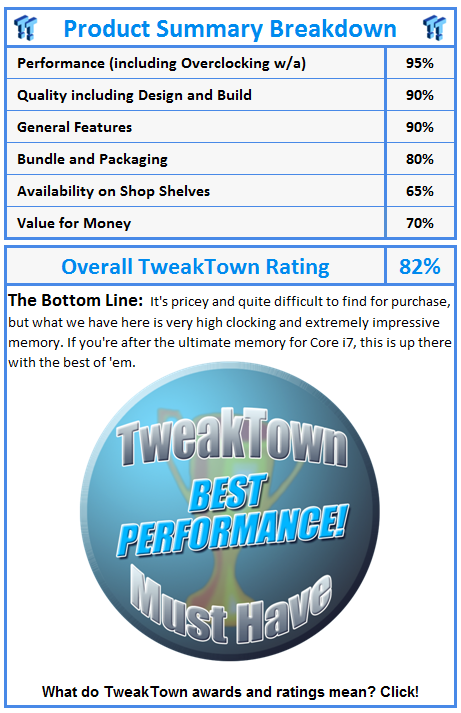