The SSD market is on fire, burning faster than even the most optimistic analysts could have predicted. G.Skill has played a large role in the solid state transition with their above average products at below average costs. Not only that, but we are really starting to see SSDs become user friendly as far as capacity goes. Last year we were talking about 32GB SSDs and how the speed was very impressive, but the capacity left room for doubt. Here we are a year later and we are already seeing close to a 10x increase in capacity for drives costing the same as the 32GB drives last year.

In G.Skill's latest SSD, capacity will have to just be a footnote in the overall scheme of things. The real story sits with the technology and what the company was able to do with JMicron's somewhat problematic controller. In essence, G.Skill was able to use two JMicron controllers with two separate banks of memory that work in tandem to reduce or eliminate the issues associated with writing multiple small files to the drive. I have seen the term RAID used a few times in other reviews and while the concept seems similar, it is not the case.

Today we are going to take a deep look at the new G.Skill TITAN FM-25S2S-256GBT1 drive with dual JMicron controllers working together to give you 256GB of storage capacity and at a claimed maximum of 200 MB/s read, 160 MB/s write. Let's dive right in.

G.Skill's latest TITAN series is compromised of two drives at this time, the 128GB model and the 256GB that we are looking at today. This is G.Skill's first offering at the 256GB capacity mark and a benchmark in which many would-be-buyers have been waiting for.

The drives rated speed is 200 MB/s read and 160 MB/s write and to go ahead and let the cat out of the bag early, we were able to achieve the rated numbers in ATTO, a benchmark that is ran on every drive we test, but rarely ever published. These speeds put the drive right up there with the Intel X-25M drive which also uses MLC NAND flash memory.

The biggest drawback for the X-25M has always been price with a dash of capacity envy. G.Skill was able to beat Intel on both fronts with the TITAN series, especially capacity. The G.Skill TITAN 128GB is already available at Newegg for 299 USD and the 256GB is priced at 494.99. Both may be priced a little higher than what most users are prepared to spend on a hard drive; we will look take a closer look at this issue in the conclusion.

As for competition, there are not too many players willing to enter the 256GB market at this time. Newegg lists two drives at 256GB and two at 250GB with the Super Talent OX Series (rated 150 MB/s Read and 100 MB/s Write) coming in just a hair cheaper than the TITAN. The two 250 GB drives are from OCZ Technology and start out at 645 USD, so they are not even competition for the TITAN.

Packaging for the TITAN is very similar to the FM-25S2-128GB we looked at just a few short months ago. As you can see, the TITAN logo has been added since then, but performance numbers are still not there.

The back of the box lists several of the specifications, but you have to look at the sticker on the bottom right hand corner to find performance numbers.

The overall package is very compact as you can see in this image looking down on the box.

Even with the small size of the package, G.Skill has done an excellent job of protecting the drive. This is the same hard foam package we found on the FM-25S2-128GB and one of the better solutions being used to protect SSDs.

It is getting to be one of those "If you have seen one SSD, you have seen them all" deals, at least on the outside. Even with that in mind, just seeing an SSD with a big 256 across it gets us excited.

The back of the drive is pretty typical as well. This is where G.Skill places the serial number and compliance logos.

The business end of the drive shows us that the power and SATA data connector is the correct place. Notice that the TITAN drives do not have mini USB ports, a feature that can come in handy, but has little real world value since USB is still far too slow to utilize the awesome transfer rates that are provided by solid state drives.

On the side we see that the drive has the two holes needed to mount the TITAN.


Today we are comparing the G.Skill TITAN MLC SSD to several other 2.5-inch drives that are either widely used in the industry or previously reviewed here at TweakTown.

Intel X25-M: The defacto king of 2.5 inch MLC technology. Sitting at the top of the hill comes with a high cost of ownership and being limited to 80GB for 550 USD is enough to make even the wealthiest enthusiast cringe.

Patriot Warp V2: The second revision of the Warp Series was a speed demon and set a new price point for 128GB SSD's to aim for.

Crucial CT32GBFAB0: The Crucial SLC SSD is one of the early technology solid state drives and will provide a great example of just how far solid state has progressed.

G.Skill FS-25S2-64GB: This SLC drive from G.Skill is a rebadged Samsung drive that G.Skill was able to price much lower than Samsung's drive. The FS-25S2-64GB is the SLC drive others aspire to be.

Hitachi 7K100: The 7K100 is a 100GB notebook hard drive that was used by several notebook manufacturers. This is the drive that came with my Lenovo T60.

Hitachi 7K500: The 7K500 is the first 500GB notebook drive to hit the market. Unfortunately the drive is 12 millimeters tall and can only be used in a small number of notebooks. A standard notebook drive is only 9.5mm tall.

In our sustained transfer read test we see that the G.Skill is right on Intel's heels, but is not able to overcome Intel's advanced ten channel controller. Still, the TITAN is faster than the previous generations of MLC drives with ease.

The write tests are what everyone seems to be the most interested in these days now that MLC drives are starting to catch up to the SLC drives. Here we see the TITAN reaching a maximum write speed of 125 MB/s, a great deal faster than the X25-M. All of the MLC drives suffer from low minimum speeds, but the TITAN was able to reduce the number of low points which left the drive with a very good average write speed.

When it comes to access time, every hundredth of a millisecond counts. I expected the TITAN's new dual channel controller to raise the access times, but that was not the case. The TITAN did trail the X25-M, but not by a large margin.

Write Access Latency was a little different; the TITAN was able to best the X25-M by half of the access time.

This is where things started to get tricky. The Windows Photo Gallery test, a high read speed test of smaller files has the TITAN outperforming the Intel drive by a small margin. The rest of the tests show that the Intel drive is quite a bit faster. It is important to remember this high capacity penalty for the X25-M though.

Our workstation and server tests show the TITAN improving over the previous generation MLC drives in many of the tests, but this one has the Intel drive out in front again. When it came to the web server test, the new dual controller configuration showed its might.

Solid state drives are still not for everyone. Two thirds of the requirements have now been met, speed and capacity. As of right now the cost is still holding many back, at least in the notebook user category. Desktop users are most likely holding off for the first 512GB SSDs and that is acceptable. When the drives are finally released in this capacity at a 300 Dollar price point, I think we will see more desktop users take the plunge to solid state.

The G.Skill TITAN is currently all around best bang for the big buck drive for enthusiasts looking to have their cake and eat it too. It sounds like an oxymoron, but the truth is that enthusiasts have standards that are stronger than morals. Certainly a 32 and 64GB boot drive is unacceptable; 128 is right on the time and 256 is absolute nirvana, at least in early 2009.

As mentioned earlier, the 256GB TITAN comes in at 494.99 USD. At nearly 500 Dollars, it is quite a hit, but you are buying 256GB of very fast nirvana for that amount. Comparing the TITAN to the competitions 650 Dollar solution really hammers home the bang for the buck statement. Stick to your declarations and don't settle for a drive that will not provide you with the capacity you know will be needed. The G.Skill TITAN will provide you with everything you are asking for as far as capacity goes and at a price that is getting easier to swallow. 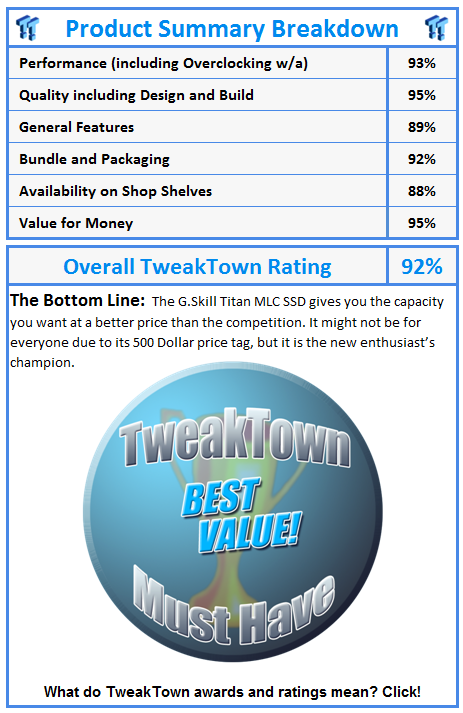