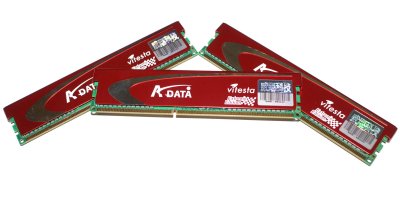 It's true that Intel has put a lot of hope into DDR3; it's Intel's second push with memory companies to get a new technology into the market place. DDR2 was their biggest push and it turned out a huge success along with Intel's extensive range of DDR2 chipsets. Further to that, AMD adopted it when they clearly said there was no need for it on the AMD K8 architecture. How quickly companies change their minds.

DDR3 has been around since the introduction of the P35 chipset and the Core 2 processors. The main reason it hasn't taken off when compared to DDR2 is a two-fold problem. Firstly, the yields; it has taken until now to get high clocking memory that is able to clearly outperform DDR2. On a clock-for-clock basis DDR2 is able to beat DDR3 in certain tests that rely on low latencies. The other problem is price. Compared to its replacement, DDR3 is quite a bit more costly and you can now easily get 4GB of DDR2 for around $100 AUD. But when it comes to DDR3, you're looking closer to $200 AUD; this is because of demand and lower yields.

While Intel was pushing for DDR3 as the memory of choice, their P35, P45, X38 and X48 didn't really help them as they had DDR2 memory controllers as well as DDR3, allowing the motherboard makers to choose. This keeps DDR3 on the backburners, but with Core i7 this has changed. Thanks to the on-chip memory controller, Intel is limited to a single type of memory and this is where Intel is pushing DDR3. If you want to use any of the current Core i7's or the upcoming LGA-1156 processors due next year, it's DDR3 or nothing. And with the LGA-1366 supporting three memory channels, we are seeing triple channel kits coming out for Core i7.

We have already tested the Corsair memory which was our memory of choice for our Core i7 CPU review. Today we look at A-DATA's Vitesta Triple Channel kit, rated for 1333MHz. How does it stack up? Let's find out. 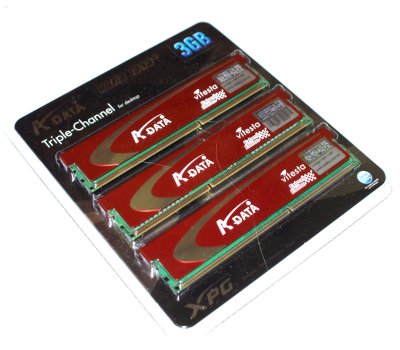 Compared to our Corsair kit we received last week, the A-DATA Vitesta kit was a full retail offering, so we were given the kit to evaluate which included the package that you will see in your local PC shops.

A-DATA has put the modules in one of the protective blisters that I like to call the 'hand shredder'; this requires you to use a stanley or razor blade to cut them out and usually I either put the blade into my hand, pushing too hard to cut the blister pack or end up not cutting enough to get through and then trying to rip it open which once again subjected my fingers to the full force of opening the package.

Through the front of the package A-DATA gives you a full view of the three memory modules. 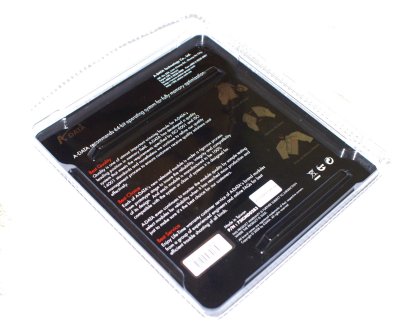 Since the front had a plastic blister that allows you to see the modules, there is no need for any pictures of the modules. Rather, a bunch of marketing hype and info are placed on the back; no real specs or anything, just basic company marketing hype to try and convince you A-DATA is the best in its class. 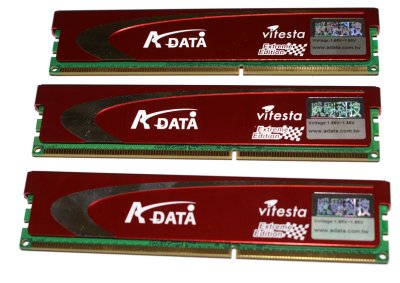 Removing the modules from the package (a very painful affair for me), we get to see the modules in hand. A-DATA has gone with using a red anodized heatspreader to remove the heat from the modules; they are quite attractive to say the least and are standard height DIMMS, so they are quite compact. 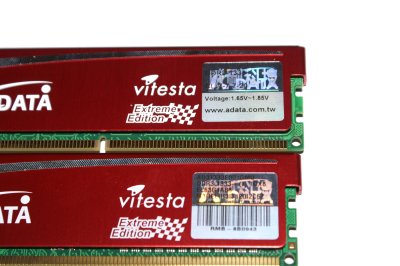 A-DATA has placed stickers on each side of the modules. One has the specs on it while the other has a simple hologram logo. The modules that were supplied in the kit were 1GB density, so a total of 3GB in this kit. These modules are rated for 1333 MHz using 7-7-7-20 timings which is quite low. However, its voltage rating is 1.65v to 1.85v. This presents a problem for Core i7 as 1.65v is the max this CPU can officially take without damage to the DRAM controllers; anything above this can result in permanent damage to the CPU.

Now to our favourite part, overclocking. With Core i7, overclocking is an interesting process in itself. We are still trying to master it; however, we have achieved some impressive results already.


Once again we bring out the Core i7 Extreme test system, the same one we used for the Corsair Dominator memory review. Today's tests only include the A-DATA memory at 1066MHz, 1333MHz and its max speed of 1520MHz. Since the Corsair memory was of a large size, we didn't want conflicting results, but we will soon be doing a 3GB vs 6GB vs 12GB article.

First on the list; EVEREST. Here we see there isn't a huge amount of difference between 1066MHz and 1333MHz. It seems the gain isn't significant, but then it's only synthetic.

Again in the synthetics we see performance gains when moving along the speed line, but it's still only synthetic at this time.

Latency and access times win it here and we can see that the memory loses out at 1520MHz as its latencies increase.

Pressing into real world gaming; there is very little difference between 1066MHz and 1333MHz. We do get a slight lead at 1520MHz, but this is also because the CPU is clocked up.

Core i7 is truly the way that the CPU market will be leaning over the next few months. While Core 2 will get a few refreshes, it's certain that Intel will soon ramp up with Core i7, introducing new models, higher clock speeds and inevitably better prices to make it more attractive.

Where Core i7 really gets a lot of its power from is the triple channel memory controller and while we have shown that even dual channel keeps it happy, there is no better feeling than stuffing it with more memory bandwidth than it knows what to do with. Having said that, A-DATA provides an extremely impressive kit here for your consideration.

Compared to the Corsair 6GB kit, while it's half the size, it's also cheaper. DDR3 still costs more than DDR2 but we soon hope to see this change. The other major advantage of this kit is that being only 3GB in size allows it to fit within the 32-bit OS usable memory window. 4GB and above needs a 64-bit OS to take advantage of any extra memory, so you're safe for XP and Vista 32-bit here. 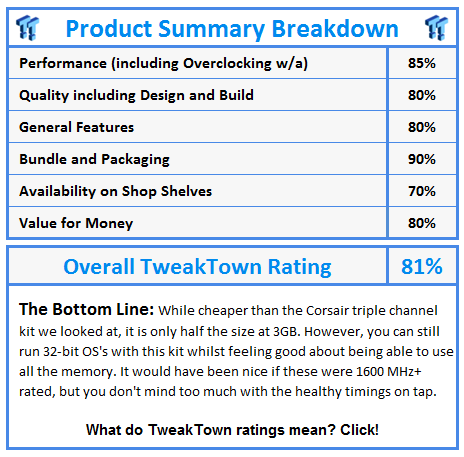