NewsReviewsArticlesGuidesGamingAsk the ExpertsNewsletterForums
TV, Movies & Home Theatre
Blu-ray Movies
There is no doubt that Director James Cameron, is a master of cinema. His filmography is littered with classics such as Titanic, Aliens and the originalTerminator. Yet, bucking a trend of inferior sequels is this: Terminator 2: Judgement Day. It's hard to believe that the film is now almost 18 years old. Released at the dawn of computer graphics technology, it's amazing that the visual effects in the film don't look horribly outdated; the fact that they still look brilliant is astonishing. But above this, the underlying story is just as, if not more compelling than it was all those years ago, both as a human morality tale and a caution against the dark side of technology.

The T-800 (Arnold Schwarzenegger) is a robot from the future, sent back in time to save the young boy John Connor, whom will grow up to become the leader of the human resistance against the merciless sentient robots. However, a more technologically advanced robot, the T-1000 (Robert Patrick) has also been sent back, with the mission of killing John Connor. Thus, begins a cat and mouse hunt with two unstoppable machines and with the future of the human race in the balance.

Of note, the version presented on this disc is the longer 'directors cut' and whilst I personally do prefer this version, which helps to flesh the film out, I wish that the studios would be a little consistent and put both versions on the same disc, especially since Blu-ray is more than capable of truly seamless branching.

Terminator 2: Judgment Day is presented in the widescreen aspect ratio of 2.35:1, encoded with the VC-1 codec.

James Cameron was a massive fan of the Super 35 video format and this was filmed as such. Unfortunately, films of this era and printed on that stock exhibit a fair amount of film grain, which may be disappointing to some Blu-ray fans. However, it is what it is and to lessen the effect of grain would be to do irreversible damage to the film.

Terminator 2 does for the most part have a cold and harsh visual look, often illuminated by dark blue hues. This visual look is perfectly emulated in this transfer. It's quite sharp and detailed; there's only a little hint of video noise to the proceedings.

The film has been released a myriad of times on home video over the years (I've personally purchased it eight times), however, this is now the definitive release of the film in terms of video (and audio) quality. The only way it can possibly look better is with a full Lowry Images remastering.

For the most part, the mix presented here is fantastic. It's extremely immersive, with great balance in the rears. There are more than a few standout scenes which showcased the surrounds, including the opening future battle sequence and the bike chase through the canals.

The score by Brad Fiedel is classic and it's nice to hear it mixed so well here.

My biggest complaint is the handling of the LFE track. Whilst most scenes that needed it were fine, I have a slight issue with the consistency of its depth. For example, a shotgun shouldn't really feel more bassy, than say, an exploding aircraft. Of course, this can be traced back to the master recording, rather than some error on behalf of the Blu-ray engineers, but it's an oversight nonetheless.

The packaging notes a Spanish language audio track which is not actually on the disc.

Overall, I think fans of the film will be happy and as I noted, it's definitely the best it's been heard in the home cinema environment.

There are absolutely no extras. This is a massive oversight, as there have been some extremely good extras produced for previous DVD and Blu-ray releases overseas. I wouldn't for a minute doubt that there won't be further re-releases of the film. Hell, Terminator: Salvation comes out next year, which should be a great tie-in. But for the first release of the film on Blu-ray in the Australian market, it is a disappointment. 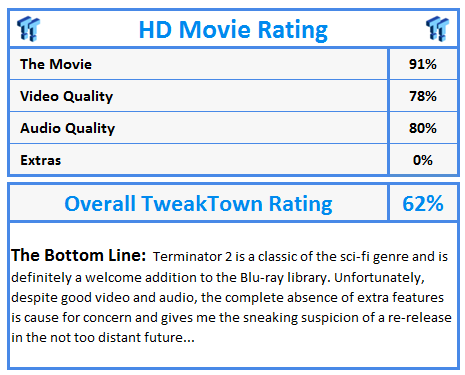