Overclocking a graphics card isn't really a hard task. With programs like Rivatuner you can find yourself overclocking your core and memory within minutes of setting up your graphics card.

For this reason, it does make us wonder why ZOTAC would take the time and effort to release a device that lets you do it without having to use software. Really, there was only one way to find out; get one and take it for a spin to see exactly what we have going on here.

What we'll do is have a look at the package and then take a closer look at how the device works. Once we've done that we will overclock our GTX 280 to see what we can achieve and run it through some benchmarks.

So, with that all said and done let's get stuck into the package before firing it up and seeing if there are any specialties here.

Thanks to the clear design on the front of the package, we can see the actual device that we're testing smack bang in the middle. A sticker lets us see what kind of information is shown on the device. 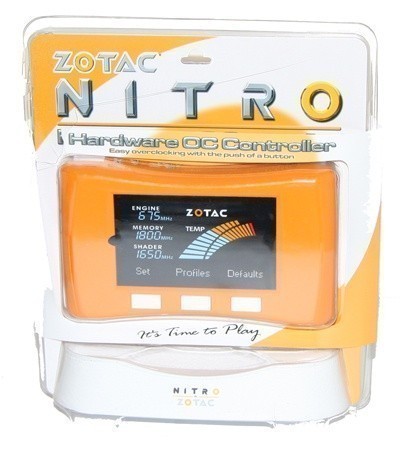 At the top of the package we can see the ZOTAC logo along with the NITRO one. Across the bottom we can see a motto and below that we have a dock that the device sits in. 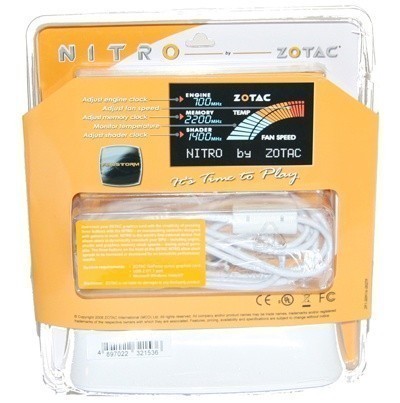 Turning the box over, we again see the ZOTAC and NITRO logo while the bottom shows us the rear of the dock. In the middle of the package we can see a USB cable along with a bit of information explaining what is what on the NITRO. 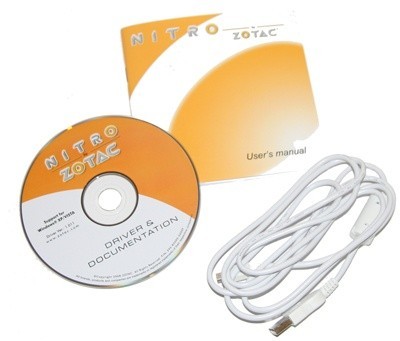 As far as extras in the package go, there isn't a whole lot. Apart from a manual and driver CD, we have a USB cable that helps connect the device to your computer.

Setting up the device is pretty simple. With the USB cable in hand we plug the device into our testbed; we then use the CD included in the package and install the drivers needed to get the device up and running. Once it's up and running we open up the Firestorm software that then chucks the information we need onto our NITRO. 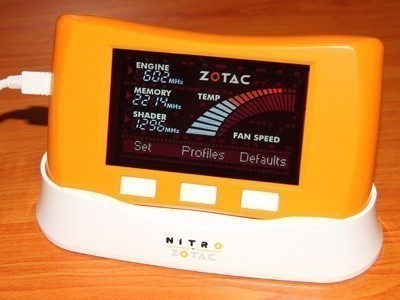 With the device now ready for action, we can see the buttons across the bottom correspond to different settings. The furthest sets our clocks to defaults, the middle lets you go to any profiles you have setup and the first one let's you set the speeds. 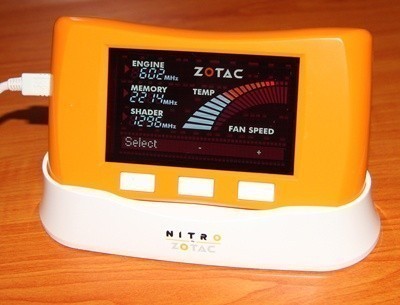 With the set button pressed we then have the option to select what we what to change. We also have a + and - symbol that let us increase or decrease the clocks. What we do is press select twice to get us down to the shader clock. 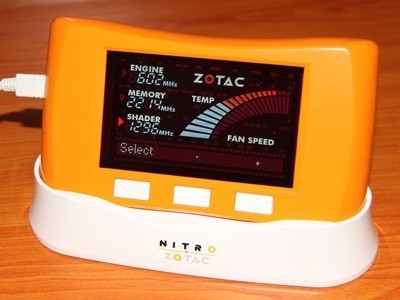 We then press the + button a few times and we can see the shader has been increased to 1311MHz from the original 1296MHz. 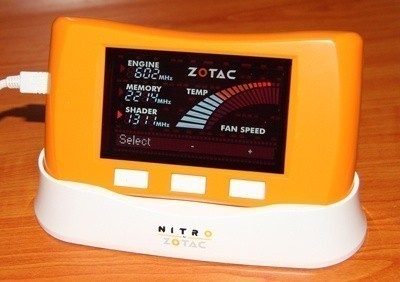 The whole device really is very easy to use with the same steps being taken to increase both the engine and memory clock.

Under Vantage, our first test shows that the increase in clocks give us a boost in both the Performance and Extreme benchmarks.

WIC also manages to see some increases in both the minimum and average department across all resolutions.

We again see a little bump in performance under Crysis Warhead. It's only a small increase across all resolutions; nothing to get too excited about.

Far Cry 2 also manages to see a small increase at all resolutions, but once again it's nothing to get too excited about.

Like all our other games, Left 4 Dead sees a small increase in performance with the extra clocks.

Turning on AA and AF, we again see a small increase in performance under FC2.

WIC shows a slight gain in the average department, while only a single FPS is seen in the minimum department with the higher clocked card actually being the lower one.

Left 4 Dead manages to see a very small gain in performance, like most of the games we've seen here today.

There isn't a whole lot to the NITRO. Really, the device does exactly what it's supposed to do, so you can't really fault it in that regard. We have to wonder, though, who is really going to want the device? Anyone who really wants to overclock is probably already using something like Rivatuner.

While the device is apparently only for ZOTAC based NVIDIA cards, we had no problems with the device running on our GIGABYTE GTX 280 and we were able to change all clock speeds without any issues. With that said, if you do run into a problem where the FireStorm software spits out an error, if you hold the shift key while pressing the OK button the device will work as it should.

Ultimately, the NITRO is one of those devices which doesn't have anything wrong with it. However, there's just nothing that really stands out. Overclocking these days isn't really a hard task and we're not sure who really wants to have their clocks on display at all times.

It will be interesting to see what ZOTAC do with the device over the coming months. Hopefully we will see it bundled with some of their cards or a newer version come out that offers more features. 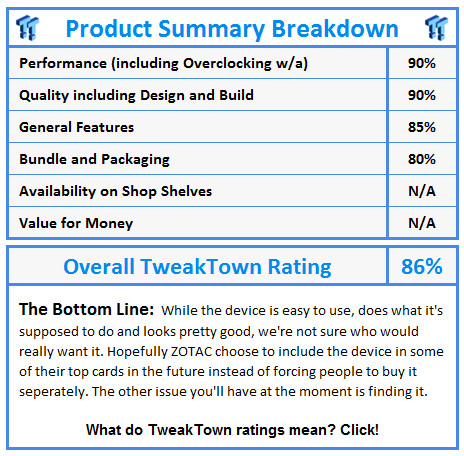