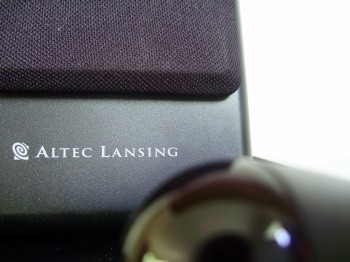 Altec Lansing or AL have been a dominant force in professional and home audio for some time and are a very well respected one at that. It's only of recent times that AL have branched out into multimedia solutions, including small stereo iPod systems and much larger full surround systems for games, music and movies. 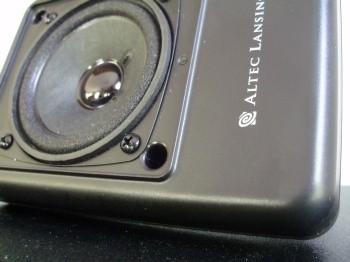 These days AL are focusing on more affordable systems that are very functional without entering into a higher pricing bracket. Now, I'm not sure about AL's exact reasons for concentrating on the lower end of the spectrum, but let's hope they can combine value with performance, which is admittedly not an easy nut to crack for any company. 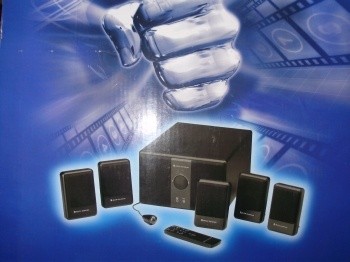 The VS3251 system is an analog 5.1 channel system consisting of five small speakers, each with a 2.5" full range cone enclosed within a sturdy molded plastic shell. To complement these we have a 5" medium sized subwoofer unit, which is of the front firing long throw breed enclosed within an MDF box, with the use of MDF being to increase tonal accuracy and natural resonance within the unit. 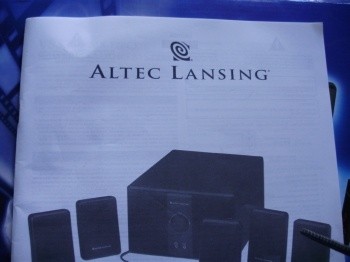 As is the case with most systems like this, the amp is housed within the sub unit and is good for 70 watts RMS all up, with 9 watts being sent to each speaker and 25 watts to the subwoofer unit. There are no detailed specs on amp choice and design listed with the product. 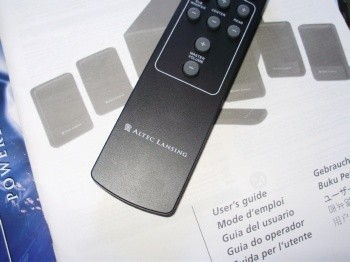 Frequency response figures are given as 40Hz-17KHz (-10db) with the minus ten meaning that anywhere within that range of 40Hz through until 17000 the signal may be attenuated by up to 10db, which is quite a lot. As a reference; figures are usually given with 'plus or minus' of 3db, so AL have generously given themselves an extra 7db of breathing room with those figures. 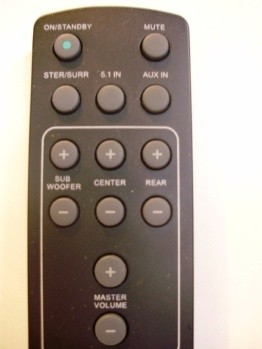 Give me control baby; featured here is a lovely little remote (batteries included) in order to control the systems various levels. We have standby, mute, stereo, 5.1 or aux, then control for the sub, center, rear and master volume. A small infrared sensor is also included for desk mounting.

On top of this we also have a volume dial on the front of the sub along with headphone and aux inputs with a small green light to indicate that the system is switched on and is active. 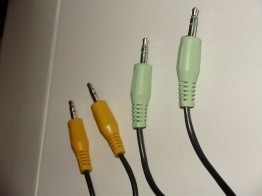 Connection to your source is done via a supplied three way 5.1 channel analog stereo mini-jack cable which will connect directly to your soundcard or iPod etc.

Moving along, the actual setup of the system was made easier by the fact that we are not dealing with multiple inputs. So once the system has been placed out, setup is very simple. 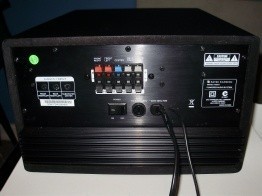 The box is rather large and features quite a lot of egg carton style packaging that protects the contents well. All components were well wrapped and in very good condition by the time they arrived at my door. The box art is great, featuring a nice colorful design and also illustrating exactly what the system includes as well as providing system specs for everyone to see. I cannot think of any way I could make the packaging more effective than it is already; good job.

How Do They Sound? 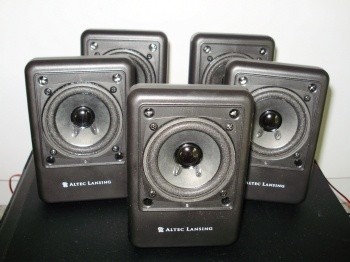 For the purposes of testing I have several systems around my home to provide an adequate representation of where these speakers stand, all things considered. I think that when evaluating speakers in general, it's a very good idea to try and listen to the same piece of music through several different systems.

In fact, owning a 'test' CD that is known to the listener like the back of his/her hand can be a usual thing when testing speakers because it will soon become apparent as to what strengths and weaknesses are evident across different systems.

Of course, this is the challenge of a good engineer, to be able to produce a mix that sounds good on anything from $100-$10,000 which is a far harder task than one might've first imagined.

My current test bed features an ASUS Xonar sound board and also an Auzentech Prelude based on Creative labs X-Fi chip, all running the latest drivers for XP Pro. I also use Winamp and PowerDVD for testing.

Generally speaking, the VS3251 is a rather bright chirpy system that takes quite instantly to vocal work and brings out human voices very well. This is probably due to the full range drivers here being better suited and more 'at home' within the 1-5KHz range that the human voice falls into.

Unfortunately, I cannot simply say that the rest of the frequency spectrum is brought out equally here, as there is a real hump around the aforementioned range, heavily contributing to the sound being completely devoid of any timbre and tonality, so to speak.

To illustrate; try and imagine those annoying megaphones we all remember from the high school days that would cut through us like a knife through butter and leave our ears a little worse for wear. 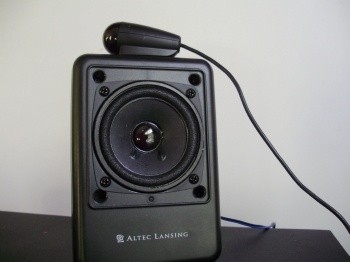 How Do They Sound? - Continued

Delving deeper into the range 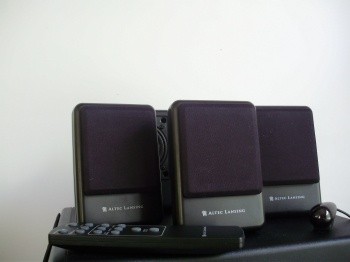 Bass performance is respectable from the 25 watt 5" subwoofer. While not going particularly deep or loud like a subwoofer should, it does produce 'some' bass, which is good to report here.

Volume control ranges from zero to maximum with zero being more like the max and the actual max being really quite unusable, akin to a squirrel trying to claw its way out of the bass unit. So let us exercise caution when adjusting bass. 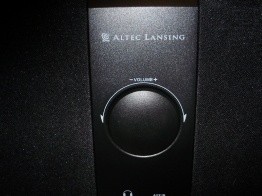 On another note, for a small environment where as a gamer you simply need to hear what's going on around you on a dedicated 5.1 system, I think this system could provide, as a gamer does not need a speaker to have good timbre to the sound or produce a subtle upper range with neutrality across the spectrum. They want to hear how far away the enemy is, via the fantastic 3D positioning technology available these days thanks to the immensely involved EAX algorithms used to position individual sounds within an artificially created 3D environment.

So, from the point of view a gamer has, why not? These speakers can do all of that and they have 'enough' power for this use. To support this theory I was in EB games the other day, which is a dedicated gaming franchise and the only system they had in store were these. Yep, that's right and they were going for $70 which is a steal and leaves plenty of change for that much needed GPU upgrade. 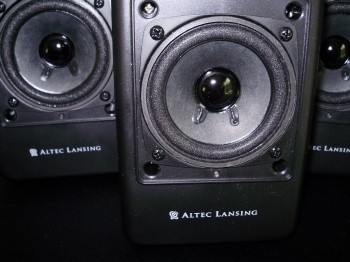 As covered before, I think this system has been designed for the gamer on a budget, as it seems to meet the needs of this user down to a tea. It provides a bright and energetic sound scape to place gunshots and other special effects. However, it's the price that makes this such a perfect system for anyone who owns a Playstation 3, XBOX 360 or PC gaming setup. 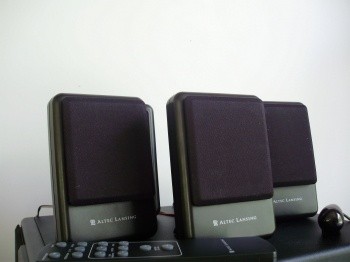 Movies can contain a lot of subtle nuances, like music, that can easily be missed or not even reproduced to begin with. It's these dynamics that set the scene. The upper most spectrum and lower most spectrum of our hearing range allow us to feel what's going on as much as actually hearing it. Unfortunately, in the case of the VS3251 the upper and lower most are in fact 'mostly' absent here for all intents and purposes. So, while movies can be experienced in 5.1, I do not feel much of a representation is given of the source material. You get the feel of the material, but certainly not the emotion.

Music is not the strength of this system, as I have covered earlier. However, for someone playing back a lot of heavily compressed audio via MP3 or iPod, things are not as bad because these formats of compression heavily cut the high and low frequencies in a bid to decrease file size, but at the costly expense of the emotion of the artist contained within the original recording itself. Having said that, though, I cannot solely recommend these speakers for musical reproduction because I do not feel this is their primary function. 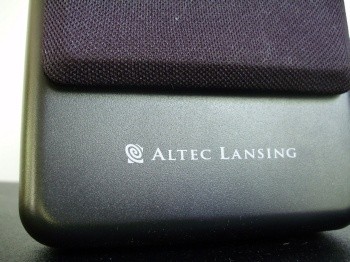 To offer some sort of final word here, it's important to consider that these speakers have been designed primarily as a budget gaming system that offers good value and performance for console gamers or PC gamers alike.

They allowing the user to hear and feel all the action of bullets whizzing by and explosions taking place in a real 5.1 environment, which for a $70 street price is outstanding value. I don't think that even buys a single Xbox 360 game, just to put things into perspective. 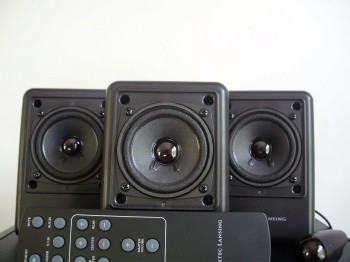 Movies and music are not great, so don't buy this system to relive the emotion of a great concert or a well recorded piece of music, because you will be disappointed by frequency response and tonal accuracy. To a lesser extent, film is the same, although I see no issues with enjoying any TV program or sitcom that is not recorded in high bandwidth like films are. Even casual radio listening would be fine here, as that's another heavily compressed medium.

Finally, I don't think AL has done a bad job at all in designing this system. As a PC or console gaming system, it does exactly what it says and for a great price! 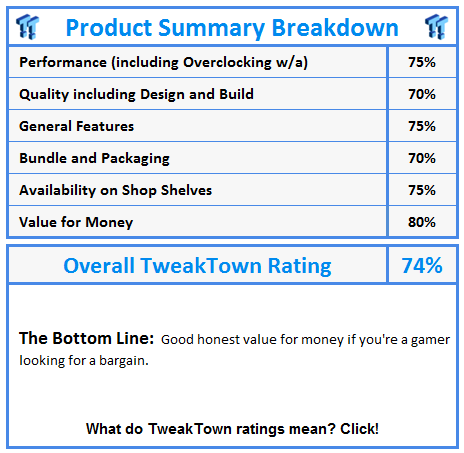