As I have mentioned previously, my age (or lack thereof) has prevented me from seeing any of the Indiana Jones films theatrically, where they were really meant to be seen. Nonetheless, I was brought up with easy access to the films and then eagerly purchased the 2003 DVD release of the re-mastered films.

The franchise, created by powerhouse team Steven Spielberg and George Lucas harkens back to films of the early 1930s and 40s and evoke memories of daring-do and classic Hollywood. The first film, (later re-titled for video) Indiana Jones and the Raiders of the Lost Ark was a major success, so a sequel; Indiana Jones and the Temple of Doom was fast tracked. The latter was far more violent than the first (culminating in a scene where a cult leader rips a guys heart from his chest, while it continues to beat!), and divided opinions quite heavily. Five years later Indiana Jones and the Last Crusade hit theaters, and saw a return to the more 'fun' aspects of the first film and wrapped up the trilogy in a nice way.

However, as is the nature of Hollywood and fickle audiences, nearly twenty years later we have Indiana Jones and the Kingdom of the Crystal Skull. It's a film that didn't need to be made and after watching it, probably didn't deserve to be. Its biggest flaw is that after twenty years, innumerable story treatments and script re-writes, this is what we got. A half-baked and yet convoluted story, a Frankenstein-like creation that clearly plays out as a culmination of ideas from script #1, script #2 and so on.

Set in the 1950s, during the height of the Cold War, Indy is set up by the Soviets to find the remains of an alien that crashed in New Mexico. A rousing chase sequence follows which then leads to an entirely improbable, but nonetheless entertaining sequence involving a nuclear test site and a lead lined fridge. It is at this point that the plot becomes more and more meaningless and more and more about moving from one action sequence to the next, each time lessening the emotional investment within. I don't wish to ruin the film, however I must say that the film culminates in an event that is both entirely out of character for an Indiana Jones film and which broke any remaining good will I had towards the film.

I enjoyed the well of souls melting Nazis from the first film. I accepted that a man can continue to remain conscious after heart removal from the second and I liked that the Holy Grail can bring a man back to life. However, what transpires at the end of this film...this was not a jump that I was willing to make, nor accept, nor enjoy.

Despite this, I would be interested in another Indiana Jones movie to be made (and rest assured, due to the immense amount of money this film has made, the pressure is on once again), to give the once great character a final, proper send off, which Indiana Jones and the Last Crusade did perfectly well, all that time ago. 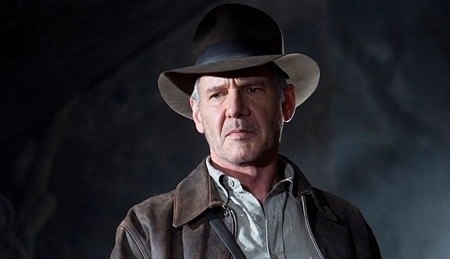 Indiana Jones and the Kingdom of the Crystal Skull is presented in the widescreen scope aspect ratio of 2.35:1, encoded in MPEG-4 AVC.

According to one of the behind the scenes featurettes, the film was completely filmed and then edited entirely on film. However, based on the near perfect presentation, you wouldn't know it wasn't filmed completely in the digital realm. The image is very sharp and clear, apart from a few instances of soft filters applied to hide some of the actors ages (especially Karen Allen). Throughout many sequences of the film, the colour has been desaturated slightly and bathed in a golden yellow sheen, to evoke 1950's America, a wholly deliberate effect.

If I had any complaints, I would have liked a little more film grain throughout, which would have helped to blend this film with the previous three. However, Indiana Jones and the Kingdom of the Crystal Skull is a winner in the picture department. 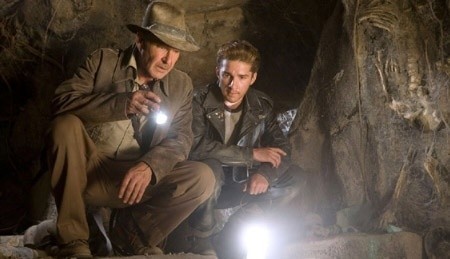 From the start of the film, featuring the introduction of the new THX logo, I knew I was in for a treat and it didn't disappoint. For all my complaints about the film itself, at the very least it sounds like an Indiana Jones film. Sound designer Ben Burtt dug into the archives and found the original recordings for iconic effects such as Indy's whip, so at least the film sounds like it's from the same universe as the previous entries.

Surround sound usage is high, as is some great use of the low frequencies. The action sequences, including the sequence in Nevada sound brilliant and mastered very well, making you want to pump out a few extra DB's on that amplifier.

John Williams returns to provide the score and whilst the Indiana Jones march is as brilliant as ever, Williams fails to create any new, entirely memorable cues. 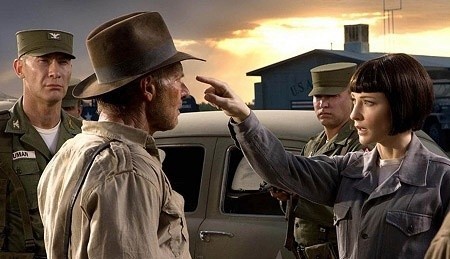 Paramount continues to lovingly craft their Blu-ray releases. They might have been late to the game, but when they produce such high quality packages as these, it's hard not to forget their past transgressions.

The vast majority of extras are presented in 1080 HD and as such look excellent. The use of scenes from the previous Indiana Jones films well and truly whet the appetite for the inevitable Blu-ray release of those. Let's hope it's sooner rather than later.

Steven Spielberg continues to eschew recording audio commentaries, so it's left to the 80 minute 'Production Diaries' documentary to tell the stories. As is common with longer documentaries these days, it's cut up into six separate featurettes, but clearly meant to be watched with the 'play all' option. This documentary serves as a very in-depth documentary of the entire filming process, pretty much from the start, right up to the end of production. This should answer the majority of questions people had about the film!

'The Return Of A Legend' featurette talks briefly about the long gestation of the film, but fails to go in depth about the number of drafts and their authors (including Frank Darabont), but quickly brings us up to speed to the final draft by Spielberg regular, David Koepp. It was interesting (and just a little telling) to repeatedly hear the crew say they thought they were finished with the Indiana Jones movies, but I laughed a little when Spielberg casually throws it out that "fans demanded it" - so it's our fault eh, Spielberg?

'Pre-production' featurette is a brief journey from the time that the movie was greenlight to just before filming. It was nice to see Karen Allen, yet a little disappointing not to see Sean Connery. However, based on how the film turned out, probably for the best he didn't.

The following featurettes; 'Warrior Makeup', 'The Crystal Skulls', 'Iconic props' take a more in depth approach to these very specific parts of production than what is offered in the longer, more over-arching main documentary. By far the most interesting is the 'Crystal Skulls' which goes a way to justifying their hokey inclusion in the script.

'The Effects of Indy' Featurette is probably going to be the most controversial of all the extras. For all the pre-release talk of how the film would, for the most part, eschew CG effects and rely on old school practical effects, the truth is revealed here. It's no surprise to anyone that there is a lot of CG in the film, from wire-removal, digital backgrounds replacing matte paintings, to fully CG animals and creatures. While it's nonetheless interesting to see the creation of the effects, many of the problems inherent in the film can be traced back to the methods revealed here.

'Adventures In Post Production' featurette is a quick summary of the final stages of the film, from the changes made to elements of the story, to the final sound mix including John Williams' score; its all glossed over here.

'Closing - Team Indy is a nice send off for the crew whom normally only get to be seen in name only over the closing credits. It's nice to put a face to the name.

The three 'Pre-visualisation Sequences' are generally uninteresting, but show how prepared the sequences were.

I have always loathed Still galleries, yet there are seemingly hundreds of photos here. I neglected to go through all of them.

The Indiana Jones Timeline is an interesting use of BD Java, with fairly in-depth material revealed on both behind the scenes and story elements of the film.

Finally, we have two Theatrical Trailers, presented in 1080p with Dolby 5.1 sound. I remember just prior to release, the final theatrical deliver being delivered a mere three or so weeks before the films release, no doubt to try to prevent a Phantom Menace type backlash. 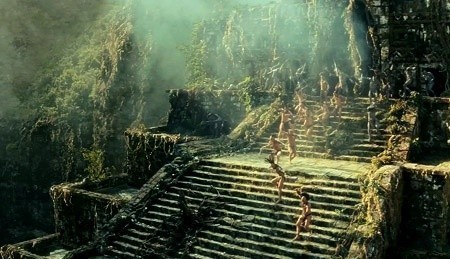 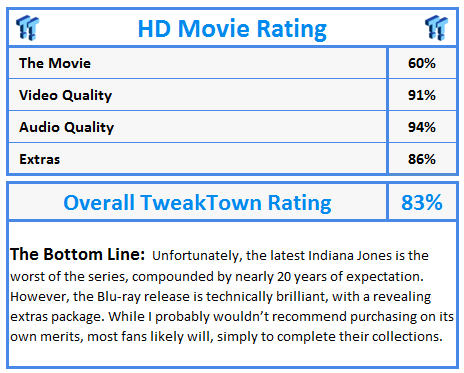