Being one of the younger members of the TweakTown staff (in my early 20's), I missed the majority of the mid 1980's Transformers craze, catching only the tail end of the mass popularity during my formulative (read: cartoon watching/ toy playing) years. However, the nostalgic qualities of the franchise are so strong as to support on going animated shows, toys, video games and now this, the live action offering. The fact that the movie is as well made and entertaining as it is, has surprised many (myself included), when one looks at the history of the franchise which has its creation in a bunch of plastic play things.

Young Sam Witwicky (Shia LaBeouf) happens upon a transforming mechanical being named Bumblebee when choosing his first car. Far from a chance meeting, the Autobots, led by Optimus Prime have arrived on Earth as refugees from the planet Cybertron to stop the imminent destruction of our planet, the same fate as was met by theirs. However, the Decepticons, led by the evil Megatron (Hugo Weaving) will stop at nothing to take over the world, with the All Spark; a weapon of immense power which can convert inanimate machines into unstoppable warriors.

Yes, the plot is convoluted, yet at its core is a fun, old fashioned tale of good vs. evil, with more than enough wit and rousing moments further helped along by brilliant visual effects and a charming performance from the cast (particularly La Beouf) to skim over the cracks. The fact that the movie made so much money means that a sequel has been fast tracked. In fact, it's been shooting for some months now and is set for release mid next year.

As a side note; this movies' release onto Blu-ray has been a pretty rocky one. At the time of the cinema release in 2007, Paramount were releasing movies on both Blu-ray and the now deceased HD-DVD format. However, buoyed by the immense success of the theatrical release, the HD-DVD group, led by Toshiba, spearheaded a successful attack on Blu-ray by signing Paramount Pictures (and all subsidiaries) to exclusive release agreements preventing movies from being released on the rival format. The alleged $150 million contract stood until earlier this year when the HD-DVD format collapsed in stunning fashion, paving the way for this much anticipated release. 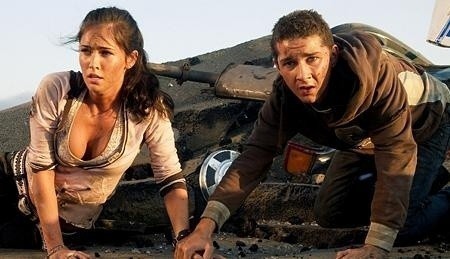 Transformers is presented in the widescreen scope aspect ratio of 2.35:1, encoded in MPEG-4 AVC.

Last year I had the pleasure of seeing Transformers no less than eight times, in three different cinemas; one of them being IMAX. The fact that Transformers on Blu-ray looks better than seven of those presentations, is no mean feat at all. If anyone has seen any Michael Bay film, there will be no surprise to the visual look of the film; big bold brassy colours with pumped contrast and a fine layer of artistic film grain. Well, all of this is represented perfectly on the Blu-ray.

Rather than re-purpose the HD-DVD encode, Paramount have gone back to the original source and re-encoded the film to take advantage of Blu-rays larger data rate. So it's no real surprise that that the film is completely devoid of any transfer-induced problems such as compression artifacts. Apparently this new encode was approved by Bay himself, a vocal proponent of Blu-ray, and as such there has been no attempt to lessen the films grain quotient by applying noise reduction.

When all is said and done, I have no qualms about recommending Transformers as 'grade A' demo material. 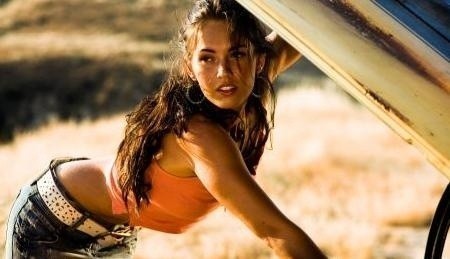 I will get it out of the way now: Transformers audio is entirely demo worthy. Again, what is on offer here (with the appropriate audio equipment of course) is better than seven of the eight cinema experiences, and just shy of the sonic perfection of the IMAX experience.

From the first few minutes of Transfomers, the subwoofer kicks into life and the surrounds bustle with activity and they don't let up until the end of the film. The film will demand every ounce of power that your speaker system can provide and you may even need to turn it down slightly (or enjoy the terror). A few scenes towards the end of the film will test the low (sub 20Hz) frequency that your sub can provide, providing a great test to see what your sub does under these circumstances.

I was particularly impressed by the score by composer Steve Jablonsky. It's a great score, with some very memorable cues, so much so that I bought the now out of print soundtrack. It really comes to life when presented in uncompressed form and the sound effects do settle down at times to show it off.

Transformers audio really is that good. However, be prepared for the inevitable upgrade bug that will probably be unleashed with whatever audio hardware you own. 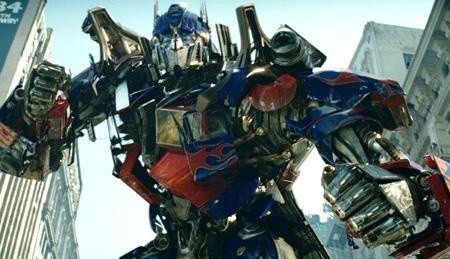 Paramount has ported all the extras from the previous HD-DVD release, including all the online extras, which is nice. Let's take a look.

Michael Bay flies solo on the Directors commentary, and despite his nasily, slightly whiny voice, I really enjoy the commentaries he provides for his films and this is no exception. Bay talks at length on many topics, often jumping from subject to subject, but still manages to engage the listener. As much as I enjoyed it, it would have been nice had he been joined by someone else, but it's a small complaint.

Transformers HUD is somewhat of a picture-in-picture grab-bag of material, going somewhat further from just a trivia track through the movie, also providing some behind the scenes material and storyboards, but falling short of the best picture-in-picture tracks as featured on the likes of The Matrix and Batman Begins. Still, for fans it's a pretty interesting watch.

BD Live offers up a few more ways to watch the film, if you have an Ethernet cable handy in your viewing room. First up, we have the Intelligence Mode which provides a few details on the GPS whereabouts of the characters and action, which Transformers are on the screen at the time and trivia about the actors. The next is Transformers Profiler, a more text oriented behind the scenes trivia track. These are all nice features, if lacking a little in substance. My small gripe is that these features were available from day one of the release of the film, so while it's nice to get some traction with BD Live, there is no real reason why these shouldn't be on the disc in the first place.

Onto disc two, the vast majority of features are divided into two groups: Their War and Our World, divided into separate featurettes, but with a handy 'play all' option.

Our World runs for an aggregate 50 minutes, and is made up of the following featurettes: The Story Sparks, Human Allies, I Fight Giant Robots, Battlegrounds. This documentary deals with the real world Transformers phenomena, casting, and the rigours of filming. It's great to see the practical effects work on set (Bay loves to do as much for real as possible), and the likeable Shia La Beouf becomes even more likeable with his behind the scenes quips - he really is a funny kid. It's also pretty interesting to see the selected footage of Michael Bay at work on set. He is well renowned for being very demanding, even somewhat diva-like on set, but it's quite telling to see hints of cast and crew frustration in some of the footage.

Their War runs just over an hour, and is made up of the following featurettes: Rise of the Robots, Autobots Roll Out, Decepticons Strike and Inside The Allspark. This documentary deals more with the Transformers themselves, the history of the franchise (with some nice footage from the original series) to deciding which robots will get the chop and which ones will feature in the film. Later on, we see the mind messing mathematical work that went into making the robots transform believably, with thousands of moveable parts. The highlight is seeing the legendary Peter Cullen in the recording booth. Thank God they kept him in the film.

Transformers Tech Inspector is a BD Java enhanced extra which allows you to view rotating CG models for six of the main Transformer characters, as seen in the film. It's interesting for a bit, but not something you will dwell on.

From Script to Sand is a nine minute featurette that deals with the shooting of the Scorponok attack in the desert. The behind the scenes footage of the under-the-sand primacord coming for the actors is funny, however serious the consequences could have been, had it gone wrong.

Concepts is a two minute long featurette of concept artwork, which I am normally not a fan of, but this is presented very nicely and is set to appropriate music from the film, moving at a quick pace.

Finally, we have three Theatrical Trailers, presented in 1080p with Dolby 5.1 sound and very effective in drumming interest in the film - especially the teaser which showed no footage from the final film.

Whilst the extras package is top tier, I am disappointed that Paramount didn't include any of the deleted scenes that were integrated back into the film (albeit clumsily) in the IMAX presentation. Whilst there was nothing terribly great in those scenes, it's a shame considering the extras package is complete in pretty much every other way. Still, I guess they need to hold back content for the inevitable 'special-er edition' when Transformers 2 is released. 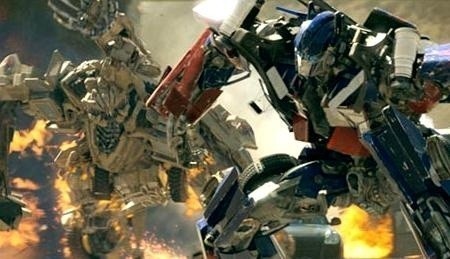 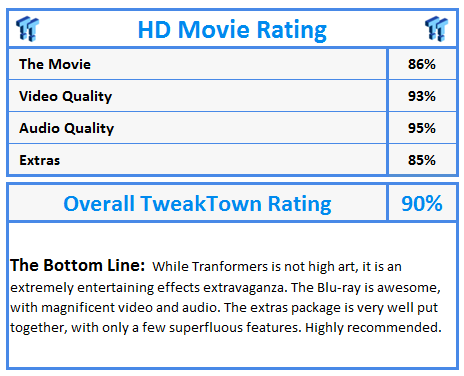