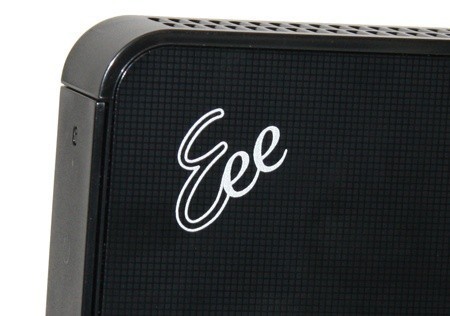 I'm not sure if there's something wrong with me but I never got caught up in the whole EeePC phenomenon. While the EeePC did spark the phenomenon that is the Netbook, the features and target audience for these products just weren't me, which meant I generally didn't care too much about it.

With that said, though, it isn't to say that the product wasn't good; you only have to look at the amount of clones out there to realize there clearly is a market and the cost of getting into a laptop has never been cheaper thanks to the huge amount of competition out there now.

ASUS thought it was time to expand the Eee name and bring out something for your desktop; thus, the EeeBox was born. The overall purpose of this product is very similar to the EeePC; it's got to be cheap and perform well in the tasks it's suited for.

We wonder, though, can an Intel Atom processor with 1GB of RAM really do much for us? There's really only one way to find out and that is to take the time to use and examine the product ourselves.

What we're going to do is have a look at the package and the EeeBox itself and then talk about our experience using it. I've taken the time to poke and prod my way around Windows XP and I will give you a rundown of my thoughts on it.

Considering a whole PC is packed inside, the box is actually pretty small. The front of the box doesn't give us a whole lot of info; we've got a picture of the product in two colours along with the name of the product and a little motto. 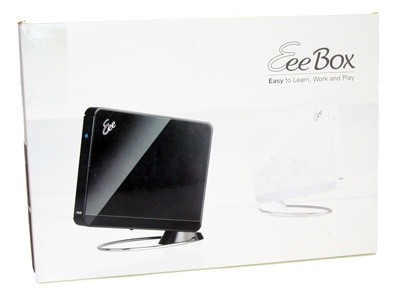 Turning the box over doesn't really give us much more with the information side of things; we again have the logo and motto along with a few more colours being shown alongside some more details across the bottom relating to ASUS. 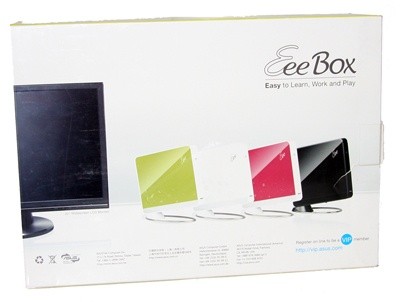 On the side of the box we have a sticker that gives us a run down on the specifications of the unit, but that we will look into later. 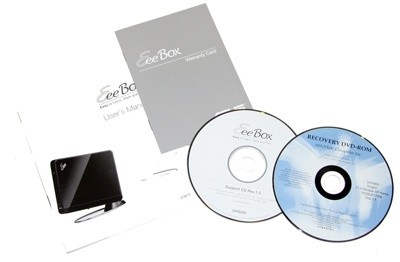 Opening up the box and diving inside, we have an expected line-up of paperwork which includes a manual and warranty card. Alongside that we also have a Support CD and Recovery DVD in the event you manage to ruin your install. 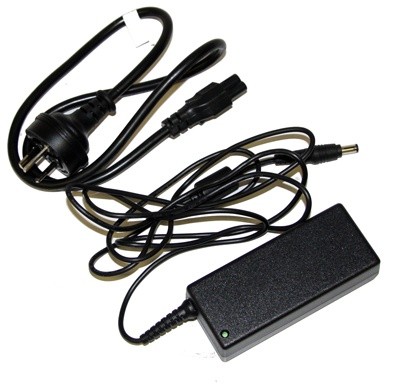 Also included in the package is a power pack that lets you obviously power the unit. 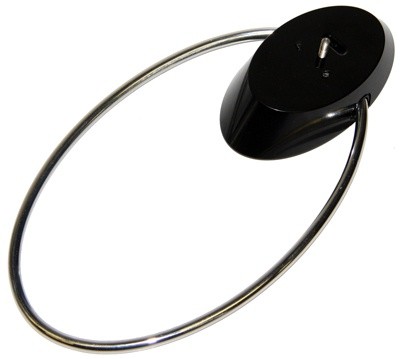 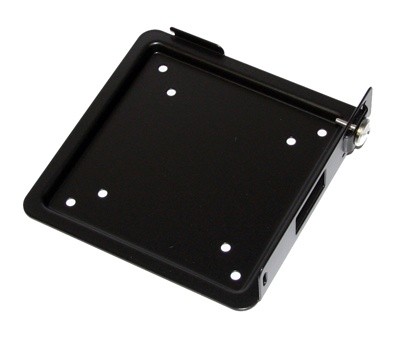 Other useful gadgets included within the package are some stands for the unit, depending on how you want to mount the EeeBox. 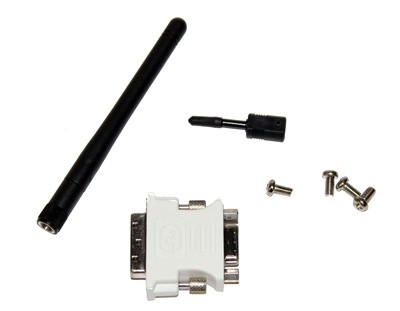 Finally, we also have an antenna for the wireless connection, a single DVI to VGA connector in the event your monitor isn't DVI and a few screws that are to be used with one of the stands.

Pulling the EeeBox out of the package, there isn't a whole lot to it. Really, you're not looking at much more than a black chassis with some stickers and a logo on it. 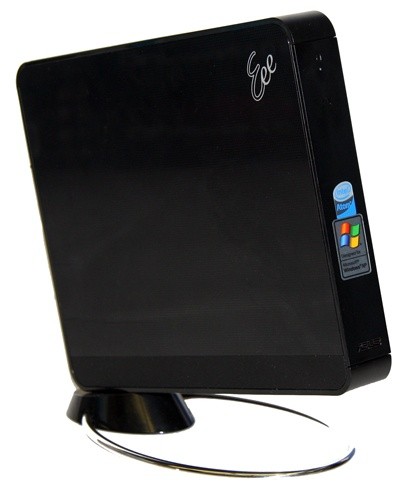 With one of the stands in hand, it was time to set the EeeBox up and see just exactly what we're looking at. 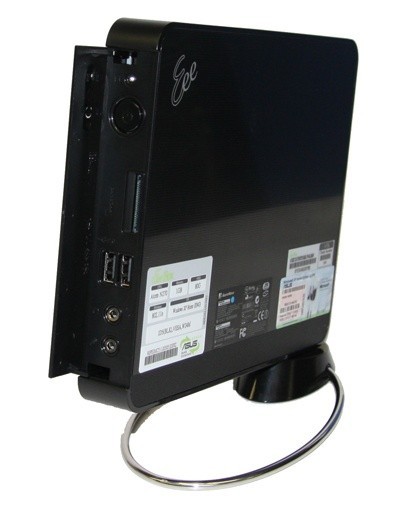 The front of the unit doesn't give us a whole lot; we've got an Intel Atom and Windows XP sticker on the front. Flipping the flap open exposes ourselves to a power button, HDD activity LED, card reader, two USB 2.0 ports and two audio jacks; one for headphones or speakers and the other for a microphone. 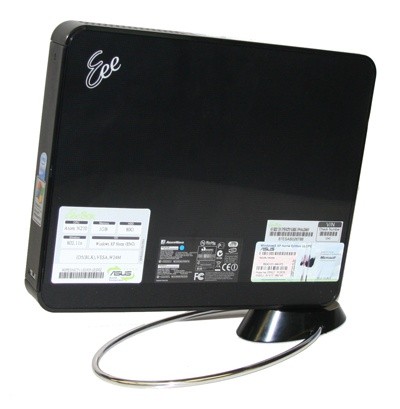 Looking around the unit, the other side has a load of stickers on it which include the specifications of the unit, our Windows XP information, serial information along with another sticker that lets us know about the approvals the unit has. 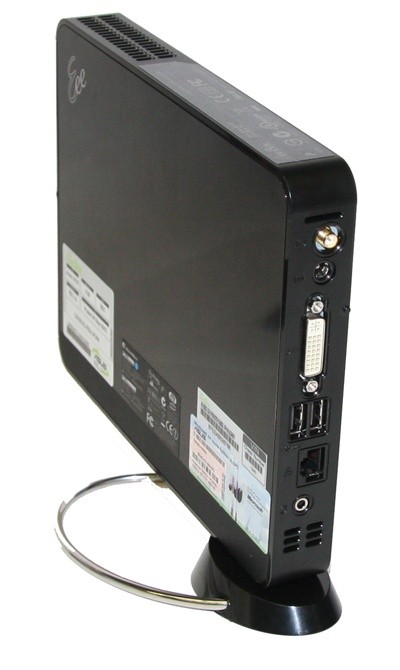 Heading to the back of the unit, starting from the top we have our antenna point for the 802.11n wireless networking and below that we have where our power plugs into followed by a DVI connector, two USB 2.0 connectors, gigabit network port and another audio jack.

What we don't have is a PS/2 port which did cause a few problems since just about every keyboard in my testing area is PS/2. What I had to do was grab my Logitech G15 keyboard so I could type. While USB keyboards are readily available PS/2 still seems to be the weapon of choice for most people; it's just worth making note of.

As far as specifications go, the EeeBox we're looking at today isn't packing anything too powerful. Alongside the Intel Atom N270 that runs at 1.6GHz we have 1GB of memory and an 80GB hard drive. 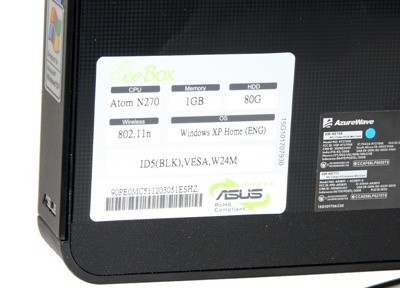 Networking is provided with the help of a 802.11n wireless connection or a Realtek RTL8168C(P)/8111C(P) PCI-E Gigabit network port. As far as operating systems go, we have Windows XP Home included alongside the ASUS Express Gate operating system powered by Splash Top.

Getting hands on with the EeeBox

Since I hadn't had a chance to play with the new Intel Atom processor before, I wasn't really sure what to expect. While 1.6GHz is considered pretty low to the general computer enthusiast, when Intel first launched the Core series at a similar speed we all ended up pretty surprised at what it was capable of.

So with expectations a little bit all over the place, it was time to power on the EeeBox. We quickly find ourselves in Windows and staring at a pretty standard Windows XP desktop. Thanks to this particular unit doing the rounds to a few other people already, we had a number of applications already installed which was handy since I didn't have a USB ROM drive handy.

It was time to take the unit for a spin; first I fired up internet explorer and checked out everyones favorite tech website, TweakTown.com. I then proceeded to set it as the start page so the next reviewer could be greeted with the same awesome site.

Cruising the net on a whole was all pretty effortless; it's not exactly the most intensive thing for me, but for people who just want to do a bit of email and cruise some websites, the EeeBox is looking like a perfect companion.

Next, it was time to check out Office and see how we go. Firing up this review, I started to write on it. Again, there wasn't anything wrong with it, everything was pretty responsive. Since I was also using a 24" monitor outputting 1920 x 1200, I had a fair bit of desktop real estate so it was time to fire up an XVID movie and see if I could watch something in the background. Not to any real surprise, the EeeBox handled the whole multi-tasking process pretty well.

Feeling pretty confident with what the EeeBox could do, it was time to see how it went with some higher def content. Firing up a 1080P movie had us greeted with a very chunky picture. Not being able to handle 1080P, it was time to see how we went with 720P. While it was looking a lot better, it wasn't smooth. What I found was 100MB sample files would run ok but the 4GB+ movie files wouldn't run as smooth. That's a bit disappointing as the unit would make a great little media center. Unfortunately it just wasn't meant to be, so I continued on my way using it as an office machine.

Express Gate is something that ASUS has been pushing for a while now between their motherboards and laptops. It's another operating system embedded that loads almost instantly and lets you do a few things.

With our network plugged in we fired up the Express Gate and checked out how the whole thing worked. While you can do little things like cruise the net and play some online games, it doesn't seem like it's all that helpful.

ASUS have been pushing it in Australia on their laptop range, saying that you could check in online for your flights without having to get into Windows. The thing is, though, Windows load time is pretty quick these days and the whole Express Gate feels a bit pointless.

The whole feature seems to be more of a marketing thing rather than anything else. Who knows though, while it may have no use to me, some people may have a use for it and if you do please comment in our forums as to how it is handy to you.

The EeeBox really does what it's supposed to and very well. It's a well priced machine that is compact, looks good and does general office work well, including email, MS Office and internet. You could watch some XVID movies and TV shows, but that's really about it.

The whole thing really isn't bad for someone who wants to get their kids something that pretty much lets them only do work on, or perhaps for a company where what you are allowed to do is limited; not so much in the permissions department, but the power one.

While I personally would never have a need for an EeeBox, I can understand how it will be handy for people. I don't think it's going to have the impact like the EeePC, but people are definitely going to like it and no doubt we're going to see clones come out that will offer better performance and more aggressive pricing as time goes on.

You really could pick at the EeeBox for hours as to all the things it can't do, but the bottom line is ASUS has designed it to do certain things and it manages to do them very well. With a range of colours and no doubt more models coming out in the near future, the chances are you're going to be able to find an EeeBox to not only suit your needs, but also your decor.

Like I've said so many times, the EeeBox isn't for everyone, but a $700 graphics card isn't for everyone either, nor is $1500 processors. The EeeBox has its market clearly pointed out and it manages to attack that very well. Really, though, if the EeeBox does kick off we're going to see more and more companies attack the genre with more power and cheaper prices. 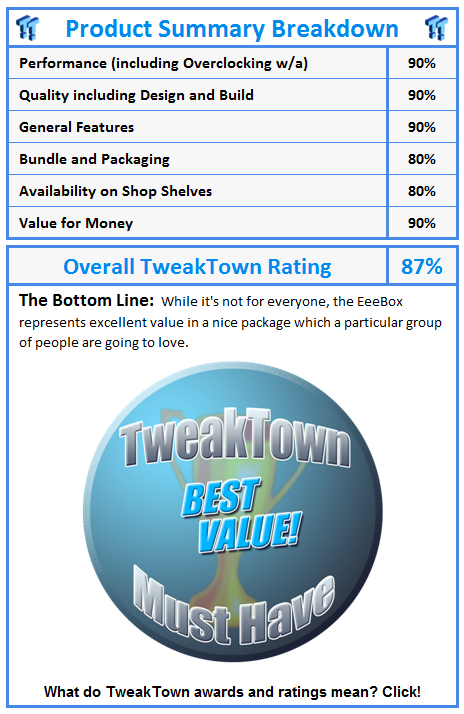