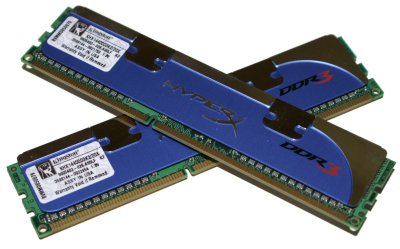 Update: Following this reviews publication, we were informed by Corsair that they have already had an 1800MHz XMP-ready 2GB kit available on the market for a year or so. Not only this, but their modules are rated with a latency of C7 whilst the Kingston modules are C8.

We apologise for not having realised this prior to this reviews uptime but felt it needed to be mentioned not only with respect to Corsair but also for our readers who we like to ensure are never misinformed.

Kingston is one of the big wigs when it comes to producing memory modules. Kingston HyperX memory modules have made some impressive strides; the DDR2 modules are amongst the highest quality out there. And with DDR3 showing clock frequencies up to the 2000MHz range now, Kingston is on the front line of clock power.

Intel has decided to move into the high performance market with its XMP or Extreme Memory Profile technology on their X38 and X48 chipsets, a derivative of the NVIDIA Extreme Performance Profiles. Basically, how this works is the memory is rated to do either 1600MHz or 1800MHz on an X38 or X48 chipset. The XMP data is written onto a separate EEPROM chip on the memory with improved timing data, voltage requirements and settings. When you select a XMP Profile, the modules tell the motherboards memory controller what latencies, voltage and bus speed to run at; the rest is history.

Today Kingston enters the XMP market with the highest clocked XMP kit we have seen thus far, that being 1800MHz. Let's see how it compares to our OCZ XMP 1600 modules. 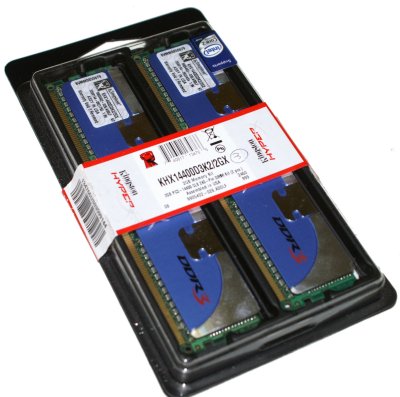 Kingston's choice of packaging is a solid black plastic back with a front clear plastic that has a special packing tape around it. This tape also has on the front the product code. Unfortunately, you do need a degree in rocket science to decode it. Since you can look directly at the modules, there is no need to have any pictures on the back of the case. 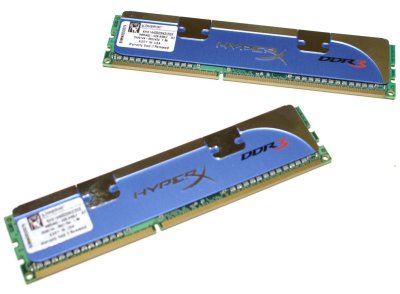 Removing the modules form the package, we get to have a look at them in the flesh. Kingston's HyperX heatspreaders remain unchanged. Kingston tries to keep a winning idea alive. The heatspreaders are held to the modules with double sided heat tape and metal tangs. 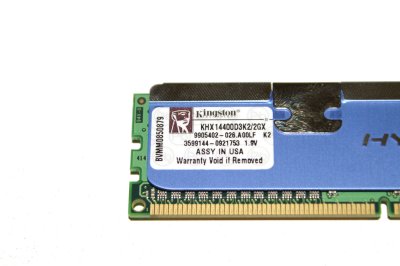 On one side of each module, Kingston puts the same data that is on the front of the package on the modules. Again, a degree in rocket science is needed to get by. To help you out, the modules are rated for 1800MHz with 8-8-8-24 timings at 1.9v.

Pushing into overclocking, we didn't find the modules really wanted to go much past 1800MHz; we got an extra 5 MHz out of the modules. While we moved the voltages up to 2.1v to get the 1805Mhz stable, it simply made the modules too hot.


With today's test system we move up to the GIGABYTE X48T-DQ6 motherboard, which is a reference X48 DDR3 board here at TweakTown. Today we have the OCZ XMP1600 modules here as comparison. For our stock clock settings we used 1333MHz which is the highest JEDEC standard for DDR3.

We then pushed the modules up to XMP 1600MHz and then cranked the Kingston up to XMP1800. The OCZ memory would not run at XMP1800 so we only managed to get the Kingston to this level for testing.

Latency wins here and at the same clocks speeds we see that the OCZ memory is able to get the lead. However, we see that when moving from 1600MHz to 1800MHz, the latency doesn't change much.

Lastly, we move into real world benchmarks and Crysis doesn't show any real advantage between 1600MHz and 1800MHz.

XMP technology is something that has helped Intel start the transition to DDR3. Like EPP, XMP managed to boost the performance of the memory modules, without the end users actually having to overclock, Even for the new users, XMPs overclocking function makes getting the most out of the memory a lot easier.

Kingston's DDR3 modules are extremely fast and while not the cheapest memory on the market, they are the fastest XMP rated modules available. So, if you're one to crave the fastest, these sticks are for you.

Showing that DDR3 has its place is good, as Nehalem (Core i7) will be DDR3 only and P45 is the last Intel chipset to have any DDR2 support. Plus, when AMDs AM3+ CPUs soon make an appearance, DDR2 is heading for the end of the road.

Update: Following this reviews publication, we were informed by Corsair that they have already had an 1800MHz XMP-ready 2GB kit available on the market for a year or so. Not only this, but their modules are rated with a latency of C7 whilst the Kingston modules are C8.

We apologise for not having realised this prior to this reviews uptime but felt it needed to be mentioned not only with respect to Corsair but also for our readers who we like to ensure are never misinformed. 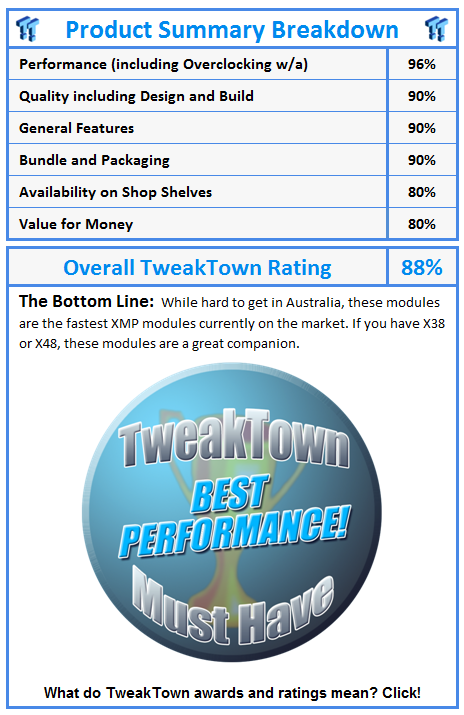