Now, phones aren't usually my forte, but when Samsung asked if I wanted to review their new MP3 spouting mini-boom box of a phone, I couldn't really say no. The real clincher was the Bang & Olufsen speakers embedded in the phone, which appealed to the audiophile in me. 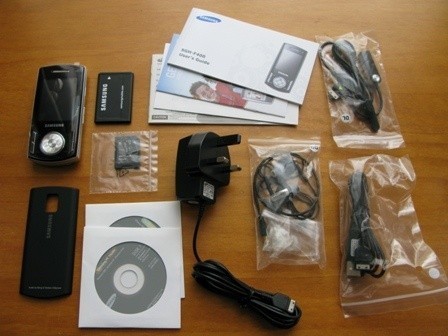 Unpacking it from its box, we can see that what the customer demands from a phone manufacturer these days is EVERYTHING. You get much more than just a charger and a little headset; with this phone we get a beefy looking set of headphones with in-line mic, data cable, software and a 1GB MicroSD card to boot. 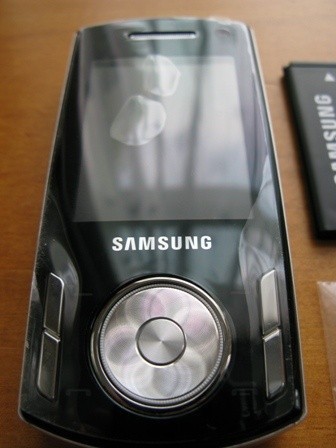 But enough waffle, here are the specs for the phone:

Taking a page from their Finnish competitors' product, we can see this phone slides both ways. Flip it up for an extended 15 button keypad, adding some extra buttons atop your standard 12 key pad to enhance the phone functionality and provide the user with more shortcuts. 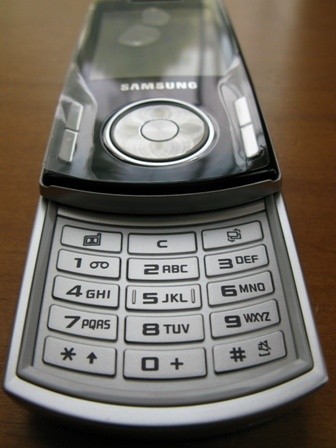 Slide it down and you reveal the two Bang & Olufsen driver units that pump out your tunes for all to hear. But thanks to some clever software jiggery pokery, you are presented with some menu options to launch the music/radio/video players, so there is less time spent fiddling around in the menu system.

Pump up the Bass

With the basic introduction over, it's time to load up some tunes.

There are a number of ways to get your music onto the phone, either using a card reader and dragging/dropping files straight on the card, using the connectivity cable to drag files into the directories like a memory stick or using Samsungs own media manager to set up playlists and manage folders. The final option is to use windows media player to manage the music. The device can be recognised as a portable device and thus you can synchronise playlists and drag and drop songs onto your phone. 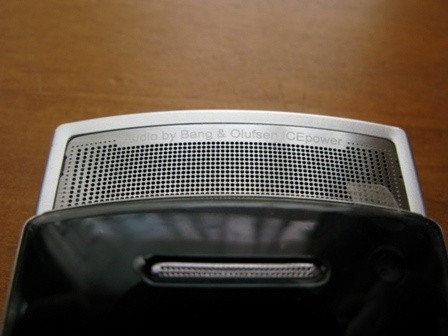 With the multitude of choices available, it's easy to find a method you like to get the tunes on your phone. The Microsoft fanatics have media player, the geeks have the file system access for drag and drop audio pleasure and everyone else can just use the software provided.

With our tunes loaded up, it's time to see what the speakers can do. Hands nervous and sweaty, I slide the phone down to reveal the Bang & Olufsen twins while the screen reveals its sexy media menu. 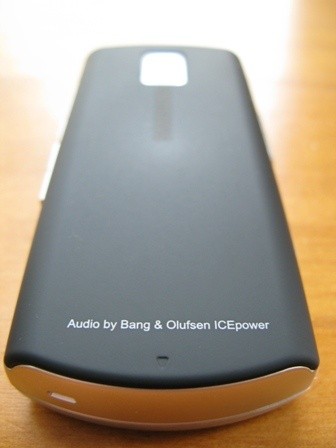 Picking a song at random from the list, it starts to play and the speakers deliver a good range for their size. Turning up the volume to max, the speakers produce a decent volume that means people up to about five meters away can hear what you're listening to clearly in a public place. 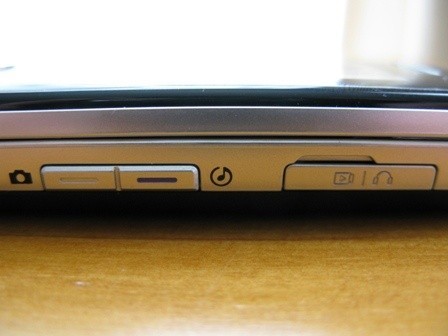 After playing a selection of songs and messing with the equaliser presets, I can conclude that the speakers are without a doubt powerful and clear all the way up to the limit of the volume control, with no distortion like you would get on most phones. 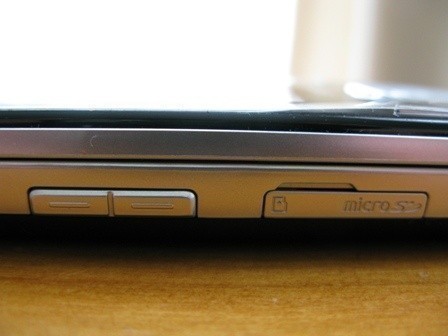 However, the speakers still lack any kind of bass to them which does no favours for the phone as a mini boom-box. This is not a fault of the components, however, but of the sheer physics of the situation; there is no way to fit a decent sized speaker into a phone without the inherent problems of power, volume, size and a large magnet.

With the speaker issues aside, there is always the headphone option to consider. The clever clogs at Samsung have done us all a major favour and installed a STANDARD 3.5mm jack socket for your headphones. 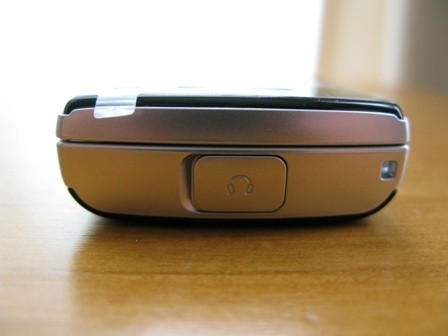 This means that you can take your favourite pair of cans and enjoy the tunes like it was a proper MP3 player in your pocket. They even have enough power to drive a serious set of DJ headphones that usually require a little more power to get the full range out of them.

The supplied headphones come with a set of different sized silicone fittings to make sure you get a good snug fit in your ears. They are surprisingly responsive and bassy headphones which are perfect for taking calls or just rocking out. 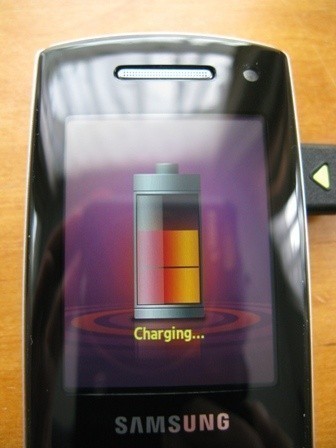 At this point I discovered yet another nifty feature of the Samsung software when playing a song or a playlist in the speakers up mode. Slide the phone closed and you will lock the phone, but the music continues to play with a mini player on the home screen of your phone. You maintain all the usual functionality like skipping tracks and play/pause. The great thing is its unobtrusiveness on the screen; it remains readable at the bottom without stealing screen retail or looking ugly. Bravo Samsung! 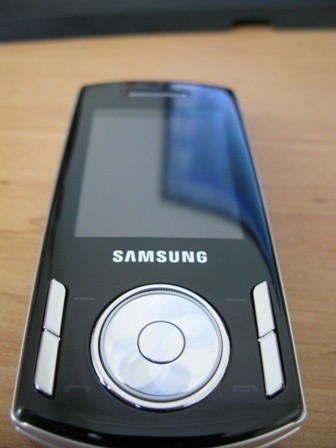 To sum up the music features of the phone, I would say that Samsung has really made an effort here with the F400 and the whole system feels more integrated than tacked on like some phones. The Bang & Olufsen speakers are a nice touch, but unfortunately I cannot see them being the next boom-box replacement due to the lack of bass.

Next, we shall look at the phone as it should be... a phone.

With the music aside, this phone boasts a full feature set, providing surfing, talking and texting. 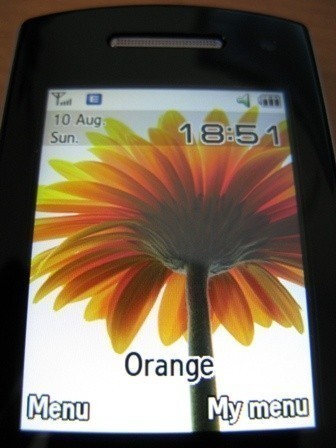 The texting is easy to do and the buttons maintain a solid click to them with good spacing, so fat fingered people like me don't mash the keypad in a vain attempt to tell your mother that you love her.

The only gripe about texting I found, and this can be easily fixed in a firmware upgrade, is there is no background sending. If you write and fire off a text message to someone and then close the phone while the sending bar is scrolling across the screen, it will cancel the send and store the message in the outbox for later sending. 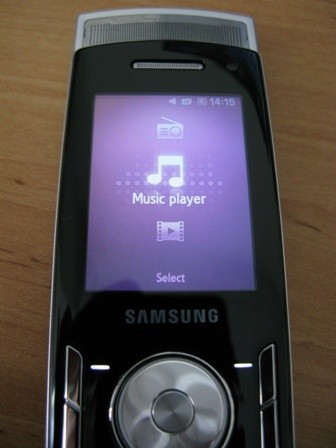 Phone conversations are clear and crisp with a good speaker and microphone in the unit. The phone book has some comprehensive features, but among the more notable and neatest is the ability to start typing in a number on your home screen and the phone book will suggest contacts based on recognition of the number being typed.

There's plenty of customisation available for this phone; I'm sure I haven't even explored all of it, too. There are so many ways to make the phone more suited to your needs, including lots of fancy options to change the colour schemes and skins of the menuing system. 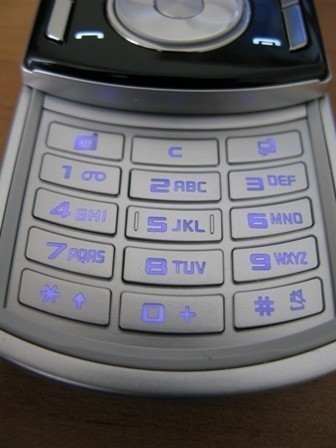 There is a series of applications included with the phone, too. These include an image editor, web browser, conversion tool and surprisingly an RSS feed tracker as well. No games on my model, however, it seems like they want this phone to give the impression of a life style tool and not a toy.

Wrapping this puppy up

A problem I encountered with browsing images stored on my miniSD card was that sometimes the phone would stall while accessing and producing thumbnails for the images. This can be solved again with a firmware upgrade, implementing tighter coding for the processor in the phone.

There is a resolution limit on the images on the phone, too. It refuses to open images that are too big, which on one hand is sensible but no where does it say what the limit of the image sizes should be, so it's trial and error to find out.

Reading other reviews of the phone, they mention that it feels very plasticy and very light. I can say this is true; the phone is very light for its size compared with the myriad of models out there now being made from steel and aluminium. But plastic maintains a better ability to absorb shocks; steel and aluminium may be more durable and less likely to crack, but they are stiffer and will deliver most of the shock to the internal components, making them likely to break.

The camera is a respectable 3-MPixel with a flash, not much to say about it other than checking out the clickable sample photos below. Camera access is done either by menu navigation of more sensibly by side button access. Flip the phone on its side and press the button and snap away like you have a camera in your hands. 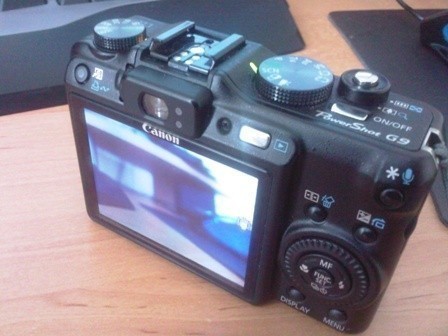 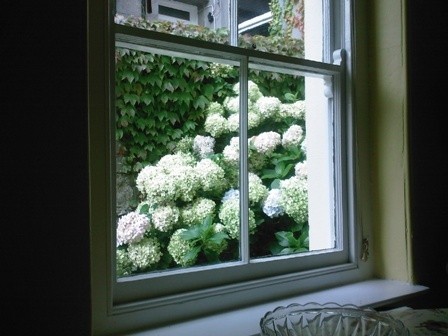 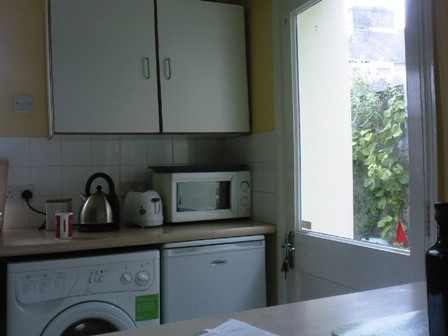 As a final note, I will say the battery life on this phone is great. I got well over a week on a single charge and that's with playing with menus and music all the while.

One suggestion I can make, though, is to lose the scroll wheel on the front. A d-pad will suffice while the scroll does nothing for the phones usability. 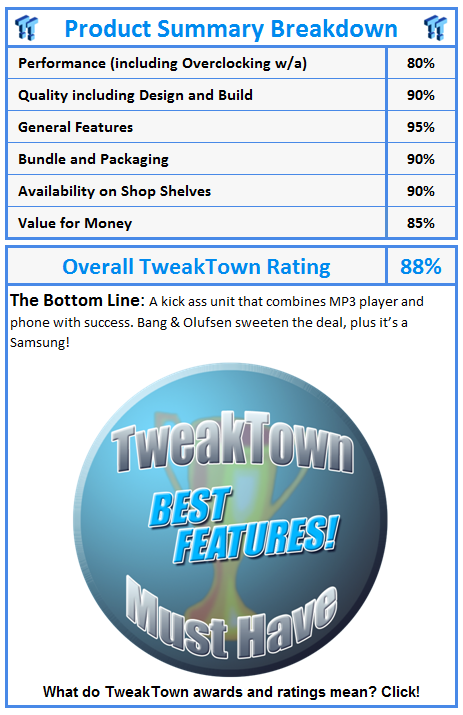