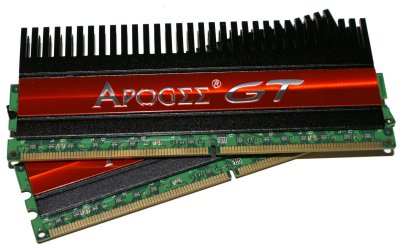 When we started working with Chaintech here at TweakTown, we were about 1-2 years into the life we now know as the hardware review industry. Chaintech jumped onboard as one of the hardware suppliers back then and their portfolio consisted only of motherboards. Not long into the relationship Chaintech started building graphics cards based on the Geforce 4 GPU and things started to expand from there.

Today Chaintech no longer has motherboards on its list; this sector died out a number of years ago. The only thing remaining on their portfolio from the good old days is their graphics cards, which now include the GeForce 9 series. Chaintech decided to branch out into a more cut throat field, that being memory. Chaintech now produces a range of memory under its APOGEE name, the same name that was used for its top of the line motherboards. How times change.

Today we have on offer the Chaintech APOGEE DDR2-1150 memory kit; let's see how it performs compared to our current test bed memory. 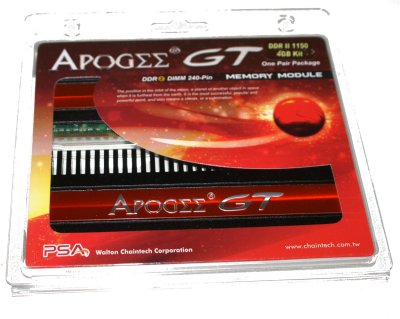 First off, we have a look at the package that the modules come shipped in. Chaintech has gone for a red and black colour scheme for the casing, which is a split-apart blister pack held together with staples, making it easy to remove the modules from the kit without slicing your hands open. Chaintech allows the modules to be shown through the front, negating the need for any pictures on the back. 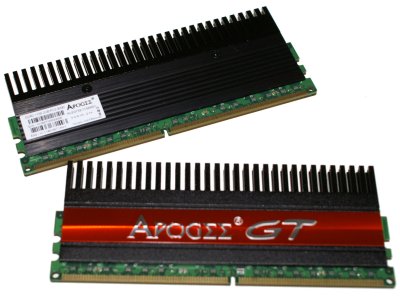 Removing the modules from the blister, we get the sense that Chaintech follows another memory manufacturer in their style and design. Looking at the modules on the desk, we get the feeling inspiration was from Corsairs DHX series of modules. The large heatspreader with fins at the top looks almost identical to our recient Dominator memory that was tested. Only the heatsink colour is different and whether or not the same PCB cooling is used or not remains to be seen, as we couldn't remove the heatsink. However, the design certainly looks the goods. 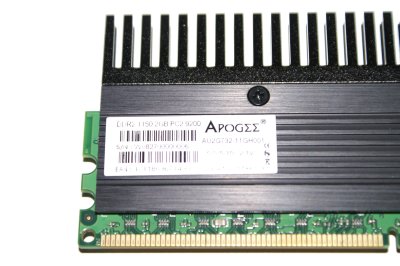 On one side of each of the modules is the production sticker that gives details on the memory specs. The kit we were supplied with was a DDR2 dual channel kit with 2x2GB (4GB total) memory that is rated for 1150MHz with a timing profile of 5-5-5-15, using 2.1v to achieve this.

When overclocking the modules we managed to just get them past 1150MHz, but only by 4MHz. A grand total of 1154MHz was achieved; we did this with the specified 2.1v. We tried with 2.2 and 2.3v on the memory, however nothing above 1154MHz was stable. We give Chaintech a hats off to getting it to the rated speed, with just an inch of extra room to spare.


Today we will be testing the X-Tune memory we recently reviewed from Aeneon along with our trusty Geil memory against the Chaintech APOGEE DDR2 modules. Our stock clock tests are done at DDR2-800 speeds, as this is the highest JEDEC speed recognised for both Intel and AMD. While Phenom does support DDR2-1066MHz memory, this isn't recognised for Intel, so 800MHz will do.

Our overclocking tests were done with the modules running a 1:2 memory ratio to try and keep the FSB and CPU out of being a limiting factor.

First on the list is Everest. It shows no discernable winner here between the three different kits. All have good performance for DDR2, especially when overclocked.

Latency and access times are the key here. All three kits run the same 5-5-5 timings so there are no winners here. None of the kits dropped down any further in the timings at overclocked settings, so it's very close yet again.

Pressing into real world gaming; all three kits perform the same here too, so there's no real difference between them.

DDR2 still hasn't died off, and even Intel is still a supporter of it. DDR3 may be the future, but the present still belongs to DDR2. AMD is still dependant on it for its AM2 and AM2+ processors as well. Intel P45 chipsets still have a DDR2 memory controller integrated and with the price of DDR2 vs. DDR3, it's still wiser to go for DDR2.

Chaintech APOGEE memory isn't anything spectacular compared to other brands, however it's not far behind the big names like Geil and Aeneon. So when it comes to choosing what you're going to buy, Chaintech is something we would recommend to anyone looking for high performance DDR2 memory. The only downside is that here in Australia it may be quite difficult to locate, though you won't find too much of a problem getting it in the states. 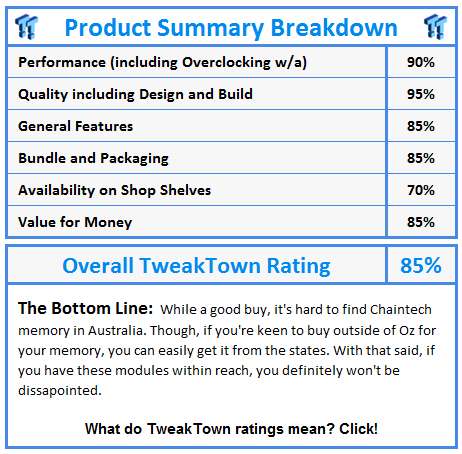