The KVM is one of those devices that I've always known about, but never actually used. As far as brands go, ATEN is definitely up there in the world of awareness, so they seemed like the logical company to check out.

The KVM, as a device isn't all that confusing; it simply let's you use two or more (depending on the model) computers while only needing a single Keyboard, Video (Screen) and Mouse - or KVM.

Over the past 18 months, I would have liked to have ventured into the world that is the KVM, but since my upgrade to Dual-Link DVI enabled monitors, it hasn't been possible as the DVI side of things on all KVMs only support a maximum of 1920 x 1200; until now, that is!

ATEN have come to the rescue with the release of the CS1782 a few months back. It was really the only KVM released within the past few years that managed to grab my attention, so I simply had to have it.

Before we get into talking about the overall feelings on the device, let's take the time to have a quick look at the package and what's inside.

The front of the box is actually very informative when it comes to knowing what exactly you're dealing with. Across the top we have the brand, ATEN in this case. The other end makes note of its Dual-Link DVI compatibility. Below that, we have a picture of the front and back of the unit. 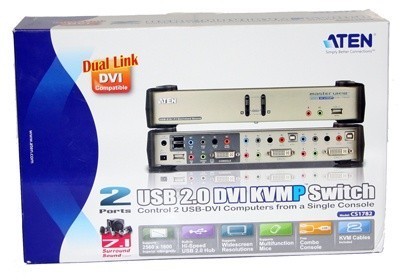 Heading towards the bottom half of the box, we have mention of some of the main features; again, the fact it supports 2560 x 1600, widescreen resolutions, support for 7.1 surround sound, the inclusion of KVM cables and more. 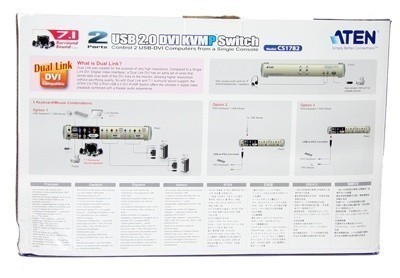 Turning to the back of the box, we have a bit of a description on what exactly Dual-Link DVI is along with an explanation on all the ports and how you would make use of them. The box really is half marketing and half instruction manual; it's the closest thing to reading instructions I've done over the past few years.

Moving inside the package, you're obviously greeted by a multitude of cables that help you get the device setup. 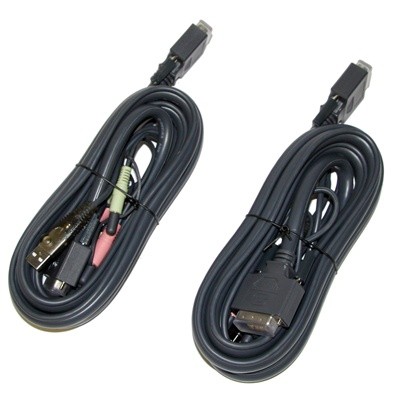 First up, we have our main set of cables which include a DVI connection, microphone and stereo audio port along with a USB port on each side. This is the main cable that is needed to help the KVM speak to the other PCs. 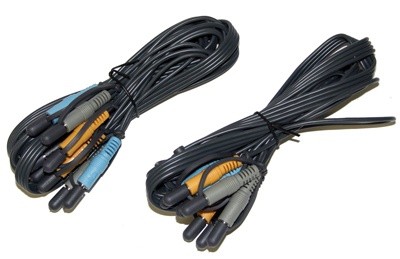 Next, if you want to move up from stereo to 5.1 or 7.1, we have all the other audio jacks and colours needed that go between the KVM and your PCs sound card. 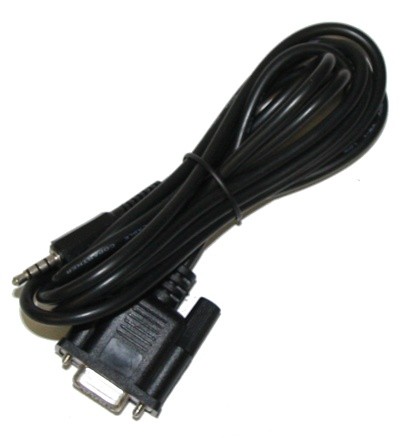 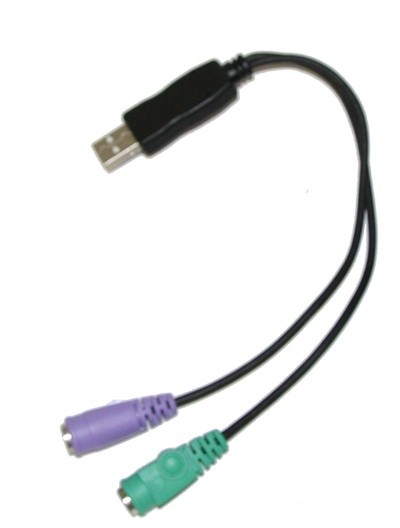 Also included is a cable that lets you update the firmware on the unit along with a dual PS/2 to USB convertor which is necessary if one or both of your devices use PS/2. Though, if you are still using PS/2, you are living in the dark ages and it's probably time for an upgrade. 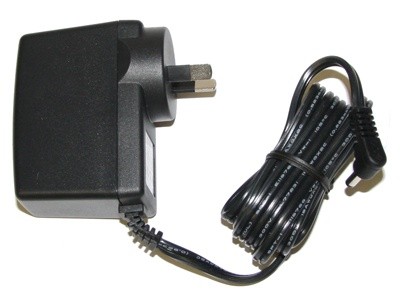 The last item in the cable bunch is a power adapter that is needed to use the KVM. 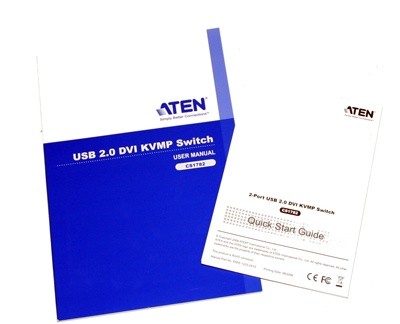 Also included in the package is a manual and quick start guide to help you get up and running as soon as possible.

With the cables out of the way, it's time to move onto the device. Pulling it out of the box, you notice the length of the unit alongside its overall weight. Looking at the front of the unit, we have the brand again mentioned to the left and below that there is mention of the fact it supports USB 2.0 and surround sound.

The middle of the unit has our two switches which let us switch between our systems in both video only or video and USB.

To the right of the unit, we have the model and below that a USB port and two audio jacks; one being a Mic and the other a stereo jack.

Flipping the unit to the back, we're greeted by an absolute bucket load of connectors. The very left of the device has our firmware upgrade port, power connector and a single USB port.

Next to that we have our main connection where your monitor, keyboard, mouse and sound setup plug into.

Sitting next to that, we have where our main set of KVM cables plug into. Here you plug in your DVI connectors, USB cable and audio cables that then go towards the PCs where they plug into the respective sections.

Setting up the device is all very self explanatory and it's really quite difficult to mess up. Once everything was plugged in and the power connected, it was time to fire up PC number one.

Within seconds, our Dell 30" little blue light turned on and showed us our boot up. Everything was looking good at this stage. Inside windows, we get some finding new devices bubbles show up and before long we're cruising around our desktop at 2560 x 1600.

With the second computer plugged in, it was time to fire up that bad boy. Wwitching the KVM over to its second source and powering up our machine, we were again greeted with that lovely blue light and boot up screen.

Everything was going along smoothly until we got into Windows. Now, I'm not a fan of admitting it, but I have a blonde moment every once and a while. This was one of them. Since like most males I'm too much of a man to read the manual, in Windows I was having no joy getting the mouse to work. The keyboard was fine, but unfortunately not the mouse.

I figured it had something to do with the USB link at the front of the KVM not being lit for source two. After about 15 minutes of going under my desk and checking that the USB was all connected and changing ports around, I found myself looking back at the KVM. Within another 5 minutes I discovered that if you press the source just quickly, the video will swap over. If you hold it down for a little longer, though, the video and the USB link will move across. Lesson learned and the CS1782 was now running like an absolute dream.

Apart from the fact that I felt I was too manly to read the manual, the whole setup procedure was easy from opening the box, getting the necessary cables and plugging everything in.

The other thing that I have to note about the unit is the quality; I really expected nothing more than a cheap plastic casing, but the decision to go metal just adds a whole new level of quality to the unit. The whole device not only looks great, but feels fantastic.

It's kind of difficult to fault a device that does exactly what it's supposed to. ATEN have really covered all bases by adding full 7.1 surround sound support and Dual-Link DVI connectivity.

While the unit isn't exactly cheap, the price is extremely justified thanks to the overall quality of the unit. The other thing you have to consider is the fact that you're not going to get another 30" monitor for the price of this unit.

With all that said, the ATEN CS1782 really is just a top notch product that a lot of multi computer users with 30" monitors are going to find handy. This is just one of those products that does what it's supposed to do and does it extremely well. 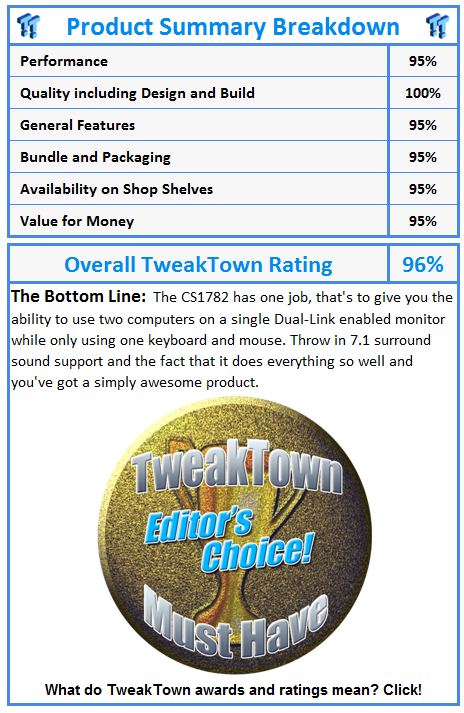