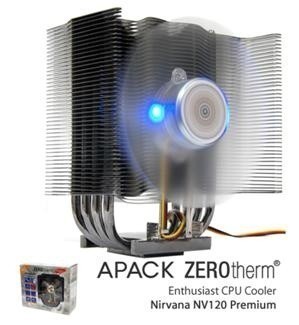 Even though ZEROtherm doesn't have a long history of enthusiast products, their quality has impressed me thus far. The Hurricane HC92 won an award in our Mega 9-way VGA cooler roundup back in April. And their latest product, the ZEN FZ 120 proved to be a great performer with the added benefit of costing less than enthusiast CPU coolers. Today we will be looking at ZEROtherm's flagship cooler; the Nirvana NV120 Premium.

The Nirvana has a small price premium over the ZEN; around 10 Dollars here in the States. Newegg currently lists the ZEN with a 10 Dollar mail-in rebate which negates the price difference. It will be interesting to see if and how much better the Premium cooler performs compared to the newer ZEN 120 that we reviewed last month.

Enough with the history; let's dive right in and look at the specifications and work our way to the performance numbers that we are all so eager to see. 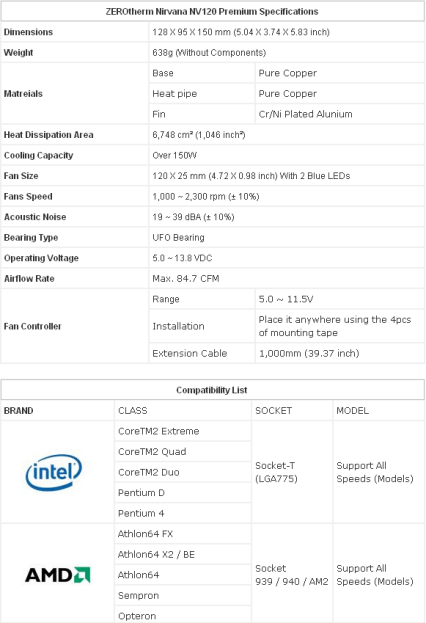 The ZEROtherm Nirvana NV120 seems to have hit all of the right buzzwords and then some. The cooler uses a 120 x 25mm, blue LED fan that is capable of producing 84.7 CFM at 2,300 RPMs. ZEROtherm claims the fan can hit 39dBA at full speed, so don't look for the fan to be ultra quiet. But to be honest, enthusiast coolers such as the Nirvana are not made for home theater systems. Our testing will show where the fan stands in comparison to other enthusiast coolers.

The base and heat pipes of the cooler are made of copper and should provide a great amount of thermal conductivity. The fins are nickel coated aluminum giving off the gunmetal look. The fins are arranged in a honeycomb style, staggered for better thermal relief.

ZEROtherm lists all of the possible CPU combinations for both AMD and Intel coolers. Since the cooler is listed as being able to dissipate over 150 watts, you wouldn't have a problem cooling the latest and greatest from both AMD and Intel. Overclocking should also not be an issue from either company, even though the Phenom can approach 150 watts when overclocked past 3.0 GHz.

After a quick look around, I was able to find the Nirvana NV120 Premium for 50 Dollars with a 10 Dollar mail-in rebate, making the total cost right around 40. The lowest price I found on PriceGrabber was actually 59.99 without the rebate. The lower price actually takes the cooler down from the privileged enthusiast class and drops it into the enthusiast entry level. We have seen new coolers offered in this area recently; mainly the new core contact coolers from Sunbeamtech and SilenX. ZEROtherm is no stranger to the 40 Dollar market; the ZEN 120 is a strong player here as well. 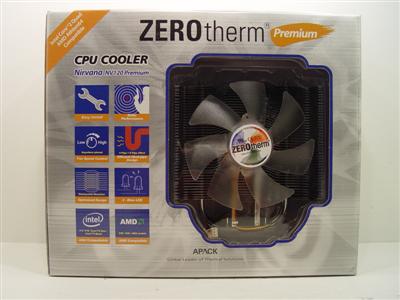 The package art for the Nirvana is a grey and off-white colour, but the real story is the information given and how easy it is to find when browsing on the store floor. On the front it shows that the cooler is both AMD and Intel capable. A few other features are listed on the front, which make it easy to choose the cooler over some of the others sitting on the shelf. 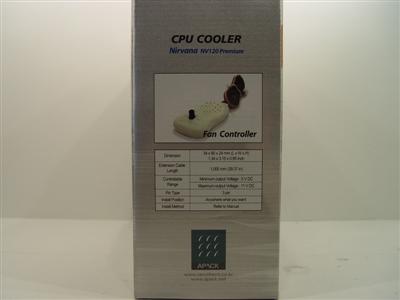 The side shows some general information about the cooler and has an image of the included fan speed controller that is also packaged with the cooler. 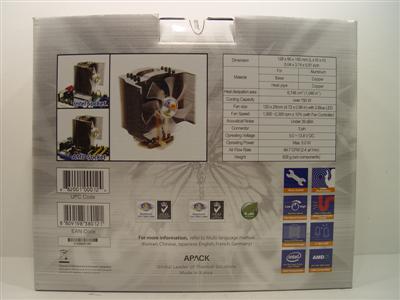 The back of the box has product images of the cooler on a pair of motherboards, more specifications and more features. 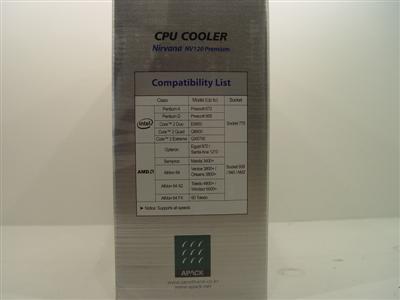 The other side of the box shows the CPU compatibility list. 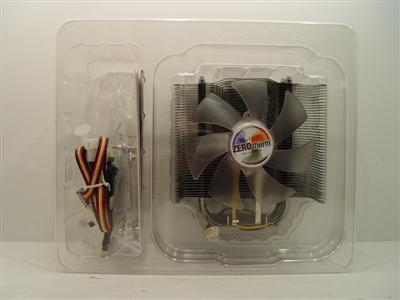 The internal packaging is very good; the cooler isn't going to slide around during transport and the accessories are housed in a separate area. This is important, no one likes to get a new cooler home only to find that the fins are bent all over the place. 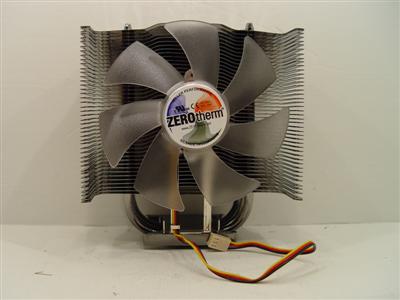 Here we see the cooler from the front fan side. As you can see, the fan doesn't have a shroud so you will want to be sure not to route cables close to the cooler. The fan cable length is around 7 inches so you may want to wrap it around the cooler a little to keep the extra out of the way. 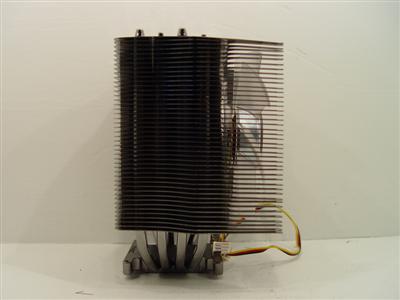 The fins go all the way out past the edge of the fan on the side. This allows more surface area and takes advantage of air passing on the outer edges of the fan. 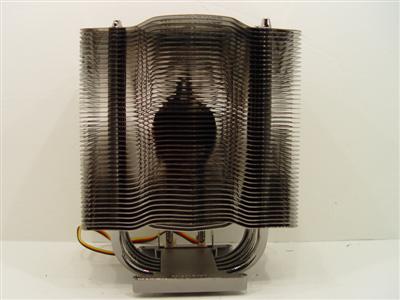 On the back side we see that the fins are longer than the overall width of the cooler. By giving the fins bubble in the middle, the cooler has more surface area that should equal great cooling capacity. 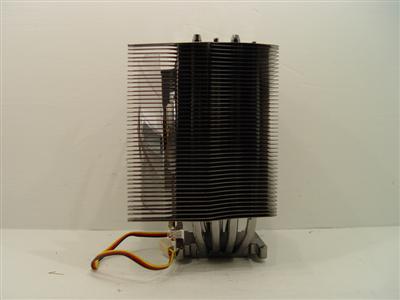 The copper heatpipes of the Nirvana are with a finish so they do not tarnish. As you can see, the cooler uses four in total and they route from the base of the cooler past the fin area. At the base the heatpipes are sandwiched between the copper CPU contact base and the coolers mounting system. 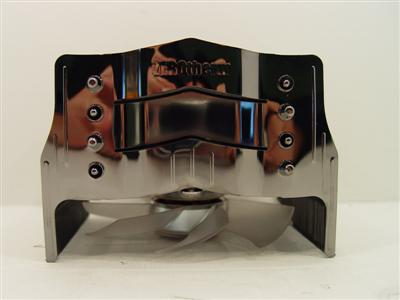 From the top we see the nickel finish of the aluminum fins. This adds a little pizzazz if you have a window on your case. 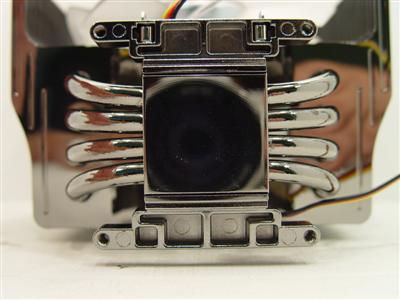 The Nirvana's base is made of copper like the heatpipes and is also coated. As you can see, the base has a near mirror finish but it is possible to see a few machine marks. 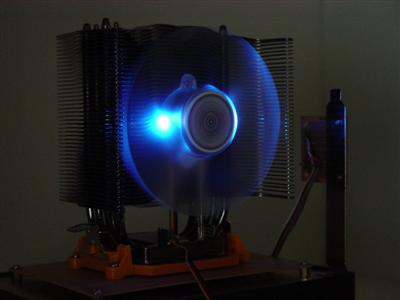 Once installed and powered on, the fan illuminates the entire area with its two blue LEDs. 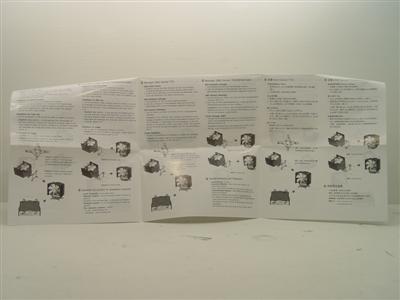 Documentation for the cooler is very good. As you can see, the manual is written in several different languages and includes images for installing the cooler on both AMD and Intel processor based motherboards. 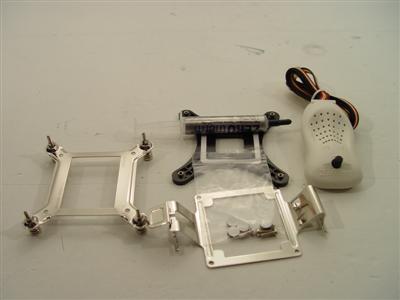 The accessories package is spot on; choose either an AMD or Intel bracket. For Intel motherboards you will need to remove the motherboard to install a bracket that goes on the back of the board, and for AMD you simply mount the cooler to a traditional AMD mounting base.

ZEROtherm included a couple of additional accessory items; a large tube of their premium thermal paste and a handy fan controller. 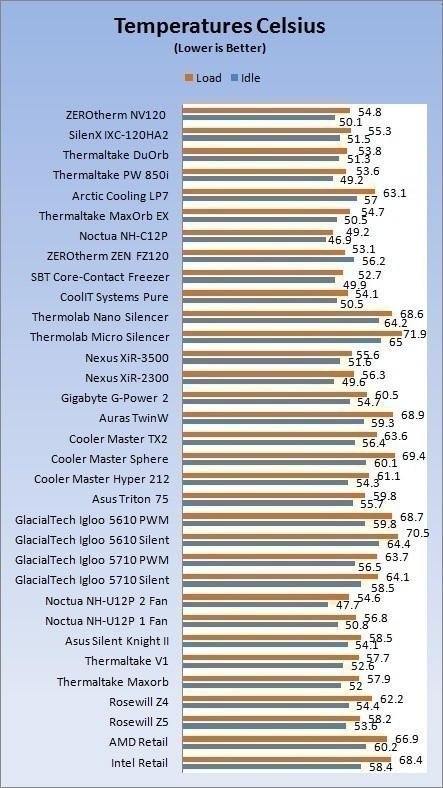 I was honestly expecting the Nirvana NV120 to perform a little better in this test. Don't get me wrong, the cooler is a beast when it comes to cooling but the newer ZEN gave us a little better performance. 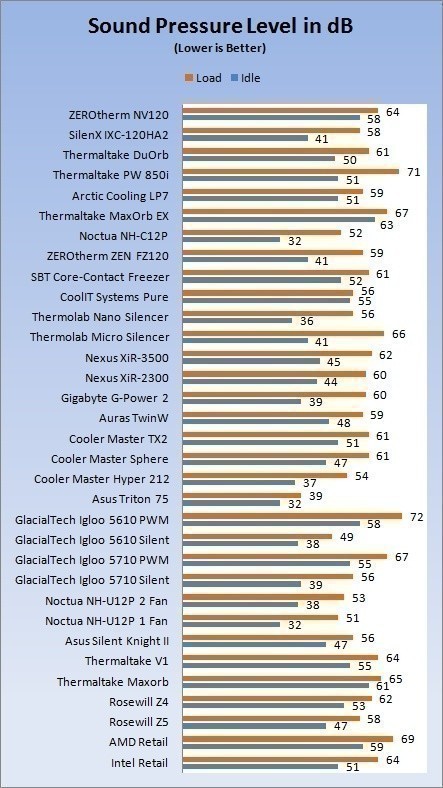 At idle the Nirvana is quiet, but not silent. Once you start getting into load voltages the fan comes alive and it only gets louder from there. The noise isn't a high pitched whine, but more of a lower mid-range roll; just a little higher pitched than a rumble. The sound isn't that annoying, but you will definitely know it is there.

If this article was a benchmark on build quality, I would put the ZEROtherm Nirvana NV120 Premium near the top of the list. Unfortunately build quality is not the only measurement of a good CPU cooler and that leads us to the shortcomings of the NV120.

The first thing most consumers look at when considering a CPU cooler is price. This doesn't play well with the Nirvana since it costs more than the ZEROtherm ZEN 120 before the rebate and the Sunbeamtech Core Contact Freezer; our 40 Dollar performance leader.

Performance wise, you can't go wrong with the Nirvana NV120 Premium, but that can be said about a couple of coolers in this price range. The extras, such as the fan controller and premium thermal paste help sway us to ZEROtherm, but if it were my money it would go for the ZEN and not the Nirvana.

Speaking of fan controllers, you are going to want to play around with yours after installing the Nirvana NV120. The fan is capable of dishing out a hum that you can hear across the room when run at full speed. Luckily, motherboards onboard sensors and fan adjustments are getting better, so as long as you set your BIOS up properly you can pass on using the fan controller and turn full fan speed control over to your motherboard.

The ZEROtherm Nirvana NV120 Premium is a mixed bag. Good cooling performance vs. poor acoustics vs. a little higher cost. The 40-50 Dollar market is filled with several great coolers that will satisfy most enthusiasts' needs. Recommending the Nirvana NV120 over the ZEN 120 or Core-Contact Cooler is just not an option unless it comes down to availability. The NV120 is a really good cooler, but there are better available. 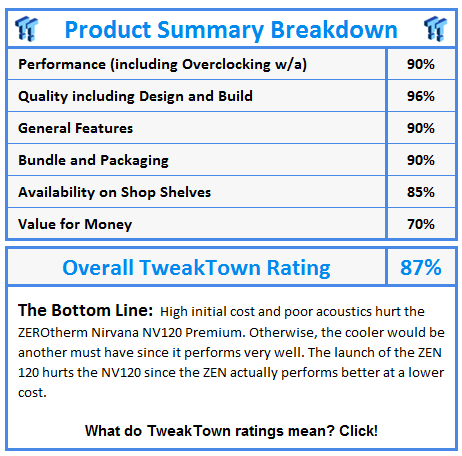