NewsReviewsArticlesGuidesGamingAsk the ExpertsNewsletterForums
TV, Movies & Home Theatre
Blu-ray Movies
One of the more critically maligned blockbusters from recent years, 'I Am Legend' hits home video with slightly lowered expectations. Whilst I missed the film in cinemas, I'm happy to report that I found the film far less troublesome than I anticipated, but that's not to say it does not have problems.

The films opening immediately piqued my interest, being especially personal to myself. It seems that in the year 2009, scientists have cured cancer, with all human testing finding success. Invariably something goes wrong because flash forward three years and humankind is all but decimated. New York City is overgrown with foliage and wildlife roam free.

But there is one man alive, Dr. Robert Neville (Will Smith) and his canine companion, who spends his days searching frantically for a cure to the disease, whilst remaining sane in a world with no human contact...and fighting off the infected 'dark seekers' whom roam after dark.

The unraveling of the disease in 2009 unfolds throughout the film, by the flashbacks of Neville. It keeps the viewer interested in the proceedings. In conjunction with the very real performance by Will Smith, they present the strongest aspects of the film. What is not so strong is the execution of the dark seekers; the undead victims of the cure. Coupled with their computer generated nature and the somewhat uncertain motives they employ, they unfortunately undermine what could have been a stellar film.

Of note is that this Blu-ray comes with two versions of the film; the original theatrical release and an alternate version (via seamless branching) which boasts a 'controversial ending'. Many critics (and myself to a certain degree) did find issue with the conclusion of the film and whilst I did not find it an overly satisfying conclusion, it pales in comparison to the alternate versions ending, which, had it been released to cinemas, would have been an utter debacle. 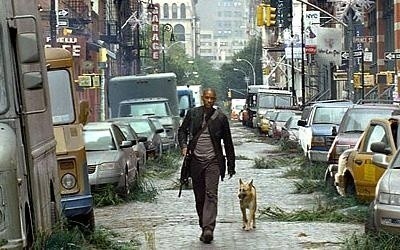 I Am Legend is presented in the widescreen scope aspect ratio of 2.35:1.

This Australian version disc released by Village Roadshow is a carbon copy of the U.S. version released by Warner. As such, the disc is encoded with VC-1 compression, at a fairly conservative bitrate as per Warner Brothers former habit of producing just one encode to satisfy HD-DVD and Blu-ray.

Whilst the lower bitrate did not introduce any overt issues this time around, I was on the look out for minor issues, such as banding (which I found a few times). Do not, however, confuse occasional, intentional CG motion blur for loss of resolution.

From the outset, I Am Legend shows a huge amount of detail, establishing a very crisp and defined image. For a film of such recent vintage, it's no surprise that the image is free of artifacts and grain.

For a film of this nature, there is far more action in the light than shrouded in darkness. As such, it really gives the transfer an opportunity to impress, with warm and vibrant colours, and helps the viewer settle into a more realistic tone. 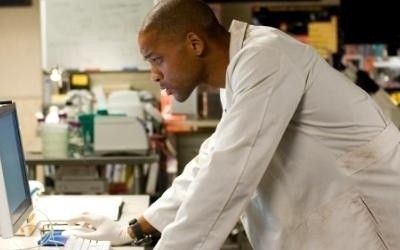 From the opening scenes of Smiths character tearing around the desolated New York in the GT 500, I knew I was in for a sonic delight and I wasn't disappointed. It's a pretty aggressive and full blooded mix, with a very active low frequency track.

The track is almost perfectly balanced between atmosphere, sound effects vocals and music. Without doubt this is one of the best overall soundtrack mixes I have heard for some time. The Blu-ray presentation is superlative and could only be bettered had it been presented at 24 bit instead of 16.

It was also a nice touch, for a movie of this genre, that the audio track is used to build panic and does not stoop to employ cheap volume induced startles. 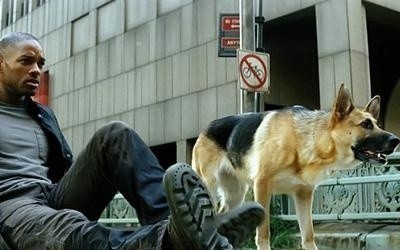 As I mentioned earlier, being a direct copy of the U.S. version of the disc, we receive everything from that version. Whilst it's not an avalanche of features, what we have is mostly of substance. Let's jump in.

First up is the 22 minute 'Cautionary Tale: The Science of I Am Legend' featurette, which takes the time to discuss with virologists and scientists how the story is steeped more in possibility than we would like to think. It takes a fairly interesting look at the history of epidemic breakouts, especially the Avian Flu which has been in the news for some time now. Definitely some food for thought contained within, and it's nice to see that the filmmakers took the time to discuss with those in the know to ground the film in a little more realism.

Next up is the near hour long 'Creating I Am Legend' documentary, which is a more standard making of fare. There are some great stories contained within and I found it thoroughly fascinating to see the process of converting the real New York City into the barren wasteland we see in the film. However, if you don't like spoiling the Hollywood magic though, best to stay clear.

Lastly we have a collection of four short animated comics, whose inclusion is slightly dubious. I suspect these might have been designed to hit the web to advertise the film, but I can't recall seeing them anywhere else.

If I had to complain about something, I would have to say I was disappointed by the lack of the original theatrical trailers. They were some very well crafted trailers that showed just enough to grab interest. 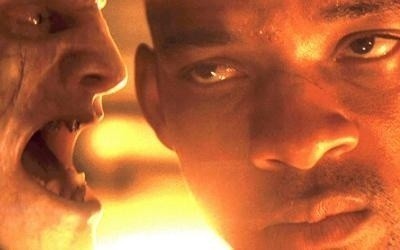 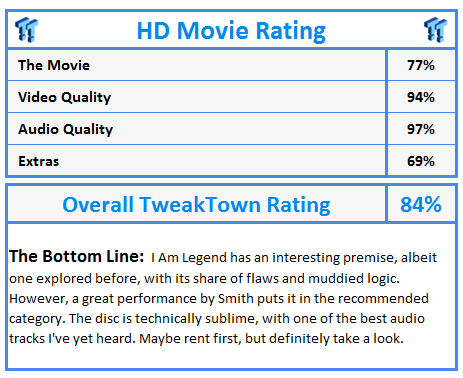