NewsReviewsArticlesGuidesGamingAsk the ExpertsNewsletterForums
TV, Movies & Home Theatre
Blu-ray Movies
Enchanted is an amalgam of Disney princess movies such as Cinderella and Sleeping Beauty, except the twist is that the majority of the film is live action. Enchanted also marks Disney's first, uncertain steps towards full animation production since 2003s Farmyard.

When Princess Giselle is banished to the real world of New York City, knowing only that she has to find her Prince, her naivety leads her to one disaster after another. Fortunately for her, a few animated maxims still apply to the real world, such as summoning wild animals in song (with a twist, of course). One joke involving the production of clothing is so inspired, it works twice. What she doesn't bank on however, is that the Prince may not be her one true love.

Enchanted is hands down, the best family oriented film I have seen for some time - possibly ever. It's so innocent in its intentions, and pulled off completely by the cast, without coming off too pulpy sweet. You can't help but fall in love with Giselle (which is more sociably acceptable than falling in love with Ariel from The Little Mermaid - guilty) and you totally accept that she is a fish, not only out of water, but from another dimension.

As a side note, viewers watching Enchanted on a PlayStation 3 might notice the small icon identifying the title of the movie along with a small picture, which shows up on the Xcross Media Bar. It's a small touch, but a great one, and it's the first disc from Disney to do so. I also noticed that Warner Bros. support it (on the import copy of V For Vendetta), along with Sony Pictures, whom have supported this for some time, so it would be good to get all studios on board with this. 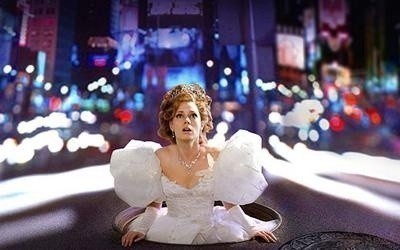 Presented in the wide aspect ratio of 2.35:1, encoded in MPEG AVC, we have another newly produced film which looks as good as you would be rightly expect, then jumps up to that next tier of awesomeness.

The image is incredibly sharp at all times. Colours are full and brilliant. Often at times the image presents itself as three dimensional, with a very deep field of focus. I saw no evidence of film artifacts and certainly no film to video artifacts.

For all intents and purposes this is a superlative, perfect presentation. 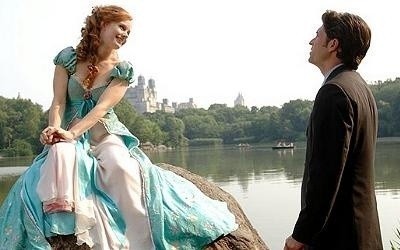 The sole English audio track on the disc is Dolby TrueHD at 24 bits. The box advertised PCM audio track is nowhere to be seen (and also not on the U.S. version).

Whilst the subject matter does not lend itself automatically to sonic bombast, the audio track is highly engrossing and eases the viewer into the world, not hammering it over our heads, but gently immersing us into a believable soundscape.

The two songs are mixed nicely into the proceedings, and the films' climax calls on the mix to be more a little more aggressive, without jolting the viewer.

Top marks to Disney for continuing their practice of lossless audio for all releases. It's also great to see musical oriented films free of PAL videos' inherit issue of playing back at four percent faster, which occurs on the DVD release. 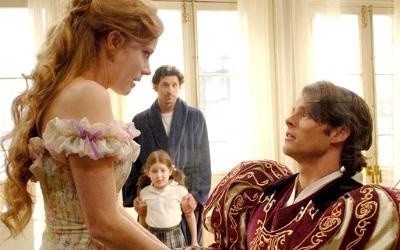 The main featurette , split into three parts, entitled Fantasy Comes To Life takes a speedy look at three specific parts of production, rather than serve as an all encompassing 'making of'. The first segment is the best, showing the production of the main musical number replete with animals, both CG and real.

Director Kevin Lima introduces six Deleted Scenes running a total scant eight minutes (including introductions). With such a short running time, there are no revelatory cuts shown here, just a few trims which would have served to pad out the films' running time.

The Blooper Reel is short but sweet. I would have loved to have seen the cast drop some 'f' bombs, but alas it was not to be.

Next up, we have a BD Java enhanced The D-Files game, which plays the entire movie and mixes in some trivia based questions to earn points. I like how Disney continue to push the Blu-ray medium, and utilise BD Java in ways that others are yet to. I still can't get into these games. Still, I am not the target audience - this is just not for me.

Pip's Predicament is a six minute featurette, based on the animated adventures of Giselle and the Prince. Again, not for me.

Disney love their Music Videos and Enchanted doesn't buck the trend. Here we have 'Ever, Ever After' by a Miss Carrie Underwood. Meh. 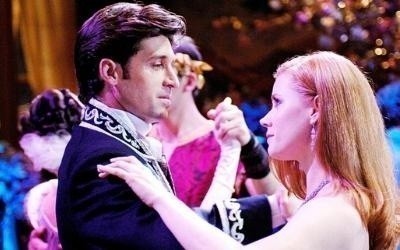 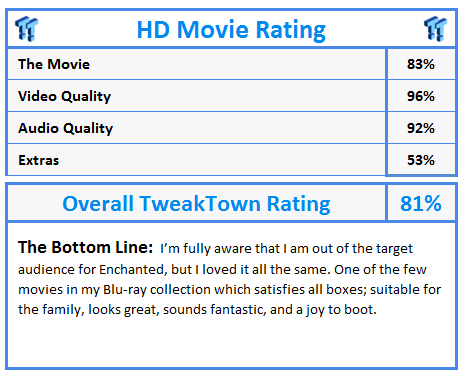