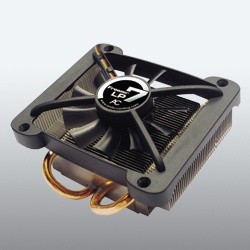 In the past we looked at several small HTPC inspired coolers and walked away from all of them dissatisfied with the performance they achieved. Some of the coolers were outright dangerous for the applications claimed by the manufacturer and we needed to make it clear that such a small cooler was not really intended for flagship, "Extreme" processors.

Arctic Cooling has stepped up to the plate to deliver us a silent performer that is made exclusively for the Intel LGA platform, and can apparently cool a 90 watt processor. The new Arctic Cooling Freezer 7 LP is designed for slim enclosures where limited height is a concern; many slim HTPC systems and home built 2U servers including NAS servers coming to mind. This is a market that is dominated by OEM coolers and many enthusiasts do not have access to these custom coolers, yet still find that the retail Intel heatsink makes too much noise for their application.

The new Arctic Cooling Freezer 7 LP is not designed to break any performance records, but it should allow HTPC owners the opportunity to get leading class performance. Let's take a look and see just how good a slim cooler can perform. 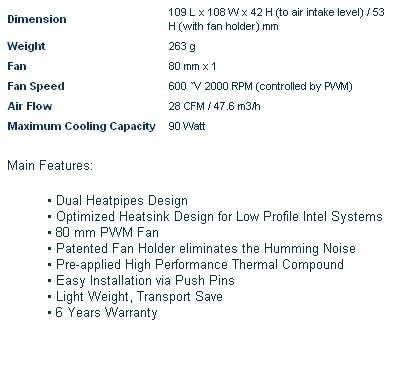 As stated previously, the Freezer 7 LP is an Intel only solution so AMD users are out of luck for this round. The 7 LP is a very small cooler, only 53mm tall with the fan installed. This is not quite small enough to use in a 1U server case, but 2U and larger cases will work with the 7 LP.

The 80mm fan used with the cooler is a 4-pin PWM design that will raise its speed to 2000 RPM when the temperature reaches a set point, and can go as low as 600 RPM when everything is cool inside the case. The fan can push as much as 28 CFM at full speed.

Arctic Cooling has listed the MSRP for the Freezer 7 LP at 27.95 US Dollars. This is around the same price point we see other similar products listed. Arctic Cooling products are available at many retail and e-tail locations so finding a unit shouldn't be a problem. 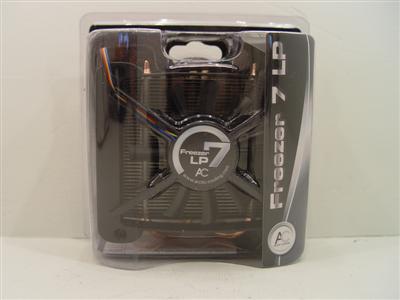 The packaging of the Freezer 7 LP is simple to help reduce cost. You can see the product through the clear plastic casing and the product name is listed directly on the front side. 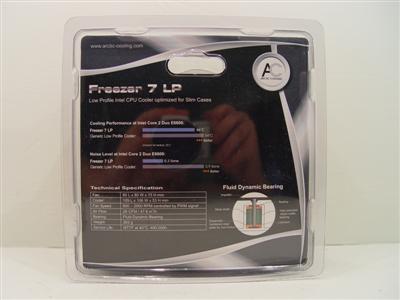 The back side of the packaging shows some generic performance numbers and the specifications for the cooler. 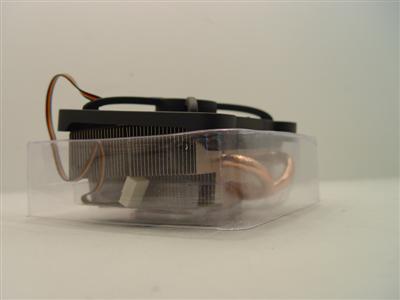 Once opened, the cooler is held in place with another plastic casing. 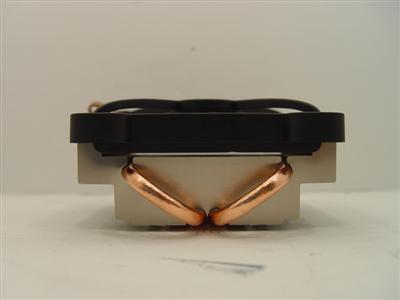 The Freezer 7 LP is a dual heatpipe design that pulls heat from the CPU and moves it to the outer edges, allowing the entire fin surface to cool the processor. Heat remaining just above the heatpipes radiates up through the center fins and is then carried away. 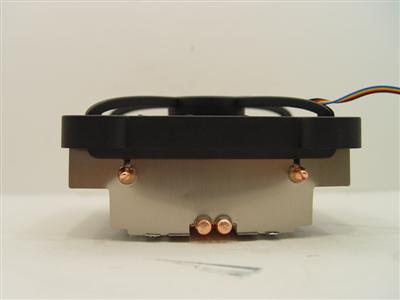 In this image you can see how the heatpipes work to move heat around the heatsink. 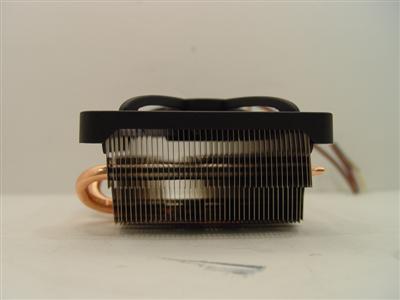 The fins have a little more distance between them than some of the other coolers we have looked at recently. This allows a fan that pushes less air to effectively cool the fins. 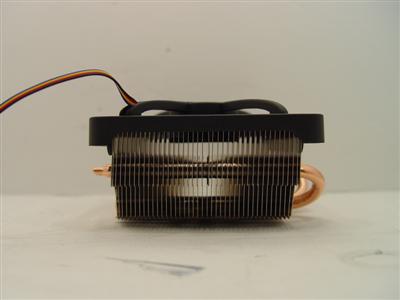 The fan just rests on the top of the cooler with the shroud and the shroud screws into the mounting pieces. This eliminates vibrations from travelling through the cooler and the fins echoing the noise. 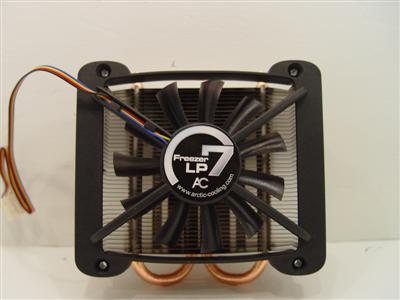 Here is a better look at the fan and shroud. Notice the holes on the outside of the shroud? This is where the long screws go through to mount the cooler to the motherboard. 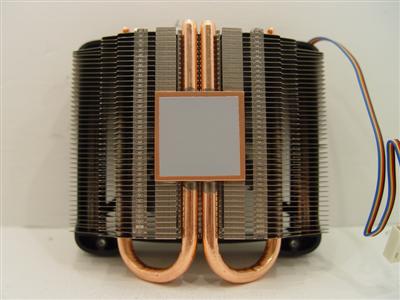 The cooler comes with thermalpaste applied to the heatsink from the factory. 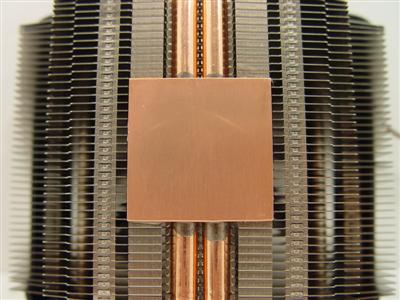 With the paste removed, we can see the base of the cooler. There are light machine marks on the base but everything is smooth to the touch. 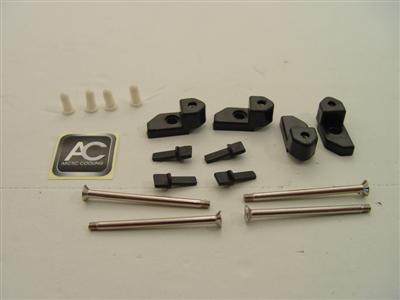 The mounting hardware is very simple once you figure out what is going on with it. Without removing the motherboard from the case, you simply use the white push pins to mount the black hold downs. The black push pins tighten everything to the motherboard and then you simply screw in the heatsink on top of it all. It isn't as elegant as some of the other Intel mounting systems, but it does work very well. 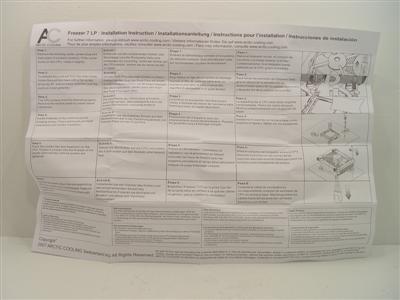 I found the manual a little lacking. Everything was spelled out as far as the installation but there should have been more images to help new users along. 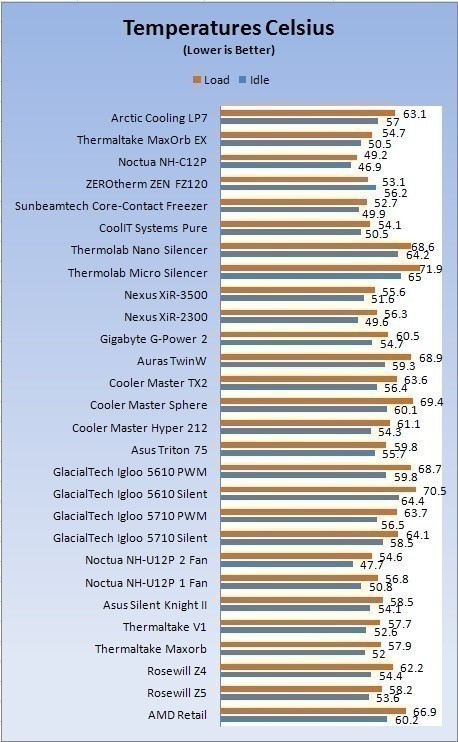 We were not expecting the Arctic Cooling Freezer 7 LP to break any records, and the performance is just about what we expected. Direct competitors to the 7 LP are the Thermolab coolers, and the four Glacialtach coolers. 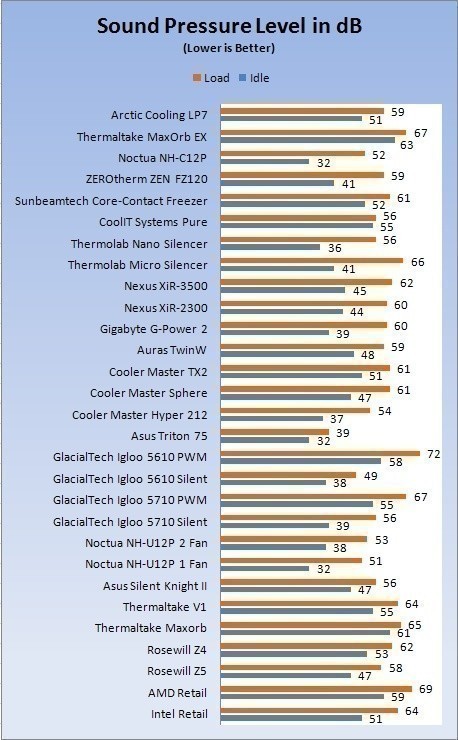 80mm fans are prone to being a little louder than 92 and 120mm fans since they have to spin faster to move the same amount of air as larger fans. Spinning faster produces more noise, but the 7 LP has a max speed of only 2000 RPMs. The Arctic Cooling Freezer 7 LP wasn't as loud as some of the other small coolers we have tested, but at full speed it is a little louder than we expected. Granted, it will be a rare occasion when the cooler would turn to full speed (via PWM) but if it should happen, you will hear it outside of the case up to two feet away.

I am impressed that we were able to get this much performance out of such a small heatsink. The Arctic Cooling Freezer 7 LP makes a great cooler for HTPC and slim case situations, just as it was intended.

The price of the cooler is spot on, just like the performance. At less than 30 US Dollars MSRP it would be difficult to recommend any other cooler that we have tested for a small enclosure. With Arctic Cooling's large retail and e-tail support it will be easy to locate the 7 LP when they are available.

The only thing I would like to see from Arctic Cooling with the 7 LP is support for AMD processors. HTPCs and small home servers are generally made from older computer parts and for many people their previous generation system was based on the AMD platform. 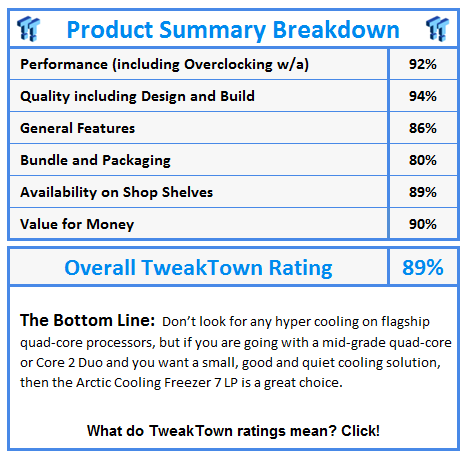