NewsReviewsArticlesGuidesGamingAsk the ExpertsNewsletterForums
TV, Movies & Home Theatre
Blu-ray Movies
A deadly virus has been unleashed on the planet. The infected are turned into flesh eating zombies. Sound familiar? Ok, plot wise 'Resident Evil: Extinction' isn't exactly ground breaking, but the film hits the ground running with such energy and style that all was forgiven within the first few minutes.

'Resident Evil: Extinction' is once again written by series mastermind Paul W.S. Anderson, but directed this time out by Russell Mulcahy of 'Highlander' fame. (Mulcahy started out directing film clips for artists such as Duran Duran, Elton John, The Rolling Stones, and pretty much anyone who was big in the eighties music scene)

This outing finds Alice (Milla Jovovich) still on the run from the evil Umbrella Corporation. While travelling across the desert in Nevada, she stumbles across a rag-tag group of fellow survivors of the deadly virus that has nearly destroyed the planet.

The group, in an effort to secure more fuel to continue their journey, head to Las Vegas, where they are attacked by a group of Zombies. Meanwhile, what remains of the Umbrella Corporation is trying to figure out how to contain the worldwide disaster they created.

Twisted evil genius Dr. Isaacs (Iain Glen) is experimenting on a new version of the T-virus, one which will allow Umbrella to domesticate the increasingly aggressive zombies still roaming the land. The key to that research, Isaacs believes, is in the DNA structure of the elusive Alice. 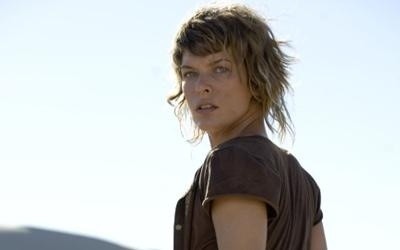 I've read a few complaints on the interwebs regarding an "overly soft / flat image quality" on this disc. I have to strongly disagree. 'Resident Evil: Extinction' sports a very sharp and well defined image. The movie has a deliberately bleached appearance to immerse the viewer in the harsh desert landscape, however colour reproduction is spot on, resulting in a lifelike image throughout. Black levels are also very good with small amounts of grain visible in a handful of scenes.

In the words of my favourite Kazakhstan journalist ..."very nice". 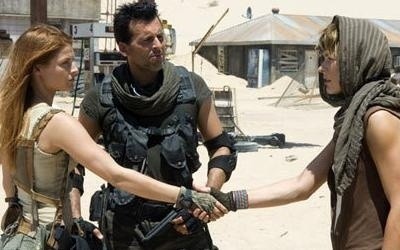 Unfortunately with my current set-up I'm not able to test the lossless Dolby TrueHD 5.1 soundtrack that's available on this disc. Bah !! The good news is the 'vanilla' Dolby Digital 5.1 track is very impressive. All your speakers will be put to the test with this punchy soundtrack. My surround channels were given a particularly good workout; the "zombie crows" sequence being the standout.

I was ducking while sitting on my couch (always a good sign). 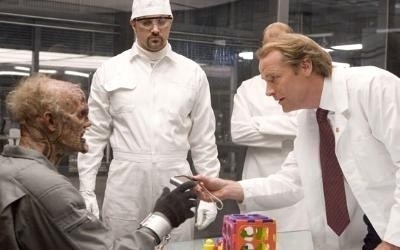 As far as I know, this is the first profile 1.1 disc to be released in Australia. Profile 1.1 allows Blu-ray players to decode secondary video and audio sources simultaneously to the main feature, which means you can play the feature and have special features popping up throughout with picture-in-picture. Pop up box content includes interviews, behind the scenes footage, storyboards and heaps more. The box moves around all four corners of the screen as the movie progresses. It's all very, very cool.

First up we have an audio commentary by Director Russell Mulcahy who is joined by writer/producer Paul Anderson and producer Jeremy Bolt. This is a pretty good track; it's jam packed with technical info on the film, but it can be a little dry at times. Unlike the first two movies, Milla doesn't appear on the commentary track. I for one missed her. She's delightfully crazy.

The main making of, titled "Beyond Raccoon City: Unearthing Resident Evil Extinction", is a four part documentary with a total runtime of 31 minutes. It covers pretty much everything you could want to know about the making of the film and is quite entertaining.

Next up is eleven deleted scenes of varying quality and trailers for Resident Evil: Degeneration ( the upcoming CG animated feature ), Resident Evil 5 video game, Devil May Cry 4 video game (the tentative link is that the game is also made by Capcom), Close Encounters of the Third Kind: 30th Anniversary Ultimate Edition and Vantage Point. 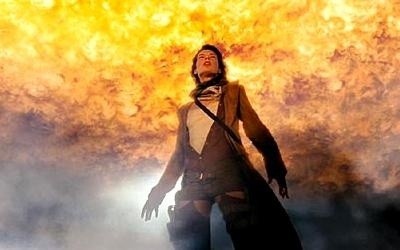 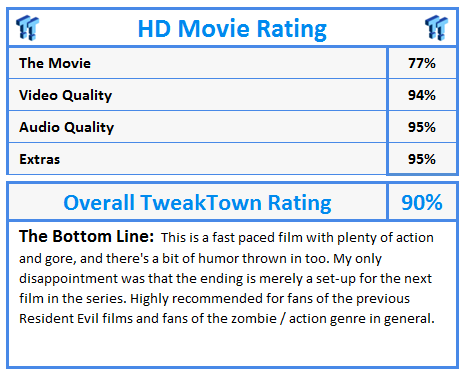