NewsReviewsArticlesGuidesGamingAsk the ExpertsNewsletterForums
TV, Movies & Home Theatre
Blu-ray Movies
Across the Universe is a tough film to nail down to a particular genre. It's part drama, part love story, part coming of age and almost all musical. Essentially the film is a live action Yellow Submarine; it uses 30 Beatles songs to tell a narrative of two young lovers, using the songs not just as a musical diversion, but to drive the story as well.

The story centers on Jude, a young shipyard worker in Liverpool. He travels to the United States to meet his father, whom has been absent for his entire life. But when he finally gets to meet him, he is not necessarily the man he expects. Soon after, he is introduced to the wayward Max and is invited to Thanksgiving at his wealthy parents home where he meets his beautiful sister, Lucy. This sets in motion the events of the film, set against the backdrop of the social upheaval of the 1960s.

The director Julie Taymor is a visionary genius, she was responsible for the Lion King Broadway show from a few years ago. She has an incredible eye for detail; every frame looks like a piece of art. She took a wise course and cast almost all her roles for unknown actors, and it really is quite refreshing. I particularly enjoyed the performance of Rachel Evan Wood - she will most definitely be going places in the next few years. But it kills me inside to know that she is dating Marilyn Manson and I don't want to think about it any longer.

Across the Universe is not a perfect film. Taymor revels a little too much in the excesses of her visuals and lets the story suffer a little. However, she has succeeded in crafting an extremely enjoyable film and has updated the almost antiquated idea of a musical, for a younger generation. 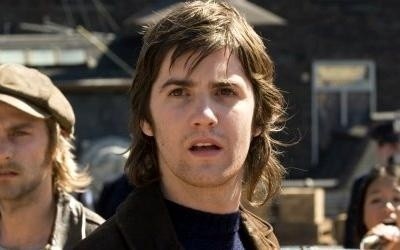 For such a recent film, you would expect that the picture quality would be near perfect. And I'm happy to report it is. Whilst it is one thing to have a technically brilliant transfer, it's nothing if it's not backed up by a beautiful looking film, which Across the Universe certainly is. Every colour, every bit of detail and every spec of the emulsion that makes up the motion picture is here, and it's a wonder to behold.

I literally don't have enough nice things to say about the quality on offer for this disc, it's a sight to behold, and it really makes reviewing that much easier!

Sony Pictures have dropped their previous audio codec of choice and gone with the equally as aurally pleasing, but space saving Dolby TrueHD codec.

After years of enduring PAL movies transferred to DVD, playing 4% faster (because of the formats 25 frames per second), it really is fantastic to be able to enjoy movies with a high content of music, especially musicals such as this film, now that Blu-ray and HD-DVD have seen the dissolution of PAL and NTSC as video standards.

Across the Universe sounds brilliant. For a movie so reliant on music to push the narrative, it was imperative that the soundtrack matches the visuals, and again the Blu-ray excels.

For a movie made during the HD era, it's nice to see that Sony have compiled a great Blu-ray release with a lot of value added material, and the majority of said material is also presented in HD. Let's jump in.

First off, we have an audio commentary by Director Julie Taymor and composer Elliot Goldenthal. The amount of detail that has gone into this is quite impressive, but I would have liked a little more back story on the painful delivery of the final cut of the film (a tense stand-off occurred between Sony execs and Taymor over the version of the film that was released in cinemas - in the end Taymor won).

Next we have a total of five featurettes; 'Creating the Universe', 'The Stars of Tomorrow', 'All about the Music', 'Moving Across the Universe' and 'The FX of the Universe'. Played together, this forms a 100 minute, mammoth 'making of' that delves into almost every aspect of the making of the film, and lets us in on some very revealing aspects of the film from the casting of the leads, to the recording sessions, to the non CGI, old school, practical effects.

Unfortunately, a gaping hole in the coverage is the year long editing process. This film was either going to be made, or broken, in the editing process. Fortunately it was the former, but I would have liked to have seen more information about the process of editing all the elements of the film, and making the songs fit. I have no doubt as to why this information is lacking, and I suspect that Taymor was hesitant to talk about the details due to the skirmish with Sony. But overall, this is a solid making of, and free from the traditional mutual back patting.

Next up is over half an hour of extended musical sequences; these do not include any new songs, just extensions to existing ones. These additions are very welcome, and for those pining for that little bit more to the film, it is nice to see these sequences in their whole, and presented in HD with 5.1 sound for good measure.

Next, we have one deleted scene, which lasts for a little over a minute. Some might say 'why bother', but I say it's nice to have a complete package.

And finally we have a stills gallery. Maybe this makes it a little too complete. I have never cared for stills galleries, however interestingly the disc has used BD Java to present them mixed with music, and giving you the choice of individual control, or presented as a slideshow.

Unfortunately, what has been overlooked in the package is the original theatrical trailer for the film, which while I admit did show just a little too much of the film, was an extremely well made trailer and piqued my interest very high. But viewers who are watching this Blu-ray from a PlayStation 3 can access the trailer (in 1080p HD) from the PlayStation Network. 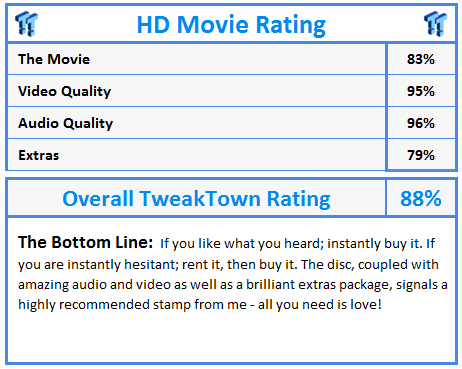 Across the Universe is a veritable feast for the eyes and an auditory gift, especially if you are lucky enough to be listening to the uncompressed Dolby soundtrack. The film itself, due to its content will probably divide, but I strongly suggest that readers try and track the film down if your local video shop stocks Blu-ray. At the very least, if you are struggling to find a Blu-ray that the significant other might want to watch, give it a go.