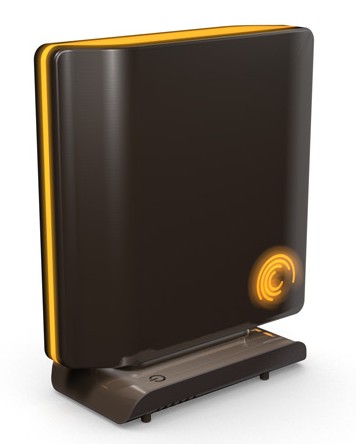 The old style of recording data within the PC remains today. Invented over thirty years ago, the hard disk; a magnetic storage device is still trusted to keep all our data stored for easy access. Originally starting at around 1MB capacity, hard disks have now grown to over 10,000 times as much, storing 1 Terabyte on the latest generation of drives. Why do we need so much?

Back when PC's were originally designed, they were pure business machines, no one ever thought of a PC as a multimedia station. Running simple business applications required a simple operating system and simplistic programs like Word. Today we use PC's for music, videos and much more. Multimedia storage takes up far more space than that of a simple word document; in order to store a worthwhile combination, drive spaces have had to increase to cope with this. Not only have file's sizes increased for multimedia, but gaming has changed to include HD movies requiring even more space. Even today's operating systems are extremely complex, thus requiring more space again.

While adding storage devices inside the system is good, there is a limit to the amount of space inside a case, and internal connectors are finite. External storage thanks to USB, Firewire and eSATA makes perfect sense, as the amount of devices you can connect is increased as well as moving the storage drive outside the case, in turn providing better PC cooling.

Today we are looking at a full storage solution from Seagate called the Freeagent Pro. How well does this baby stack up? Let's have a look. 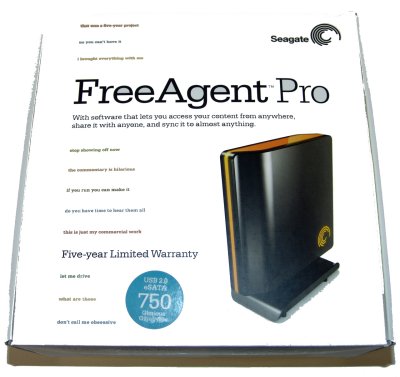 Seagate has focused its Freeagent Pro at the desktop segment market, with no expense spared. Seagate has done a good job on the package; the box the drive is shipped in is white with a full colour photo on the front along with some basic feature set info along with the size and interface supported. 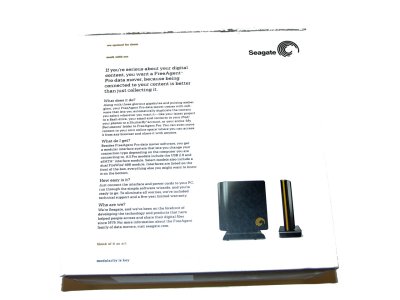 On the back there is another colour photo of the drive, but no useful info is included, just a bunch of marketing hype on the drive. 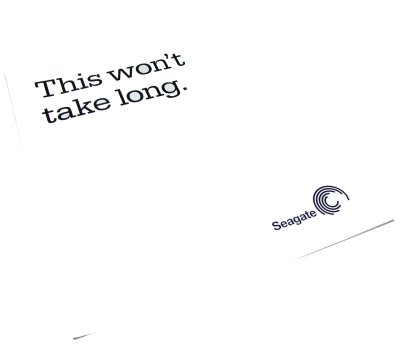 The documentation included in the box is very simple but effective, being a simple setup you only need to plug in the power and an interface cable, depending on what your drive comes with.

The cables and accessories included for our model were a power converter and a USB 2.0 cable. Our drive does support both USB and eSATA but no eSATA cable was included, a definite strike against the drive. If you have eSATA on your board and want to use the eSATA interface you're going to need to buy an extra cable. 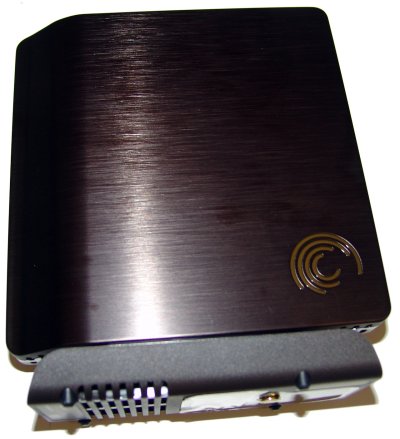 Now we come down to the drive. Seagate has enclosed the drive in a black casing with an interface module stand at the bottom. The Seagate logo on the drive along with the sides have an orange EL LED system inside. When the drive is successfully connected to the PC, these LEDs glow orange. 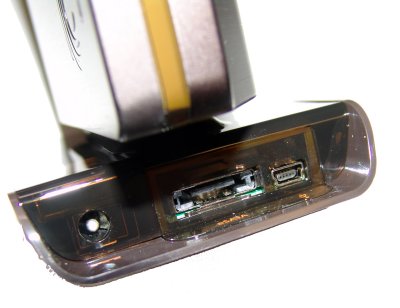 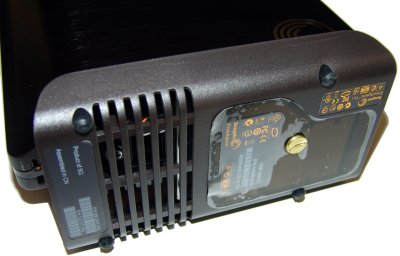 Seagate includes software on the drive when you install the unit to the system. Windows XP and Vista require no drivers for USB as the drive is detected as a Mass Storage Device like any USB flash drive or generic external HDD enclosure, and eSATA simply runs into a hot plug of the SATA ports, requiring no drivers whatsoever. The software that Seagate provides is a simple backup utility that you can customise to backup specific data at dedicated time intervals. This is a very handy feature, however if you're just wanting an external drive for movie storage like me, this software is kind of redundant.

Today we are using our motherboard test system to run our hard disk benchmarks. We are pitting the Freeagent Pro drive against our generic Blue Eye Gigasave combo converter with a Seagate 7200.10 250GB hard disk. Our combo converter has USB 2.0, Firewire-800 and eSATA interfaces on the back. We will be using them in all three interfaces along with the USB and eSATA interface on the Freeagent Pro.

Our first tests show that the Seagate Freeagent using eSATA is almost as fast as the internal HDD. The drive inside the Freeagent also seems to be faster than that of the one in our generic enclosure as it manages to outperform it slightly in eSATA mode.

Switching to USB caused the drive to nose dive in performance and was not able to make any headway against the Firewire 800 interface on the generic enclosure. 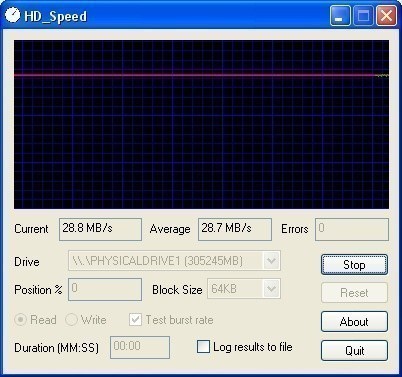 HD Speed shows the same trends as HD Tach. eSATA provides the best interface, with Firewire being the second choice. 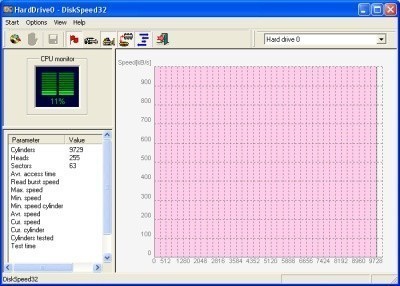 Drivespeed 32 also favours the Freeagent Pro drive with its eSATA interface. Using USB should be the last resort if you don't have eSATA, as the transfer rate drops dramatically.

Rather than have the system encode a file, we made some drastic changes to the movie file; we added in over 100 transitions, effects and so on. We then timed how long it took the system to render the changes while saving to each drive and interface.

Here you can see that eSATA is a definite must as USB simply doesn't have the bandwidth to do this. Firewire does help but still it is nowhere near the Freeagent Pro's eSATA interface.

There is simply no denying it, external storage is here and it's not going to go anywhere soon. The days of having 12+ drives in a single case are over. Not only does it take a huge amount of connectors that the PC doesn't have, but also adds to the amount of heat inside the case.

Hard Disks run quite warm, Western Digital's 10,000RPM Raptors run extremely hot in fact; that's why they have vents on the drive itself. External enclosures add no extra heat to the case, there is no cramping inside the case with extra drives, as you can simply sit it on your desktop or beside the PC, depending on what you prefer. Most drives use a USB interface, which is good for a basic storage system. Movies can be streamed to one or two PCs over a network using USB, but anymore than that you're going to need Firewire or eSATA.

Since the eSATA interface made its debut we have been extremely excited about this interface. Using the SATA transition protocol means it can run at 3Gbps outside of the case, making it as fast as the internal drive in fact. This is something that USB or Firewire can never hope to achieve.

Seagate's Freeagent pro drive is a definite must have if you're into large capacity storage. The drive sizes range from 320GB all the way to 750GB and soon Seagate will add a 1TB drive into the line up; and with the flexible option of the interface protocol and upgradeability to a new protocol in the future, along with its impressive performance scores, this is a hard product to go past. 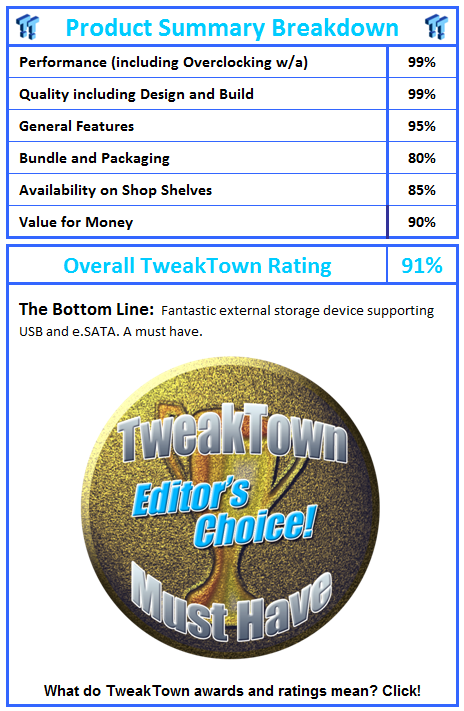