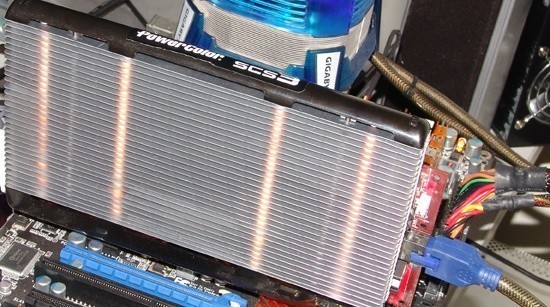 You would think that the Radeon X1950PRO would just about be discontinued, with the new mid-range graphics cards from Nvidia offering Direct X 10 and the HD 2600 just around the corner, why would you even bother looking at the AMD DX9 counterpart?

Well the new Nvidia cards come with an increased price tag and do not seem to offer the punch that the last generations do in DX 9 games. If you are not looking at jumping onto the DX 10 bandwagon straight away the X1950PRO and 7900GS are still very real examples of mid-range graphics cards you would consider buying.

The particular card we are looking at today is the SCS3 X1950PRO from PowerColor, which has a very well endowed heat sink on it allowing it to run silent. Because of this we do not expect the card to be a good overclocker, but we still want to test how the card performs at stock speeds. After all, you should not have to sacrifice performance just because you want a quiet system.

The particular sample we received did not come with a retail box so we will just move on to have a look at what comes in the package along with a quick look at the card before we get stuck straight into the benchmarking.

The Package and Card

With no box we simply dived straight into the package which on the whole is pretty light. Cable wise we have PCI Express power connector, component-out, S-video, RCA and VIVO. We have a quick install guide, driver CD, Cyberlink DVD solution CD and a bracket to go over your second port at the back of the PC if you decide to use it. 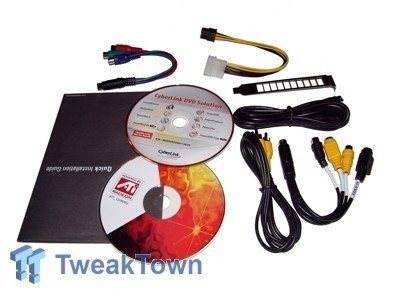 Checking out the card is a pretty quick process as well thanks to the mammoth heatsink on the front which manages to take up the whole card. The whole setup is a great design, though. 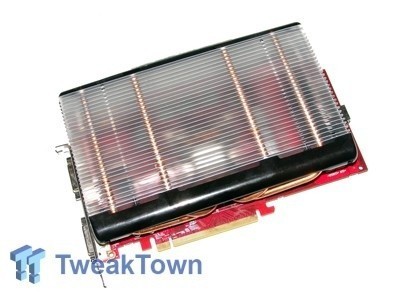 For starters we have four copper heat pipes that go from the core and head outwards and upwards through the aluminum fins. PowerColor have also gone to the effort to make sure that the memory is cooled with little BGA heat sinks. We can also see the VIVO chip on the bottom right of the card, which is a good little bonus. 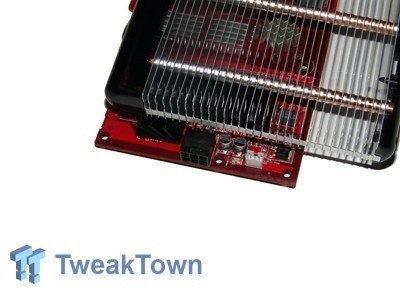 Like all X1950PRO cards we have our PCI Express power connector on the right of the card which is needed for the card to run. 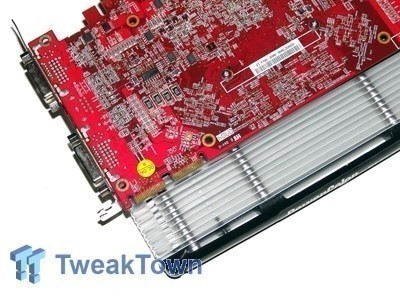 Turning the card over its all pretty blank though up at the top we have our CrossFire connectors. However, you have to make note that, with this design, you are not going to be having much luck with CrossFire. The cooler well and truly shoots up above the card making it impossible to use two of these in a CrossFire setup. 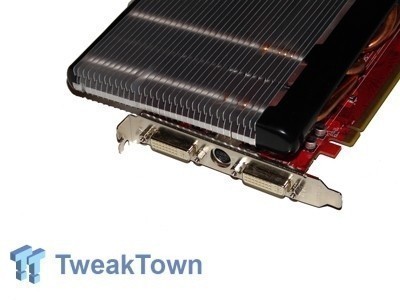 I/O wise is pretty standard as well, two dual-link DVI connectors, along with out TV-out port which of course can also accept an incoming signal thanks to the presence of the Rage Theater chip.

While the package is a bit light the card quality really makes up for it; VIVO, silent, well designed and excellent quality make it a really standout card. Clocks are standard coming in at 575MHz core and 1380MHz DDR memory.


With a GeForce 8600GTS in hand which should be priced similar to the SCS variant of the X1950PRO, it was time to get our test on.

We say "should" due to the fact that the SCS version of the X1950PRO is currently not available in Australia, the average X1950PRO 256MB is around AU$230 and the 8600GTS is closer to AU$260 so adding another AU$30 to a standard X1950PRO should cover our bases for the new heatsink and fan.

Well let us not ramble on anymore and find out how the SCS3 X1950PRO from PowerColor fairs against the 8600GTS from Palit today.

We can see that at the lower resolution the new 8600GTS has a considerable lead but as soon as we start placing more pressure on the graphics cards the tides turn and we see the X1950PRO sneak ahead in both of our higher resolution tests.

Across the board we have the X1950PRO leading the way, especially in our non-HDR tests.

Prey was a bit weird with the X1950PRO being the best card at the lower resolution while the 8600GTS kicked back in the higher, we can put this down to the OpenGL optimization that Nvidia has.

We see that the 8600GTS was slightly faster at the minimum FPS while overall the X1950PRO was faster on the average thanks to it hitting higher frame rates. With that said though the minimum is more important and you would have to say the 8600GTS won out here.

AMD has placed a lot of time into the optimization of COH and it really shows here, the X1950PRO manages to slaughter the 8600GTS. We would need to use dental records to identify the remains of the poor Nvidia card after this massacre.

Our high quality tests let us separate the men from the boys and the ladies from the girls. If the cards were not struggling before they will start to now.

We can again see that at the lower resolution that the 8600GTS is in front though it is by such a small margin this time around.

We leave with pretty much a dead heat with both cards performing within 1/2 an FPS of each other.

The Radeon X1950PRO really took some time to establish itself as a serious player. Initially, it seemed that the card was just a typical "let's release something for the hell of it" product but with price drops and new drivers it has grown up nicely. We just have to hope that AMD do not stuff it all up by releasing the HD2600 series with a high price tag and poor performance.

This particular incarnation has a fair bit going for it as well. It is silent, which is always a good thing, and it is not one of those silent X1300s, it is actually a card you can game with. PowerColor also offers VIVO, which seems to be showing up less and less on graphics cards these days, which means that this would be a good card for a home theater PC (HTPC) setup where it would allow you to have a nice quiet system that also lets you play games.

The design of the card does mean CrossFire dual graphics is out of the question and while it is technically a con, clearly PowerColor knows that the chances of someone using CrossFire period, let alone on two of these cards is not a big deal, we cannot see it being a problem.

This is one of the better versions of the X1950PRO and the silent design works well. However, with a setup like this you normally have to trade off overclock ability, but if you only want to run at stock speeds the card performs just as well as all those other models with noisy spinning fans. We tried some OC but did not get far at all.

PowerColor have done a great job with the card with the only real gripe being the lack of an included game, which is disappointing as the company has bundled some fantastic games in the past. Come on PowerColor give us a new game - otherwise it is a product to take into consideration, as long as DX10 is not a requirement for you.